If you want a neutral sound signature at a low price, then the Sennheiser HD 598SE won’t disappoint.

In 2011, Sennheiser released the original HD598 open-back headphones and then after a few years, they released the HD 598SE. The only difference between the two is the inclusion of the 6 feet long 3.5mm cable along with the 10 feet long ¼ inch cable.

I’ve had the Sennheiser HD 598SE for about a year and have listened to them for a total time of at least 400 hours. I’ve used them mostly every day during this time period to listen to all genres of songs (rock, EDM, pop, movie soundtracks, Western classics, etc.).

The thing that really drew me towards these headphones were its soundstage, flat signature, and price. See, when I bought them, it was on sale and I got it for a great deal. Also, a wide soundstage is required for any proper gamer so that they can pinpoint where the footsteps or the gunshots are coming from. But enough about my ramblings, let’s get on with the review, shall we?

Don’t want to read the full review? Here’s the takeaway:

If a neutral sound signature is what you require, then at less than $200, these won’t disappoint you.

Now, on to the main review.

For a sub $200 pair of headphones, I really expected more accessories. The packaging is really very basic in every standard. I definitely expected to have at least a carrying case along with these headphones. Even though they are not meant for traveling, I will prefer to keep it in a case than leaving it out in the open.

Upon opening the box, you will see the headphones themselves, the ¼ inch cable and the ¼ inch to 3.5mm adapter.

Stowed beneath the plastic box is the 3.5mm cable.

Overall, the packaging is very uninspiring and bare-bones.

The headphones are fully made of plastic with the exception of the metal grilles. They feel okay but not super premium, to say the least. There is no creaking on the hinges and the headband cushion is really good. I had feared earlier that the fake leather on the headband will peel off after a few months, but as of now, there has been not a single issue in that department.

Also, the ear pads are made of velour and have a nice feel to them. They are also replaceable. The headband adjuster is also very sturdy and I don’t think it will get damaged anytime soon. So, I would say the build quality is quite good.

But this comfort comes at a cost. They are very loose on the head. This is because the clamping force on these headphones is so low that it makes them both comfortable and fit very lightly on the head. In fact, once I had sneezed very hard and the headphones came flying off of my head!

Also, since these are open-back headphones, they have very minimal sound isolation. Only if you crank up the volume, then will you get the perfect isolation. But that too comes at the cost of sound leakage. They don’t leak like hell. But people will still be able to hear it on a crowded bus if you crank up the volume too much. It happened to me and I got told off by a lady!

Now, on to the most subjective part of the review: sound. Also, I won’t be posting any graphs in this review, as I don’t believe in graphs as much as I believe in my ears! 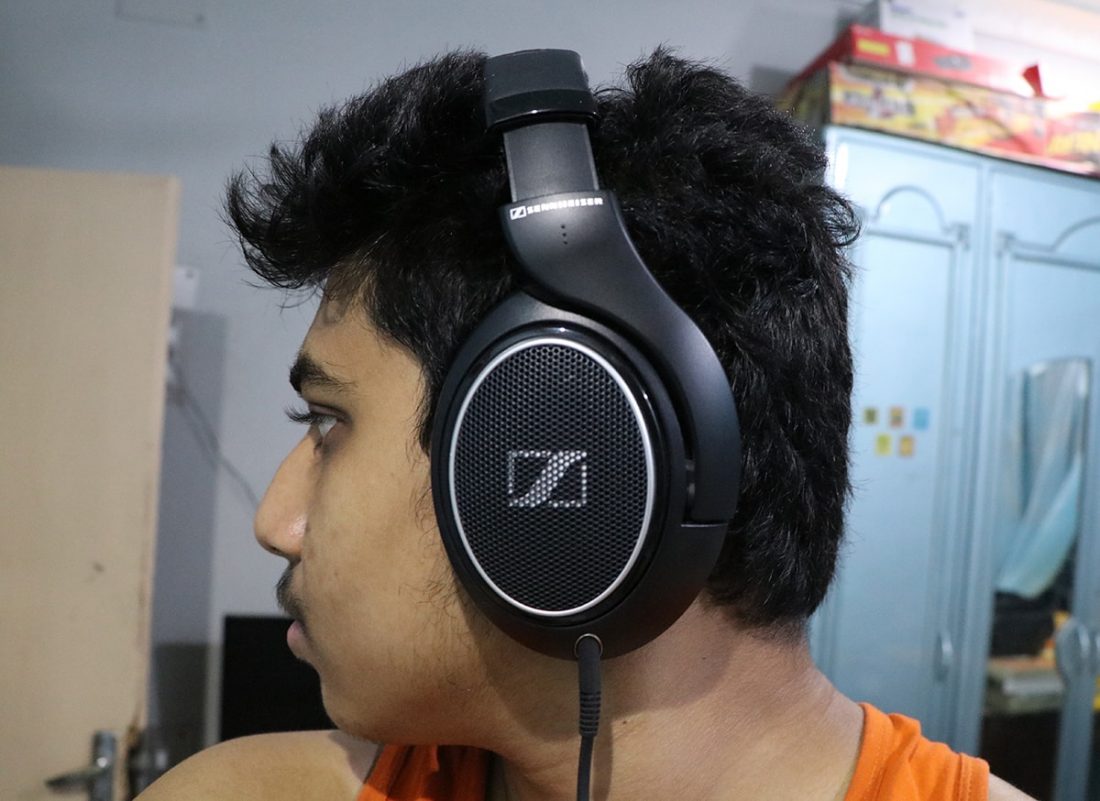 This time, I’ll be listening to the headphones via 3 modes:

Now, let me give you a small tip.

If you plan on purchasing these headphones or any other high-end headphones for that matter, I suggest you get a good DAC/AMP to go with it. It will go a long way to make your listening experience much more enjoyable.

The bass in these headphones is very neutral and flat. It is fast paced but not that tight and dynamic and it doesn’t have that slam which it should’ve had in the first place (basically, there is not a lot of “oomph” in the low end). But the bass extension is really good. Genres like EDM, pop will not shine on these babies if you don’t own a dark sounding amp.

The bass in these headphones is really flat and boring until you pair it with a dark amp.

To get more bass from it, I will suggest getting an amplifier which has a dark sound signature or an amp with a bass boost switch like my Fiio Q1 amp. After turning the bass boost on did I get a full-bodied bass out of these cans. So, in my opinion, the bass is somewhat boring on these headphones without an amp.

The mids in these headphones sound natural and lifelike. Since they are open-back headphones, the vocals sound very airy and it feels as if you are listening to a live performance than sitting in the bedroom, listening to your favorite tracks. The male vocals have that depth in them that makes them sound very good and female vocals are energetic and airy.

The mids are natural and full-bodied unlike their flat bass response.

The vocals and the instruments get nicely separated even in busy tracks and you will be able to hear every little nuance in your songs with ease. So, I think they do a good job in the mids department.

The treble is the strongest suit in the HD 598SE’s armory. It is very energetic without the slightest hint of sibilance. Guitars sound really nice and natural on these headphones. I have listened to them in 100% volume in high gain on my new Hiby R3 and they did not distort in the slightest (although I wouldn’t recommend doing that unless you want a permanent hearing damage). The cymbal crashes sound accurate and has a good decay without sounding splashy.

The treble extends very well in these headphones and everything sounds very clean without being shouty and in your face. Hence, I think that the treble is the best part of these headphones.

Now, soundstage. Since these are open-back headsets, they sound very expansive.

Now, I have tried a few open-back headphones like the Beyerdynamic DT990 Pro, Sennheiser HD 650, etc. and among all of these, the HD 598SE has the widest and deepest soundstage of them all. But the soundstage is not as accurate as, say, the HD 650.

The imaging and separation on these headphones are great for their price. You can hear the guitarist in Led Zeppelin’s “Stairway to Heaven” playing on your left and the mellotron playing on the right with very nice detail. Also, as I had said previously, there is no distortion at the highest volume at high gain in all of my test devices which are Fiio Q1, Hiby R3, and Cayin N3. So, I don’t think you are going to face any problems in this department!

You will be able to drive them out of a smartphone but a proper Digital Audio Player (DAP) or a DAC/AMP is highly recommended to get the best out of these cans. They have an impedance rating of 50Ω and a sensitivity of 112dB so, I don’t think you will face a lot of difficulties while driving them out of your smartphones.

At sub $200, I expected something great from these headphones and I think that they have delivered on that part. The sound signature is neutral but adds a bit of a soul to the songs so that it sounds just the way it should sound.

Only the bass is a bit boring on these headphones which can be disappointing to some but, as I said, this can be easily fixed with an amp which has a dark sound signature. So, overall, I think the HD 598SE provides good value for the money it takes.