If you want bass on a budget, then get the RHA MA390. Otherwise, there are better alternatives out there.

Reid Heath Acoustics (RHA) was founded by Reid Heath in 2011. Since then, they have been making high-quality audio products and one of them is the RHA MA390u (u for universal). MA390u is the entry-level model in their MA series of earphones. But does it have a sound which is beyond its price point? Let’s find out in this review for the RHA MA390u.

I’ve used the RHA MA390u for about 4 months and have listened to them for at least a total time of 60-70 hours using various genres of soundtracks in which I have got a pretty good impression about the earphones. Also, before trying them out, I have burned them in for about 50 hours using pink and white noise.

If you are not interested to read the full review, here is the early verdict from me:

If you love bass but have a tight budget, then these are the best that you can get at this price.

Also, if you must know, I had bought these as my backup pair of earphones in case my daily drivers were screwed. But now, I am looking to sell these off. “Why?” You might ask. Well, you need to read the full review in order for me to answer that question.

But first, a quick disclaimer: I had purchased the RHA MA390u with my own money. I have not been incentivised by RHA to write the review and I am doing this on my own accord.

So, now that we got that out of the way, let’s get on with the main review, shall we?

At a $30 price point, I really could not expect any more accessories included with the earphones. 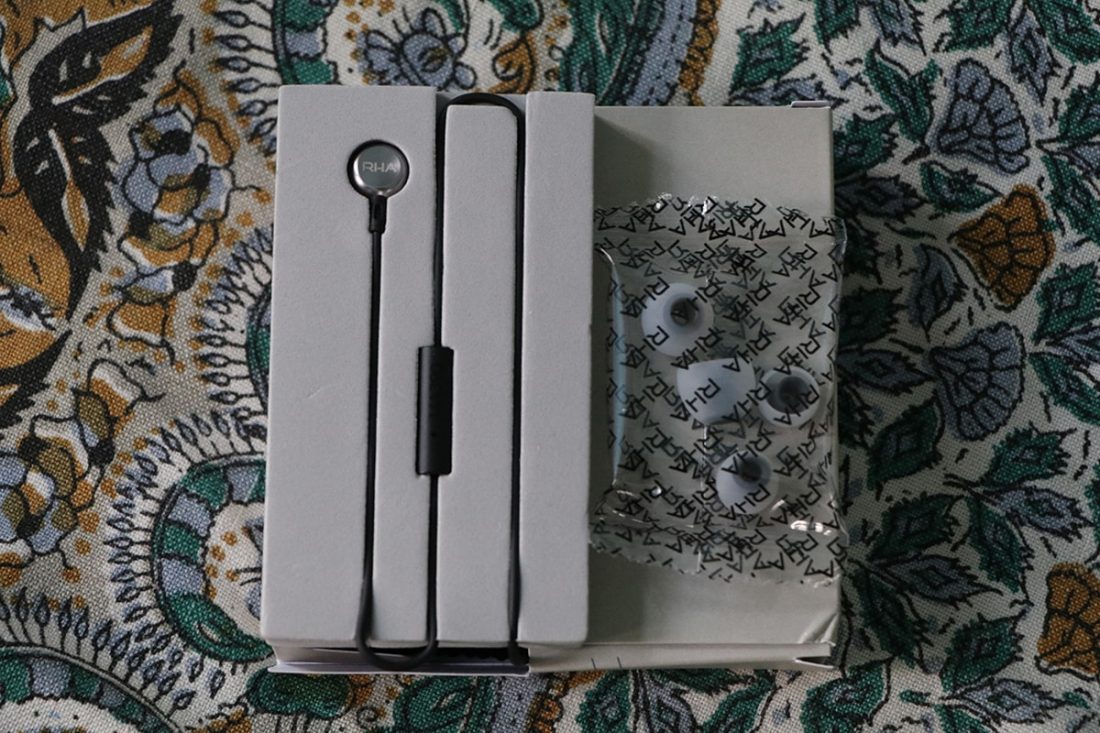 Upon opening the box, you will be greeted by the earphones and the pack of ear tips

So, to summarise, here is the list of all the accessories it comes with:

So, the packaging is mostly nice for a $30 pair of earphones and I really cannot ask for more at this price point.

As with all RHA products, the build quality of their earphones is way above their price point (read RHA T20i review) and this one is no exception. The body is made of aluminum, a rare exception in the $30 budget. Also, it feels really premium for its price. The microphone is made of high-grade plastic and has a nice click in it which I really dig.

The build quality is exceptional for its price point.

Also, the cable below the y-split is quite thick and braided. The y-split too is made of a high-quality rubber and it never feels as if the cable is going to get ripped apart. The 3.5mm headphone jack is gold plated, so as to prevent corrosion. Overall, the build quality is very impressive at this price point. Thumbs up to RHA for this.

Since they are worn cable down, I don’t think you guys will have too much of a problem regarding the fit. In fact, the stock medium-sized tip fits me quite perfectly and I experience no discomfort even after a continuous 2 hr usage. Basically, comfort is great on these earphones.

In terms of fit, it is quite snug with the provided tips. Another part well done by RHA on these earphones!

Now, the noise isolation on these earphones are well above average. I would say that if you use it inside a crowded bus at 50% volume, then you shouldn’t be able to hear any outside noise whatsoever. I think it provides about the same level of noise isolation as my LZ A4, i.e., about 10dB of isolation.

Now, the thing you have all been waiting for: Sound Quality. Here you will get to know why I sold these earphones. Basically, they have a warm and bassy sound and overall, it has a classic v-shaped sound signature. This means that the bass and the highs are boosted and the mids are recessed, making vocals sound distant. Whatever tuning RHA has made on these earphones is really not up to my liking. 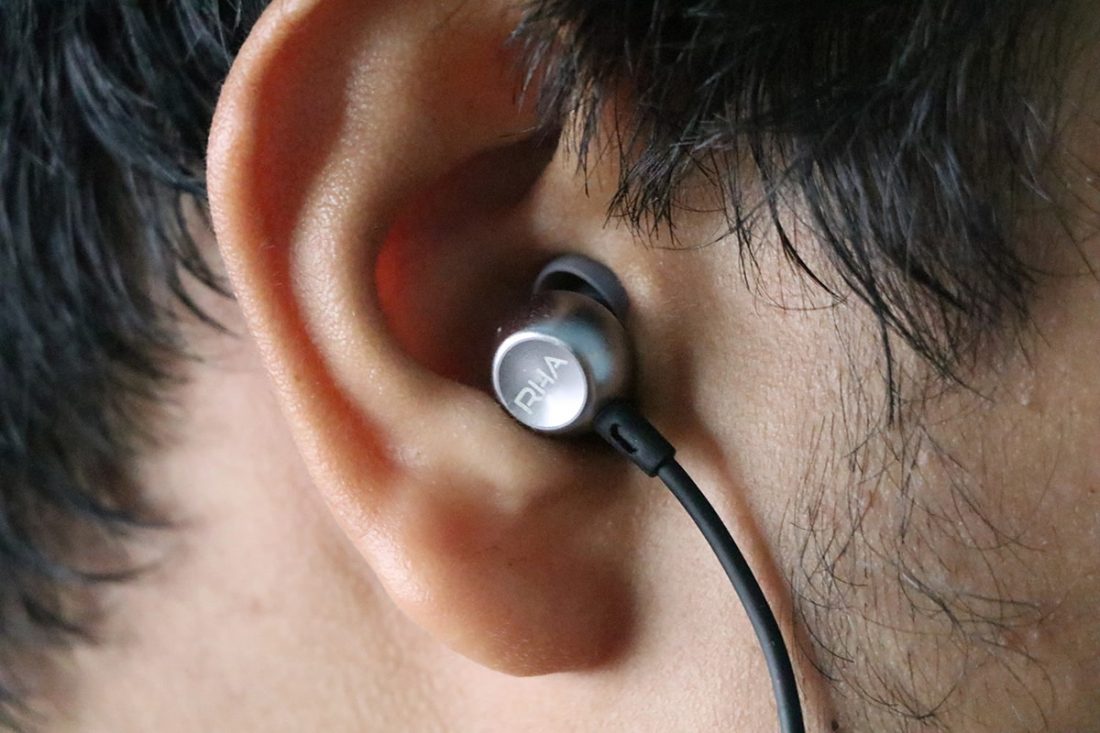 Now, bass is the most dominant part of its frequency response. It is very full-bodied and has quite a bit of impact, but it is not that fast-paced. Also, it tends to bleed into the mid frequencies in some songs like Taylor Swift – Bad Blood. That song has a part where there are both vocals and heavy bass in the background. I found that the vocals often get drowned out by the bass frequency.

This is the part which I hate the most about these earphones. The bass also sounds a bit boomy at times but never harsh. The sub-bass on these earphones literally rumble and genres like EDM and Pop really popped out (pun intended) but it is unsuitable for other kinds of soundtracks.

The mids are laid back because as I said, they have a v-shaped sound signature with its main priority towards bass. Vocals sound somewhat veiled behind the bass and they sound distant. But the vocals have a bit of energy which gives them some life.

The mids are pushed back to make space for the bass.

I would say that the male vocals are given more priority than female vocals and due to this, they sound a tad bit more forward than their female counterparts. But, I have noticed that in some busy tracks, the separation between instruments gets reduced and they sound muddled up. But I guess it is expected at this price point.

The treble is boosted in the MA390u but not as much as the bass response. The treble has a nice energy to it and does not sound sibilant in any way. But in some tracks, the hi-hats and cymbals may sound splashy and may not decay very well. Also, I have listened to them in full volume on my Hiby R3 at high gain (don’t try this at home, seriously, I did it for only about 10 seconds before I yanked them out of my ears) and the distortion was minimal.

The treble extension is good if not great but at high volumes, it may sound harsh and a tad bit towards your face. But due to the heavy bass on these earphones, it doesn’t sound that fatiguing even at high volumes. The treble also lacks a bit of resolution that I had found in some other earphones at this price point.

Now, the soundstage is not especially wide. They are an intimate pair of earphones, to say the least. This means that everything will sound closer to you than they should and you will feel as if the track is being played right in front of you.

I have tried quite a few busy tracks on these earphones like Richard Wagner – The Ride of The Valkyries and Beethoven – Symphony No. 5 and I have come to the conclusion that they lose some of the grip on the songs when a lot of instruments are played. So basically, its separation is not that good and instruments get congested in busy tracks such as the above orchestras. But in normal tracks, these perform fairly well without any hiccups.

I tested its imaging using the same tracks that I used for the separation tests. Since it loses some of its dynamism in these busy tracks, it loses some of its details. But in other tracks which is comparatively less busy than these orchestras, the earphones have no problem in rendering the details out properly sans the micro details which can only be retrieved using high-end IEMs. So, imaging is better than average in these earphones.

The earphones can be easily driven out of most smartphones as it is very efficient at an impedance rating of only 16Ω and a sensitivity rating of 89dB. I have driven it out of my iPod Touch 6G and it ran perfectly without any issues. So, I don’t think that drivability should be a concern when you are purchasing these earphones.

This comparison is going to be very one-sided. This is because (spoiler alert!) the VE Monk+ sound waaaaaaaaaaay better than the RHA MA390u at 1/6th of its price point costing at around $5. You will really be shocked as how someone can create such a great pair of earbuds (not earphones mind you!) at such a cheap price! (if you want to know in detail about how great it sounds, check out this review here).

Also, I don’t think that since I am speaking so highly of the VE Monk+ that I have been paid by someone to say this. No sir! These really are a great pair of earbuds and I highly recommend that you try them out.

Now, here I’ll be making the comparison a bit easier to read by indicating the superior earphone/earbuds with “<” or “>” or “=” (when they’re equal). So here we go!

So, as you can see, the VE Monk+ is better in every aspect to the RHA MA390u except for probably its bass and overall build. But I personally think that making the overall build better than making it sound good is as useless as trying to write using a pen without removing its cap.

At $30, these earphones sound good, just not great. If you want a balanced pair of earphones on a budget, then I would suggest you to take a look at the VE Monk+ or other budget IEMs. But if you like bass and want loads of thump in your EDM soundtrack then these should be right up your alley.

Overall, I like them but not overly so just because of its bass response and I feel if RHA could fix that, then these could be a much better pair of earphones.