At $150, these are by far, the best pair of headphones that you can get, period.

A company like Sennheiser needs no introduction. So, instead of telling you guys about the company, I will tell you why these headphones were created and why am I so excited to get these. In the year of 1991, a guy named Axel Grell had joined Sennheiser and he had created the headphones that had basically the first generation of the legendary 6xx series of Sennheiser, i.e., the HD 580 Precision.

Then after a few years he launched the HD 580 Jubilee which was basically a HD 600 and then later on released the HD 650, which even to this date, is used as a benchmarking tool for all other headphones.

But where does the HD 58X Jubilee fit in all this? This headphone is actually a collaboration between Massdrop and Sennheiser to actually bring back the old HD 580 which had started it all and this headphone has been tuned by Axel Grell himself!

I’ve had the Sennheiser HD 58X Jubilee for about a month now and have listened to them for a total time of at least 40 hours and have burned them continuously for 30 hours. I’ve used them mostly daily during this time period to listen to all genres of songs (rock, EDM, pop, movie soundtracks, Western classics, etc.).

Don’t want to read the full review? Here’s the takeaway:

At the price of $150, there is nothing that comes close to it in terms of sound quality.

But wait! Before you dive into the review, I have a quick disclaimer for you: I have bought these headphones from Massdrop with my own money and I have not been incentivized or pressurized by Massdrop OR Sennheiser to write this review for them. All the words used in this review are my own and this review is written in the most unbiased way that I could have done.

Now, on to the main review.

Even though they are a $150 pair of headphones, I honestly expected a bit more accessories. The packaging is basic in every standard, although a tad bit more premium feeling than their own HD 598SE. I anticipate it to have at least a carrying case along with these headphones. Even though I won’t be taking them outside of my apartment, still I will rather have it inside a case than it rolling around on the floor!

Upon opening the box, you will see the headphones themselves and the 3.5mm cable.

Stowed beneath the plastic box is the 3.5mm to ¼ inch adapter.

So, to summarize, in the box, you’ll get:

So, basically, the packaging is again basic just like the HD 598SE.

The build quality of the headphones is excellent for its price, even though it is made fully out of plastic except for the headband size adjuster and the large grilles which are made of steel. To be honest, there is nothing much to say about its build quality. It feels rigid in the hand and it can flex to a degree which is great!

Again, like the HD 598SE, the ear pads are made of velour but this time, the pads are a bit harder, unlike the HD 598SE, which were much softer. But overall, these feel sturdy and I think it can take a few numbers of drops and remain as it was before it was dropped!

Well, compared to the HD 598SE, these are a bit less comfortable. I mean, as a reference, the HD 598SE feels like a soft woolly muffler wrapped around your ears and these feel like 2 cups strapped to your head. Also, when you are using these headphones for the first time, you might experience pain on your temple like I did. This is because, the headphones have a tight fit around your ears. But after a few weeks, as you continue to use the headphones, the headband will loosen up a bit and it will feel more comfortable on your ears.

Now, even though these are open-back headphones, they don’t leak as much as the HD 598SE does, but still at full volume, people on a crowded bus will easily tell which song is being played.

Also, if you are looking for sound isolation, then look elsewhere because they let in outside noise due to those open grilles on both sides of the headphones to make you feel the sound is coming from the whole environment and not just from the headphones themselves. These are strictly for indoor usage.

Now, on to the most subjective part of the review: sound. Also, I won’t be posting any graphs in this review, as I don’t believe in graphs as much as I believe in my ears! 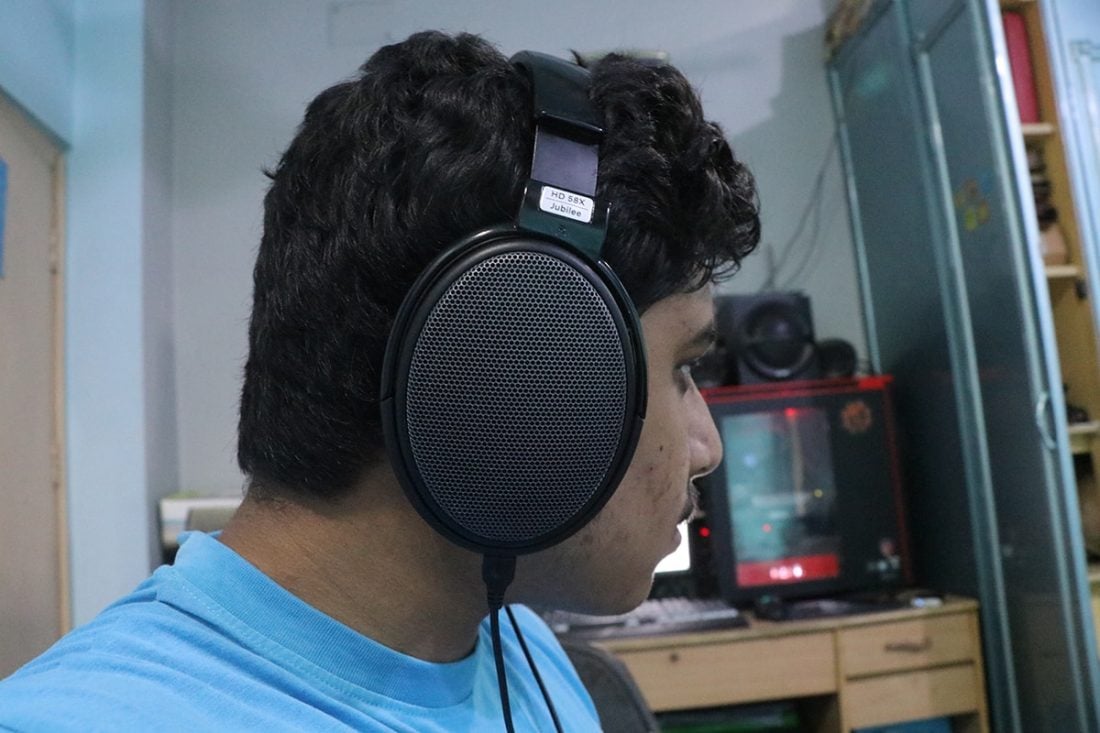 Now, let me give you a small tip.

If you plan on purchasing these headphones or any other high-end headphones for that matter, I suggest you get a good DAC/AMP to go with it. It will go a long way to make your listening experience much more enjoyable.

Remember when I told you in the HD 598SE’s review that those had one of the most boring and flat sounding bass? Well, these headphones are just the reverse…. They have bass that can bring a smile to anyone’s face from a hardcore bass head to a proper audiophile.

These headphones have one of the best sounding bass that I have heard from a pair of open-back headphones at this price point! I have checked with Beyerdynamic DT880 Pro, DT990 Pro, HD 650/6XX (this one has a deep bass, but it decays a bit slower than the HD 58X), Audio Technica ATH-M50X (not a fair comparison to be honest) and none of them had bass like this one had.

The bass in these headphones is one of the best, if not THE best I have heard from any pair of headphones at this price!

It is tight, fast-paced, energetic and the best part is it does all that without bleeding into the mids. Plus, the rumble of the bass on these headphones are just incredible! Sennheiser has done an extraordinary job on tuning these headphones.

Sennheiser has done a splendid job in the mids’ department! After listening to these headphones did I realize my old HD 598SE actually had the classic veil that Sennheiser was known and sometimes despised for. These headphones have much more full-bodied mids than the HD 598SE and even though these have more forward mids than the HD 598SE, they never felt shouty and too much “in your face”.

The mids are just perfect on these headphones. I literally couldn’t ask more at this price point.

People might seem to think after reading the bass part that there might be some issue with the mids of these headphones. Believe me when I say this: the sound signature is balanced (W-shaped in my opinion) with a slight priority towards the bass. The male voices sound best on these headphones as they tend to be a bit warmer than the female voices.

Both male and female voices in “Marvin Gaye” by Charlie Puth were easily distinguishable with both the female and male voice getting equal priority. Ed Sheeran’s “Perfect” literally sounds perfect on these headphones with the guitars positioned in the left and Ed seemingly singing and pouring his heart out beside me! Again, in Sigrid’s “Everybody Knows”, Sigrid’s voice sounds so mellow and soft with the piano in the background playing a dark note with the occasional drum beats, the song was taken to a whole new level! So again, full marks received by Sennheiser in the mids’ department.

I don’t know what magic Sennheiser has done on the HD 58X but even the treble sounds simply awesome! Let’s start with those cymbals and hi-hats. They have great energy and decays very quickly and they never sound splashy (meaning the sound does not spread and stays in its place). Then comes guitar. Man, I simply love musics which only have a single acoustic guitar playing. Those are the best type of soundtracks to test a headphones’ capabilities.

With these headphones, you can hear the squeak of the guitar string in the greatest fidelity as the guitarist changes the chord. It’s already getting difficult describing the quality of sound these pair of headphones produce. The guitar strings sounds natural to say the least and extension of the sound of the strings is just great.

Also, as you might have already guessed, there isn’t the slightest hint of sibilance in most of the songs. Only in the most sibilant tracks did I get to hear that familiar hiss when the vocalist is pronouncing the “s”. Again, Sennheiser has killed it in the treble department. I am honestly not making this up, but these literally are an all-rounder pair of headphones! 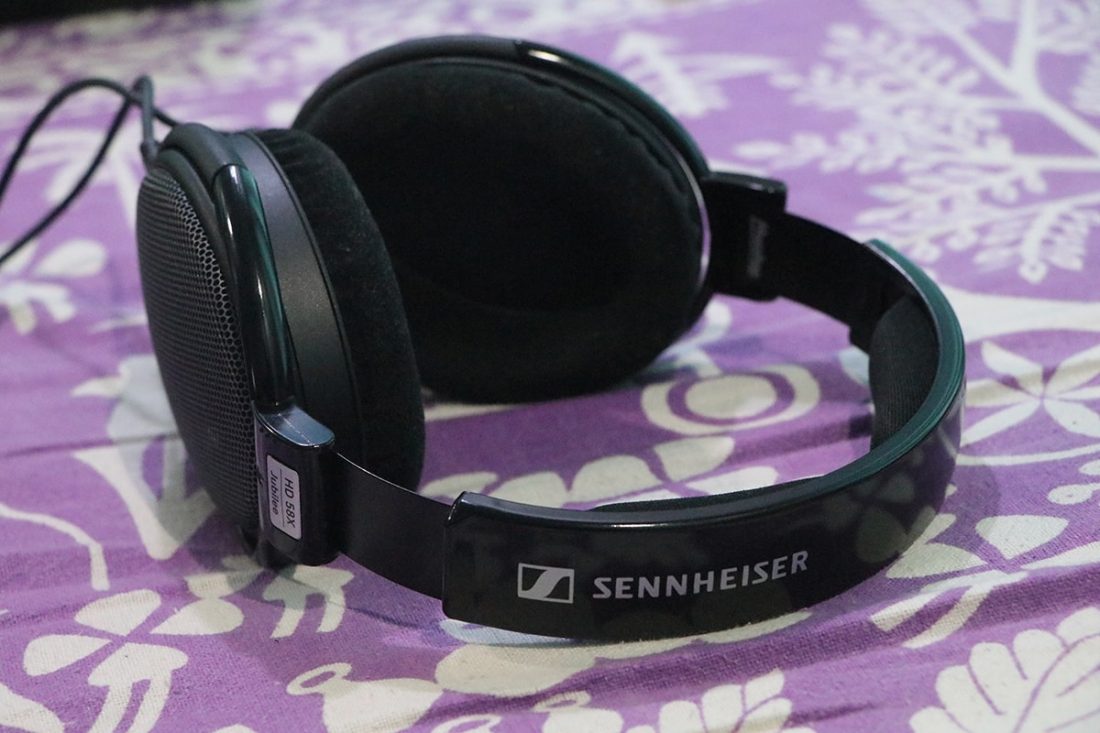 Now, there are 2 ways to accurately measure a headphones’ soundstage. First, is to use well-recorded binaural tracks (see track list below for more info). The second method (which I personally prefer more) is gaming. I have used two games specifically for this purpose. One is the well known CS:GO and the other is Hellblade: Senua’s Sacrifice (the latter is a much more immersive experience).

Now, soundstage. Even though these are open-back headsets, they didn’t give me that same “wow” factor I had got when I had first tried the HD 598SE. This is simply because, these do not have as wide a soundstage as the HD 598SE. But on closer inspection, I noticed these were much accurate in their representation. In Senua’s Sacrifice, there are voices whispering in your ears. Sometimes, in the HD 598SE, I felt the voices were all over the place. But in these, I could pinpoint the source of the voice. The same goes for CS:GO. When someone shoots at say my left, I could guess where they are accurately with these headphones.

I have compared these headphones’ soundstage (in fact the total sound) with 4 other headphones namely, Sennheiser’s own HD 650, Beyerdynamic DT990 Pro 250ohm and the HD 598SE. You can check it out in the comparison section of this review. For now, to sum it up in brief, I will say that even though they are not as wide as the HD 598SE they are as accurate as the HD 650.

(b) Imaging and Separation

The imaging and separation on these headphones are exceptional for its price. As a reference, its as detailed as the HD 650 except for a few micro details which I found somewhat hard to detect on these headphones but they were literally non-existent on the HD 598SE. As far as separation goes, I tried my level best to get it confused in busy tracks like the Fifth Symphony by Ludwig Von Beethoven, Richard Wagner’s “Rise Of The Valkyrie” but it handled those songs like a champ. Literally, I am yet to find a flaw which annoys me on these headphones.

You may drive them out of a smartphone but only barely. A proper Digital Audio Player (DAP) or a DAC/AMP is definitely required to get the most out of these headphones. They have an impedance rating of 150Ω and a sensitivity of 104dB so, you might face a bit of difficulty while driving them out of your smartphones. Since these already packs a bit of punch in the bass department, I would suggest you to pair it with a neutral DAC/AMP like the Fiio Q5, Chord Mojo, etc.

At $150, I had a high expectation from the HD 58X. But after I tried them personally, only these 3 words came to my mind, “Oh my god”! I mean for $150, you are getting solid bass, forward and energetic mids and top-notch treble performance. It easily goes toe to toe with its older sibling, the HD 650 and there literally is no other pair of headphones that can come close to the sound fidelity it provides. So, I am bestowing upon the HD 58X, The Best Headphones under $200!