I have to be honest up front. I tend to use headphones for most of my music listening these days. When Burson gave me the opportunity to review their Bang Power Amp I must admit I wondered whether my humble loudspeaker system would be up to the task of showing off any improvements in the audio chain. But then I thought – what the hell, let’s give it a try. 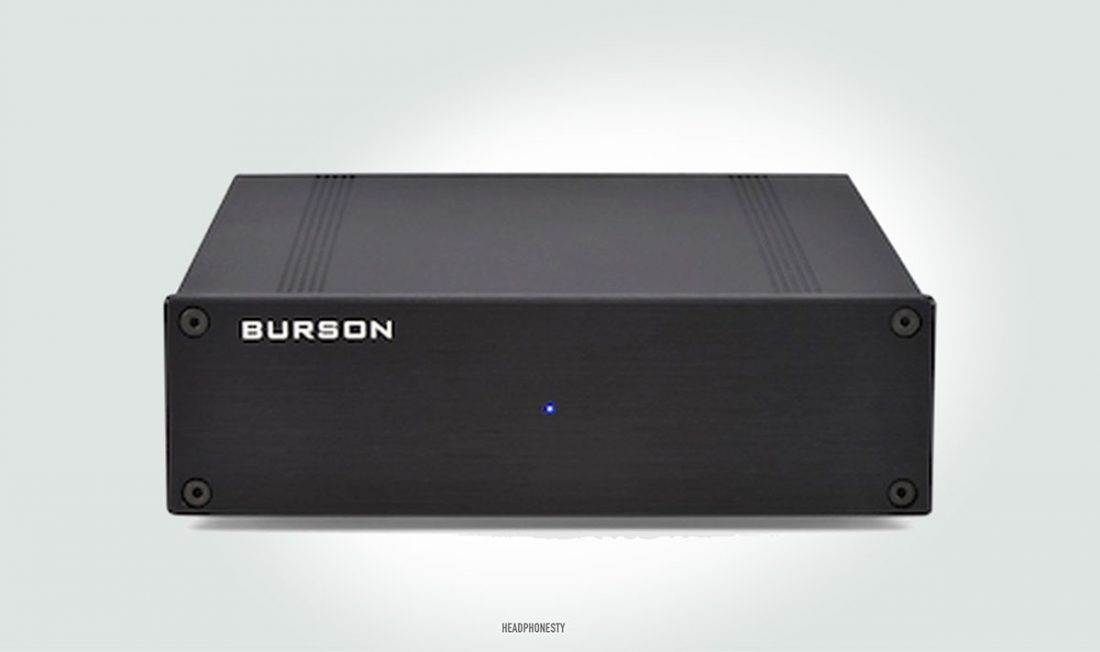 “What the Burson Bang does for me is transform a mid-fi casual listening system into something far more analytical and enjoyable.” 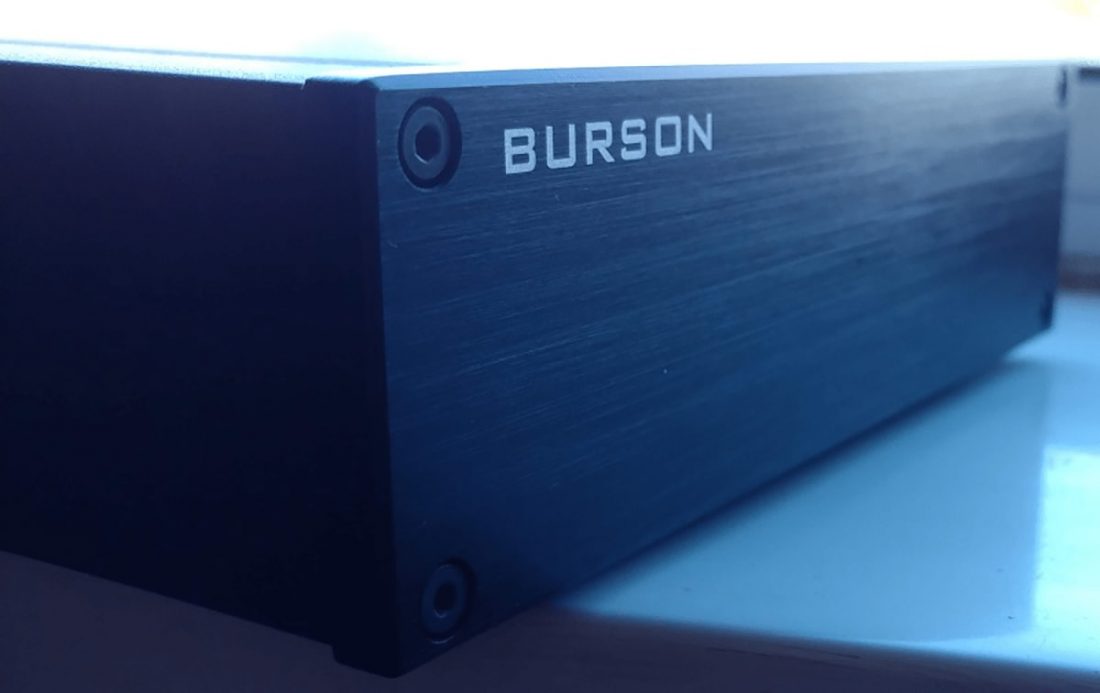 My intention is to replace the Sony with the Burson amp and connect the Chromecast Audio directly to the amp – using either my phone or voice control via my Google Home Mini to control the volume. I thought you folks might be interested in hearing about what I’ve discovered and some thoughts.

There’s plenty of reviews which go into a hell of a lot of technical details on the amp – I’m afraid I don’t have the same level of technical knowledge but I do know what sounds good – and the Burson Bang certainly offers one hell of a bang.

Loud! LOUD. Super duper bloody loud. I used to have the Sony set to around 60 – 70% when I wanted to listen to music loud. And believe me, Sony’s version of loud is not the same as Burson’s. To be honest, with the current setup of Google Chromecast Audio, Burson Cable + interconnect, Burson Bang and Mission bookshelf loudspeakers, I dare not set the volume above 10%. 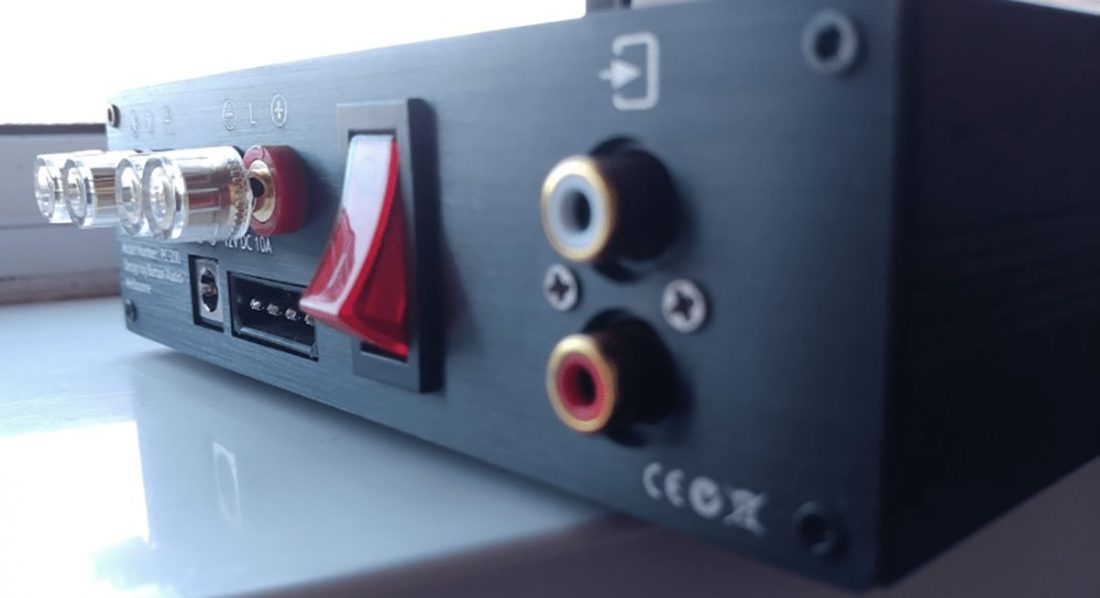 After listening to a few of my favorite tracks in ‘headbanging mode’ and then re-adjusting the volume to 7% one thing became apparent straight away – the system sounds really nice when playing at lower volume – much fuller and more detailed than the Sony system.

One problem I appear to be having though is that the Chromecast Audio is putting out too much signal for the amp. I changed the High Dynamic Range setting and found that the output was reduced somewhat – basically, something like 16% volume is like what 10% volume was linked prior to making the change.

Whilst that gave me more usable volume range, I personally found the High Dynamic Range setting simply sounded more detailed. I really wanted to be able to use the Chromecast Audio directly into the amp – firstly to keep the audio chain as clean as possible and secondly to save money. I shall continue to experiment.

What this amp does offer you though is superb sound quality and stability to the sound which is simply missing when using lesser components. The soundstage stability is truly remarkable. You can focus your mind on one specific element of the recording and easily discern it from the rest of the mix.

It’s not just the rock solid imagery that this amp conveys – the timbre of the instruments and voices are also quite wonderfully rendered. I must be honest here – I’ve always considered amplification to be a somewhat simple task – take the signal and make it louder without adding or taking away anything from the source. Whilst this is an absolute truth still as far as I’m concerned, the Burson Bang is producing texture and detail to my music in a very positive and enjoyable way.

Each time I listen to the system now I find something new in familiar recordings. The overall frequency of the amp appears to be pretty neutral in my opinion – any coloration in the sound is simply a result of the improved and wonderfully controlled dynamics.

What I realized today when listening to the system is that there’s a bigger sense of scale – listening to some comparatively simple music such as Patricia Barber – it truly was like she was stood up singing in my room – right in front of me! Very cool.

Bass is deep but controlled. My loudspeakers are of reasonable quality and this amp certainly makes them shine. Mids are rock solid and offer a really nice soundstage. Treble is sweet and nicely controlled. Music through this system never becomes ‘shouty’ or fatiguing.

I think the keywords for the sound quality from this amp has to be “rock solid”. This amp makes me want to consider repositioning my speakers in order to improve the sound even more – unfortunately I’m very constrained with where else I can put them. Ah well! 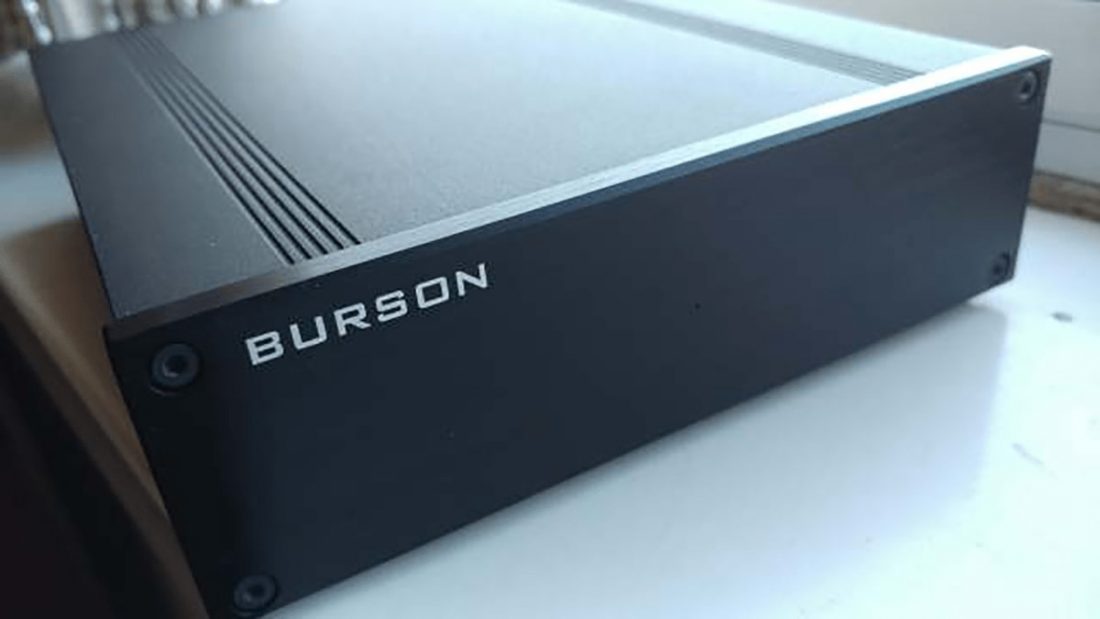 One final note regarding the Burson Bang – there’s the slightest noise comes through my speakers when I switch on the unit. The noise floor is non-existent without music being played and the only clue that the amp is on is the extremely bright blue LED on the front of the unit. Something that’s going to be mostly covered with Bluetac or black tape in very short order.

Even when I was using the Sony system (which featured remote control volume control) I used the Google Home Mini to control much of my listening using voice commands. This works really well and I often start a listening session without actually having to touch anything.

Whilst this is very cool and Star Trek-like, I often find that I have great difficulty in deciding what I want to listen to and can’t verbalize it effectively. I end up reaching for my phone or tablet in order to select some music to listen to. This, I suspect, is very much a personal thing and perhaps will fade once I become more used to living in the future.

There’s something about being able to use your voice for controlling pretty much all aspects of music listening. Tweak the volume in 1% steps, quickly skip tracks, mute/pause the music and even change source (kinda) by jumping from Google Play Music to internet radio for example. It’s not perfect but it’s getting very close.

In my opinion, Hi-Fi is very much regressing. The quality of the source material is generally getting lower and lower (although in all fairness you can now access very high-resolution music if you’re prepared to pay for it). Although I’m more than happy with the sound quality generated by the Chomecast Audio, I am fully aware that there are alternatives out there which sound a lot better – but at greater cost – both in terms of storage space and finances.

I personally recognize that, partially because of the limitations of my hi-fi system and partially because of my age, I’m no longer ‘chasing the dragon’ of extracting the maximum signal from my sources – I’m more interested in tone, dynamics, and impact – something that the Burson Bang delivers in bucketloads.

The Chromecast Audio is an excellent streaming device in my opinion. Its integration with the Google Home is brilliant, the sound quality is more than acceptable in my opinion, there’s no noise floor that I can hear from the Chromecast itself and its overall concept is stunningly well executed in my opinion.

What the Burson Bang does for me is transform a mid-fi casual listening system into something far more analytical and enjoyable. The size of the amp is ideal for me and I’m toying with the idea of hiding the system away and just having the speakers visible – that should please the wife somewhat.

In conclusion, I rate the Burson Bang very highly indeed. It’s a very well made product that just gets the job done with no bells and whistles. It’s fair to say that the amp is aimed at purists who need to get the best sound quality out of their system without having to compromise on size. Well done Burson – an absolute winner!

As I was copying and pasting this review from my word processor I thought I would add a couple of thoughts that have come to me since I wrote the review a few days ago. The Burson Bang screams quality to me. The cables they thoughtfully include with the package are really nice – I kinda forgot to mention this.
Also, I forgot to mention the fact that you can change the op-amps in the device which can potentially improve the sound even more. Interestingly Burson actually supplies a tool to get the screws out in order to do this upgrade yourself. To paraphrase Paul Hogan (note Australian note here) “That’s not an amp – THIS is an AMP!!!). Sorry Burson for the stereotyping – hope you didn’t spill your lager on the roo over that one
Filed Under:
amplifier
burson audio
burson audio bang