Despite the average sound and mic quality, Samsung Galaxy Buds shines when you look at the usability and technology that Samsung had thrown behind it. 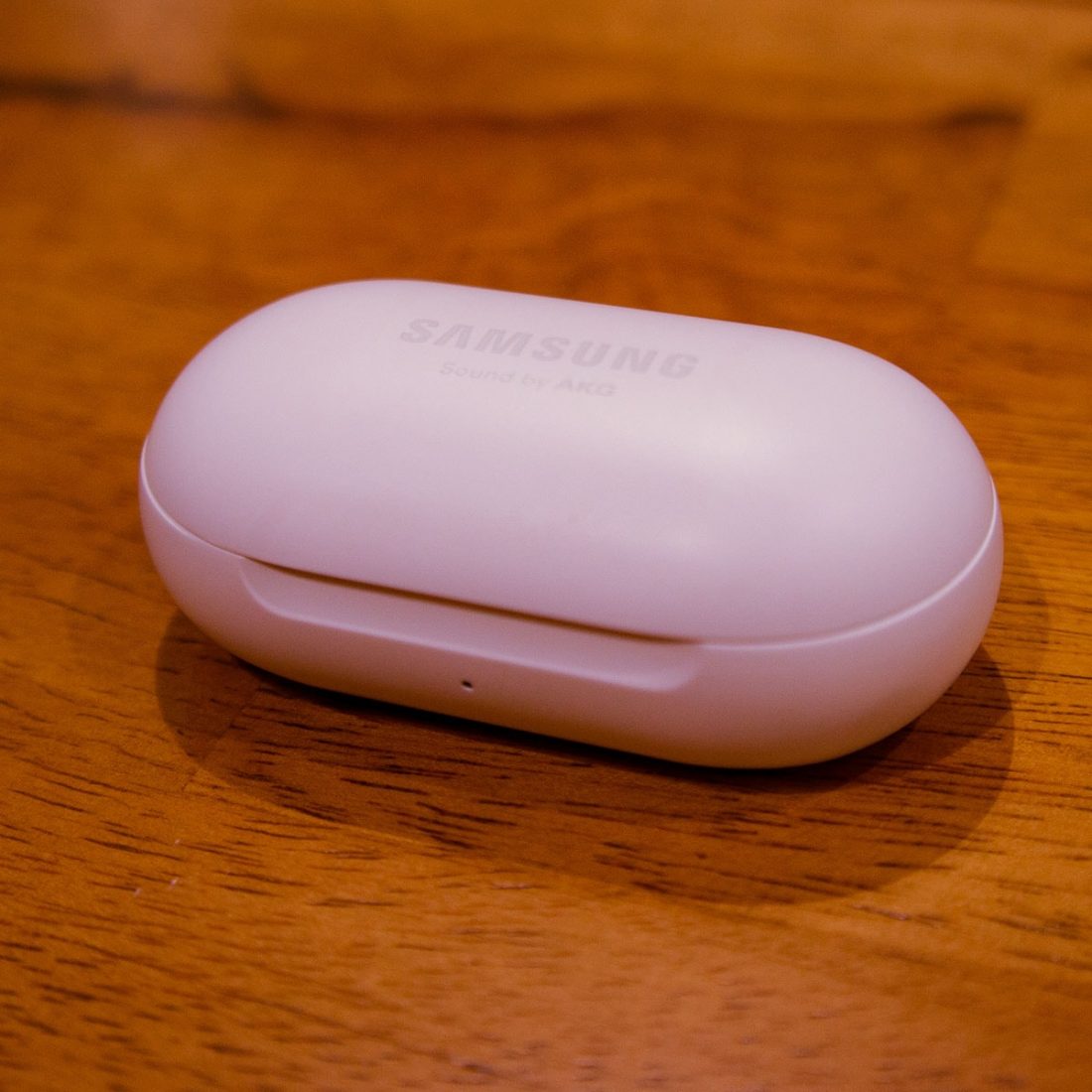 The charging case can give the earbuds one full charge and a little more which is roughly around 7hrs of playback time.

It has one USB-C port and supports wireless charging.

It really suits my lifestyle where I can share my USB-C charger between my laptop, phone, and the earbuds.

When I reach home, I can just place my Galaxy buds on the Qi charging pad without fussing over cables. 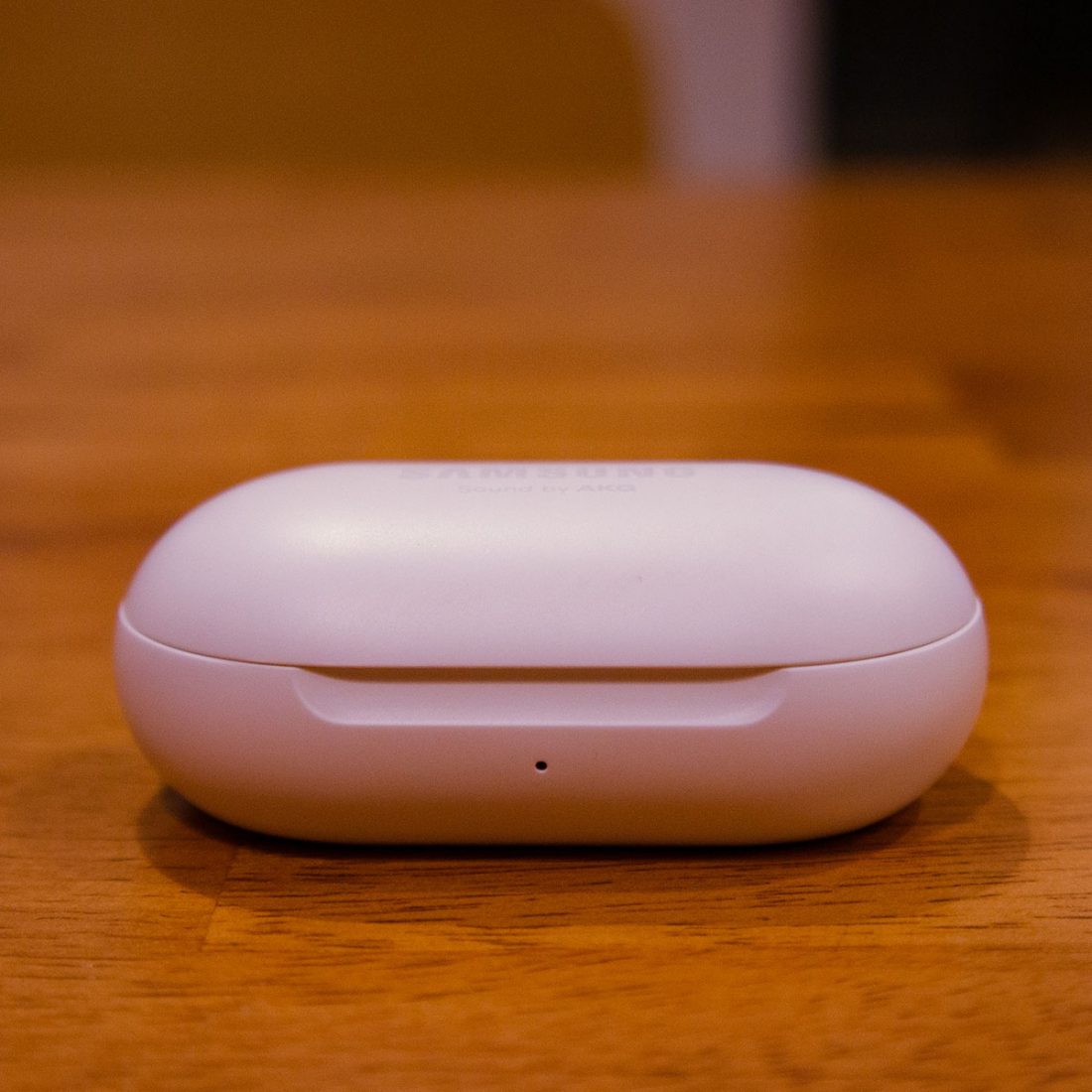 The box has a low profile so it is easy to grab in your palm. There is a groove underneath the cover that is deep enough for you to open the case easily with one hand. The mild magnetic grip holds the earbuds in place but it slips out with just 1 light shake. With just one hand, you can very easily take out the earbuds from the case.

Overall, the ease of use is brought down by the light indicators. It was confusing and the operation of the charging indicators. I had to read a manual to understand how the indicator reflects the state of the battery. 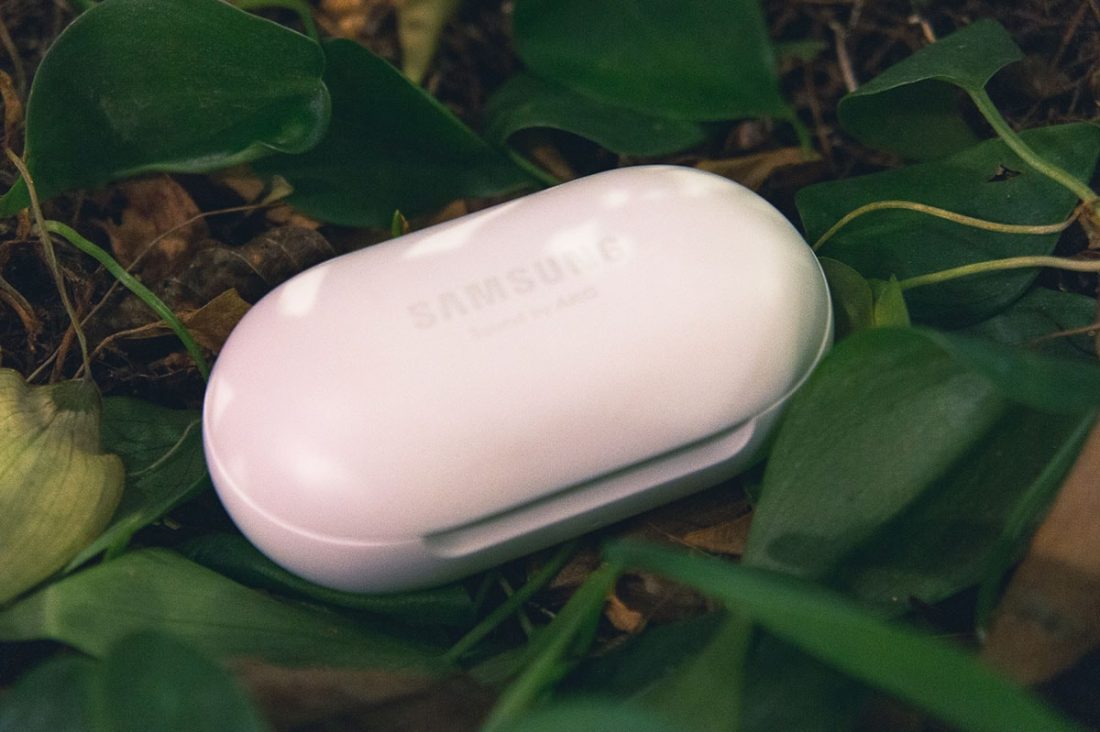 I like the smooth matte finishing of the case. It feels nice to touch without leaving any fingerprints stain. It feels way better than most chinese-branded true wireless earbuds in the market. The case doesn’t creak when you open and close it. The case cover clicks into position when opened fully, allowing you to access the earbuds easily.

Shaped like a pill, the white exterior with light gray text imprints exudes a zen-like quality.

Weighing at 50g (with the earbuds inside), the Galaxy Buds is considered a lightweight everyday carry. The total volume taken up is roughly around 69 cm3. (~4.26 Cu. Inches) It can slip easily into pocket without any obvious bulge. Overall, the Galaxy buds is a very portable device. 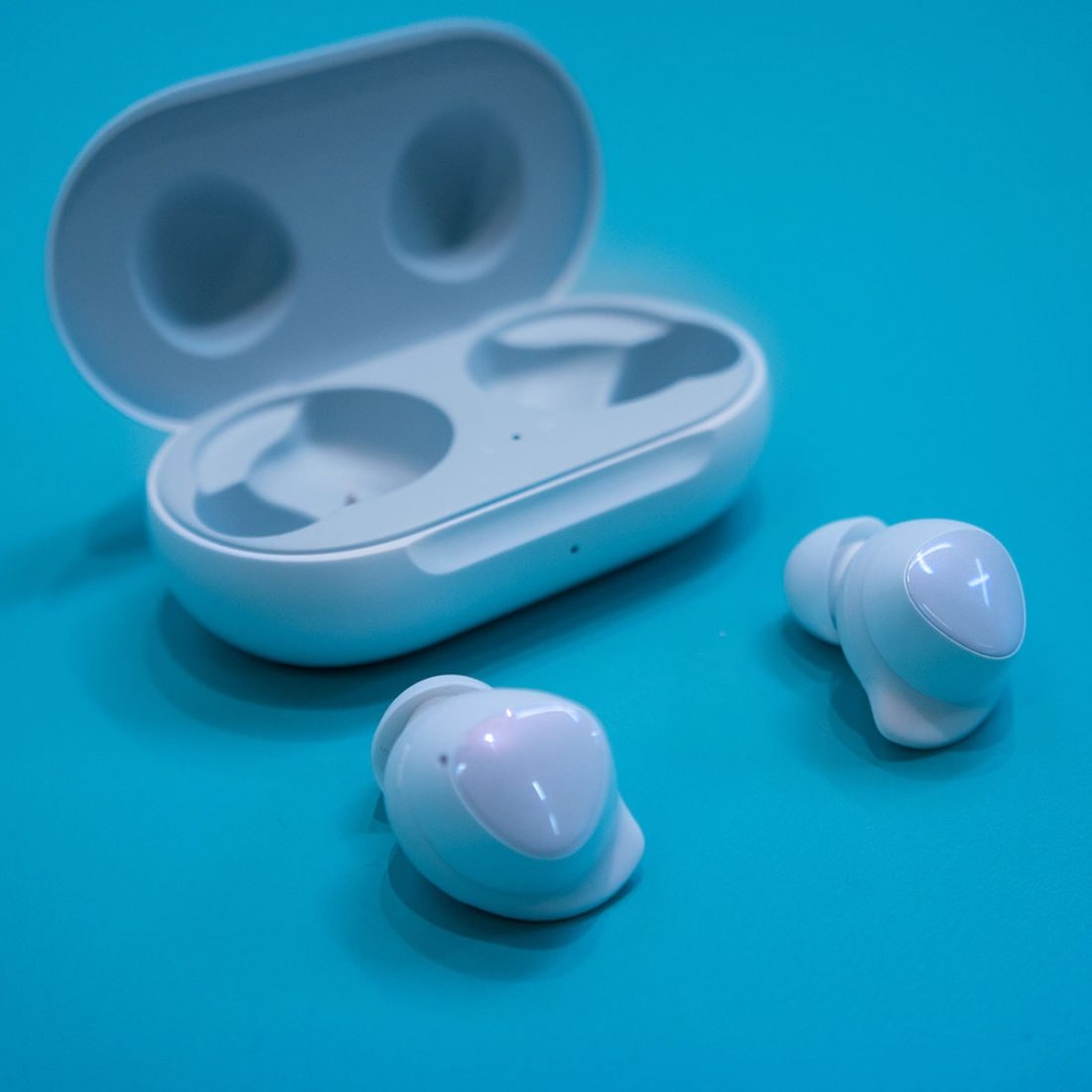 All in all, together with the charging case, you get around 13 hours of playback time.

There are touch controls on the earbuds. You can control playback, volume and even activate voice assistant (all configurable on the software application).

There is a smart feature where the music auto pause once they detected that both earbuds are out of your head. It doesn’t autoplay when both are back on though.

There is one small quirk that irks me. It is easy to have accidental touches with the controls when you hold the earbuds between the fingers, which messes with the song playback.

The earbuds play a lovely chime sound when you place the earbuds back into the ear. This gave users a hint that the earbuds are connected to your audio source and ready to be used. 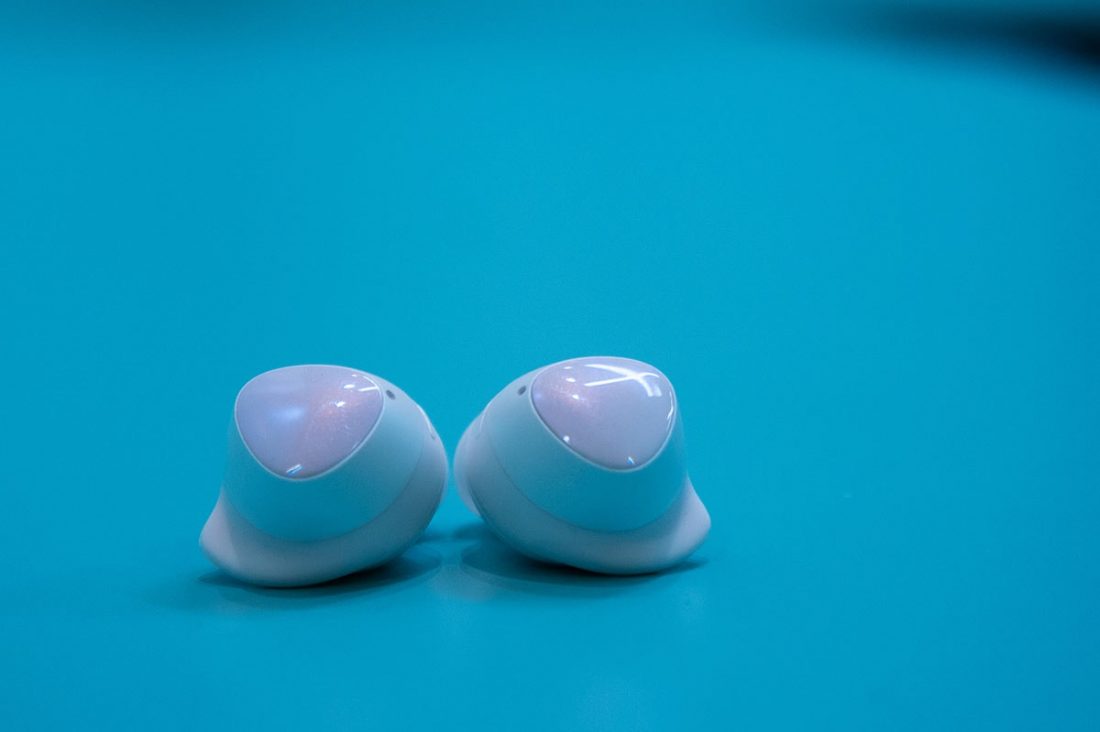 I like the comfort and fit of the Galaxy Buds. The nozzle is fairly short and it inserts easily into my ear canal. Like I mentioned previously, I brought it out for runs and most of them it stays in place. However, I did have to make some slight adjustment to push it back into position midway through some of my runs (especially when sweat gets in between the silicone ear tips.

The earbuds also come with a wing tip that allows it to stay snug within the ear.

Following the design of the charging case, the earbuds have an all-white exterior. The body has a tinge of iridescence reflection if you catch the light at the right angle. The rounded triangle faceplate of the driver is also has a glossy, pearl-colored surface.

The look definitely stands out from the sea of generic looking true wireless earbuds and AirPods imitators.

The mic quality is average at best. It picks up quite a lot of background noise in a noisy environment but it doesn’t overwhelm the conversation. Call quality is fairly decent. Voice clarity is grainy but you still can get your message across. Compared to the Jabra Elite Active 65t, the latter has a superior mic quality.

The above mic test is recorded in both a quiet and noisy (subway sound from spotify) environment. 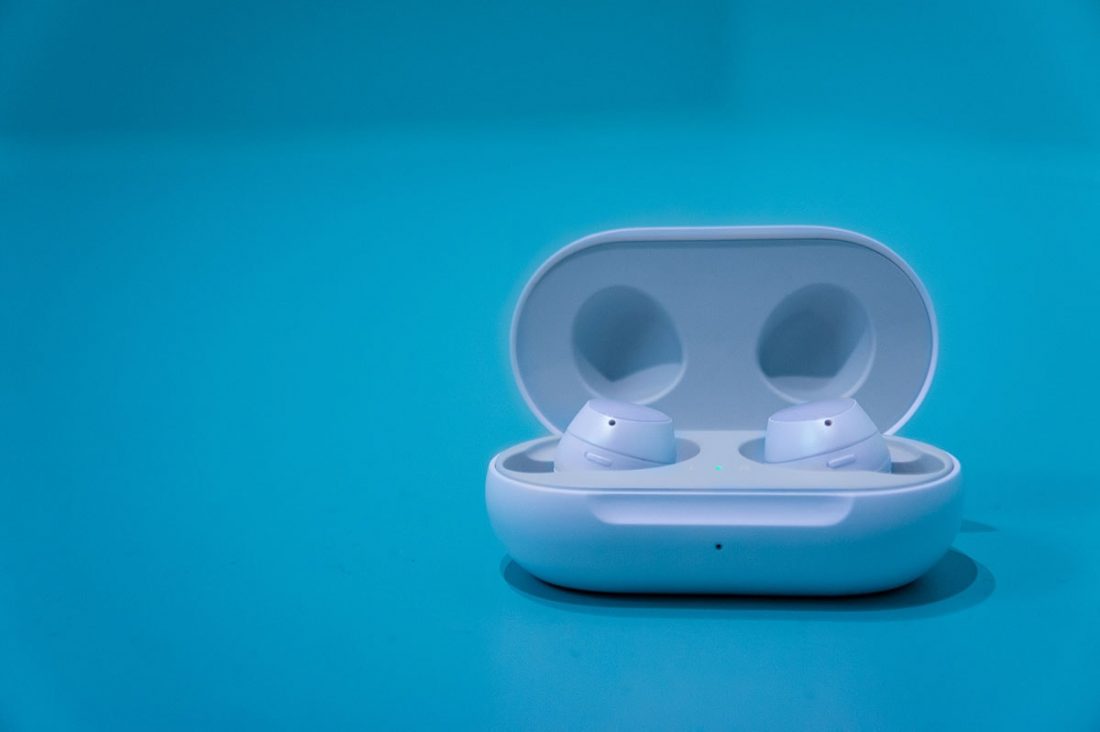 Ever since Samsung bought over Harman Kardon, they have taken the opportunity to label that their sound is tuned by AKG or even put AKG in their branding. However, I don’t find the sound quality to be impressive.

The Galaxy Buds has a V-shaped sound signature. The bass is emphasized and sounds slightly boomy. The vocals sound great to me and there are no issues with clarity. The lower treble works fine for me but not the upper treble.

The electronic violin distortion on “Rude” by Daniel Jang sounds pretty bad to me compared to what I usually hear from other IEM. There was less detail and it sounded tinny.

The sound separation is congested on more complicated tracks like “Limitless” by Adventure Club.

I also find the Galaxy Buds to be softer than other true wireless earbuds.

Overall, the sound quality works well enough if it is a pair of workout headphones but if you want a pair for music appreciation, the Galaxy Buds still has a long way to go.

The Galaxy Buds does its job well quietly. The noise leakage was minimal and is only slightly audible when you turn your volume to the max (who does that?).

The noise isolation is pretty good. Most low droning background sounds are blocked or muffled to an inaudible level. However, you can still partially hear sounds like conversations from within 5m or 16 foot around you.

AirPods-killer it is not, but for Android user, you will find it hard to find another alternative in terms of seamless connectivity.

If you have an Android phone (make sure Galaxy Wearable app is installed), pairing with the Galaxy Buds is a breeze. Just open up the case near your phone, the phone will auto-detect the earbuds. Just click “connect” and you are done. 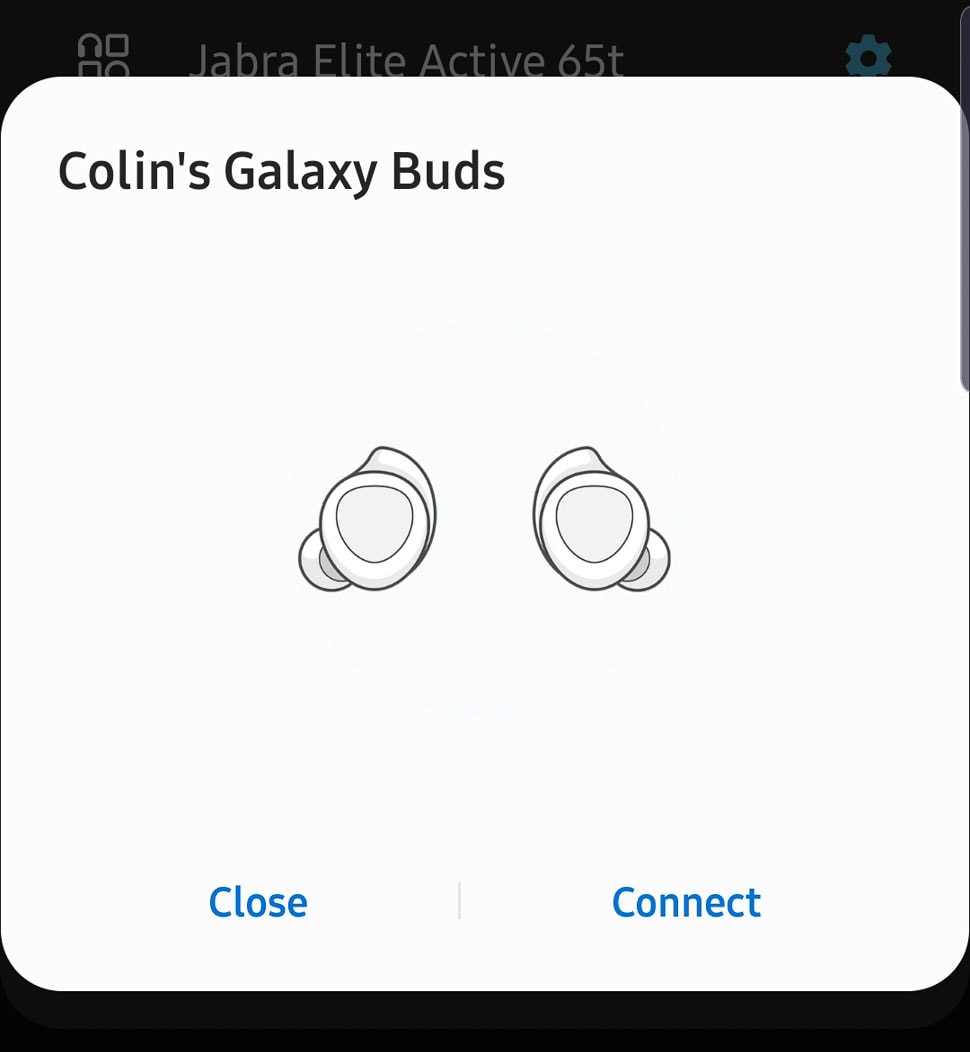 But if you are a iPhone user, you will pair it using the normal route. Open the case with the earbuds inside, it will enter pairing mode. You will need to manually choose from the list of available Bluetooth devices on your phone.

When the Galaxy Buds was just released, users had complained about connection stability issue. However, Samsung had updated their firmware multiple times and it seems to quell the complaints. I personally had no drop-out issues with the connection.

With an outdoor distance test, the Samsung Galaxy Buds managed to clock an impressive 196ft before the audio connection starts dropping.

The outdoor distance test is a line-of-sight test.

The Galaxy Buds has an ingress protection rating of IPX2. It can withstand light water contact like sweat but it is best not to bring it out for any heavy workout.

I brought it out for runs but that was before I found out about its low IP standard. Thankfully, it is still working fine. 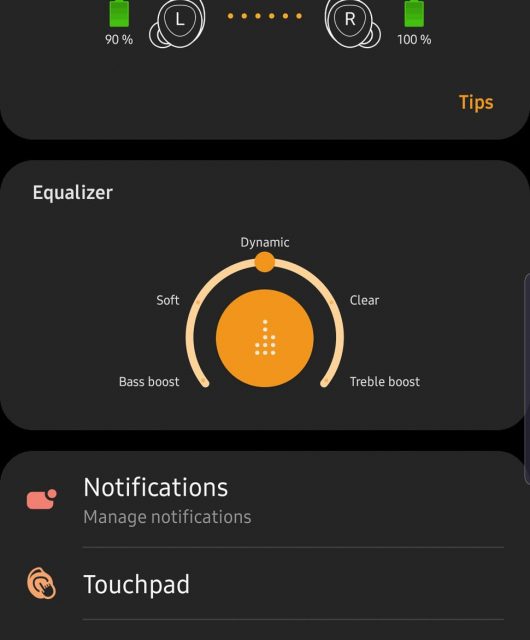 If you are using an Android phone, there is a Galaxy Wearable app that can allow you to configure your earbuds. There are EQ presets that change the sound quality. I pick “Dynamic” as my default EQ settings as it gave me the most natural sound signature. 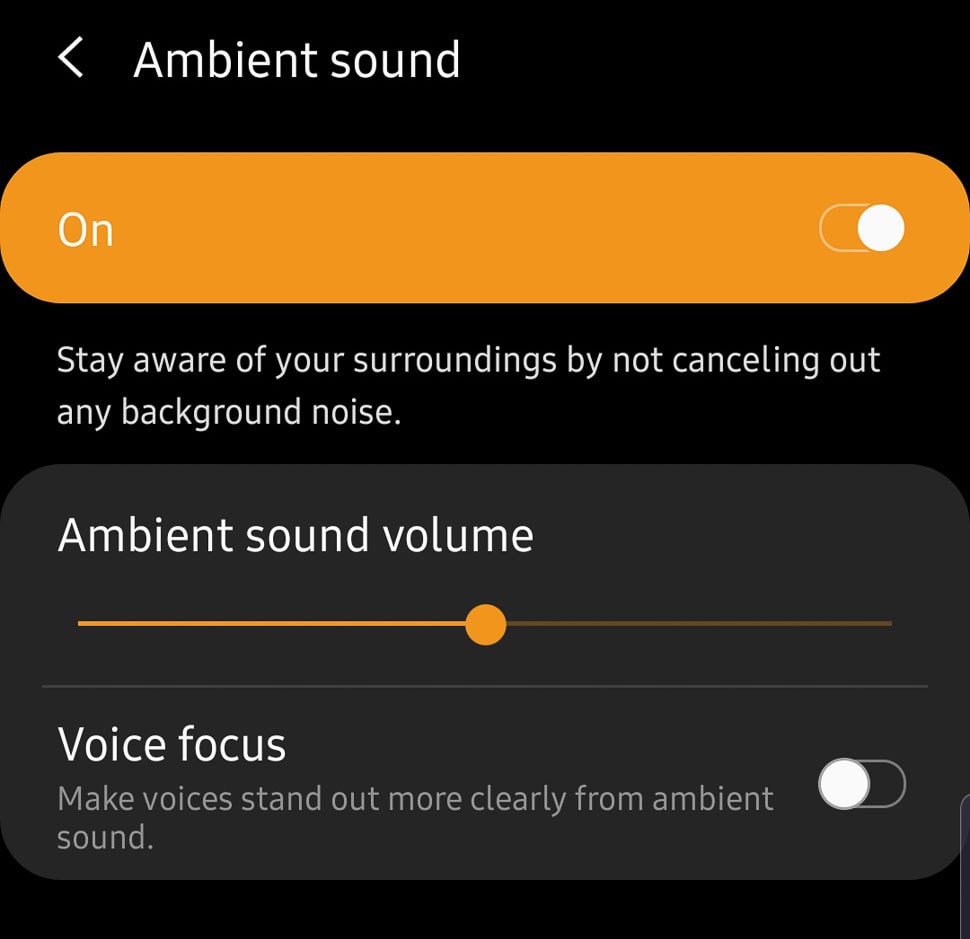 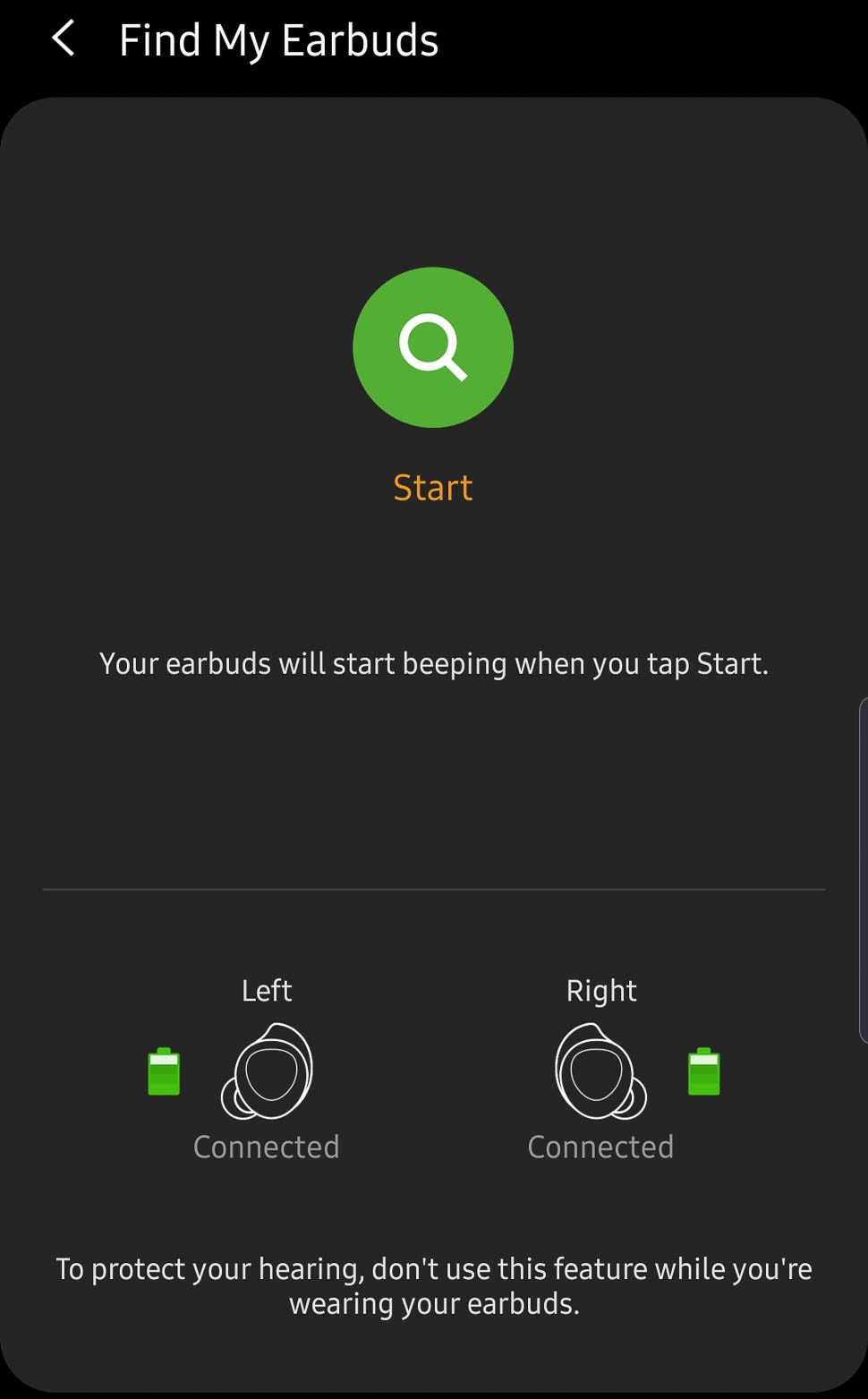 True wireless earbuds are relatively easy to misplace especially if you don’t immediately place it back to the case after usage. The app allows you to find the earbuds by playing a beeping sound. However, if your earbuds are already in the case and you misplace the case, you have no other way to find it.

The app allows you to remap your touch control to some actions such as activating voice assistant. However, you can only remap the “long tap” action.