Outside of constant practice and natural talent, professional Fortnite players also use the best gaming gears available, including a proper gaming headset. 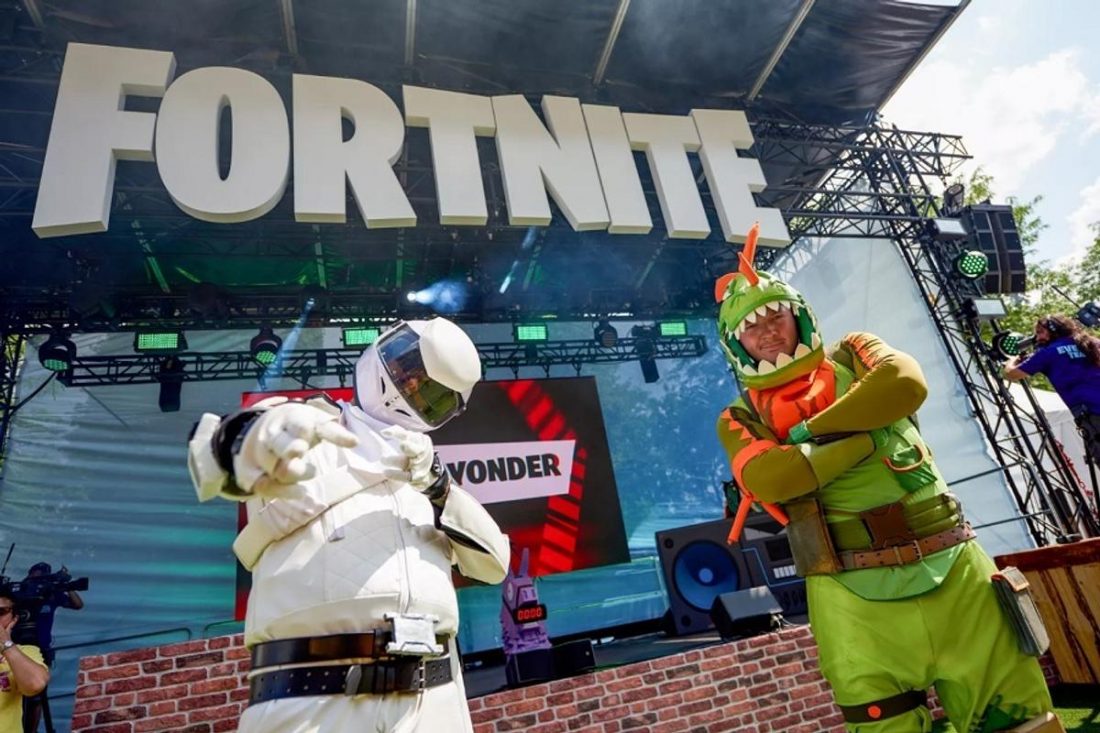 In just a little over two years, Fortnite: Battle Royale has given away nearly $85 million in prize money across 507 tournaments.

This is thanks to Epic Games’ decision to go all-in on developing the game’s competitive scene. This includes putting up $30 million in prize pool for the Fortnite World Cup alone.

While we’re not quite sure what Epic Games’ long-term plan for Fortnite: Battle Royale is, what we can be sure of is that, because of the game’s popularity among streamers and audiences alike, as well as bustling competitive scene, more and more players, both young and old, are starting to take Fortnite: Battle Royale seriously.

As competition grows tighter, players will inevitably look for ways to gain an advantage over each other. This has made it increasingly more important to take note of what the game’s top players are doing.

Below, we round up which gaming headsets the top professional Fortnite: Battle Royale players use to stay on top of their game.

What headset does Bugha use?

A relatively unknown professional Fortnite player, Bugha, who is currently signed with the North American esports organization Sentinels, rose to fame after claiming the Solo Championship title at the Fortnite World Cup back in July.

In just a single tournament, Bugha literally went from zero to hero. But, make no mistake, luck didn’t take him there. His sheer talent at fragging was undeniable right from the get-go, as he set the tone with a first-place finish with 9 eliminations in his first match of the tournament, en route to amassing a whopping 59 points over six matches — 26 points more than the second-place competitor — to win it all.

After a well-deserved victory back in July, all eyes will now be on Bugha going forward, and although his technical skills and game sense are truly elite, probably doesn’t hurt to have a reliable gaming headset like the Logitech G Pro by his side.

A gaming headset marketed specifically for professional gamers, the Logitech G Pro isn’t just all hype; it actually delivers. The sleek black aesthetics means that you won’t be afraid to show it off to your viewers when streaming and you definitely won’t mind wearing it for hours thanks to its lightweight design.

Thanks to its 40mm drivers, the audio is clear and precise. But, perhaps more importantly, the electret microphone is scary good and accurate, especially when you consider how small its detachable mic is.

What headset does psalm use?

psalm previously played Heroes of the Storm professionally for Tempo Storm, where he was considered one of the best “flex” role players in the game, capable of filling in whatever his team needed

Given his previous history, psalm is no stranger to competing against elites, and he took no time proving himself in Fortnite. Although not the flashiest player and never one to aim for as many kills as possible, psalm’s uncanny ability to stay mobile at all times and survive has secured him high spots in multiple online tournaments and LANs, including, most recently, a runner-up finish at the Fortnite World Cup.

Given his penchant for seemingly knowing how to hide and move away from his enemies before they even see him, it certainly must help that psalm uses the studio-grade AKG K712 PRO headphones when gaming.

Designed for critical listening in the studio when listening, mixing, and mastering audio, the AKG 712 PRO is definitely not your typical professional gaming headset of choice. Then again, so is psalm.

What headset does aqua use?

Bugha was not the only teenager that rose to fame overnight at the Fortnite World Cup.

One-half of the relatively unknown and underdog duo from Cooler Esport that made history in New York City, the Austrian professional Fortnite player, aqua, played spectacularly, along with his partner, Nyhrox, to secure the top prize of the duo competition portion of the Fortnite World Cup.

Although aqua was not as lucky in the solo portion and was eliminated quite early, the $50K USD he received is just a mere bonus to the $3M USD that the European duo split between them earlier in the tournament.

The young and rising star is currently listed to be sporting the Logitech G433 as his go-to gaming headset of choice, especially when streaming.

While not the most expensive gaming headset, the Logitech G433 is fairly capable. Equipped with a boom mic and a 7.1 Surround System, this jack-of-all trades kind of gaming headset certainly seems like a good fit for someone like aqua, who’s been known to switch up his playstyle in Fortnite every now and then.

What headset does Nyhrox use?

The other half of the unlikely duo that won the duo competition of the Fortnite World Cup, the Norwegian professional Fortnite player’s career has remained relatively mum since his historic win.

Armed with the Logitech G Pro X — although Nyhrox has also been seen wearing other Logitech headsets, namely the Logitech G633 — it’s probably only a matter of time before the youngster finds himself on the right side of history once again.

An upgrade over the Logitech G Pro gaming headset, the Logitech G Pro X relies on its 50mm drivers to deliver well-balanced but accurate-sounding audio, which is crucial in a game like Fortnite, where listening in on what your opponents is key to securing a Victory Royale.

What headset does EpikWhale use?

Considered as one of the most mechanically skilled players in all of Fortnite, the 17-year-old professional Fortnite player for NRG Esports is both a capable duo partner, evidenced by his 12th-place finish at the Fortnite World Cup, and an even better solo player, where he placed 3rd in the final day during the solo leg of the event.

Young and eager to prove himself, EpikWhale is set to accomplish even greater things in Fortnite, and he’ll be able to do just that with the help of the Victrix Pro AF.

Manufactured by one of the lesser-known brands when it comes to gaming peripherals, the Victrix Pro AF goes all-in on the pro gaming trend, but unlike others that’s just pure hype, it actually delivers. It’s comfortable, durable, and filled with tournament-ready features, including but not limited to an excellent mic and a 3.5mm jack.

What headset does Rojo use?

Not much is known about the professional Fortnite player for Lazarus Esports from the Netherlands. In fact, outside of him qualifying performance for the Fortnite World Cup along with Wolfiez, and the duo’s second-place finish in the duo competition at the event itself in July, the two hasn’t really achieved much.

Given that the runner-up duo finished just four points behind the eventual champions though, don’t expect Rojo to stay unknown for too long.

The future is certainly bright for Rojo, and he’ll look to replicate his recent success in the months to come, equipped with a wide assortment of high-end gaming gear, including the Sennheiser HD 660 S, which he’s been spotted regularly on his live streams on Twitch.

A slightly unusual choice for gaming headphones, the Sennheiser HD 660 S’s open-back design and dynamic audio range, lends itself to making it easier for a professional such as Rojo to listen in on important audio cues that’s happening all over the map, all without feeling uncomfortable to wear even after hours of gaming.

What headset does Kreo use?

A teammate of Rojo with Lazarus Esports, the young Hong Kong native is his team’s main option when it comes to solo competitions in Fortnite.

A calculating and persistent player, Kreo values survival and Victory Royale points over eliminations and style points. This helped him a lot in his run at the Fortnite World Cup, where all he needed was just 8 eliminations en route to securing a fourth-place finish at the event and a $1.05M USD purse.

Considered as one of the more affordable options as far as gaming headsets go, the ever-practical Kreo doesn’t deviate in his headset of choice with the HyperX Cloud Alpha, which was gifted to him on his birthday last year.

What headset does Wolfiez use?

Also signed with Lazarus Esports, the 15-year-old from the United Kingdom has a bright future ahead of him after finishing second place in the duo competition at the Fortnite World Cup alongside Rojo.

Equipped with a 7.1 virtual surround sound that ensures excellent sound quality and a boom mic for crystal-clear mic clarity, perhaps Wolfiez knows better than to rely more than what the HyperX Cloud II already offers to succeed in Fortnite.

What headset does Ceice use?

100 Thieves’ ace Fortnite professional player, Ceice is one of the few players to qualify for both the solo and duo competition at the Fortnite World Cup.

Playing alongside Elevate, the duo would rack up a total of 18 eliminations at the event en route to securing a third-place finish. Unfortunately, by the time solos came around, Ceice had little to no juice left and could only muster a 60th-place finish, which isn’t really half-bad considering his performance earlier in the tournament.

Having already earned over $1 million from playing Fortnite in such a short period of time, things are looking up for Ceice, and there’s little doubt that he’ll get where he wants with his choice of gaming peripherals, courtesy of one of 100Thieves’ sponsors, the Razer Kraken TE.

As the name suggests, this tournament-grade gaming headset comes with everything a pro gamer would ever need. This includes, among others, custom-tuned 50mm drivers, a lightweight but durable aluminum frame and THX spatial sound, so Ceice knows exactly where enemy fire is coming from and how to find or avoid them.

What headset does Zayt use?

Arguably the better half of the quintessential Fortnite duo from NRG Esports, Zayt’s individual skill and chemistry with his longtime partner, Saf, is undeniable.

Having already won or placed high in plenty of both online and LAN tournaments in Fortnite, the duo from NRG Esports was expected to make it big at the Fortnite World Cup, and that they certainly did.

Although they did not end up winning the duo competition, the two ended up placing fourth at the prestigious event, with Zayt going on to further cement his legacy as one of the game’s top players with a 36th-place finish as a solo player.

Zayt’s talent is matched only by his taste in headsets, where he uses the Beyerdynamic DT 990 Pro.

Used typically for music production, the expensive but highly effective Beyerdynamic DT 990 Pro is an odd-choice for a gaming headset, but it seems to work well for Zayt, as well as Fortnite: Battle Royale poster boy Richard “Ninja” Tyler Blevins, especially when he’s streaming on Twitch.

Then again, that shouldn’t be that big of a surprise.

Even though you’ll need an amp to make the most out of this headset, it’s an investment well worth it. The level of detail and spatial effect that you can get on the Beyerdynamic DT 990 Pro emulates surround sound so well — and that’s without requiring any kind of software too — that you’d have a hard time going back to a gaming-tagged headphone after you’ve tried them out.

We probably might never know just how much of an impact the gaming headset of choice of a professional Fortnite player can have on their gameplay. But, then again, does it really matter?

If there’s one thing that we can take away from all of this, is that professional Fortnite players value three things in gaming headsets the most, namely:

If you’re ever in the market for an excellent pair of gaming headsets, be sure to check out what the professionals are using. Who knows? You might be the next up-and-coming professional Fortnite player to bag hundreds of thousands if not millions in prize money at next year’s Fortnite World Cup!