After two Kickstarter projects which raised more than USD$200k respectively, Hidizs decided to revisit the in-ear monitor (IEM) market in 2019, with their new lineup, the Mermaid series.

Thank you, Nappoler Hu from HiFiGo for sending me the MS1 IEMs. It was provided to me free of charge in exchange for my honest review and opinion.

In late 2008 and early 2009, Apple iPod’s sales hit the highest mark. This triggered a lot of manufacturers around the globe to enter the portable HiFi market. Hidizs is one of them. In order to stand out from a bunch of competitors, a group of experienced technicians from Hidizs dedicated themselves to produce superior and affordable portable HiFi audio devices.

After all the achievements in DAPs, Hidizs decided to revisit the IEM market. Why do I call it a “revisit”? The Mermaid series which we are discussing today is not the first series of IEMs launched by Hidizs. While exploring the DAP market, Hidizs was trying to enter the IEM market. They launched Seeds, their first IEMs back in 2018 but it was not as well-received as their DAPs.

After stabilizing the DAPs segment, Hidizs is now sparing their resources to revamp their IEM lineup, with experience gained from their first IEM launch. 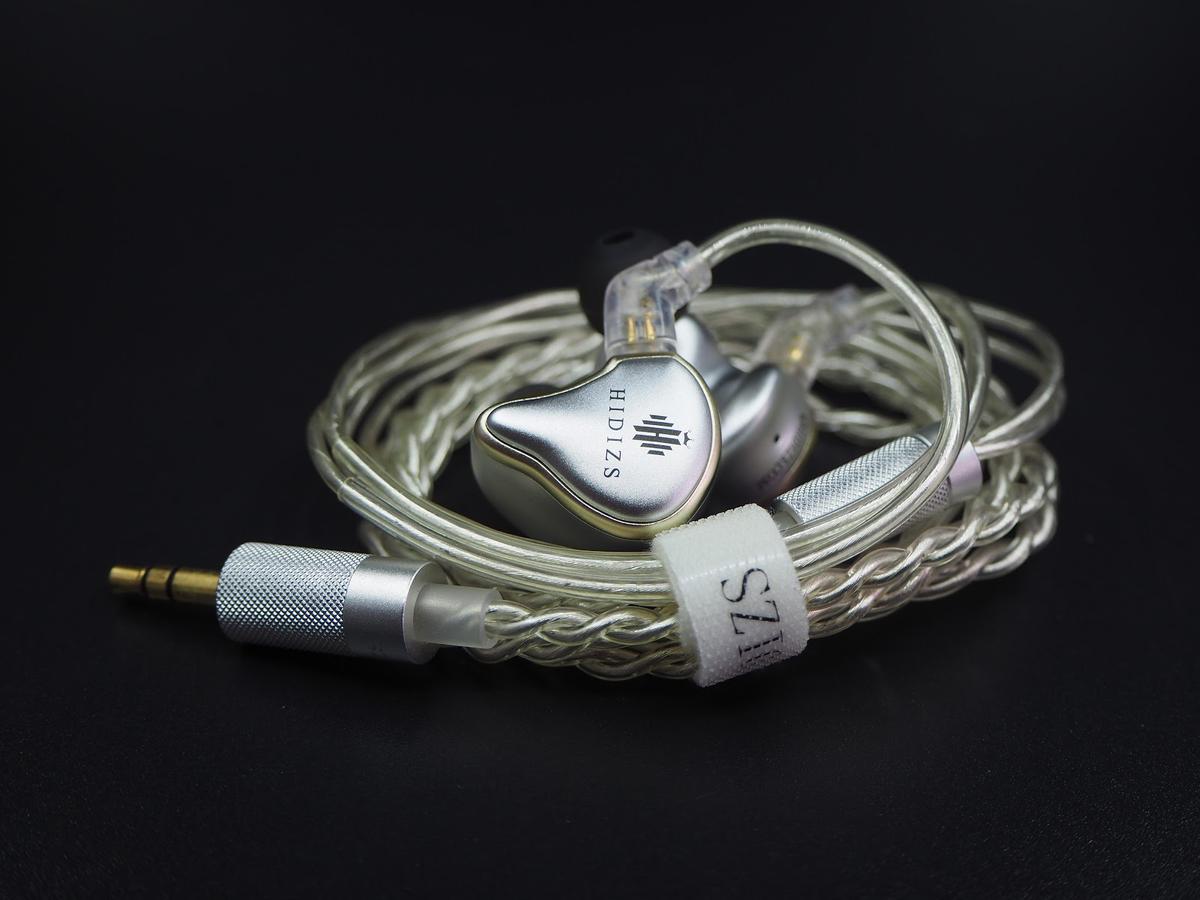 With MS1 as the entry-level IEMs, the detachable cable design, aluminum alloy shell and a bunch of useful accessories can definitely win a lot of entry-level audio enthusiasts’ hearts.

MS1 comes with a black hard box, with the logo printed in gold. There is a “Hi-Res” certification sticker on the box. The MS1 has been Hi-Res certified by the Japan Electronics and Information Technology Industries Association (JEITA) and Japan Audio Society (JAS).

The “Hi-Res Audio” stamp of approval is applied to headphones with frequency response performance of 40 kHz or above.

At the back of the box, the technical specification of MS1 is listed in bilingual – Mandarin and English.

Opening the box, Hidizs MS1 makes its first appearance to the user. The stock cable is pre-attached to the IEMs in the packaging. Lifting the top section from the box, users can find the accessories, underneath the IEMs and cable. Here’s the accessories that can be found in the box:

The shell of MS1 is built of aluminium alloy. The shape is crafted with a high precision computer numerical control (CNC) machine. The aluminium alloy shell makes MS1 look classy and modern. On the faceplate, the Hidizs logo is printed. MS1 comes with a dedicated ergonomic design, to improve the fitting and isolation. I will further elaborate this in the latter section.

On top of the shell, users can find the 0.78mm 2 pin connector. The 2-pin connector is slightly protruded from the shell, protected with a layer of plastic. This enhances the reliability of the connector while removing or attaching the cable.

The nozzle is built of metal too, similar to the shell. I believe it is made of aluminium alloy too. The nozzle length is average, similar to typical IEMs’ nozzle, making the tips-rolling job easier. There is a lip on the nozzle to provide a better catch to the ear tips.

The cable of MS1 is braided with 2 cores of silver-plated oxygen-free-copper (OFC) wires. The cable is soft and supple, yielding minimum microphonics when you are moving around with MS1 on. It is terminated with a 3.5mm unbalanced jack. For those who are using DAPs with balanced output, you can consider getting a balanced cable from Hidizs to replace the stock cable.

The storage case provided in the box is made of plastic. It can protect the IEMs to be free from compression and shock when the box is dropped. However, The box is too small and making the storing to be a difficult task. I always need to recoil the IEMs a few times to ensure it can be stored into the case. A bigger case will definitely be appreciated.

As mentioned in the previous section, the shell is built with ergonomic design. The shell has a semi-custom shape, to improve the fit and isolation. After trying with the 12 pairs of ear tips provided and some of my third-parties ear tips, I settled down with the Final Audio Type-E ear tips. They provide a better grip to my ear canals.

I think the grip is important because the aluminium shell of MS1 is heavier as compared to other IEMs with 3D printed acrylic shells. The IEMs will start to slip out from your ears if the grip is insufficient.

There is a small vent at the back of the IEMs, to mitigate the driver flex. Fortunately, this small vent does not allow much noise from the surrounding to enter users’ ear canals. The isolation is above average even with this vent.

Driver flex is when the driver bends due to the pressure of air against it. Usually, it occurs when you’re inserting the IEM into your ear and air in the shell creates pressure to bend the driver.

The analysis is done based on this pairing – Hidizs Mermaid MS1 hooked to my Opus #3 with ALO Audio RX portable amplifier. Rated at 18Ohms for impedance and 112dB for sensitivity, the MS1 can be easily driven, even with smartphones or tablets. I am using Final Audio Type-E ear tips in this analysis, because it provides better seal and isolation as compared to those stock ear tips.

MS1 has a slightly brighter sound profile with a U-shaped sound signature. The bass and treble are getting slightly more emphasis as compared to the mids. The presentation is lean and clean – you can expect much space and air in the presentation.

The soundstage is above average. No specific frequency spectrum is overly forward to congest the headroom. After trying with several genres like jazz, pop, and classical, MS1 can handle them without any difficulties. No unbearable or significant congestion experienced within the reviewing period.

Powered by a single dynamic driver, the sub-bass of MS1 is full-bodied and has a good presence. The depth of the headroom is well-created by the deep-extending sub-bass. It has good rumbles that could probably fulfill needs from bass-head audiophiles. Despites having a “slightly-boosted” sub-bass, the bass response remains clean and accurate. I do not experience muddiness caused by the emphasized sub-bass.

Moving to the mid-bass, the mid-bass has less emphasis as compared to the sub-bass. I believe this is to make space for the mids, so that the bleeding of bass to mids can be minimized. This is a good approach in tuning, especially you only have a single dynamic driver in your IEMs. The overall speed of the bass is average, similar to typical dynamic driver powered IEMs.

The mids is positioned slightly backward as compared to the lows, taking the center of the stage. The space spared for mids is huge, mid-frequency instruments and vocals sound breathy and airy. For vocals, because of the airy characteristics, they sound lean. I always prefer vocals with fuller bodies so they are more lively and emotional.

However, MS1 lean vocal performance makes it a good reference especially for vocals because there is minimum coloration in the presentation.

The lower mids have a lack of presence. Male vocals can sound far from certain tracks. The transition from the bass affected the lower mids performance. The upper mids are having more emphasis, due to the transition towards the treble. They are positioned slightly forward, pushing the female vocals nearer to the audiences. Instruments like guitars have great presence in the presentation, thanks to the accentuated upper mids.

The highs have a great presence, just like the lows. As mentioned earlier, MS1 has better emphasis on the lows and highs. The highs are bright and this could be a deal-breaker for those who have lower tolerance towards the bright treble. Cymbals are sounding crisp and well-extended on MS1. Guitars plucking are well-presented too, with significant presence.

On some of the tracks with more high-frequency instruments, the more emphasized or focus treble tends to deliver every treble note with higher decibels, making the headroom in the highs to be slightly narrower. This results in a stiffer treble where airs and space are insufficient for every note to extend freely. Perhaps a slightly less focused treble tuning might help in this.

Hidizs’s revamp in their IEM lineup with the Mermaid series is a good approach. With MS1 as the entry-level IEMs, the detachable cable design, aluminum alloy shell and a bunch of useful accessories can definitely win a lot of entry-level audio enthusiasts’ hearts. In addition, Hidizs’s smart approach in launching their products on Kickstarter’s project maximize their exposure in the audiophile market

Hidizs Mermaid MS1 is retailing at USD$69.99. You can purchase it from HiFiGo.

With the revamp lineup, Hidizs’ Mermaid series offers alternatives to audiophiles. Despite there are some flaws in the tuning, I would still consider this release as a success because the major direction is on the right path. Looking forward to more releases by Hidizs.