Presented as a representation of the Norse goddess of love in in-ear-monitor (IEM) form, Kinera’s Freya somewhat follows through on its theme surprisingly consistently, with surprisingly good results.

Mostly, I knew the brand name Kinera as just another IEM manufacturer, but you learn something new every day. Not only do they manufacture their own balanced-armature (BA) drivers, but they’ve also manufactured drivers for use in military hearing aids, among other things. While they started making IEMs in 2016, they’ve been involved in related research for quite a bit longer.

While international focus on Kinera hasn’t gotten quite to the level of a company like Moondrop, they’ve been around, and their lineup is somewhat well-known – especially their cheaper products, like the Tyr.

When I received the Freya, I wasn’t that excited, as my experiences with hybrids have been somewhat mixed over the years. More specific, I find that they often have somewhat disjointed, uneven timbres, and tend to have grain in unexpected places. 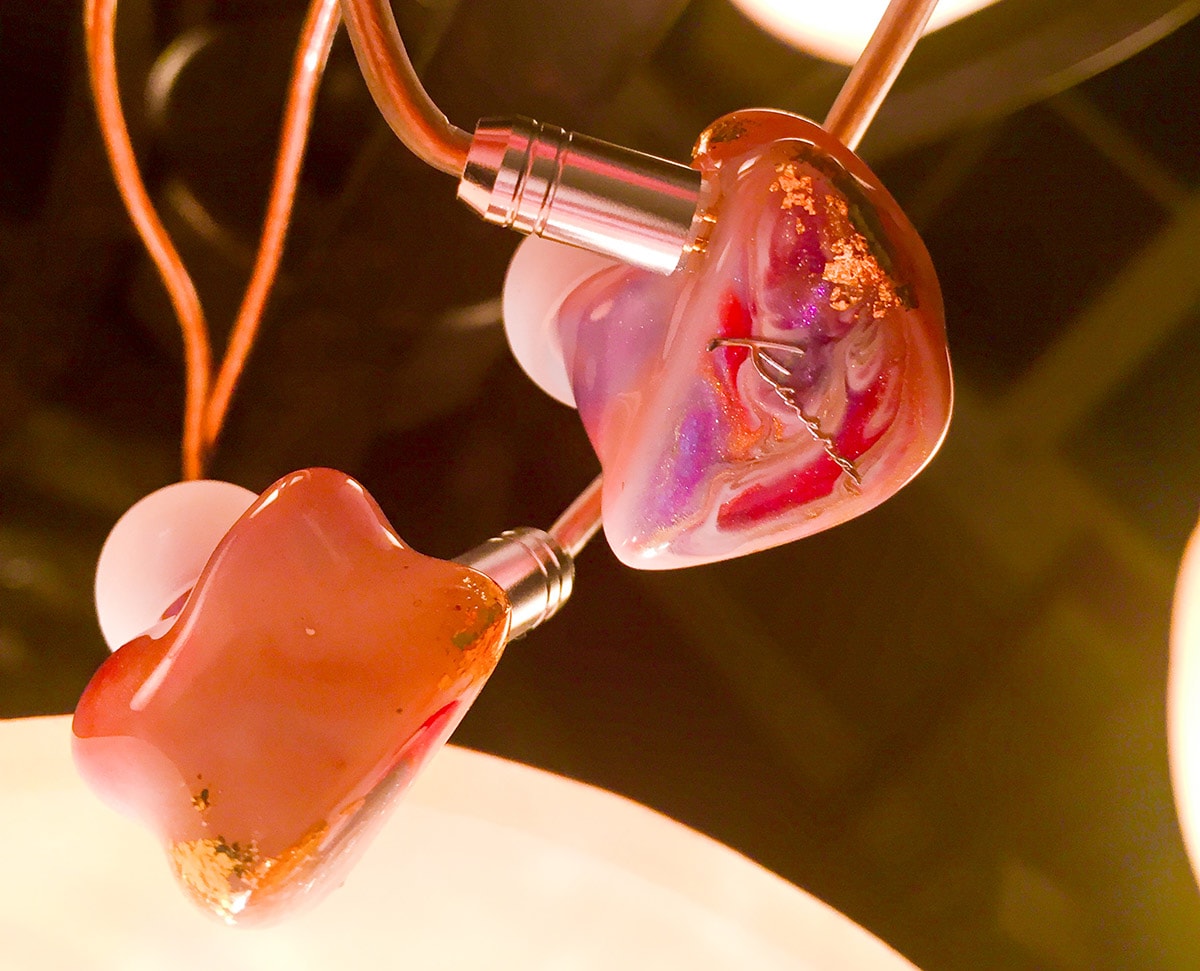 I feel that the Kinera Freya is a very nice, flavorful, recommendable IEM that people should know about. It does have some issues, and not everybody will be into the slightly peaky upper midrange and lower treble, nor will everybody be into the bass rolloff. I personally prefer something a bit more neutral, but if you’re into a mid-forward, vocal-centric, slightly warm and “sweet” sound signature, the Freya is worth consideration.

So I was surprised to find that the Freya was rather good, in my opinion. It’s not knock-your-socks-off good – it does have a few flaws, one of them “a bit glaring,” and it has a flavor that is certainly not neutral. Still, I’d imagine that people with a few dollars to burn could very well enjoy this.

Also, the Freya is, yes, a themed IEM! Here, it’s named after Freya, the Norse goddess of love and beauty. Kinera definitely follows through on its theme, both in sound and looks, so I think it’s worth mentioning.

Thanks to HIFIGO for providing this review unit free of charge, in exchange for an honest review.

The Freya uses a combination of house-manufactured drivers (a 7mm dynamic for bass and a BA tweeter) and Knowles BA drivers for midrange.

Well, let’s just get this out of the way first: the Kinera Freya is certainly a looker. It has a very neat-looking resin shell with some gold leaf nestled in there for added luxury. I suppose I have something of an ideological opposition to gold leaf, but I guess it’s put to better use here than in your dinner.

Those shells come in two colors, named “white” and “black” respectively. While I respect the simplicity in naming, I should add that neither of those names gives the full story. The white shell is actually an ethereal, gemstone-like mix of eggshell, lavender, and pink, while the black one has a vein of teal and white resin running through it. They’re both very pretty!

The shells also fit comfortably in my ears, which is a quality I’ve found somewhat difficult to come by in my recent IEM acquisitions. There’s not much to say about them, and that’s a good thing – no ear fatigue, no weird sharp bits, no falling all over the place. They’re not too big, and they’re not too small – they should fit the average ear quite well.

And, I mean, I did go running with these things, so if they were prone to falling out or getting uncomfortable, I would know.

Shall we talk packaging? Well, there’s not much to discuss there either – it comes in one of Kinera’s trademark hexagonal boxes, along with a mostly standard assortment of accessories (a case, some eartips, etc.). Shoutout to Kinera for including two dongles, though, for use with your iPhones and Androids and such.

I still cling desperately to my iPhone 6 with its built-in aux port, so I never found myself making use of it, and I did the bulk of my review listening off a Schiit Modi 3 and JDS Labs Atom. Still, it’s a nice touch (they actually included 2 dongles, but one may have been a reviewer perk).

The cable is one of those ostentatious copper ones with the clear plastic sleeves, and does have a somewhat bothersome tendency to hold its shape, and a rather odd rubbery feeling to it. But I’m not going to complain much – it’s fine, really!

Overall, I think the midrange works quite well for a lot of genres – one just has to be careful not to feed it music that’s overwhelmingly harsh or upper-midrange-centric, because the colorations of the Freya can push things just over the edge.

Frequency-response-wise, the Freya is actually not too far off from neutral – running a sine sweep, I hear relatively few obvious, large deficiencies. However, there are a few colorations: a tasteful midbass boost to add some warmth, and a few other irregularities mostly concerning the region from about 3kHz to 6kHz – the upper midrange and lower treble.

Overall, I find the Freya a relatively smooth-sounding IEM with proficient bass and non-fatiguing treble. Resolution is about average for a USD$249 hybrid IEM – it’s OK, but not worthy of note.

There’s also a bit of that infamous “BA timbre,” meaning sounds in the midrange and treble have a bit less “grip” and “solidity” to them than you might like. I personally happen to like BA timbre, so I don’t mind – to me, it sounds soft and refined, rather than weightless. But your mileage may vary.

And I’m also getting soundstage out of the way – it’s fine. Not bad, not great: that is certainly not what this IEM is trying to focus on, so

Some have pointed out that the bass is not exactly outstanding for this price point, and I’d tend to agree. There’s some audible rolloff: it starts at around 60 Hz and really falls off below ~40 Hz. Neither is the bass the tightest or most textured out there. Still, compare the Freya to any over-ear open-back headphone at its price, and there’s no competition.

What I will commend the Freya for is that the bass is extremely tasteful. I don’t say that in order to excuse its faults, I say it simply because that’s how I hear it. It’s very smooth, partially because it’s rather midbass-centric.

I’ve also got to commend the Freya for something that almost never gets any attention in the audiophile world: its presentation of male vocals! We all care about female vocals, I know, but listen to some Mark Hollis over the Freya and I find myself really taken with how intimate and smooth his voice is.

I think the smooth and tasteful midbass is partially responsible for that effect. Man, can I say tasteful one more time? I’m really into the Freya’s uniquely-tuned bass, although I can imagine that many will take issue with the roll-off.

The Freya is mostly a midrange-centric IEM, so the midrange had better be pretty well-tuned. The HIFIGO page keeps going on about how Freya is the Goddess of Love, and the packaging is emblazoned with the slogan “Love and beauty is at my command,” so one can reasonably expect some midrange “sweetness,” which usually translates to a little boost in the upper mids.

Well, that’s what we get: the midrange tone is mostly defined by a little boost from 3 to 4.5 kHz, which brings vocals forward and adds a bit of a bright edge to an otherwise quite warm-sounding IEM.

I will admit, I occasionally found the 3 to 4.5kHz boost a bit much, which is why I hesitate to recommend this as a general-purpose IEM. It tends to amplify the harshness inherent to a track, if there is any, and it can bring certain percussion forward a bit too much.

But, that is the way of things when it comes to flavor IEMs: if you’re going to stray from dead neutrality, you’re not going to win ‘em all. And the Freya is certainly not colored enough to ruin itself the way certain other audio products can be. I would say that the Freya manages to stick within the boundaries of “tasteful coloration.”

Overall, I think the midrange works quite well for a lot of genres – one just has to be careful not to feed it music that’s overwhelmingly harsh or upper-midrange-centric, because the colorations of the Freya can push things just over the edge.

After the 4.5kHz upper-midrange/lower-treble peak, the Freya is a bit recessed until 6kHz, which gives it a bit of a warm character. Above that, I’d say the treble is more or less perfect.

Again, though, that 4.5kHz can affect the character of various treble-centric instruments and sounds more than you’d think. The Freya has absolutely no problems with sibilance – but instead, I find that consonants like the soft “j” can come off as a bit over-emphasized and peaky.

Same goes for instruments like glockenspiel, and certain kinds of crash cymbals, which can have a kind of glarey quality.

This is a problem that’s become increasingly apparent to me in extended listening sessions, and I would call it the Freya’s Achilles heel – just that little bit of lower-treble etch. Again, whether or not you hear this as especially problematic depends on you, but to me, it is certainly occasionally bothersome.

The IEM as a whole is also not astoundingly resolving. It can

As I said, above that peak, everything is fine. The mid-to-upper treble is free of grain, and has a pleasing softness to its character that really evokes that recurring “love and beauty” theme. Clearly, Kinera knows how to design a BA tweeter! Hats off to them for their exceptional mid-to-upper treble.

So, what does this all mean? I feel that the Kinera Freya is a very nice, flavorful, recommendable IEM that people should know about.

It does have some issues, and not everybody will be into the slightly peaky upper midrange and lower treble, nor will everybody be into the bass rolloff. Whether you’ll be able to hear these weaknesses depends on your ear and the music you’re listening to, but in suboptimal circumstances things can sound a bit muddy or glarey.

It also doesn’t have class-leading resolution, but that’s OK – this IEM is more for flavor, anyway.

But, the Freya does deserve commendation for its looks, its comfort, and many aspects of its sound. I personally prefer something a bit more neutral, but if you’re into a mid-forward, vocal-centric, slightly warm, and “sweet” sound signature, the Freya is worth consideration.

If it sounds like Kinera’s Freya is right for you at USD$249, then go ahead and check it out on HIFIGO!
Filed Under:
2-pin
balanced armature
dynamic driver
iem
kinera