With the Volans, Astrotec experiments with a single, relatively large (10.5mm) Tesla dynamic driver. The results? A smooth, relaxed sound signature – but is it worth its USD$330 price tag?

It seems like every new IEM that I sit down to review has something new to offer, some kind of industry-first, or some unique combination of drivers. And I can understand why: in a crowded market, it’s usually necessary to do something to differentiate your product from the field.

The Astrotec Volans seems to provide an interesting take – although it’s hard to tell, from their marketing material, exactly what’s being done here. Their website mentions brass, copper, and a “customized biological diaphragm.”

They mention that brass has been used in musical instruments for ages, for its “good acoustic characteristics.” I assume this means that the housing of the driver is made of brass, with a copper voice coil and a large multi-layer biocellulose driver.

However, the description also mentions a “whole copper driver unit,” supposedly an industry first – so details are still a bit hazy.

I’m also not so clear on the significance of the “Tesla” technology they discuss – which is, as far as I can tell, specific to headphones released by Beyerdynamic. Perhaps this is simply how they refer to an ordinary moving-coil driver – but that’s somewhat odd if true.

In any case, what we have here is an IEM that contains a single, relatively large, dynamic driver.

Astrotec is a Chinese audio company that has been around for a while, but this is the first product of theirs that I’ve personally heard. Looking through their product catalog, this appears not to be the first single-DD product they’ve made, with the cheaper Lyra Nature, an earbud, containing an even larger 15mm dynamic driver.

This unit was provided free of charge by HiFiGo in exchange for an honest review. 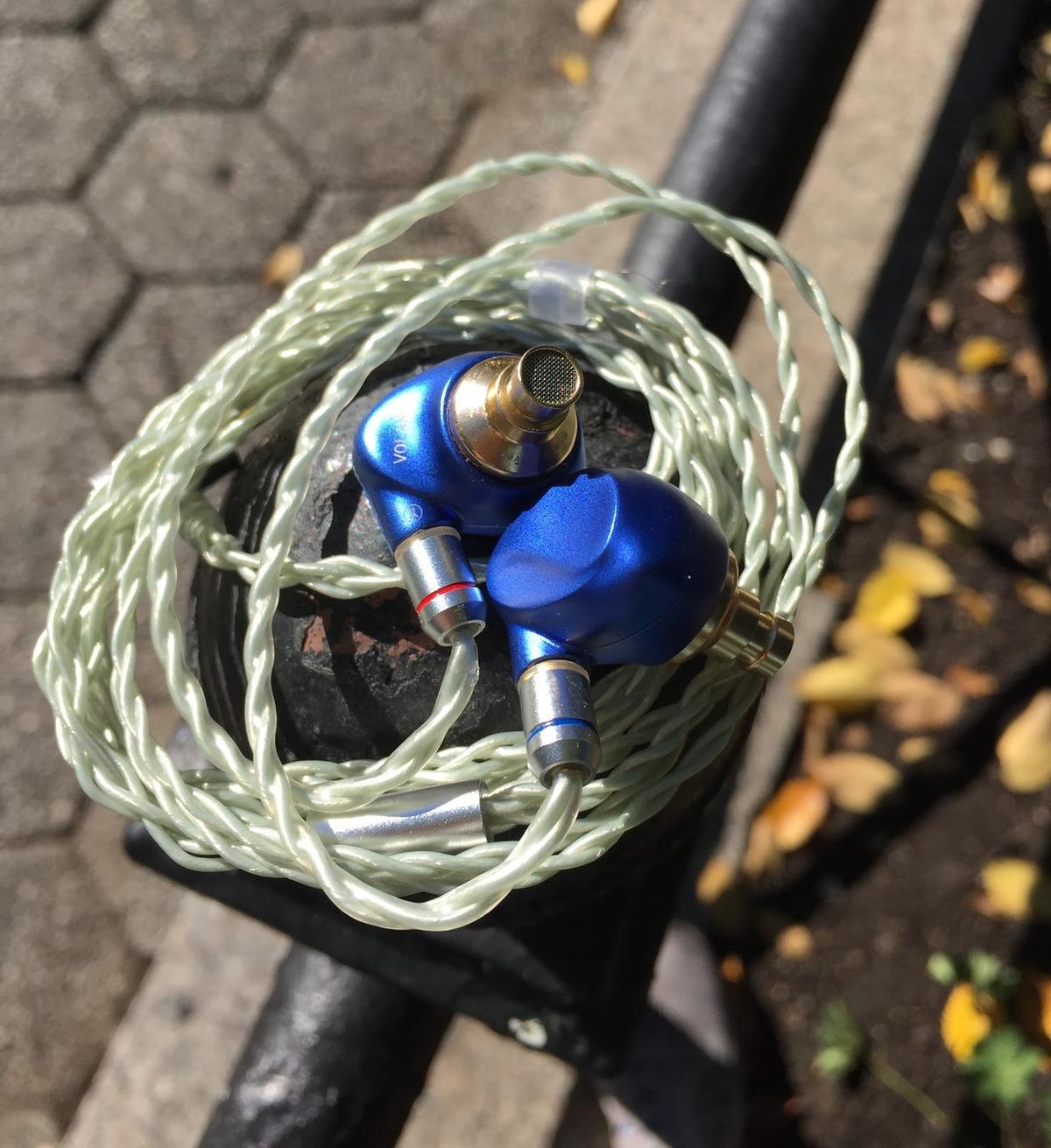 The Astrotec Volans is an attractive-looking pair of IEMs that, for me, unfortunately doesn’t provide the performance to back up its looks. Its bass, while not bad, is only average, with some looseness and lack of slam and texture in crucial moments. Its midrange sounds somewhat unrefined, with below-average resolution and an “off” timbre. Its treble is subdued and rolled-off, although not glaringly flawed.

The Volans boasts pretty typical stats for an IEM, and poses no real difficulties when it comes to amplification.

The Volans looks great, with a smooth blue metal body that does a pretty good job of conveying its space theme. I like its curves and its smallish size, and I like the brass-like rounded metal tube. Aesthetically, the Volans is a very cohesive and unique product.

Unfortunately, once I put them in my ears, I discovered why this is such a unique product: they don’t fit very well! At first, they didn’t fit at all. Even after I managed to get them to stay in by playing with various positions and eartips, I could hardly say they fit well.

Here was, as far as I could tell, the problem: the capsules were too small to find any purchase in my pinnae, and the nozzles were at an odd angle. The end result was that the IEMs were continuously slipping out, requiring constant readjustment.

This hasn’t been reported as a problem in other reviews, so it could be a problem specifically with me and my ears; and this is hardly the first product to offer a poor fit with my ears.

Often, the problem can be ameliorated to an extent by playing with eartips. Indeed, the problem was fixed to an extent by switching to medium eartips over small. However, for a USD$330 IEM, I was dismayed by the paucity of eartip options available to me – limited to small, medium, and large eartips, with a single pair of foams. Not horrible, but not far above much cheaper options.

It costs so little to include these, and I would like to see Astrotec offering a bit more in terms of accessories. The Pelican-style case, too, is nice to see, but offers nothing in the realm of portability – I can hardly be expected to shove such a large object in my pocket.

Overall, I consider the Volans attractive, but somewhat disappointing in terms of comfort, ergonomics, and accessorization. Astrotec could at least offer a couple extra sets of tips – that’s all I really ask for.

Overall, I’d call the tonal balance of this earphone warm, and that’s how most other reviewers have described it as well. I’m not sure if that’s the best way to describe it, though.

That’s not to say that it doesn’t have any of the qualities of a warm IEM – the treble is indeed pulled back, from about 5kHz on up, giving the IEM an overall “midrangey” quality. However, there is sufficient upper midrange to give the midrange a quasi-neutral sound – “balanced,” at the very least.

However, I think most of the warm, “relaxed” sound comes from a slightly slow, blunted, rounded-out transient edge that lends everything a sort of soft quality. That’s not to say this IEM isn’t capable of harshness too (we’ll get to that later), but it overall sounds quite relaxed and…well, slow.

Enough about the sound signature overall – let’s jump into a more detailed analysis.

The Volans provides good bass extension without over-emphasizing the bass. Tuning-wise, there’s no hugely obvious midbass hump or roll-off, meaning the bass sits at the right level in the mix. Obviously, this changes if the IEMs lose their seal, and they did, not infrequently, while I was listening (see my above comments on fit).

My main problem with the bass is its overall character and the way it handles transients. The bass absolutely has a soft quality to it, lacking in slam, definition and texture.

It gives the music a rich, enveloping quality, though, and it has the power to lend every instrument its full weight – it never sounds thin or lightweight. So I can see how some people would enjoy the Volans’s bass response for its overall pleasant quality.

However, I don’t think one has to sacrifice quite as much bass detail as the Volans does, in order to get that kind of richness. Overall, I’d say the Volans’s bass would sound more at home at a slightly lower price point.

As it does in the bass, the Volans possess a kind of soft transient response in the midrange.

Tuning-wise, I find that the Volans doesn’t quite manage its pinna gain (the necessary natural peak in FR around 3kHz) quite right. It starts a bit too late, and it’s a bit too sharp. This results in an overall warm quality to the sound, but with some upper midrange harshness that comes out with certain tracks more than others.

Of course, this by itself wouldn’t be a big deal – in fact, one of my favorite headphones, the Audio-Technica ATH-AD2000, has a somewhat similarly-shaped midrange tuning.

Unfortunately, this is combined with some glare, or what sounds like mild but audible harmonic distortion. This makes the midrange occasionally harsh to listen to, and it always sounds a bit “off,” “artificial,” or otherwise “wrong.”

The midrange is also characterized by a distinct lack of resolution – perhaps also due to the distortion. In any case, I lack the engineering knowledge to determine a culprit, but I suspect Astrotec may have had some issues dealing with an overly large diaphragm.

The treble takes a back seat to the midrange and bass, but it’s not absent – just a bit lower in volume. Without any offensive peaks or dips, the treble performance is certainly all right.

However, the Volans is not the last word in resolution, especially at its price of USD$330. It sounds a bit rolled-off to me, and lacking in the finer nuances.

Luckily, this lack of resolution doesn’t manifest as audible grain – it just sounds a bit unrefined.

Hitting upon soundstage briefly: I don’t think the Volans has an exceptional soundstage in any way – it’s pretty much average, but certainly not bad.

The Astrotec Volans is an attractive-looking pair of IEMs that, for me, unfortunately doesn’t provide the performance to back up its looks.

Its bass, while not bad, is only average, with some looseness and lack of slam and texture in crucial moments. Its midrange sounds somewhat unrefined, with below-average resolution and an “off” timbre. Its treble is subdued and rolled-off, although not glaringly flawed.

Overall, I cannot recommend the Volans, which boasts neither the resolution nor the accuracy of tone that a USD$330 pair of IEMs should have. At a similar price, one could get the Etymotic ER4 or the Moondrop Blessing 2, both of which offer substantially better sound.

However, if you’re tempted to spring for the Volans, you can purchase them at HiFiGo.
Filed Under:
astrotec
dynamic driver
iem
tesla