Big on features and flexibility, but with small size comes low power.

Thank you to HiFiGo for providing the Hidizs H2 Lossless Bluetooth Receiver for review purposes. If you’d like to purchase the H2, it is available from HiFiGo for USD $65.

The Hidizs H2 is one of those products that cause you to think of a few things when you first see it. I’ll attempt to paraphrase some that flew through my mind. “How the heck did they fit all those features in something so small?” “I’m totally going to lose that thing.” “I probably should have bought the black one.” “Can that thing really do what it says it can?”

In something roughly the size of a square inch, the H2 boasts that it can function as a 24bit/192kHz DAC and a headphone amplifier. It also supports all the latest and greatest Bluetooth 5.0 codecs, including LDAC, aptX HD, and UAT. Noise-canceling microphone? Check. NFC pairing? Yup. USB DAC? Of course. Internal battery? Sure, it’s in there somewhere. 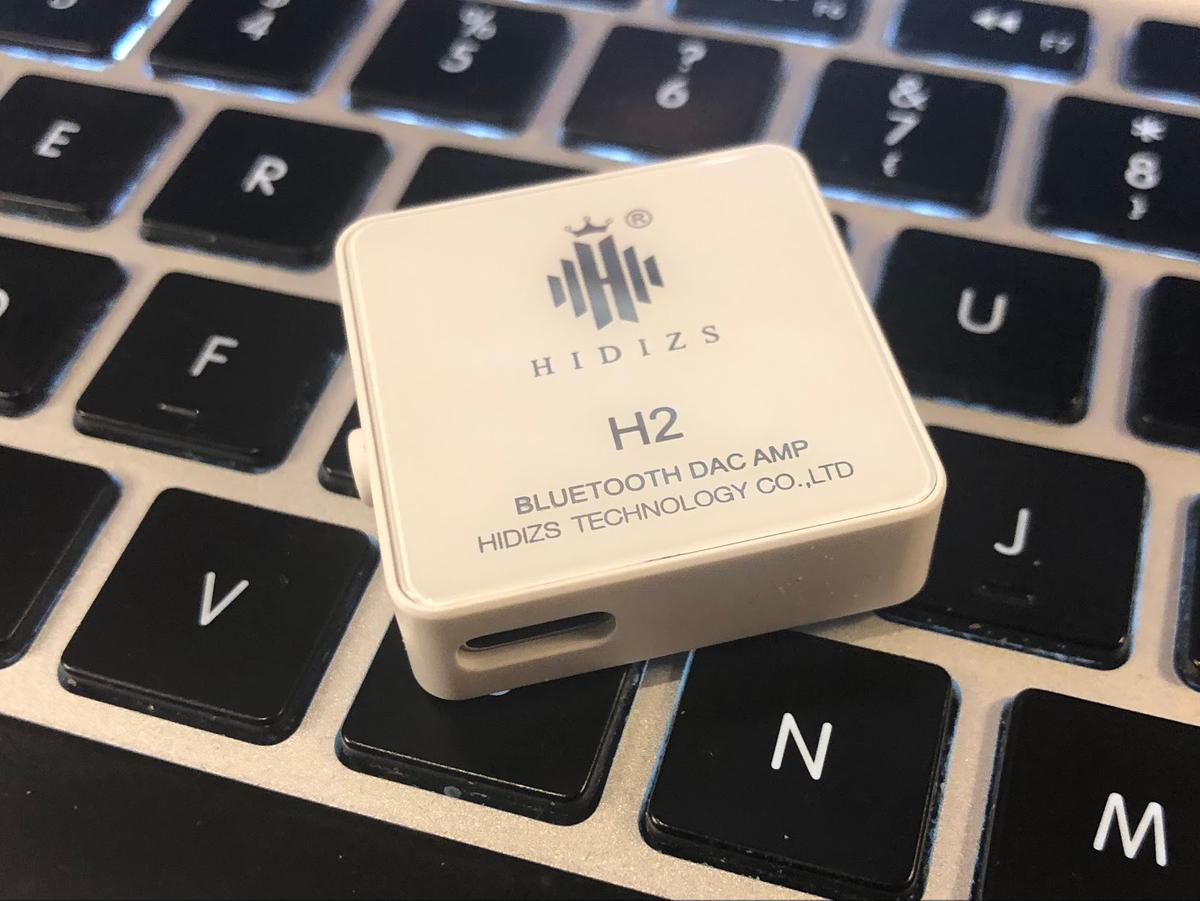 I’m quickly becoming a big fan of the Hidizs company. Their devices seem to consistently over-deliver on features and build quality at their very affordable price points. The H2 is no exception. My only real caveat is the low output power, which requires proper IEM pairing for best performance.

Available at Official Website
Available at Amazon
What We Like
What We Don't Like
Referring to this device as the ‘H2’ inevitably makes me think of the Hummer H2, an impractical and misguided attempt at turning a giant military vehicle into a civilian grocery getter. That enormous H2 couldn’t be further removed from this one.

On paper, the Hidizs H2 is very impressive indeed. This tiny wunderkind device seems poised to take over source duties for all of your on-the-go headphone collection. Versatile, portable, affordable, and almost unbelievably feature-rich.

Unfortunately, being tiny can be a double-edged sword. Just ask Ant-Man. Not only is the physical size diminutive, but the power output is as well. The Hidizs is rated at a mere [email protected] The question becomes whether this will matter to the end-user.

For reference, AudioScienceReview measured the US A2049 version of the Apple 3.5mm dongle as [email protected], far more than the H2.

Hidizs (pronounced ‘hid-is’) was founded in 2009 by a group of technicians with HiFi audio research and development experience. Their goal was “to produce a superior and affordable pocket HiFi audio device.”

In 2010 they started researching the global HiFi audio market, and they officially finalized their team in 2012. The AP100, launched in 2014, was the first music player created by Hidizs. In 2017, they funded the AP200 DAP through Kickstarter. 2018 saw the release of the AP80 DAP, and in 2019 the Hidizs team branched out and produced the Mermaid MS4 IEMs.

The size of the black cardboard box (approximately 11cm square and 5cm deep) leads one to assume the H2 will be larger than it is. I was genuinely surprised when I popped off the cover and found the tiny square device nestled inside. Further leading to this expectation is that the box’s picture is about 50% bigger than the device itself.

Hidizs makes classy packaging, appropriate and professional, regardless of cost. The H2 box has a simple render of the device and shiny Hi-Res certification logos on the front, and a full specification list on the back.

The included standard black charging cable is of surprisingly adequate length. I don’t know about you, but I hate super short and ultra-inconvenient charging cables that sometimes get bundled with gear. The short double-ended USB-C OTG cable is clad in silver metal connectors and features a transparent rubber sheath. It is both functional and attractive, not bad at all for a $65 device.

Perhaps I’ve over-emphasized how small the H2 is. Available in either black or white, you could (in theory, of course) purchase 12 of each color and use them on a standard checkerboard. The thermoplastic body material is made of Makrolon, a polycarbonate resin manufactured by the German company Covestro.

“Makrolon® polycarbonate is extremely robust, lightweight with glass-like transparency and is impact resistant – even at low temperatures. It also has a high dimensional stability and is easily molded, yet displays excellent heat resistance with a glass transition temperature of up to 148ºC.” – Covestro

The H2 is stuffed with technology, yet it only weighs 12 grams. The low weight tends to reveal its low price point, but it makes the H2 convenient to put in a pocket or clip to a shirt with the included clip case. Overall it feels reasonably sturdy and well crafted.

The bottom edge has a USB-C port. On the right is the round pairing/power/pause/call button and status LED. On top is the 3.5mm headphone output and pinpoint hole for the microphone. The left side features an extended single volume/track-skip button.

The near-ubiquitous Qualcomm CSR8675 chipset (also featured in the FiiO BTR5, Shanling UP4, and xDuoo XP-2Pro, to name but a few) handles the Bluetooth duties. It’s rated for Bluetooth 5.0 and can support stereo playback at 192 kHz.

The H2 also supports pairing to two devices and NFC.

The range is about what I expect from this sort of device. That is, dropouts will occur if you roam into other rooms or more than 5-10 meters away from the H2. I ran into no issues with usage in the same room.

The UAT audio codec is only compatible with Android phones and selected Hiby and Hidizs DAPs, such as the Hidizs AP80 Pro. Apple iOS users are limited to AAC Bluetooth connections.

AAC and aptX are virtually audibly indistinguishable, and both are an audible improvement over SBC. All Bluetooth codecs are inherently noisier than a wired connection, but this typically is only audible at high volumes (greater than 80dB) or high frequencies. AAC, SBC, and aptX codecs roll-off sharply after about 16kHz to minimize this issue.

While 16 kHz is still technically in the audible frequency spectrum, there is very little musical content at that extreme. After about age 25, we usually lose the ability to hear frequencies up that high.

Newer codecs, such as LDAC and UAT, roll-off at significantly higher frequencies and are less impacted by Bluetooth’s inherent limitations.

The H2 supports sampling rates up to 48kHz/16bit (with no additional driver installation) when connected via a USB cable to Android, iOS, Windows, and Mac OS. I even had luck getting it to work with Volumio running on a Raspberry Pi.

The internal lithium polymer battery is rated as 160mAh and charges in about 1.5 hours. Using higher quality codecs dramatically decreases runtime, with a lifespan ranging from about 2-7 hours. The H2 will simultaneously play and charge when connected via USB and will automatically revert to standby mode if unused for a prolonged time.

The Maxim Integrated MAX97220 chipset provides the H2’s output power. Hidizs recommends pairing headphones with an impedance range from 8-60Ohms. In practice, I’d suggest sticking to headphones with smaller drivers and those (including IEMs) that are relatively easy to drive (with lower impedance and higher sensitivity ratings).

The H2 is simply not powerful enough to provide a satisfactory listening experience for power-hungry headphones and IEMs. With extremely efficient IEMs, there is a slightly audible background hiss on silent passages in the music.

Frankly, I didn’t have high expectations for a $65 Bluetooth DAC with low output power. With those limitations firmly in mind, you won’t be unduly surprised or dissatisfied with the H2’s audio performance.

The sound quality of the H2 is primarily limited by its output power.

No, the H2 can’t drive inefficient or hard-to-drive headphones and IEMs the way they are meant to sound. But, choose a suitable, easy-to-drive IEM (which I firmly believe is the intended pairing for the H2), and the H2 proves to be a capable performer.

Let’s face it, those concerned with the highest of theoretical fidelities or with mega-buck IEMs, aren’t likely to select an inexpensive Bluetooth source device and expect it to perform miracles. The H2 isn’t truly a competitor for larger, more powerful, and ultimately far more expensive portable DAC/amps or DAPs.

For instance, the xDuoo XP-2Pro, a very similar product (on paper), simply offers far more power on tap (300mW @32Ohms). As a result, the XP-2Pro provides greater fidelity when paired with a much larger variety of IEMs and headphones. However, when paired with more modest IEMs such as the Thieaudio Legacy 3, Voyager 3, Moondrop Starfield, or the like, the Hidizs H2 is a fine-sounding option.

I believe the H2 has found a semi-permanent home as the source device for my vintage JVC DC-7 boombox, which I use for workshop audio. The small size and connection flexibility are much appreciated for this sort of usage, and at maximum volume, the headphone jack functions fine as a line-level output.

Without shining a pointlessly critical light on the H2, it is a clean and linear-sounding amplifier. Dynamics and separation are better with lighter loads, and when properly paired, the H2 sounds fine, with minimal coloration or distortion.

Detail and resolution seem entirely adequate for use out and about (or with my boombox). Far more expensive and powerful amplifiers spoil me, but with the budget in mind, the H2 ticks almost all the boxes you could hope for an ultra-portable device. How Hidizs fits all that technology into a device this small and light is mind-boggling.

I’m quickly becoming a big fan of the Hidizs company. Their AP80 Pro DAP is my go-to device for a portable audio source. Their devices seem to consistently over-deliver on features and build quality at their very affordable price points. The H2 is no exception.

My only real caveat with the H2 is the low output power, which requires proper IEM pairing for best performance. This requirement limits its versatility as a source for your entire headphone and IEM collection.

Yet, if you have an efficient pair of IEMs, are looking for connection flexibility, or want the ultimate in portability and a price well under $100, the H2 is difficult to beat. The full support of the Hiby Blue Android application is further icing on the cake.

Nope, it isn’t the ultimate ‘do everything’ device. But the Hidizs H2 offers the perfect solution for those looking to purchase something that jibes with its many strengths.