The all-around Apple AirPods continue to set the standard for wireless earbuds but it has evident struggles when used for gaming.

We bought the Apple AirPods for the purpose of this review.

The Apple AirPods are perhaps the most recognizable pair of wireless earbuds in the world today. This revolutionary pair of earbuds from Apple took the world by storm and is the one responsible for the rise of true wireless headphones we are seeing today.

The influence and the quality of the AirPods are unlike anything we have seen before. They are the golden standard of all-around wireless earbuds and anything that other manufacturers release inevitably get compared to the AirPods.

But, the question has to be asked — how good are they for gaming?

There are currently 2.5 billion mobile gamers who all probably use their own audio devices while playing. However, not everyone prefers actual gaming headphones, especially if they already own portable devices like the AirPods. But are they really good enough or should you invest in actual headphones for gaming? Let’s find out. 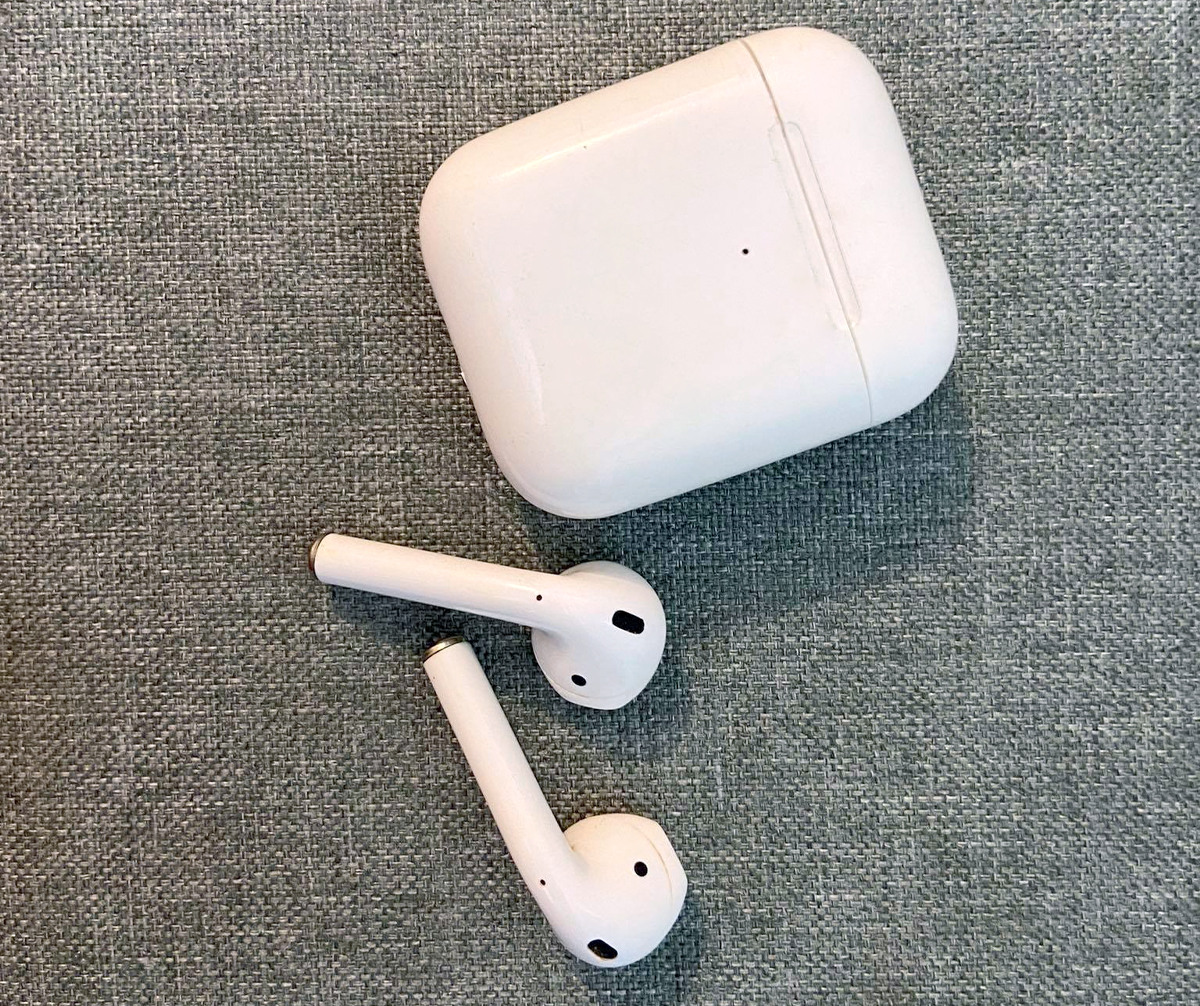 The AirPods' build is superb, the design is unique and game-changing, and the packaging is very well thought-out. But though the detailed sound quality should serve gamers well in certain situations, the occasional harsh input and output for high-frequency sounds can be bothersome.

Established in 1976 by the legendary trio of Steve Wozniak, Ronald Wayne, and Steve Jobs, Apple is undeniably one of the most popular and successful brands in history.

With an annual revenue of $2.74 Billion as of 2020, Apple is currently the most profitable technology company in the world. It boasts top-of-the-line quality products with ingenious functions and sleek designs.

Apple’s first earbuds were released as an inclusion for their iPod. Since then, Apple has made its earphones a staple inclusion in iPhones.

In 2017, Apple raised eyebrows when they ditched the 3.5mm port for their iPhone 7 which then gave birth to the EarPods with a lightning connector. At the same time, Apple announced the first-generation AirPods — the wireless version of the EarPods that would kickstart the demand for Bluetooth earbuds.

In an interview with Reuters, Apple CEO Tim Cook said that there are now 1.65 Billion active Apple devices. And with Apple continuing to expand its product lines, the number of Apple users should increase through the years.

The AirPods come in Apple’s signature minimalistic and compact packaging. The typical white and sturdy box from Apple, in this case, features an embossed image of the earbuds on the front side. And a picture of an opened AirPods charging case with the earbuds at the back.

Right off the gate, the box of the AirPods screams style and exclusivity. It definitely feels premium and that’s not just because it is from a premier brand, but also because the box itself is so well-made from one corner to another.

The embossed Airpods design at the front makes it stand out even more, giving a little boost to their minimalistic design.

Upon lifting the box cover, I was not presented with the AirPods just yet. The first item inside is a pouch with the manuals and other documents. This is followed by the Airpods in their charging case wrapped in a thin plastic film. And the Lightning to USB-A charging cable, neatly fastened with Apple’s usual cardboard locks.

All in all, it’s a pretty straightforward unboxing experience. But I really appreciate the thought and detail Apple gave to its packaging. Each element felt snug and fit just right, with no unnecessary clutter.

In terms of design, Apple didn’t really change anything much from the AirPods’ first incarnation. It sports the same semi-open design that Apple has been using for their wired EarPods since 2012 and all the physical dimensions from AirPods 1 were retained.

I found the AirPods 1 quite nice and ingenious when they were first released, so I really didn’t mind the lack of design changes for the 2nd generation AirPods.

One drawback to this, however, is the lack of replaceable ear tips — one that they fixed in the later version (the Airpods Pro).

It fits perfectly for some and horribly for others, the point is that its one-size-fits-all design is a hit or miss. Lucky for me, it did fit well plus I’m the type of person who prefers earbuds that do not go deep into the ear canal, so it was a win-win for me.

The AirPods 2 feature an indicator light outside of the box which differentiates it from the previous version. As of writing, Apple still offers these AirPods in white only and we don’t think that’s going to change anytime soon — which is quite a bummer. Yes, white may be a timeless color, but I’m sure others who are as daring as me would appreciate colored AirPods.

Nonetheless, the AirPods’ design is unique as it is and they also remain to be one of the most recognizable wireless earbuds today. You can really spot that long white stem with a silver bottom from a mile away to the delight of many users.

The AirPods feature Bluetooth 5.0. Compared to the older versions, Bluetooth 5.0 takes less time to compress and decompress audio signals. This version can reach up to 2 Mbps and this high bandwidth allows less audio lag and quicker response time, which are two things you want to see in your wireless gaming earbuds.

Compared to wired earbuds though, Bluetooth 5.0 still has miles to go in terms of masking latency. To add to that, the AirPods only feature SBC and AAC codecs. And having aptX Low Latency (LL) on paper might have made it more attractive to gamers.

Fortunately, the AirPods feature the new H1 chip. According to Apple, this delivers up to 30% lower gaming latency compared to the previous W1 chip from AirPods 1.

On a real-time test with my iPhone, I did experience some latency issues but I only noticed it once I put my ears into it. Honestly, the issue was close to imperceptible and casual gamers probably won’t get bothered much by it.

The AirPods are also perhaps one of the most stable earbuds I’ve ever tried and I’ve never experienced any form of audio dropout with them.

The AirPods are light and simple. Each earbud weighs 4g and there are no physical buttons or anything else on them.

Don’t let its featherweight fool you, though, because this is still an Apple product so you can expect it to be built well up to the smallest details. The hinges on the case are well-built, the magnetic lock on the case lid is snappy and strong, while the weight of the earbuds is well-distributed.

Although these are made with mostly plastic, they do not appear cheap and feel sturdy enough to last through daily wear and tear.

As mentioned earlier, comfort and fit will vary from one person to another, because of their one-size-fits-all design. They do not have any sort of ear tips but they do feature a semi-open ear design that makes them breathable and helps relieve ear fatigue.

In my case, they snugged in very comfortably and they were so light that I didn’t even feel like I was wearing them. Despite the fact that all sides of the earbuds were hard surfaces, I wasn’t bothered by anything at all and that, to me, is really comfortable.

Also, for those who are more comfortable with earbuds that do not go in very deeply into the ear canal, the AirPods are for you.

Apple never disclosed the technical specifications of the AirPods’ built-in mics. Despite that, the mic quality of the AirPods won’t disappoint you and they are definitely well-made. They are very clear, especially when used while gaming at home.

In-game, we really can’t say anything bad about the AirPods’ mics. They’re clean and focused on your voice, plus they do not seem to pick up a lot of indoor sounds like electric fans or keyboard sounds.

However, when used outside, they absorb quite a lot of the ambient noise. My voice also sounded a bit hollow in the mic quality test with background noise. I can still be heard and understood, yet one can easily be distracted by the noise.

They do sound a little too harsh when it comes to higher frequency sounds, though, so just be careful with in-game screams and sudden reactions.

Much like with the AirPods’ mics, Apple has also been mum about their earbuds’ drivers. Nonetheless, they would not be recognized as one of the best all-around earbuds if it weren’t for their good sound quality and their in-game performance isn’t bad as well.

The AirPods are semi-open earbuds with the right balance of an open and a closed soundstage. The bass is a little lacking due to its open characteristic but even this can vary from person to person. Personally, the AirPods fit well on me so I probably did feel a little more bass than those who have larger ears.

Unfortunately, much like their mic quality, the bane of the AirPods sound quality is a high-frequency sound.

Playing Call of Duty: Mobile, sounds with higher tones such as timer ticks and even high-toned gunshots with submachine guns hurt my ears a little more than they should. They can also get suddenly loud especially when you’re dealing with close-contact gunshots in-game.

Spatial audio or 3D pinpointing would have been great, but the absence of these features on the AirPods just confirms that the earbuds were really made for purposes outside of gaming.

Other than that, the AirPods performed decently clear and I did not have a hard time hearing my teammates.

The EarFun Free 2 would have a good matchup against the AirPods. These two earbuds may seem like polar opposites, but what makes this interesting is how one’s strength is the other’s weakness.

In terms of Bluetooth version, the EarFun Free 2 has the upper hand with Bluetooth 5.2 under its belt. In terms of design and build quality, though, the AirPods would get my nod for their premium feel and also because I am not that into in-ear monitors (IEMs) like the Free 2 that dive deep into your ear canal.

Perhaps the biggest advantage of the Free 2 against the AirPods, though, is its low latency mode. The low latency mode is a handy feature that gamers would surely appreciate. Again, the AirPods’ latency issues were not that evident to me but the EarFun Free 2 would get even better results.

No one can deny the intricate detail Apple took to make these AirPods. Their build is superb, the design is unique and game-changing, and the packaging is very well thought-out.

But one thing is for sure — as great as the AirPods are, they were surely not created with gamers as the focus.

The detailed sound quality should serve gamers well in certain situations, but the occasional harsh input and output for high-frequency sounds can be bothersome. The lack of basic immersive gaming features like spatial sound also makes buying actual gaming earbuds much more practical.

In the end, though, the Apple AirPods will probably go down as one of the most iconic and influential earbuds in history. This is an all-around juggernaut that can practically stand toe to toe with any earbuds it faces. And, for casual gamers who will probably use the earbuds a lot for non-gaming purposes as well, the AirPods are still strong contenders.