Transform a Raspberry Pi into a high-end music streamer/player with the comprehensive moOde Audio software package.

Since building a couple of Raspberry Pi-based music streamers, I’ve been on the hunt for the perfect music playback software package. I started out with the comprehensive Volumio program, but I found it struggled a bit with my large local digital music collection, and it appears to be transitioning to a subscription-based service for advanced features.

Eventually, I ended up going in the opposite direction with the ultrasimple, appliance-like Ropieee Roon Endpoint software, which abandons any non-Roon-based local file playback but fits my primary needs pretty well.

My priorities for music software for a Pi-based player are (in order of importance):

Another Pi-based, music software package that seems to get frequently mentioned online is moOde Audio, developed by Tim Curtis around 2014. moOde is a custom-built operating system based on Debian GNU/Linux. Version 7.3 is the most recent release at this point of writing.

At first glance, its feature set looks similar to Volumio, but moOde is entirely free. That’s a win in my books, so I decided to give it a whirl. What follows are my experiences and observations, what I like and what I do not. 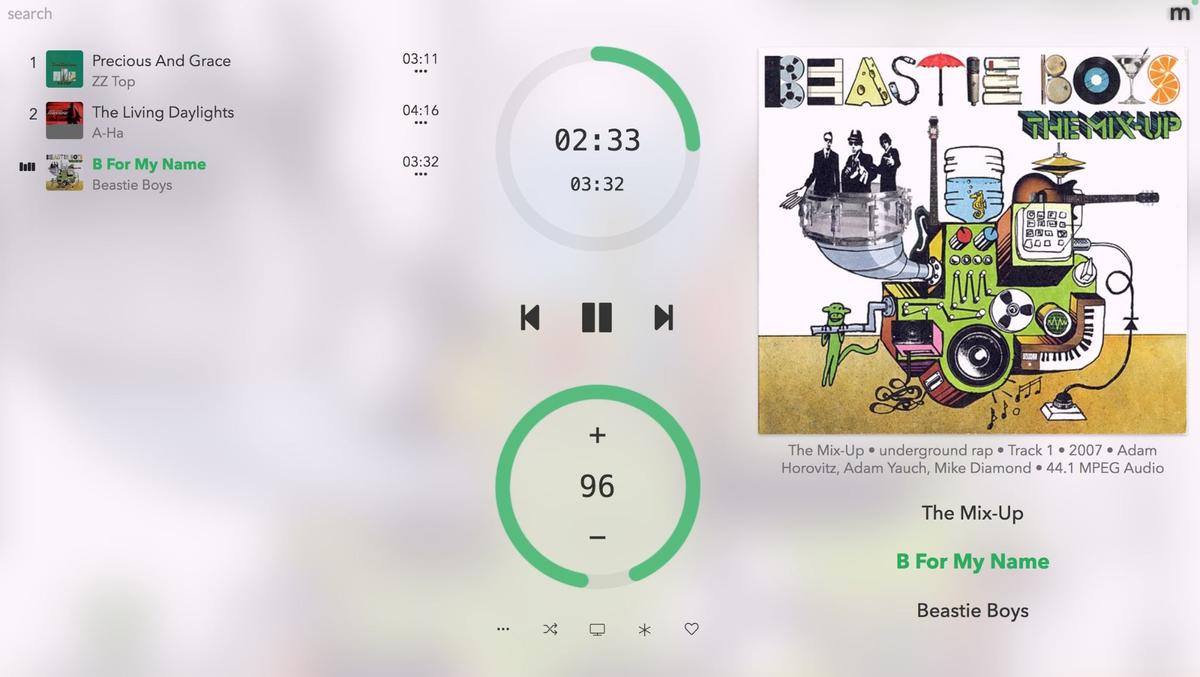 If you are currently a Volumio user or are new to the Raspberry Pi music player scene, you owe it to yourself to try moOde Audio out and see if it is a fit for you. moOde Audio development is far from static and is continually evolving and adding feature support. Version 7 is a polished and mature offering, and I look forward to checking out v8 whenever it appears.

How to Install moOde Audio on Raspberry Pi

Regardless if you’ve ever installed software on a Raspberry Pi, the process is pretty straightforward.

Remember that with a Pi, swapping the Operating System (OS) is as easy as plugging in a new SD card!

Or, at least, that’s how simple it SHOULD be. Of course, further setup is required to configure such things as the network connection, DAC, screen, etc. It depends on the individual software as to how easy (or not) these additional steps are to complete.

The basic installation of moOde Audio onto the SD card went flawlessly for me. I popped it in the Pi and the initial setup process went scrolling by on the screen. Of note, the default screen orientation was correct for my setup in a SmartiPi Touch Pro case (something that is not always the… err… case). However, it ended with a command prompt on the screen, and not the moOde visual interface I was hoping for.

Hmmm… where do we go from here? Clearly, additional setup steps are required.

moOde, like many of the music playback software options for the Pi, is designed to be headless, that is, accessed via a web interface on a computer and not with an attached screen. So it shouldn’t be a surprise that the screen isn’t enabled by default.

How to Setup moOde Audio

A primary difference between Volumio and moOde is that Volumio uses plugins that can be installed, removed, and individually configured, while moOde incorporates all its options into the configuration menu.

With a brief stop at the official moOde support forum, I quickly located the official Setup Guide. While comprehensive, it’s unfortunately just a simple text document, so the format may scare off some newbies who are expecting a visual guide with pictures.

Without reproducing the entire setup process here, I’ll include a few notes that I discovered along the way that may be of use to you.

Most of moOde Audio’s settings default to OFF, so it is necessary to manually enable all the features you want to use.

Unfortunately, after completing the above, Spotify appeared to work but no sound could be heard. This required me to dive back into the forum to discover that I was far from the only one having this issue with the 7.x versions of moOde and Spotify.

Eventually, with a bit of trial and error, I kludged together a fix that seems to work, but does require you to do a bit more work. The first step is to turn on terminal access.

This sets the proper audio output for Spotify and sound will be passed through to the DAC. The fix seems relatively permanent as it still works after disconnecting power to the Pi and rebooting.

In order to access the RoonBridge Renderer settings under Configure → Audio, it is necessary to once again jump into the terminal as we did above for Spotify. The full instructions are located in the moOde forums.

By completing all the above (which took me a few hours) I configured moOde to do essentially everything that I want it to do. There are a ton of options located in the Configuration settings, and I suggest you do your own trial-and-error to figure out what works best for you.

Once you’ve got moOde up and running, it’s time to check out all the features that it has to offer.

The user interface is simple and relatively attractive. It’s broken into three main sections with the playlist on the left, volume and track completion represented as two circles in the middle, and album art and information on the right. I find the Volumio interface a bit prettier overall, but it is busier compared to the cleaner moOde design.

Once I hammered out how to get everything working, using moOde has proven to be relatively trouble-free. The only real bug that seems to crop up frequently is that the Pi display changes over to the default Chrome browser “Aw, Snap! Something went wrong while displaying this web page” error after a while. Clicking the Reload button refreshes the screen and brings back the moOde user interface, so it’s just moderately annoying rather than a deal-breaker.

I haven’t yet discovered a fix, but with this sort of actively developing software, new versions full of bug fixes are already in the pipeline.

When using remote access via a computer, the “Aw, Snap!” error screen doesn’t seem to appear, so headless users may never run into this issue.

I’m not entirely enamored with the plain screens displayed when using RoonBridge or Spotify Connect, which just show the active connection name and a “disconnect” button mid-screen. I prefer the album art and simple controls displayed by Ropieee when playing tracks from Roon – after all, that’s the point of having a screen on the Pi in the first place. So only seeing “RoonBridge Active” is a bit of a disappointment.

See Also: A Beginner’s Introduction to Roon – What is it and Who is it for?

No on-screen controls mean you are forced into using the Roon application on another device to control all aspects of playback. The same goes for Spotify.

Of course, album art and onscreen controls display properly when using the built-in player, so this won’t be a problem for all users.

Sound quality is really only limited by the quality of your DAC and other hardware components, and I’m happy to report that everything seems to work fine with moOde. It’s an audibly transparent user interface for the Pi that allows users to access their music in a variety of methods.

Now that I’ve spent time with moOde Audio, Volumio, and Ropieee, I can appreciate that they all offer different things to users with a variety of needs. moOde and Volumio are very similar programs, and although Volumio has a slightly prettier interface and more intuitive plugin support, its decision to paywall some features behind a subscription fee means that I have to give the nod to moOde.

moOde offers much of the same feature set, and you just can’t beat free!

Ropieee is a different beast. It’s far more streamlined, with a focus on Roon playback and little else. However, it offers onscreen controls, cover art support, Spotify Connect, and a useful clock display when not active. This means that it fits my particular set of requirements almost perfectly. As always, YMMV.

If you are currently a Volumio user or are new to the Raspberry Pi music player scene, you owe it to yourself to try moOde Audio out and see if it is a fit for you.

moOde Audio development is far from static and is continually evolving and adding feature support. Version 7 is a polished and mature offering, and I look forward to checking out v8 whenever it appears.