In a saturated market of budget IEMs, the Geek Wold GK10 seeks an unoccupied niche with a tribrid arrangement featuring two piezoelectric drivers.

Not much is known about the elusive manufacturer of ultra budget IEMs, Geek Wold (no typo there; that is really the name of the company). Before the GK10, the subject of today’s review, Geek Wold released only one other product, the GK3, which were priced below USD$25.

The GK3 were received without much fanfare. The opinion of most reviewers was that, while they weren’t the worst thing on the market, the tonal balance was pretty off, the treble and upper mids were shrill, and the overall product was about what you’d expect at around USD$25. 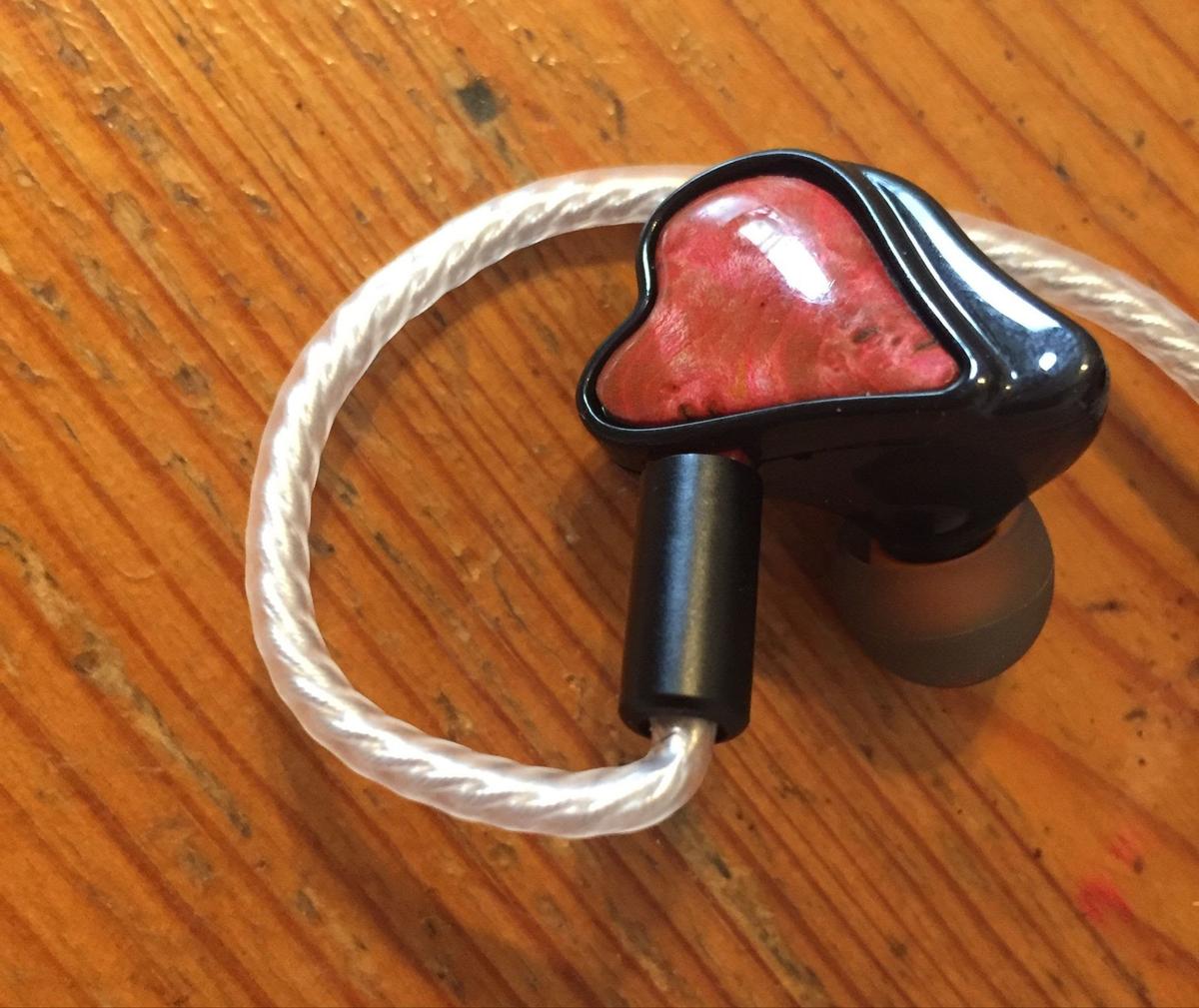 The GK10 are a somewhat dark, moody-sounding pair of IEMs with a big ‘ole heart on their faceplates. They offer excellent resolution - for the price - in the upper treble, but trying to fully appreciate that is a bit like trying to appreciate unusually high-quality rice in a gas station sushi roll. Sure, it’s there, but it doesn’t amount to a great high-fidelity listening (or eating) experience.

In a perfect world, anyway. Often, hybrids have issues with coherence through the entire audible frequency spectrum.

Of course, a hybrid at the GK10’s budget range is nothing new. What matters is how they perform. Can the GK10 stand up to the competition and prove to be one of the better pairs of affordable hybrid IEMs on the market?

They say great things come in small packages, and if this is one’s sole criterion, the GK10 must surely be among the greatest IEMs of all time. The packaging is very, very minimal and small.

Despite that, Geek Wold actually manages to pack in a fairly reasonable lineup of accessories. Okay, it’s really just the IEMs, a cable, and some spare eartips, but the included eartips go beyond just the typical Small, Medium, and Large, and add some eartips of different varieties, which is always a treat, especially for IEMs of this price. Good on you, Geek Wold!

The GK10’s cute heart-shaped “stabilized wood” faceplate is one their greatest assets, at least according to the advertising material: the Amazon description called them “an adorable gift for different seasons, birthdays, holidays and anniversaries.”

Indeed, the fact that they use wood prominently in the design is charming. The “stabilized wood” material is genuinely gorgeous, full of unpredictable patterns and fascinating wood grain. For me, it’s kind of a shame that it has to be carved into a chintzy heart shape, but I’m sure not everyone will see it that way.

As for the rest of the build, it’s plasticky and feels perhaps slightly less premium, but who cares at this price point?

Comfort-wise, the GK10 are fine. They aren’t obnoxiously large and don’t immediately fall out of my ears. However, they aren’t a perfect fit for me, tending to become gradually looser over time – I wouldn’t go running with these IEMs, for example. Still, this is very variable between different people and different ear shapes, so who’s to say what’s best?

They are slightly below average at isolation. They can block out sound in most settings, but I wouldn’t count on them to fare well in a train or noisy subway.

Overall, I find the GK10 to perform slightly below average for this price range. They have a lack of refinement that manifests differently throughout the frequency range, and the tonality is wonky and mildly unpleasant for most music.

The GK10 are not horrible and work reasonably well for certain types of electronic music, but they just have… problems.

Of these problems, the most prominent is some wonkiness in the lower-to-middle midrange tonality. More on this later, but the lower-mids and upper bass have a slightly boomy quality, and there is an etch in the upper-mids / lower treble that can be kind of unpleasant.

Actually, the GK10 reminds me a bit of a budget version of the Shuoer Tape IEMs, and many of my problems with that pair of IEMs carry over to this one: boomy bass, lack of treble coherence, and etched upper midrange (though the shout isn’t quite as bad here as it is in the Tape).

Some have complained about the muddy quality of the GK10’s bass. In my experience, that comes down partially to actual bass distortion/bleed and partially down to the sucked-out midrange, which makes any bass bleed much more obvious.

The bass of the GK10 does have a somewhat stiff, plodding quality, which damages performance when it comes to basslines and bass guitar. It always sounds a little bit dull and samey.

When it comes to kick drums, though, I actually think the GK10 performs OK: the bass has quantity, making the GK10 a fun pair of IEMs for electronic music of all stripes. Even if the bass is a bit one-note (again, “stiff” is a word that comes to mind), it still hits, and it can get you grooving without the extreme muddiness that afflicts many bass-heavy IEMs of this price range.

The bass is a mixed bag, but at times I genuinely do like it.

The GK10’s midrange is odd. It’s something that I could imagine getting used to, but coming to it from other headphones, the GK10 seems quite oddly tuned. I think there are some flaws that would continue to affect my listening even after getting used to the basic tonality.

Here’s the issue. Most IEMs with a bass bump see a slight dip around 500-600 Hz or so to eliminate boominess and cleanly “separate” the bass from the midrange. The GK10 seem similar to that, but instead, the recession is at 1 kHz, an odd tuning choice that gives the midrange a somewhat “boxy,” boomy, and lo-fi quality.

Basically, vocals and instrumentals sound pretty weird. Again, the longer I listen to them, the more my ears adjust, but the midrange does retain a sort of essential “boxy” quality.

The upper midrange also has a somewhat etched or grainy quality that can be somewhat harsh in recordings with a lot of upper midrange content. Things like this are not unheard of even in high-quality products, like the Sennheiser HD580, but it’s somewhat more extreme here.

I do find myself getting used to the GK10’s midrange more and more, but switching to a more conventionally tuned earphone does yield a sort of “oh, that’s what was wrong” experience.

At its best, the GK10’s midrange has a sort of darkened, moody quality to it, with a powerful, foregrounded lower midrange and just a little sheen of light in the upper midrange. At its worst, it just sounds tubby.

The glare or etch in the upper midrange also extends to the lower and mid-treble, and songs with a lot of lower-treble content (say, 6-7 kHz) can get very irritating. It’s not that the GK10’s frequency response is exaggerated at this range – it’s just that the driver that handles this frequency range is clearly having issues. Everything is very vague and fuzzy and grainy.

Above that? The upper treble is very nice and resolving (for the price), with no real problem areas. If it weren’t for the lower treble, I’d have no issue giving the GK10 full marks for treble performance.

This points again to the typical coherence problem with hybrids. One gets the feeling that the treble is segmented into distinctly different parts corresponding to different drivers, each with radically different qualities. While the upper treble is pretty nice, it has to reconcile with the poorer low treble performance.

The Geek Wold GK10 is available on Amazon.

The GK10 are a somewhat dark, moody-sounding (or boxy) pair of IEMs with a big ‘ole heart on their faceplates.

They offer excellent resolution – for the price – in the upper treble, but trying to fully appreciate that is a bit like trying to appreciate unusually high-quality rice in a gas station sushi roll. Sure, it’s there, but it doesn’t amount to a great high-fidelity listening (or eating) experience.

The few times that the GK10 really shone were when I played genres that relied on a darker, more propulsive sound: house music, dub, and other genres with a similar sound. When I listened to acoustic or rock music, the deficiencies were much more obvious, and I’d recommend that people who listen primarily to non-electronic music steer clear.

If they were more expensive, I’d take more issue with the GK10’s problems. As it is, they don’t represent a “good” value, and I surely can’t recommend them over the equivalently-priced Tin T2, but they do offer some decent qualities.