TForce may be a new kid on the block, but the Force is strong with them!

TForce Audio is a new player in the CHI-FI industry, and the Yuan Li is their debut pair of IEMs.

Yuan Li (or actually in Chinese parlance, Li Yuan) was the first emperor of the Tang Dynasty in China. The Tang Dynasty is regarded by many historians to be the golden age of ancient Chinese civilization. Thus, the Yuan Li have a big reputation to live up to. It definitely is not easy being named after the founding monarch of the Tang Dynasty!

Fun fact: the Yuan Li are the first in a trilogy of releases from TForce Audio. A hybrid and a tribrid are planned for episode 2 and 3!

Forgive the Star Wars puns, but is the Force strong with the Yuan Li? Will this be the launch of a new hope? Will the empire strike a home-run here? Read on to find out! 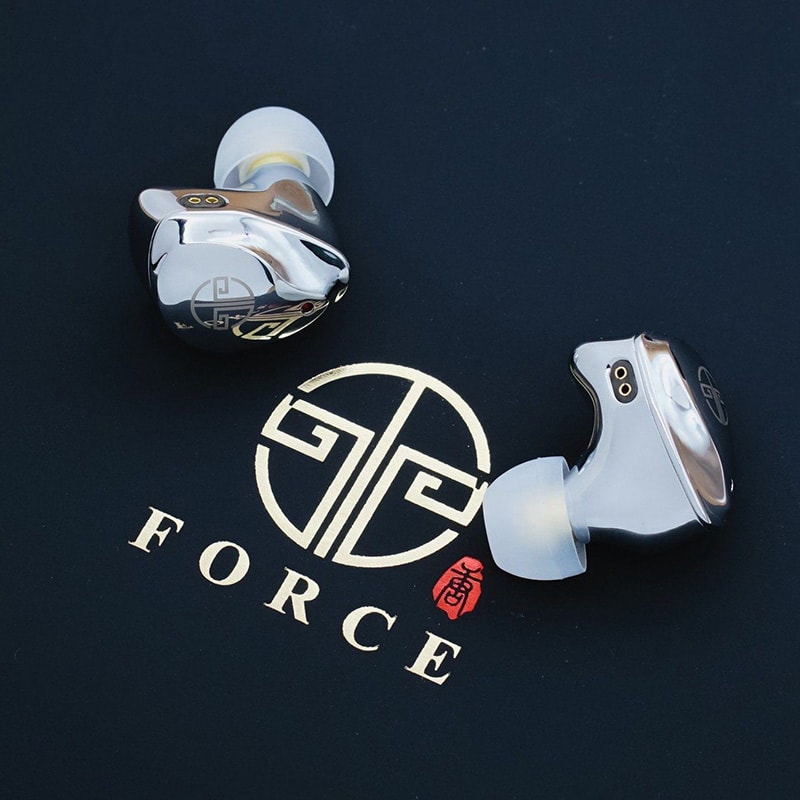 Tonality, timbre, and technicalities are good for a budget single DD IEM, and I'll even stick out my neck to call the Yuan Li a baby Tanchjim Oxygen. Generous accessories and a beautiful shell complete a package fit for royalty.

TForce Audio, as discussed, is a new entrant into the ultra-competitive CHI-FI market.

As Master Yoda from Star Wars would say, “new they may be,” but TForce boasts a team of audio engineers who have years of experience working for other CHI-FI OEM manufacturers.

In keeping with the theme of Chinese royalty, the TForce Yuan Li come in packaging featuring Chinese motifs and calligraphy. Packaging maketh not the IEM, of course, but this is a unique and memorable design compared to the hackneyed Anime otaku packaging that some companies are trying to ride on for sales.

The accessories are quite generous and everything is quite usable out of the box. One doesn’t really need to source for aftermarket gear.

The included cable is on the thinner side and tangly. Also, the cable has microphonics, so it is advisable to push the chin cinch up to your neck or hold the cable down with a clip to minimize the cable from swinging about and causing cable noise.

I like that this cable features 2-pin connectors, as I have had my fair share of MMCX mishaps with frequent cable changes.

The included leatherette case is classy and sturdy. It is large enough to fit the Yuan Li and cable inside with room to spare. I think the case mixes good protection with an air of elegance. If I could paint a picture, it resembles an emperor riding on horseback, clad in a leather breastplate.

The Yuan Li’s shells are made of aluminum, and are well built. TForce’s logo is emblazoned on each shell, like a regal seal.

The mirror-like finish is really beautiful, but it may be a potential scratch or finger-print magnet. So treat these babies with care!
Isolation on the Yuan Li is about average, as per most vented IEMs. The Yuan Li have passed my subway test, and they are suitable for use outdoors, but they won’t beat some unvented BA type IEMs in terms of isolation.

The TForce Yuan Li are very comfortable and fit well. They are of average weight and a small concha protrusion is added to the design to give a more secure fit. I have had no comfort issues using the Yuan Li for marathon listening sessions.

I didn’t experience any driver flex, but driver flex is partially dependent on ear anatomy and the types of tips used, so it is a YMMV situation.

The TForce Yuan Li are advertised to use a 10mm DLC (Diamond-Like Carbon) diaphragm. DLC drivers are purported to be light, yet sturdy, and DLC is a popular material used in dynamic drivers (DD).

The TForce Yuan Li can be driven from lower powered sources, but they scale tremendously with amping. In fact, you won’t do the sound justice without an amp, as soundstage, dynamics, micro-details and bass tightness all improve when the Yuan Li are amplified.

To garner feedback, TForce previously sent pre-release units of the Yuan Li out to testers and I had the privilege of trying the original tour beta version. The pre-release version had a mild V-shaped tuning with excellent resolution, authentic timbre, and good technical performance. However, they had a hot upper mids region, which could lead to shoutiness and fatigue. This was a common area of criticism garnered from the tour participants.

I am pleased to report that TForce did listen to feedback and was willing to be flexible. They launched the final version with a toned-down upper mids. This however, did result in a slight loss of resolution compared to the pre-release version.

For a budget single DD set, the Yuan Li have good imaging, micro-details, and instrument separation. However, the soundstage is on the intimate side, though the Yuan Li make up for having a slightly narrower soundstage with good pinpoint imaging. To be honest, I’d rather have this tuning than something with a large soundstage but fuzzy and nebulous imaging.

Timbral accuracy on the Yuan Li is great as per its single DD roots; vocals and acoustic instruments sound very organic and natural.

The Yuan Li’s bass is just slightly north of neutral. This set doesn’t have the most extended sub-bass and they do lack rumble, so bassheads may need to look elsewhere. But what the Yuan Li cede in bass quantity and extension, they make it up in having great bass quality. The Yuan Li sport fast and tight bass with above-average texturing and minimal mid-bass bleed.

The Yuan Li go for good bass quality over quantity.

The midrange on the Yuan Li is slightly depressed, and the lack of a bigger mid-bass may give a feeling of lack of warmth in the lower mids. Nevertheless, the midrange is very transparent and clear, with good layering heard.

I’m also glad to report that compared to the pre-release version, this final version of the Yuan Li has tamer upper mids.

Having said that, if one blasts the music at higher volumes, due to the Fletcher Munson curve), the 3 kHz area can occasionally be a bit jarring.

In addition to playback volume, ear anatomy (which affects pinna gain), sources, and the type of ear tips used can also affect the perception of the upper mids region. At moderate volumes, the Yuan Li’s upper mids are generally safe and non-fatiguing and suited for longer listening sessions. On the whole, I like that the vocals can cut through in the mix without veering into shouty territory.

The Yuan Li’s treble has good clarity and micro-details. While the Yuan Li’s treble is not the most extended, they manage to balance a fine line of not becoming sibilant or fatiguing. Trebleheads may want a little bit more air though – but this is nitpicking.

I’ve compared the TForce Yuan Li with some other single DD sets. Hybrids and pure BA sets were left out of the comparison as the different transducer types have their own pros and cons.

The HZSound Heart Mirror are a neutral bright set.

Like the Yuan Li, the Heart Mirror sound only meh from a lower-powered source, but scale beautifully when amped. Technicalities (soundstage, imaging, instrument separation), timbral accuracy, and tonality are all better on the TForce Yuan Li, and I do think the Yuan Li are the more accomplished IEM.

The Yuan Li are also more versatile for various music genres due to their U-shaped tuning, compared to the Heart Mirror’s flat bass.

The venerable Tanchjim Oxygen are in a different price bracket, but they are one of the benchmark single DD sets. In a nutshell, the Oxygen beat the Yuan Li in technicalities (soundstage, imaging, instrument separation, details) and they also have a more natural timbre. The Tanchjim Oxygen have better bass texturing and also more extended treble and more air. In addition, the Oxygen are easier to drive.

Although the Tanchjim Oxygen are around 2.5 times the price of the Yuan Li, I feel the Yuan Li can hit about 70% of the technical performance of the Oxygen. In terms of price to performance ratio, the Yuan Li have better value and less diminishing returns.

In fact, I’ll call the Yuan Li a baby Tanchjim Oxygen, and perhaps those that can’t get the Oxygen due to availability or price, can consider the Yuan Li as a cheaper alternative.

The HE01 are easier to drive. The Yuan Li have better included accessories and also have a more solid build compared to the HE01’s plasticky shells.

Do note that the 2-pin connector on the HE01’s housing is round and protruding, and this limits the number of aftermarket 2-pin cables that can be paired. There isn’t this issue on the Yuan Li.

The Yuan Li are one of the better budget single DD releases of 2021. They sport a balanced tuning that scores highly in most areas, other than perhaps subbass extension and soundstage.

Tonality, timbre, and technicalities are good for a budget single DD IEM, and I’ll even stick out my neck to call the Yuan Li a baby Tanchjim Oxygen. Generous accessories and a beautiful shell complete a package fit for royalty.

TForce has really hit the ground running with their debut launch, this new kid on the block has shown that they are a force to be reckoned with (no pun intended)! TForce also seems like a company that is willing to listen to consumer feedback, and this will hold them in good stead for their future releases.

Due to their namesake – the first Tang Dynasty emperor – the Yuan Li have a heavy weight to carry, but they have successfully stamped their authority and sovereignty on the budget CHI-FI market. Indeed, they have set the foundations for a thriving and long-lasting dynasty. I really look forward to the two successors planned in the TForce trilogy!

Long live the king and may the Force be with them!