We bought the HyperX Cloud Alpha S for the purpose of this review.

What distinguishes HyperX headphones from other gaming headsets? The answer is simple, sound quality. The HyperX Cloud II and the HyperX Cloud Alpha S are highly regarded for their sound quality, and this is the reason that almost 20 percent of professional gamers are using these headsets. Priced competitively and affordable, HyperX proves you don’t need to drop top dollar to receive top-quality performance.

Beyond sound quality, HyperX headphones feature 7.1 surround sound and impressive noise cancellation. They are also noted for being constructed from top-grade materials, with impressive functionality and comfortable design. They almost sound too good to be true. Can an affordable headset really be this impressive? That’s exactly what we are going to find out today. 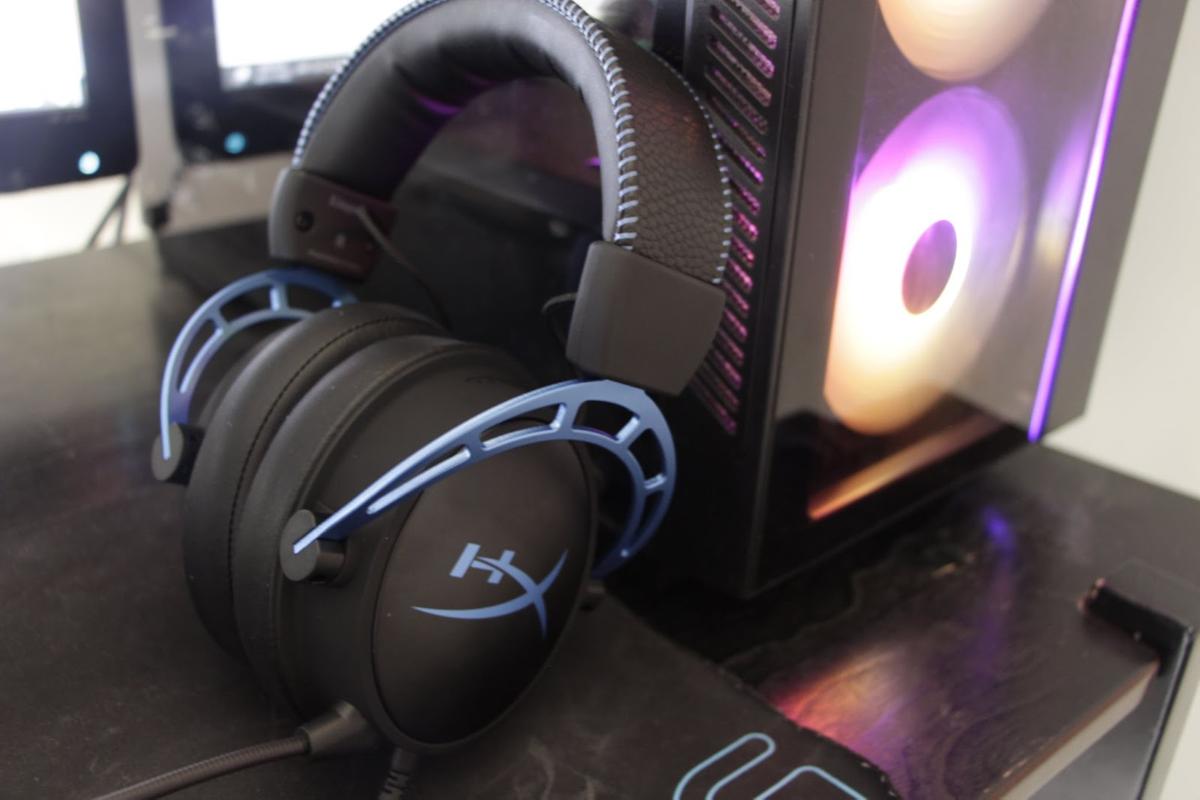 I get why professionals are using the HyperX Cloud Alpha S. They feature the best sound quality I have come across in budget gaming headphones and they live up to all my expectations. Their outstanding comfort and professional-grade sound quality are what sets the HyperX Cloud Alpha S apart from the pack. HyperX has set a new standard for budget gaming headphones.

Are the HyperX Cloud Alpha S good enough for the professionals? Does the sound quality live up to these lofty expectations? Are these headphones as good as the name they have made for themselves?

In 2002, Kingston Technology Corporation created a gaming division known as HyperX responsible for producing high-quality memory modules and peripherals. As of June 1, 2021, HP took over the gaming peripherals division of HyperX, while Kingston kept the memory side of the business.

HyperX have shown large support to the gaming community by sponsoring two of the biggest gaming tournaments worldwide, the Intel Extreme Masters and the Dreamhack festivals. They also sponsor big name streamer Pokimane and NBA players such as Gordon Hayward and De’arron Fox. The company even owns the HyperX esports arena in Las Vegas.

Simply put, the Hyper X Cloud Alpha S are neatly packed. The headset and detachable mic are firmly held in the box by a plastic mold on both the top and bottom to prevent any movement inside. Both ear cups are covered with a plastic film to protect them from scratching. There was no foam padding with the packaging, but despite this, the headset arrived in perfect condition.

Under the plastic mold, there’s a travel bag that contains the USB audio control mixer, and additional cloth ear cushions. None of the parts were crammed in the box and felt like everything was carefully placed. Unboxing is a simple and enjoyable experience.

The travel bag makes it easy to take the HyperX Cloud Alpha S on the go. It fits the entire headset and wiring, and prevents any scratching of the headphones.

Aesthetically, the HyperX Cloud Alpha S are satisfying, but nothing too flashy. Blue stitching borders the headband and follows the same colorization on the metal connectors and HyperX logo on the ear cups. The rest of the headphones and ear cups are black and I feel it works well with the secondary blue.

The metal headband connectors have a unique and original design. They connect to the front and back of both ear cups and give the headset a sleek design feature, but I will admit they do make the ear cups look a little bulky.

The HyperX Cloud Alpha S are offered in both blue and blackout colors.

A feature I have not come across before are the Bass adjustment sliders located at the back of each ear cup. The sliders allow you to immediately adjust the bass levels in each ear cup to high, medium, and low. To say the least, I am very impressed with how well they work.

Another area to note is that the mic and 3.5mm audio jack are both detachable from the left ear cup. Apart from that, most of the functionality for the HyperX Cloud Alpha S comes from the connectivity of the USB audio control mixer.

I can confidently say the HyperX Cloud Alpha S are the most comfortable pair of gaming headphones I have worn.

The headphones weigh 310g and feel super light to wear. I didn’t notice any discomfort from the headband or ear cups even when worn for over six hours.

The headband is covered by a leatherette cushion. It’s not too thick and just enough to get a comfortable mold over your head. The aluminum frame in the headband is adjustable up to 8cm and is very flexible and lightweight, so it doesn’t add any unwanted stress. Even while wearing a toque or baseball hat, the headband never compromised on comfort.

The ear pads are also covered with soft leatherette and packed with memory foam which offers excellent comfort. They are very breathable and never get too humid through long gaming sessions. The HyperX Cloud Alpha S also comes packaged with a second pair of fabric ear cushions. In my opinion, the leatherette offers a lot better comfort, while the fabric has better airflow.

The only plastic I can notice are the ear cups and hinges at the base of the headband, but it doesn’t take away from the build quality. The headset feels like it is made of good quality material, and no part on it really feels cheap. Even the detachable mic and 3.5mm audio jack can easily be removed and snapped back into place without the worry of breaking them.

I did notice that the 3.5mm audio cable and USB audio control mixer will start to curl and tangle up over time. This is the same issue I ran into with the Razor Kraken 7.1 V2. Other than this, the build quality is showing it is a high standard, and ready to be put through hours of gaming.

The HyperX Cloud Alpha S impress me in all areas, except mic quality

I was prepared to say the HyperX Cloud Alpha S hit all the marks, but I was let down by the microphone quality. While gaming with friends the main comment I received was that my mic was really quiet.

That was until I downloaded the HyperX Cloud Alpha S Ngenutiy drivers for pc. The drivers have audio adjustments options, including the microphone level. The default volume was set at half, so I adjusted it to max. The difference wasn’t anything dramatic but at least I was a bit more noticeable within game chat.

I wanted to hear how the mic quality picked up my voice, and did two recordings that showed I had to talk rather loudly for my voice to come through clearly. In both recordings, the mic is positioned an inch from my mouth.

I suspect the reason the mic was still quiet was because of the foam windscreen. It’s meant to prevent the mic from picking up ambient noise such as wind from coming through but it forces me to talk loudly in order to be heard. Even so, it would sometimes pick up my breath and other ambient sounds, so I gave up and decided that I was fighting a losing battle with the mic.

This is a rare occurrence, a pair of headphones that works with all platforms. I know it sounds too good to be true, but it is!

The HyperX Cloud Alpha S can connect to the PS4, Xbox One, and Mobile devices using the detachable 1m audio cable. The audio cable can be connected to the 2m audio control mixer and this works on the PS5, Xbox Series X, and PC.

The 1m audio cable made it convenient to transition to console gaming by connecting directly to the controller. It allowed me the freedom of not being connected to the console so I could seat myself wherever I like.

This was a connectivity feature I have never come across and found it to come in handy in clutch moments. We’ve all been there, you’re in the final seconds of a round, the last one standing, and all of your teammates are backseat gaming. It’s the worst, but all I had to do was turn down the chat volume on the mixer, and turn up the in-game volume and I am ready to win the round.

The HyperX Cloud Alpha S 50mm dynamic drivers have neodymium magnets. As mentioned above, the headphones are also equipped with 7.1 surround sound and have bass adjustment sliders on the back of each ear cup. This all offers a lot of control over how you want your sound delivered.

Right off the bat I was impressed with the sound quality of the HyperX Cloud Alpha S. Even the tiniest details were audibly clear

I was not disappointed when first testing out the sound quality on Halo: Infinite. The 7.1 surround sound was very impressive and gave a clear direction of footsteps and gunshots. Even micro details such as bullets dropping, reloading, or the sound of removing a pin while throwing a grenade stood out.

The lows of the bass never seemed to mask the highs and mids of other sounds. I simply lowered the bass adjustment sliders if the low end was too prominent in a song or game and the mids and highs instantly stood out. This came in especially handy when I was really invested in the audio, and I would adjust the bass sliders to a minimum, making footsteps and gunshots substantially more apparent.

For the first go on PS4, I went back and played Call of Duty Modern Warfare. It doesn’t matter if I used the 3.5mm audio jack or USB connector to hook up the headset, the audio was delivered the same. The 7.1 surround sound was pinpoint accurate with the mids of footsteps and highs of gunshots. The ear cups isolate well, making outside sounds barely hearable.

Not many headphones do well with balancing audio from multiple applications, however, the HyperX Cloud Alpha S do.

Although the Corsair HS70 Pro Wireless left me with a solid impression, I would say the HyperX Cloud Alpha S are a step up.

The build quality of the Corsair HS70 Pro Wireless is equal to the HyperX Cloud Alpha S. All the materials on both headsets are durable and neither gave the impression that they were cheaply built. However, one pair was superior in comfort.

The comfort and sound quality of the Corsair HS70 Pro Wireless are good, but the HyperX Cloud Alpha S are just better

I get why professionals are using the HyperX Cloud Alpha S. They feature the best sound quality I have come across in budget gaming headphones and they live up to all my expectations.

The connectivity and functionality of the USB audio control mixer are great and it gives complete freedom to adjust in-game audio, chat audio, and even the 7.1 surround sound. The downside is that the mic quality is nothing special. It’s certainly a little too quiet, and is not the best at blocking out ambient noise.

Their outstanding comfort and professional-grade sound quality are what sets the HyperX Cloud Alpha S apart from the pack. HyperX has set a new standard for budget gaming headphones.