Despite some tuning flaws, the 7Hz Timeless are great planar magnetic IEMs.

Thank you to Linsoul for providing the 7Hz Timeless for review purposes.

My first encounter with the 7Hz brand was through their i99 IEMs which had a very unique shell design that immediately caught my attention. Unfortunately, the sound quality of the i99 did not match their design prowess.

Fast forward two years and 7Hz has not had a single ‘breakout hit’, so to speak. Then, along comes the Timeless, a pair of mid-range, planar magnetic IEMs. Given the lukewarm reception that previous 7Hz IEMs have received, one may be misled into thinking that the Timeless are another uninspired option. 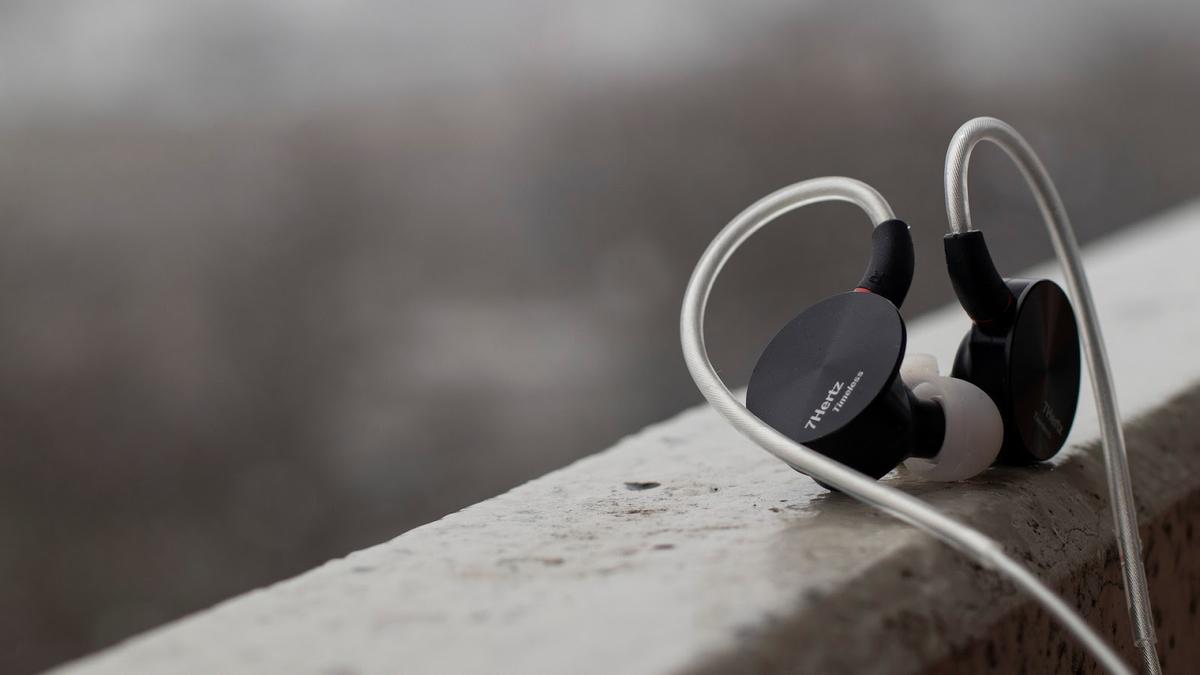 7Hz picked a bold name for the Timeless and frankly, got very close to justifying their word choice. Most importantly, the Timeless are good to go in stock form, so you don’t have to worry about source-matching and such. I can recommend the 7Hz Timeless to those who do not mind a dash of brightness up top, want a taste of planar in IEM form, and want one of the most resolving pair of earphones in the $150 - $300 price range.

Fortunately, the Timeless are anything but uninspiring.

In fact, the Timeless stand out as one of the most interesting IEM releases of the entire year. Read on.

7Hz Timeless come in a compact but heavy box. The unusual weight is due to the impractical but great looking carrying case which is milled out of a solid aluminium block.

The supplied cable feels supple in hand and does not form kinks or bends. I am not too fond of the red and black aesthetics though. In terms of materials, it is a silver-plated and pure copper strand mixed cable and negates the need for an aftermarket replacement. Mine came with a 4.4mm pentaconn balanced connector.

The Timeless have a two-piece shell design. The seam where the two pieces join can be felt with fingernails and is uneven in places. The outer shell has a coin-like shape that gives a distinct look to the IEMs. The inner-shell meanwhile, has a more traditional IEM shape.

Due to the large driver size and dual magnet arrays, the Timeless are thicker than average single-driver IEMs.

There are five vents on the inner faceplate: four near the channel markings and one beside the nozzle. Speaking of the nozzle, the 5mm diameter is larger than average and the mesh can be replaced if it gets clogged.

The 7Hz Timeless are quite comfortable and have a snug fit. I can listen to them for hours without any discomfort or pressure buildup. Isolation, unfortunately, is below average.

Planar IEMs are a rare breed and the Timeless are one of the few IEMs that utilizes a full-range planar driver. The 14.2mm double-sided magnet driver coupled with the ultra-thin diaphragm is similar to full-size planar headphones. However, the Timeless are surprisingly light even though they use dual magnetic arrays.

The driver cavity has an interesting design as well. It’s shaped into a half-circle and a tuning mesh behind seemingly acts as a dampener.

The Timeless use an acoustic chamber and clever damping schemes to achieve their intended response.

The general sound signature of the 7Hz Timeless can be described as “bass boosted neutral”. That’s an oversimplification of course, so let’s dive deeper.

The 7Hz Timeless’ bass response is one of the best in their price class.

Despite an early rise in bass shelf (starting around 50Hz) the Timeless sound clean with no discernible bass-bleed. This rise also adds some thickness to the low-end with snare hits having a dense leading edge.

Bass here is fast with good texture. The slam isn’t as noticeable as the best planar headphones though. Also, the sub-bass rumble is rather polite and lacks physicality in stock tuning. Percussion hits lack tactility as a result.

Fortunately, the 7Hz Timeless can take EQ like a champ. If you want some extra grunt and physicality in the bass, try adding a +4dB sub-bass shelf from 150Hz downward. This noticeably improved the slam factor and did not drown out the mids either due to fast transients and the low distortion driver.

Whereas the bass tuning is mostly good, the midrange is a bit of a mixed bag. First the good stuff. Male vocals sound superb. Baritone vocals have adequate heft and don’t sound hyper-clear as on some Harman curve (or its derivatives) hitters. This tuning works really well with rock and hard-rock tracks, e.g. Seether’s Sympathetic.

However, in certain tracks with high-pitched vocals the Timeless can sound grating. It is not a big issue for the most part but occasionally pops up depending on track or source. As a result, female vocals don’t sound as smooth or effortless as male vocals.

Perhaps the most contentious part of the Timeless’ tuning is their treble response. The lower treble is quite uneven and, to my ears, has some ringing around 5Khz. I tried to check it via a decay plot but that was inconclusive.

Nonetheless, this ringing adds some odd sharpness to acoustic guitars in some tracks. As a result, the timbre sounds off, with string instruments having a metallic sheen to their tone. For this reason, pairing the Timeless with a warm source may provide better results.

I decided to check the burst decay graph, centered between 4KHz to 8KHz, to see if I could see what I’m hearing. The 5KHz and surrounding frequencies do not decay right away but it does not look too bad, so the results are inconclusive.

This lower treble issue is exacerbated by some emphasis near 8KHz that makes the leading edge of cymbal hits too prominent.

The best thing about the treble is its extension. Crash cymbals, hi-hats, and triangles decay naturally. The shimmer of upper-treble notes can be heard even though they are not particularly prominent (and that is a good thing here).

On a similar note, the 7Hz Timeless have excellent resolution across the spectrum. They outresolve most of their competition in terms of raw detail retrieval.

Staging and imaging are two aspects where the Timeless don’t stand out. The staging here is fairly narrow and lacks depth, even though stage height is quite good. Imaging, meanwhile, lacks the pin-point precision to localize instruments in ordinal directions.

Macrodynamics (sudden change in loudness) are portrayed well, even though with more sub-bass grunt it would be better. Microdynamics are rather poor. Subtle changes in volume are not picked up well, and everything plays at the same volume.

Speed, on the other hand, is as good as it gets in this range. The Timeless’s planar driver strikes a good balance between the fleeting nature of BA drivers and the slower, denser, dynamic drivers. Transients are softer than full-size planar drivers but retain the sense of speed across the frequency range.

Dunu’s Falcon Pro are single-dynamic driver IEMs that are priced near the 7Hz Timeless. Dunu makes use of the ECLIPSE driver system to get better driver excursion and control.

In terms of build quality and accessories, I have to give the nod to the Falcon Pro. Dunu just knocked it out of the park with the Falcon Pro’s stainless steel housings and shell design. The cable is softer and more pliable on the Timeless, but the Falcon Pro has a modular plug system. Comfort is similar on both, and so is isolation.

Let’s get into the sound. The tuning is rather different between these IEMs with the Falcon Pro going for a bass boosted, V-shaped tuning.

The Falcon Pro are warmer and thicker in tone than the Timeless. As a result, the Falcon Pro are less resolving and cannot render fine details as well as the 7Hz IEMs. Bass is also noticeably slower and has some bleed in the upper-bass region.

These two IEMs have little in common and are intended for different audiences. For a smoother, laid-back, and more dynamic listen, the Falcon Pro are great. For a more technically accomplished sound, the 7Hz Timeless are the better pick.

It is not a planar magnetic IEM review if we do not compare them against the classic Audeze iSine series. These IEMs are often out of stock but can occasionally be found second hand or as B-stock, so a comparison is warranted.

The iSine 10 is Audeze’s cheapest planar IEM and has a larger footprint than the Timeless. They also do not fit like usual IEMs and go for shallow inserts. Moreover, these are true open-back IEMs so there is zero isolation. Audeze also uses the nozzle itself to tune the frequency response, whereas an optional “Cipher cable” adds further DSP effects to even out the response.

Without the Cipher cable the iSine 10 sound horrible. They are an uncontrolled, peaky mess from analog sources and are practically unlistenable. The story changes drastically with the Cipher cable.

With the Cipher cable, the sound is V-shaped without going overboard. The Timeless meanwhile strikes a better tonal balance. Bass lacks texture on the iSine 10 compared to the Timeless, whereas lower-midrange is tuned better on the 7Hz IEMs. Female vocals and treble, however, are smoother on the iSine 10.

In terms of raw resolution these are quite close to each other but the Timeless just edges out their competition. When it comes to staging and imaging though, the iSine 10 reigns supreme. They are on a different class altogether and comparable to open-back, full-size headphones when it comes to staging prowess.

As for the non-sound criterias, the iSine 10 is impractical for outdoor use due to no isolation. They are also very heavy and I find them uncomfortable. Moreover, the Cipher cable necessitates having an iPhone or an older iPad with a lightning connector. Considering availability, practically, and the much superior stock tuning – the 7Hz Timeless is an easy winner in this comparison.

7Hz picked a bold name for the Timeless and frankly, got very close to justifying their word choice. The Timeless do not require an absurdly powerful source or heavy equalization to sound good, and that alone is a great accomplishment when considering its peers.

The 7Hz Timeless are not perfect. The treble tuning could definitely use some work, the sub-bass could do with more physicality, and the upper-mids and lower-treble need adjustment. Imaging and microdynamics are two other weak points.

That being said, the bass response is very good overall and the lower midrange is delightful. General resolution is top-notch and gives certain more expensive IEMs a run for their money. Most importantly, the Timeless are good to go in stock form, so you don’t have to worry about source-matching and such.

I can recommend the 7Hz Timeless to those who do not mind a dash of brightness up top, want a taste of planar in IEM form, and want one of the most resolving pair of earphones in the $150 – $300 price range.