A surprisingly affordable introduction to the preferences of a master tuner.

Thank you to KZ for providing the CRN for review purposes.

Headphone review golden-boy Crinacle (Corin Ako) is at it again. Famous in headphone circles for his comprehensive comparative IEM frequency graph database at In-Ear Fidelity, he’s recently made a very successful dive into the more lucrative waters of YouTube (new channel). His hard work has been recognized by more than just enthusiasts, as more and more IEM companies are tapping him to help tune new IEM revisions or models.

I previously reviewed the excellent Blessing 2 – Dusk, so it’s with some excitement that I’ve got his next 3 collaborations in my review queue. Especially interesting is this first low-cost option coming from the ever-prolific company Knowledge Zenith (KZ). 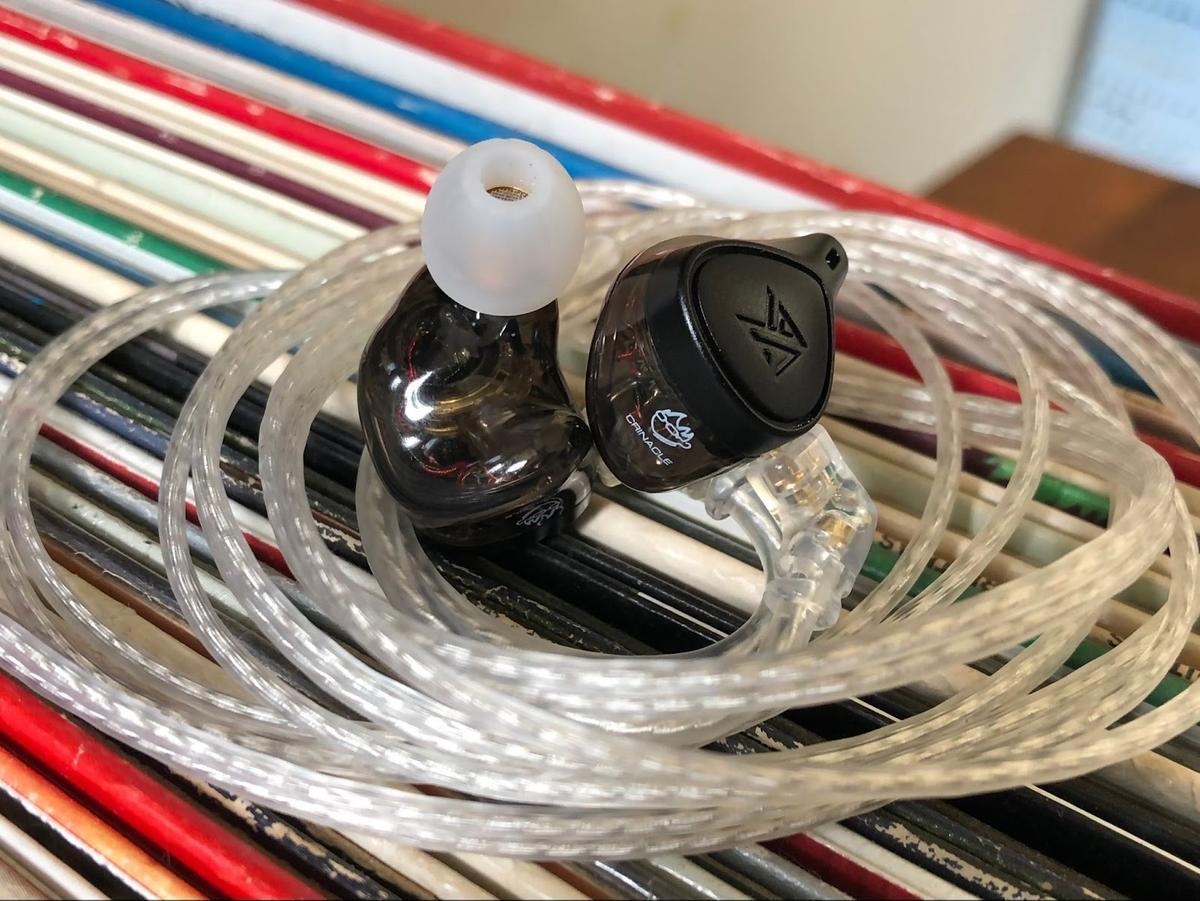 The CRN are a definite departure for KZ and incorporate a lot of firsts. First KZ tribrid. First sub-$50 tribrid. First KZ collaboration. First sub-$100 Crinacle collaboration. This is a more mainstream KZ offering, with a tamer and balanced tuning. They are an impressive set of IEMs for the price, even if they are not exactly genre-redefining. Inoffensive and reasonably refined, the CRN can certainly serve as the low-cost starting point to the Crinacle signature sound.

The KZ CRN is (by far) the least expensive of all his collaborations, priced sub-USD$40, and it will be interesting to see if Crinacle can leverage his tuning style to evolve and elevate KZ’s deep v-shaped house sound.

“Now the final price barrier has been blown wide open: sub-$50. A product built in collaboration with one of the most famous budget IEM manufacturers proving that you don’t need to pay for tuning. One of the very rare few IEMs in its price bracket wherein one could truly describe as “balanced”.” – Crinacle
I’ve been impressed by the bang-for-the-buck value of some of the lower-priced KZ models in the past. But it seems when KZ tries to get too fancy, such as with the 20-driver ASX model, things start to get more expensive, and veer off the rails.

Interestingly, KZ began marketing the Crinacle CRN model as the ZEX Pro as a test to see how a differently tuned pair of KZ IEMs would be received, and without the celebrity connection. Once the initial reactions began pouring in, the Crinacle involvement was revealed.

I wonder if the sequel will be called the CLE? (Crinacle = CRN + CLE)

The CRN also has the honor of being the least expensive tribrid on the market, combining a dynamic driver (DD) with a balanced armature (BA), and a magnetostatic (sometimes referred to as an electrostatic) driver for high frequencies. How they can do all this for the bargain-basement price tag is beyond my budgeting abilities.

There have been questions raised as to if the BA and magnetostatic drivers have any meaningful impact on the sound, or are included more for marketing purposes. The observations in this article refer to the CRN sound, regardless of driver content.

I tend to like Crinacle’s take on tuning. I’ve been really impressed by the sound of the tribrid IEMs I’ve encountered. I’ve enjoyed some budget KZ IEMs in the past. Will the stars align and make the CRNs a low-cost favorite? We shall see…

KZ Acoustics was founded in 2008 by classical musician Zen Li and former Audio-Technica engineer Keith Yue. It is a public brand for the Shenzhen Yuanze Electronics Company located in Guangdong, China. In 2010 KZ started selling products on the Chinese shopping website Taobao, and in 2013 the KZ brand started being widely promoted.

KZ generated a huge amount of industry buzz by creating products that redefined the ratio of price to performance. Initially, there was seemingly unending hype over KZ (as of writing: approximately 3800 pages in a single Head-Fi post). The caveat? Most discussions conclude with the idea that although their IEMs may not produce the absolute best sound, they are difficult to beat at their low price point.

KZ is known for releasing many different models, so it gets convoluted when trying to figure out their hierarchy of IEMs. Multiple IEM models are included under each line: AS, AT, BA, BT, ED, ES, HD, YZ, ZA, and ZS. Please refer to my other KZ reviews for specifics.

The packaging is pure KZ. They’ve got a format and haven’t deviated from it. I haven’t reviewed a pair of KZ IEMs for over a year, but the CRN packaging is exactly what I expected from my previous experiences. A small cardboard sleeve with product pictures over a clear plastic topped box with the IEM faceplates visible inside. The cable, ear tips, and documentation are under the foam at the bottom of the box.

Do you get a whole bunch of extras at this price point, like foam ear tips or a hard-shell travel case? Nope. And I don’t expect to. I’d way rather they spend the scant money on R&D and construction.

The cable is billed as ‘new and improved’ and while it is perfectly fine, it is unlikely to set any enthusiast’s hearts aflutter. From y-split to 90-degree 3.5mm plug, the cable is comprised of a thin pair of silver-plated copper wires sheathed in clear plastic outers. At the y-split, the cables separate to the angled 0.75mm 2-pin (type-c) connectors.

To be fair, the difference between included cables with $40 IEMs and $400 IEMs continues to get even slimmer.

The final 3 inches of cable on the 2-pin side are coated in stiff rubber to curve tightly around the ear. It’s a bit stiffer than necessary, but doesn’t impact comfort too much.

The ZEX Pro and CRN differ only by the Crinacle logo and name printed on the flat top side on the latter. Both are constructed of clear acrylic with zinc faceplates, subtly embossed with the KZ logo. The rose-gold (pink) version has crystal clear resin, while the black version uses translucent black.

The CRN are fairly bulky, but ergonomically shaped with prominent brass-colored nozzles. The lip of the nozzle is ridged to aid in ear tip retainment. Like previous KZ models, construction is essentially flawless regardless of their price, and there is little to criticise.

Those with smaller ears may struggle to find a comfortable fit due to the size of the CRN body, but the smooth shape fit in my mid-sized ears quite well. I’m getting used to the bigger footprint of multi-driver IEMs and the CRN are par for the course.

You won’t forget that they are there, but overall comfort is quite decent.

The CRN are marketed as true tribrid IEMs. That is, they contain a 6.8mm low voltage magnetostatic unit, a 10mm double magnetic dynamic driver, and a 30095 balanced armature driver per side. All directed by a fixed crossover board to split the frequencies to the appropriate driver. It’s a first for KZ, and a first at this price point.

“KZ ZEX Pro uses the 6.8mm electret unit. The electrostatic field formed by the change [sic] of the two electrode plates, the extremely thin diaphragm produces sound under the uniform drive of electrostatic force. Compared with other sounding units of the same specification, the low-voltage electrostatic unit has superior performance and more stable quality consistency.” – KZ

Both the 30095 BA and dynamic drivers have been reused from other KZ models, but the electrostatic driver is new. This should be your first indication that the CRN are intended to be unlike previous KZ models. New driver = new sound?

“With how low the retail price is, the CRN is an exercise in specialisation. That is to say, a pure 100% focus in tuning above all else, and an attempt to being the price bracket leader in that regard. As I’ve mentioned in the past: you don’t have to pay for tuning. And I guess now it’s time for me to prove it.” – Crinacle

Do the CRN really sound different than the KZ house sound? Yes. Yes, they do.

The CRN are on the bright side of neutral, with elevated sub-bass but fairly restrained mid-bass. They have a different sort of v-shaped tuning than is the KZ standard, but the midrange is still pretty lean. It’s like the very ends of the spectrum are raised, with a sub-bass boost and upper-end treble sparkle.

For the price, the CRN are surprisingly clear and clean, with good detail presentation. They aren’t the most resolving IEMs I’ve listened to, but they do manage to avoid the all-to-common upper-midrange/lower-treble harshness that I dislike in IEMs.

The focus on sub-bass over mid-bass means that some energy is lost in the low-end. These are politer KZ IEMs than I’m used to. Not a bad thing, per se, but past KZ fans may be surprised by what they hear. Rather than peaking heavily in the mid-bass and mid-treble regions, the CRN push these summits out further, which changes the listening experience quite profoundly.

The CRN are likely more palatable for a wider mainstream audience than previous KZ models. Tuned neither for bass nor treble-heads, Crinacle has managed to tame the KZ sound into a mellow generalist-sort of tuning. While nothing jumps out as outstanding, for the low price, the CRN earn a solid ‘good’ rating in all audible categories.

Crinacle is known for his sub-bass over mid-bass preferences and the CRN fall in line. Toning down the upper bass frequencies keeps the midrange clean with no spillover or bleed, but it can sound a bit laid back. On the positive side, the low end is fast and tight, but a little soft in the overall mix. I could do with a touch more mid-bass punch to keep things exciting and engaging.

KZ tends to make v-shaped, i.e. midrange-recessed, IEMs. The CRN follow this pattern, and due to the tame upper-low-end, their midrange tends to sound somewhat thin. Clarity is good and voices sound clean and uncolored although they lack much weight and substance.

The CRN peak around 8kHz and fall off quite quickly after that, which does add a bright tonality to their sound, but depending on source and recording, can tend to sound a touch hot for my tastes. The overall treble impression is of good detail, with decent upper-end airiness. These aren’t giant killers, but the CRN are more than respectable compared to others in their price league.

“One could say that the CRN is the taster for a more balanced tuning that is common in more expensive sets but rare to come by in budget IEMs. By all means, use it as a litmus test to see if you’re one who’d enjoy such a signature. If you don’t, you’ve successfully narrowed down your criteria anyways.”– Crinacle

Crinacle seems to say that the CRN are a gateway to his tuning, rather than a destination in of themselves. If you enjoy what you hear, you will find better models featuring his signature sound out there. In fact, he even links the Dusk as the conclusion to the journey started with the CRN.

So, endgame, they are not. And seemingly, they aren’t intended to be. Which is an interesting way to approach developing a product. You can buy the CRN to get a feeling for Crinacle’s tuning tastes and to see if one of his more expensive collaborations may be to your liking.

Or, of course, you may be someone who only rocks sub-$50 pairs of IEMs, and for you, the CRN bring a lot to the table.

Putting your name on something builds expectations, and those who expect the CRN to rival the Dusk are likely to be disappointed. However, if you can shelve your expectations and evaluate the CRN as if they were still just known as the ZEX Pro, you may be pleasantly surprised.

This is a more mainstream KZ offering, with a tamer and balanced tuning. They are an impressive set of IEMs for the price, even if they are not exactly genre-redefining. Inoffensive and reasonably refined, the CRN can certainly serve as the low-cost starting point to the Crinacle signature sound.