The TA-26 OTL amp is a mythological creature defying expectations, but maybe not the way you think.

Thank you to Xduoo for sending the TA-26 for review.

There’s long been a truism in headphone audio – that OTL amps (that is, Output Transformer-less tube amplifiers) are the perfect companion to high impedance headphones. They’re simple, configurable to your own sonic needs via tube rolling, and offer the high voltage output you need to drive high impedance cans well.

So the story also goes, OTL amps have a lush, organic tube sound that is bigger than life.

An OTL is a mythical beast possessing all the qualities desired by any audiophile, save for the most devoted believers in neutrality, right? The latest offering from the folks at Xduoo is the OTL TA-26, and I gave it a good long listen. 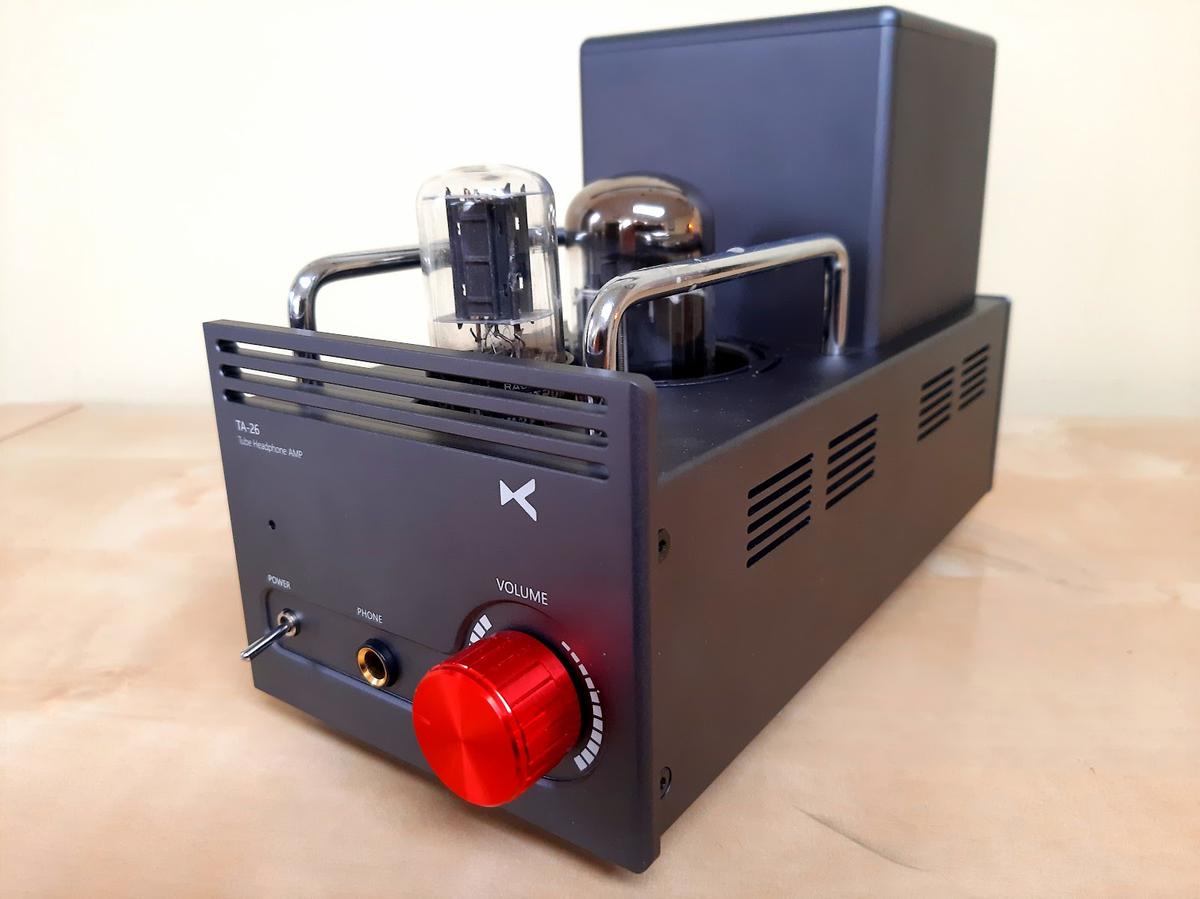 There is no doubt it is built well and indeed does many of the things tube amps are known for. It has the capacity to change tubes to customize the sound. It has the push required to run high impedance cans at their best. And it has the rosy glow of thermionic goodness right there on your desktop. Unquestionably all good things. What it IS is a solid and affordable amp that is well built and prepared to take on your high impedance cans in style, especially in a dark room.

Being my first tube headphone amplifier experience, I learned a few things about truisms and perhaps got a peek into the nature of audiophile mythologies. Read on…

The amp itself is sent in a tidily arranged cardboard box. It is very clear that the packaging is a ‘just the facts ma’am’ proposition for international shipping ease. That said, the amp and tubes are organized nicely in their own boxes inside the shipping carton, safely snugged into place, and appreciably packaged in friendly, familiar, and recyclable brown cardboard.

There are no additional accessories provided, although, I’m not certain that any are necessary!

OTL amps have never really been known as objects of particularly sexy design – at least in a traditional consumer electronics sort of way. You won’t usually find them with touchscreens, matrices full of functions and filters, nor even particularly innovative industrial design. I have seen a few that were nicer than others, largely due to fantastic DIY work, or keen design sense doing what it can to guss up a necessarily cartesian object.

Facing realities, OTL amplifiers are generally utilitarian creations made up of several tubes and a power supply transformer. Not much to work with.

The TA-26 isn’t very different. The design language is terse and elegant. Clad in anodized gray and red, much like the rest of Xduoo’s latest offerings. It calls on the look of Neve studio gear, which I certainly appreciate.The materials all feel durable, sensible, and understated – steel and aluminum. Again, just the facts.

Given that the majority of it’s 4 kilogram weight is a power transformer, its feel is substantial, and there’s little doubt that it’s well made.

The insides of the TA-26 are an exercise in simplicity. Once you remove the tubes, there is very little to see besides a very small, elegant circuit. The tube sockets are ceramic with gold plated contacts, the circuit boards themselves appear to be very high quality, and the main bank of capacitors appear to be Sprague Orange Drops.

All of the RCA inputs (and outputs), as well as the ¼” headphone jack are gold plated. The provided 6N8P (6SN7) preamp tube, and 6N5P (6AS7) power tubes are perfectly functioning, though unlabeled, and I think they are either of Chinese or Russian lineage.

The amp also allows for using it as an inline tube buffer via it’s output jacks.

The stated output of the amplifier is 500mW at 300 or 600 ohms. I’m not certain how accurate it is that an amplifier can provide the same output into either load, but I find little issue in getting either load to an acceptable volume.

Beyond those levels, the amplifier can be driven well into audible distortion if you aren’t careful about your input volume. If the DAC output is dialed back a bit the amp seems to do this much less. This may indicate that the input buffer is set a little too hot, as I’ve never experienced this with any of my other amplifiers. This is something people without DAC volume controls should consider when pairing with the TA-26.

The near mythological sound qualities of tubes have been argued for forever in audio circles – some believing they are second only to live musicians in making music, and some decrying them as hopeless distortion generators. Like anything in a hobby full of very opinionated folks, there’s always going to be disagreements.

Funny enough, my experience with the TA-26 isn’t one that would polarize me one way or another.

As with any amplifier, what you pair it with matters, whether on the input or output side, and this was certainly the case with the xDuoo. In my case, I used an ifi IDSD micro, and a MOTU M4 interface: two DACs of very different characters. The iFi, loosely characterized, is a softer warmer sound with a Burr Brown chip, while the MOTU is a much more exact sounding unit with an ESS Sabre chip.

Through the TA-26, the differences were as obvious as you’d expect. So in this regard, the little Xduoo seemed fairly similar to many other amps in that it gave what it got from upstream. I expected there may be added color, but my initial notes were more along the lines that it is fairly neutral to its source without that much coloration at all.

Another common comment in regard to OTLs is that they are VERY finicky about the impedance of your headphones, and are to be used only with those presenting 250 ohm or higher units. That in mind, I used the Beyerdynamic DT 880 600 ohm, the Beyerdynamic DT150 250 ohm, and the Drop HD6xx 300 ohm cans for the majority of my listening.

All seemed as advertised on the tin until, just out of curiosity, I thought I’d plug in my Audeze LCD-2C, which are 70 ohm headphones. Strangely, there was little issue with sound quality going off the rails. In fact, I really enjoyed the combination. I also tried 80 ohm DT 770 Pro and DT 250 with similar results!

So far, most of the mythologies of OTL tube headphone amps were proving somewhat overexaggerated, or Xduoo has created something that defies some of the common thinking about them. Very little about this amp proved to be overtly fussy in any way.

Hmm. Either the myths are wrong, or the TA-26 is a bird of a slightly different color.

As far as sound quality goes, I had the opportunity to run the amp through its courses with almost all of my headphones. Generally speaking, the bromides of ‘warm and euphonic’ are what I was expecting: soft bass, rolled off top end and a full forward midrange.

Instead, regardless of what 6sn7 or 6as7 tubes I ran in it or what cans were in the output jack, I was greeted with an altered perspective to common tube amp assumptions.

The bass on the TA26 is fantastic. Good texture, sufficient slam, and fantastic dynamics with anything I threw at it. To be honest, the only time it ever went into ‘marginal’ territory was with the Audeze LCD-2Cs, but that was somewhat expected given the low impedance. Even then, it was hardly unacceptable, just a slightly softer presentation.

Even with a bit of a midrange recess, the amp never loses it’s listenability and certainly never loses its textural abilities. In my experience with tube amps, midrange is often front and center, and the star of the show.

While I felt the TA-26 did a decent job with the all-important midband, it just DIDN’T call attention to itself, and that in and of itself was yet another place that ‘the lore of the tube’ was not manifesting itself in the TA-26. Neither remarkable, nor disappointing.

Under most normal listening circumstances, the top end of the Xduoo TA-26 is composed and polite. I can’t claim that it ever seemed rolled off obtrusively, it really stays fairly similar in many ways to my high-powered solid state amplifiers. Absolutely pleasant where it should be, and certainly capable of brashness where a recording dictates it should.

But where it has issues is when it is pushed beyond its limits volume wise. As the amp runs out of headroom, unsurprisingly, it distorts.

Close to the threshold of it distorting – this phenomenon will bring the spatial cues out of the music, and make everything seem super vibrant and alive. One step beyond the line, however, and it does step squarely into very audible and pretty unpleasant distortion. This is also easily controllable, as noted earlier, by controlling preamplifier gain.

I will say that one myth that was absolutely NOT exploded is that the Sennheiser HD650s/6xxes really DO sound phenomenal with this amplifier! I have never heard the bottom octave of those headphones sound quite as good, and you could easily purchase this amp for the exclusive purpose of running the 600 series next to a comfortable chair. I believe that it is unquestionably the fate of those two in my household.

Boiling it right down, the Xduoo TA-26 is a solid performer as an amplifier, regardless of type. It lost no traction compared to my high-powered, solid state powerhouses, and is largely their tonal equal. It has its own particular mildly softened voice, but well within the realm of reason.

There is no doubt it is built well and indeed does many of the things tube amps are known for. It has the capacity to change tubes to customize the sound. It has the push required to run high impedance cans at their best. And it has the rosy glow of thermionic goodness right there on your desktop. Unquestionably all good things.

But the realities of the TA-26 may not meet the oft times overblown myths of what a tube amp is.

It isn’t wildly euphonic, or even really very euphonic at all. It isn’t excessively softening or subtractive of detail. It certainly isn’t squishy in the bottom octaves. It likely isn’t ‘endgame’, but at the TA-26’s price, it has absolutely no pretenses at being that. And it most certainly isn’t, used within reason, something you’d recognize as a ‘distortion generator’.

What it IS is a solid and affordable amp that is well built and prepared to take on your high impedance cans in style, especially in a dark room.