The Titan S truly live up to their namesake: they are a giant of the budget segment and set the gold-standard for a pair neutrally-tuned, affordable IEMs.

Thank you to DUNU for providing the DUNU Titan S review unit.

Titans, in classic Greek mythology, are a family of giants born of Uranus and Gaea, and they ruled the earth until the Olympian gods overthrew them. The Merriam-Webster dictionary also defines a Titan as “one that is gigantic in size or power; one that stands out for greatness of achievement”.

In the ultra-competitive single dynamic driver IEM market, there are a multitude of well-regarded budget gems, such as the Moondrop Aria 2021, TForce Yuan Li, and Tin HIFI Tin T3 Plus. In fact, every week brings about a new hype-train release in this segment. 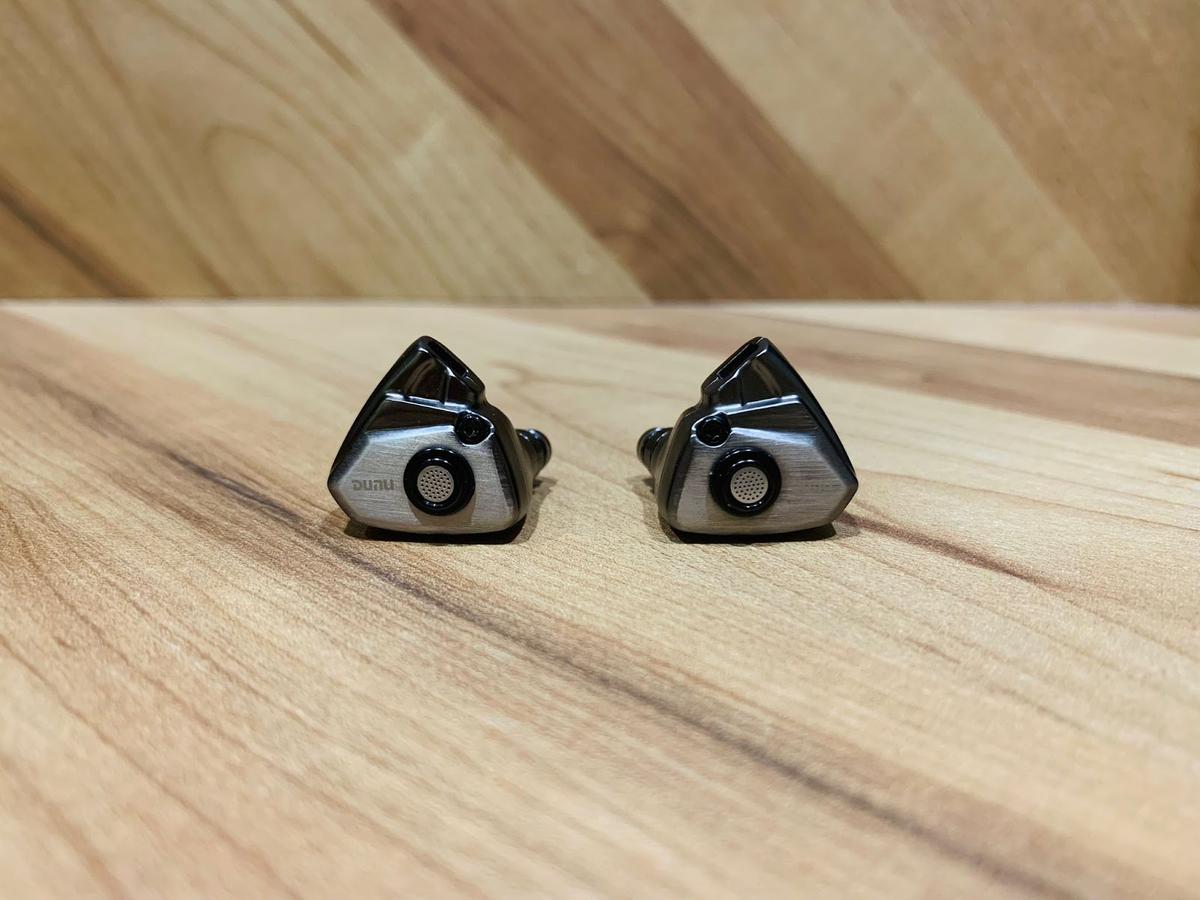 They meld solid tonality, timbre, and technicalities into a nice package, with few tuning flaws. Generous accessories and easy to drive are the icing on top of this steampunk cake. Some small nitpicks are the sub-bass roll-off and a mediocre cable. The Titan S are a benchmark pair of neutral IEMs at the sub USD$100 region and they really are a Titan amongst the other CHI-FI fare.

This segues to the million dollar question: where does the Titan S stand in this ocean of single DD choices?

Spoiler: the Titan S are a Titan in the budget segment and aren’t a sinking Titanic ship!

DUNU has obtained internationally-recognized acoustic research achievements and patents. For example, DUNU were one of the pioneers in developing a full beryllium dome single DD IEM in the LUNA, which are still regarded as one of the top-of-the-line single DD sets that can match multi BA/hybrid IEMs in resolution (most other purported beryllium DD IEMs are plated or coated only).

DUNU has also released some crowd favorites such as the DK-2001, Zen Pro, EST 112 and SA6, in addition to having a vast accessory line-up.

The blue-nozzle eartips are the shortest of the lot and have the narrowest bore diameter. These tips give the shallowest fit, and increase soundstage, though they provide the least isolation.

The white eartips are the tallest and they do give a deeper fit and consequently more isolation, though with a slightly more intimate soundstage.

The red-nozzle eartips are kind of a mid-point between the above 2 eartips in terms of eartip height and are my preferred eartips for this review.

As we will read on below, the Titan S shells inherently have a long nozzle, and those that find this to be uncomfortable may consider using the blue short eartips to counteract the longer nozzle fit.

The stock cable is made of high-purity, mixed strand monocrystalline copper & silver-plated copper. It comes in a 0.78 mm, 2-pin plug termination, which, in theory, should be more durable than MMCX connectors with frequent cable changing.

This cable is sturdy enough with a chin slider. However, it is very thin, tangles easily, and has microphonics. Using the provided shirt clip can reduce unwanted microphonics to some extent.

Admittedly, the stock cable is not the best DUNU cable I’ve tried, but since the Titan S are a budget set, I guess I can close an eye for this. It is no challenge to find a compatible aftermarket cable if one really finds the cable to be an area of contention.

DUNU’s logo is embossed on the exterior of the leatherette case. This case is huge, and should have no issues fitting in the IEMs with room to spare for other accessories. The inner lining is a velvety material to prevent scratches.

Definitely one of the better included cases I’ve seen so far in my IEM journey.

The Titan S feature lightweight yet durable zinc alloy for the shells. DUNU also advertises that the shells contain an anti-resonance dual-chamber. In terms of build, the shells are legitimately very solid, they would probably survive a drop (don’t try this at home!).

Don’t judge a book by its cover. Or rather, don’t judge IEMs by their shell! Since the Titan S boast a cyberpunk design, one can be forgiven to think that they are a basshead or aggressive V-shaped set. Far from it! The Titan S actually have a unique neutral bright tonality!

Isolation is bang average for the Titan S, not surprising since they are vented like most single DD designs. There appears to be a huge vent in the middle of the shell, but they are there for aesthetics purposes.

The white eartips may increase isolation a tinge, but don’t be expecting non-vented BA IEMs type isolation on this pair.

The left and right earpieces are marked with a L and R lettering respectively.

The shells are light and personally I find them comfortable for my average-sized ears. The shells have no weird edges or protruding parts.

However, the shell nozzles are on the longer side, and I suspect this may be an issue for those with smaller ears.

The Titan S use an 11 mm polycondensate LCP (Liquid Crystal Polymer) diaphragm dynamic driver. Within it are a CCAW voice coil and N52 magnets.

In theory, LCP provides exceptional performance with low distortion in the output signal. It is no surprise that the past year was the year of the LCP hype-train, and some other popular single DD sets such as the Tin HIFI T3 Plus and Moondrop Aria 2021 also use LCP diaphragms.

The Titan S are easy to drive from lower powered sources, but as per most single DD IEMs, amplification improves dynamics, soundstage and micro-details.

The Titan S sport a neutral bright tuning. This is a very unique tuning choice compared to the run-of-the-mill harman and V-shaped sets at the sub USD$100 region. In fact, I think DUNU can carve out their own niche market in view of the neutral tonality on offer.

Timbre on the Titan S is authentic for vocals and acoustic instruments, though note weight is on the thinner side.

In terms of technical performance, imaging, instrument separation, clarity and micro-details are very good for a budget single DD IEM. Soundstage is quite wide (though only about average for soundstage depth and height).

In my opinion, the Titan S trump their main single DD competitors, the Moondrop Aria 2021 and Tin T3 Plus, in the technicalities department.

The neutral signature, good technicalities, and analytical nature of the Titan S make them a very suitable pair of IEMs for critical listening and even studio work. Even so, they are not sterile, due to a slight bass boost.

As mentioned above, bass on the Titan S is just a tinge north of neutral, and this set is mid-bass centric. There is not much sub-bass rumble, so this is not a pair of IEMs for bassheads.

What the Titan S cede in bass quantity, they ace in quality, with the bass being tight, fast, and accurate. Texturing is above average (though perhaps not class-leading) with no mid-bass bleed.

Fast and clean describes the bass of the Titan S.

The lower midrange is neutral, and may sound a bit thin in note weight due to the lack of mid-bass heft.

The upper mids are forward without being shouty, with just a 10 dB pinna gain here. With poorly recorded material, or louder volumes (Fletcher Munson curve), the upper midrange may, on rare occasions, be spicy.

Treble is moderately extended but not overtly fatiguing. Perhaps with longer listening sessions, the boosted upper mids/lower treble may cause some mild glare, but that can be the case with any IEM tuned to be neutral bright. Clarity and micro-details are there without being overly pushed, with cymbals and high hats not overtly splashy. Sibilance is mild and track dependent.

I compared the Titan S with some other budget single DD sets. Hybrids and pure BA IEMs were left out of the comparison as the different transducer types have their own pros and cons.

So how will the battle of the LCP Titans turn out?

The Aria are arguably the main competitor of the Titan S at this price point. They also use an LCP driver and are a huge crowd favorite. In fact, the Aria are one of my recommended balanced sets for those looking for a good budget pair.

First up, the Aria sport anime waifu packaging, and this may be a deal-clincher (or breaker) for some – hahaha.

On a serious note (no pun intended), the Aria have a thicker note weight and more bass quantity, though they have slightly poorer imaging, clarity, and instrument separation than the Titan S. The Aria are less analytical and technical than the Titan S, with less treble extension and sparkle than the DUNUs.

The Aria have a slightly more natural timbre but they do suffer from complaints of the paint bubbling or peeling off the shell, which should not be an issue with the all metal shell of the Titan S.

I view these two LCP giants as complementary sets, and they bring different tunings to the CHIFI budget buffet table.

The Heart Mirror share some similarities with the Titan S, and are another pair of neutral bright IEMs with a thin note weight.

Both sets are quite technical and analytical in tuning, and they are also close in technicalities (in imaging, instrument separation and micro-details), though the Titan S have a better soundstage. The Heart Mirror have better clarity, though this is a function of a boosted treble.

The Heart Mirror used to be my default recommendation for the best budget neutral IEM, but this mantle has been taken by the Titan S as of today.

Essentially, one can view the Titan S as a more refined version of the Heart Mirror.

Vs. Tin HIFI T3 Plus

The T3 Plus have a thicker note weight with more bass quantities, and can sound more “fun”, though the bass quality is disappointing (being one-noted, undefined, and lacking texture).

Imaging, micro-details, soundstage (depth/height), and instrument separation are weaker on the T3 Plus, when stacked against the Titan S.

Among the 3 LCP-containing single DD Titans, I feel the T3 Plus are the weakest of the lot.

The Titan S are now my default recommendation for a neutrally tuned pair of IEMs in the budget segment.

They are pretty unique in terms of their neutral tuning (compared to the hackneyed V-shaped and harman competitors), and meld solid tonality, timbre, and technicalities into a nice package, with few tuning flaws. Generous accessories and easy to drive are the icing on top of this steampunk cake.

Some small nitpicks are the sub-bass roll-off and a mediocre cable. While the nozzles look quite long, I found their comfort to be okay, and the shorter eartips may mitigate the insertion depth too.

The Titan S are a benchmark pair of neutral IEMs at the sub USD$100 region and they really are a Titan amongst the other CHI-FI fare.