Dunu’s mid-range single dynamic IEMs grow on you over time with their inviting warmth and a physical, dense presentation.

Thank you to Dunu for providing the Falcon Pro for review purposes.

Dunu has been at the forefront of the single-dynamic driver IEM resurgence, with their retired flagship Luna being one of the few pairs of pure Beryllium-foil dynamic driver IEMs. Later, the Dunu Zen and Zen Pro kept the legacy alive and even debuted new patented technologies to increase driver performance further. 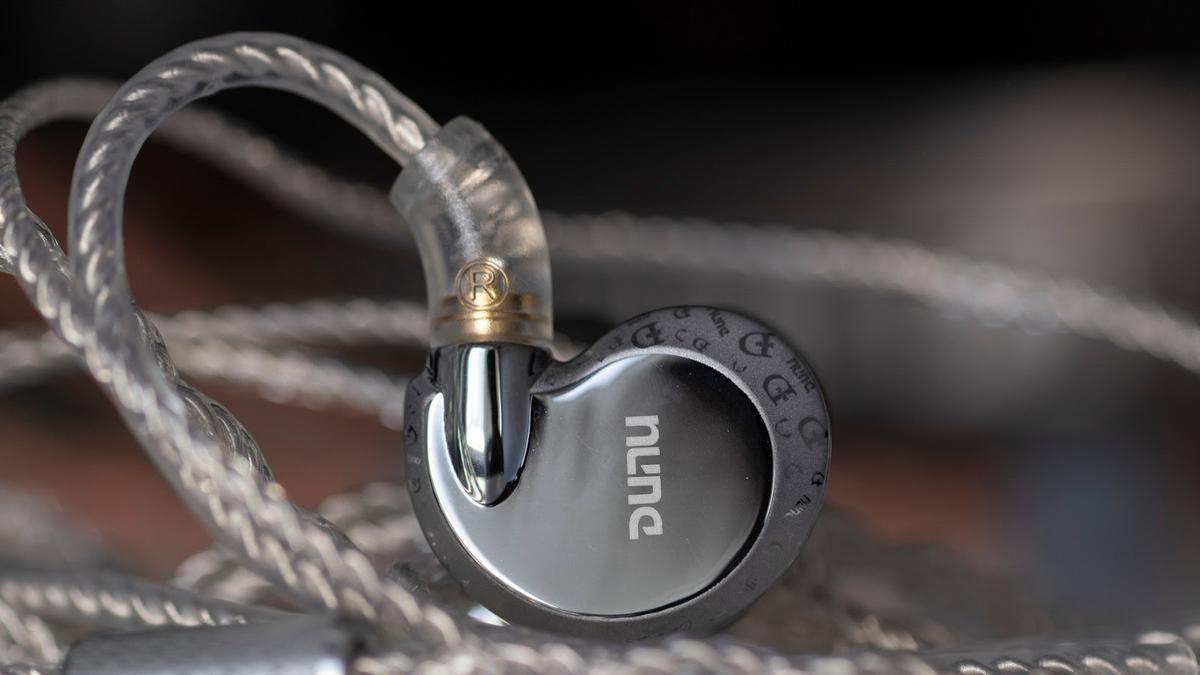 The Falcon Pro received a lukewarm response upon release, partly due to the mid-bass bias and partly due to the apparent lack of clarity and resolution. They do grow on you, though, as it took nearly half a year for me to realize that they are absolutely a keeper pair of IEMs. Dunu’s Falcon Pro stand out amid a myriad of similarly tuned IEMs and walk the fine line between pleasant warmth and excessive bass. They may not be the most resolving and have a recessed lower-midrange, but the overall presentation is addictive enough to overlook those shortcomings.

WIth an upgraded driver and attractive shell design, the Falcon Pro appear to live up to this legacy. Let’s see if the sound quality also lives up to the expectations.

The packaging is relatively small in size (measuring only 15x10x8 cm). Dunu has made the best use of the compact space by packing many accessories within the carrying case itself. Neat idea!

Phew, that is a lot!

The Falcon Pro puts many TOTL IEMs to shame regarding the quality and quantity of stock accessories.

First up is the carrying case. I love the shade of green they use here that subtly shifts in color depending on the surrounding light. It’s roomy enough to carry the IEMs, the filters, and the extra terminations.

Attention to detail carries over even to the zipper with a laser-etched Dunu logo. This case is not small enough for carrying in the pocket, but as a storage case, it is fantastic.

Next comes the cable. I dislike the stiff sheathing but other than that – no complaints.

The cable’s Q-lock LITE modular termination is one of Dunu’s main selling points. The terminations connect to the cable via a 4-pin mechanism. The cable is internally fully balanced, so there is little need to invest in a third-party option.

Dunu also supplies all three popular terminations by default: 2.5mm, 3.5mm, and 4.4mm. I own several sources with different outputs so this makes switching sources a breeze for me.

Last but not least: we get the tuning filters. For storage, they screw into a solid metal card.

The size of the card is kinda overkill, it could’ve been half the length.

Dunu went for a small, over-the-ear shell design that prioritizes comfort and ergonomics. The shell has a polished metal faceplate with a laser-etched, ornamental matte surround.

The laser-etching is especially well done, and forms patterns as light catches it at various angles.

The Falcon Pro utilizes a heavily vented shell design, with five different vents equalizing the front and back pressure of the driver diaphragm. This heavy venting affects isolation but improves the staging and helps achieve a smoother sound.

Each shell has an mmcx connector, and the nozzles can be screwed off for replacement.

Comfort is excellent, as the shells are small, ergonomic, and lightweight. Isolation is poor due to the front vents.

The Falcon Pro are their cheapest IEMs to use Dunu’s ECLIPSE driver system. This system doesn’t necessarily indicate the diaphragm material but rather how the dome, driver surround, and voice-coil attachment process is executed.

As the nozzle itself acts as part of the acoustic structure, it warrants a closer observation. As can be seen from the picture below, the nozzles have differing lengths.

Dunu did a clever trick here: adjust the intensity of high frequencies by increasing the distance between the eardrum and the driver.

High-frequency sound waves have a short wavelength. As such, their intensity drops as the distance increases.

This is why you can hear the subwoofer playing in your neighbor’s house but can barely, if at all, hear the high frequencies. Since we perceive sound as a whole, the reduction of high frequencies makes the IEMs sound bassy, even though the bass quantity remains the same.

The following sound impressions are formed with stock white tips and cable, using a Questyle CMA-400i and Sony NW-A55 as the source. Test tracks are available on Tidal as a playlist.

In terms of tuning, the Falcon Pro is V-shaped, with prominent mid-bass and upper-mids. That description sells them short, though, as the bass is rather impressive.

The Falcon Pro sound “physical,” with each note having a distinct weight.

Changing the filters to adjust the sound

Before delving further into the sound description, I will discuss a bit about the filters and why I ended up with the Transparency filters instead of the other two.

With the longest “Atmospheric” filters, the treble region sounds too “dark.” Cymbal hits are distant, and the mid-bass bloom seeps into everything. With some laid-back acoustic tracks, this filter works well, but for most of my playlist, this one did not work out.

Then comes the mid-length “Reference” filters. Unfortunately, the sound with these filters is not very resolving. On the plus side, the mid-bass, upper-mids, and lower-treble are fairly even in terms of magnitude. The highs do not sound as dark as before, but they could do with more sparkle.

Finally, I ended up with the shortest “Transparency” filters.

The bass quantity remains the same, but the upper-mids and lower-treble gain more focus. Lower-mids still sound recessed, and the upper-treble is not pronounced using any of the filters. But the Transparency filter has the greatest resolution among the three and strikes a nice balance overall.

For this reason, I analyzed the Falcon Pro using the Transparency filters. I encourage trying the other two filters and finding the one that suits you the best.

Bold, brash, and overzealous at times.

Dunu swept aside the Harman target (mimicking what has become a trend nowadays) and went with their own flavor of bass tuning. Bass starts a very early rise, being +5dB over the lower-mids from 300 Hz and increasing in magnitude as the frequencies drop.

Snare hits and percussion sound dense. The understroke of the keyboard and pianos are in focus, and notes have added weight behind them. Sub-bass has a good amount of rumble, though the rumble is not as pronounced as IEMs targeting the Harman bass shelf.

Bass bleeds into mids on tracks that have mid-bass bloom. Bass decay is also longer than I prefer, which results in bass notes bleeding into each other in fast bass sections. Bass texture is good, and can be made even better by slightly toning down the upper-bass region via EQ.

The Falcon Pro are devoid of any shout or shrillness in the mids, which is great.

The bad news is the lower-mid recession.

Male vocals sound drowned out. Subtleties are lost, and vocal articulations are not well-reproduced.

Female vocals fare a lot better and sound tonally correct. Strings sound denser than they are in the mix, though this may be desirable to some. If you like a sharper or more “neutral” reproduction of strings, the Falcon Pro might disappoint in that regard.

I do enjoy the denser reproduction, even though distorted guitar riffs lose their sharpness or “attack” as a result.

Treble is most present using the Transparency filter. Even so, the treble response is most prominent around the lower-treble peak near 5kHz.

Thankfully, the treble has great timbre. There is no splashiness or sibilance, and this tuning will be desired by those sensitive to treble.

Due to the vented design, the soundstage is excellent for the price tier. Stage width is above average, whereas stage depth and height are excellent.

Imaging is just as impressive, with spot-on positional cues while gaming or watching movies. You will be hard-pressed to find IEMs with better imaging than the Falcon Pro in the USD$100 – 250 segment.

Macrodynamic punch, i.e., sudden increase or decrease in volume, is a mixed bag.

When it comes to bass drops, the Falcon Pro deliver with gusto, as the bassy tuning helps deliver the sense of physicality. When it comes to the other end of the spectrum, things change. Orchestral rise or crescendo lacks the excitement one should feel.

Microdynamics (subtle gradation in volume) are excellent, class-leading. On Counting Crow’s Miami, the vocals have a slight increase and decrease in volume, and this can be picked up easily on the Falcon Pro.

The Moondrop Kato are single dynamic IEMs with a single-dynamic driver like the Falcon Pro, having a similar (but not the same) DLC diaphragm.

Dunu puts Moondrop to shame with the supplied accessories, both in terms of quality and quantity.

As for the build quality, I find them both excellent, though the Falcon Pro offer a more snug fit. Comfort is good on both, though isolation is better on the Kato.

In terms of sound, the tuning philosophies are the opposite of each other.

The Kato goes for a leaner, more neutral, or reference-like tuning. The upper-midrange is prominent, and bass is controlled in the mid-bass region. The bass can even sound anemic on the Kato, which is not the case on the Falcon Pro.

Lower-mids are better on the Kato, with a more neutral reproduction of string instruments. I prefer the Kato for monitoring or such tasks, as they do not color the sound as much as the Falcon Pro.

Treble is also livelier on the Kato, even though there is a hint of splashiness there. I find the Falcon Pro to have better timbre in the highs, even though extension is lacking.

The Kato also come with replaceable nozzles, but those do not change the sound as drastically as the Falcon Pro nozzles. Imaging and staging are where Falcon Pro pull ahead. Microdynamics are another aspect where Falcon Pro stand apart.

Overall, the denser and more colored tuning of the Falcon Pro favors rock, pop, and such energetic genres well. For monitoring, or if someone needs a fairly neutral representation of music, the Moondrop Kato are more suited to such a workload.

They do grow on you, though, as it took nearly half a year for me to realize that they are absolutely a keeper pair of IEMs.

The Falcon Pro have managed to garner a cult following, evident by how quickly Dunu’s Vernus (a re-tuned version of the Falcon Pro) sold out. Dunu did not follow the trend just for the sake of being different. Instead, they had a vision, one that mostly worked out.

Dunu’s Falcon Pro stand out amid a myriad of similarly tuned IEMs and walk the fine line between pleasant warmth and excessive bass. They may not be the most resolving and have a recessed lower-midrange, but the overall presentation is addictive enough to overlook those shortcomings.