Can another near-identical revision of the venerable AP80 DAP deliver something new to the budget segment?

Thank you to Emma and Hidizs for providing the AP80 PRO-X for review purposes.

The previous (non-X) version, the AP80 PRO, is my daily go-to for on-the-go listening. I pair it with the original Chord Mojo for more output power and use it to audition and review most of the IEMs and headphones I listen to.

Over the last year or so, the AP80 PRO has proven to be a terrific little device offering amazing functionality, balanced and single-ended outputs, and a nifty touchscreen, all in an incredibly well-made yet tiny aluminum body.

So, when Hidizs reached out to me regarding the new X model, of course, I was interested. 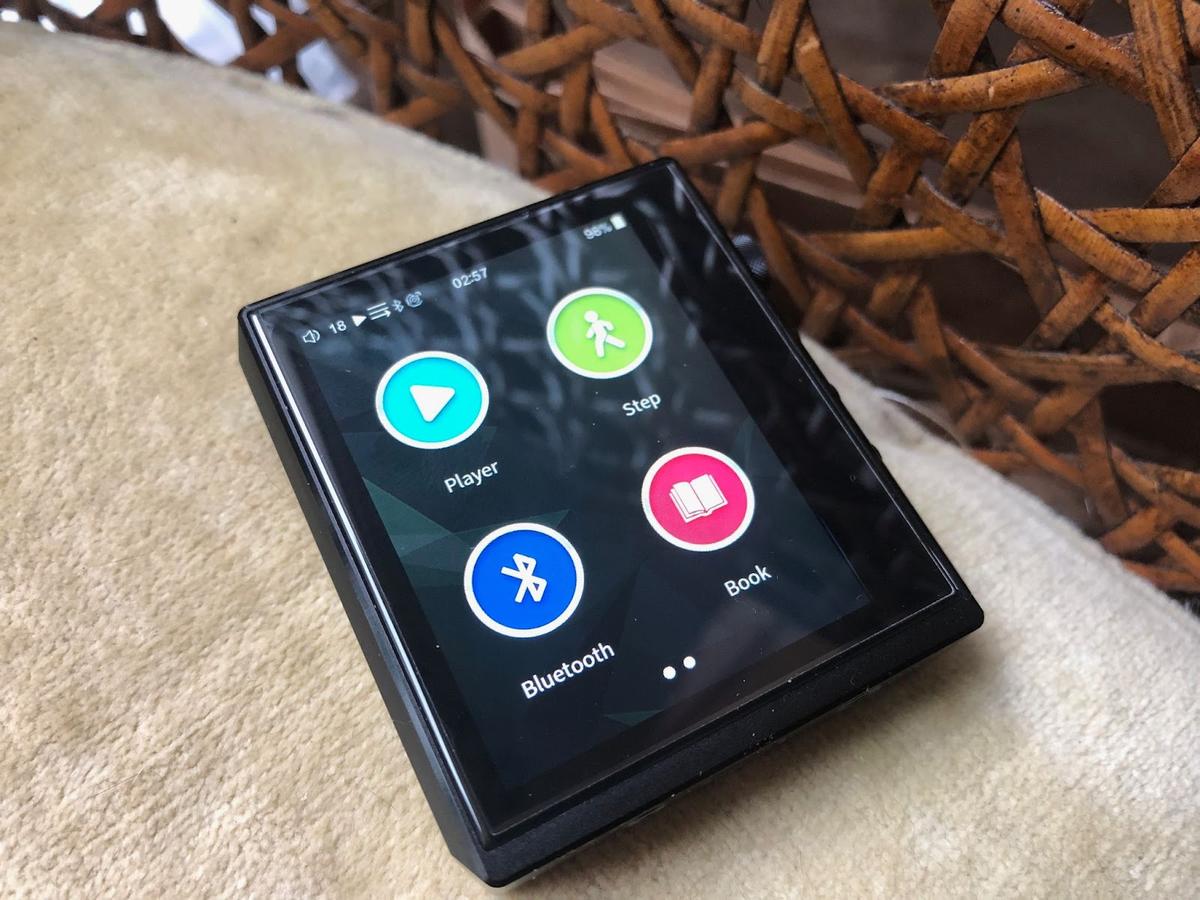 Although the AP80 PRO-X doesn’t offer much in the way of new or innovative hardware improvements over the previous model, this budget DAP never fails to impress. It still feels, looks, and works great! However, owners of the PRO model can certainly pass on this upgrade unless official MQA unfolding is desired. The only real compromises to be found with the AP80 PRO-X are no streaming service support and limited output power. Without mating it to a high-power DAC-amp, stick with very efficient IEMs and headphones. The AP80 PRO and now the PRO-X continue to be terrific, ruggedly built, and eminently pocketable, portable audio sources, and I still recommend them both strongly as the budget DAPs to beat.

The X is virtually identical to the PRO model, sporting the same shape, size, screen, and button and port layout. The angular contours on the right side are slightly narrower (and X-shaped), but unless you’ve got them side-by-side, you likely won’t notice.

Inside the new X are updated dual ESS ES9219C chips (vs. ES9218P – I choose to believe that’s ‘C’ for Current and ‘P’ for Previous – but I digress), which enables MQA decoding and lower standby power consumption. Beyond that, the measurements and specifications are near identical.

The chipset change has removed the radio function of the PRO from the X.

The X is slightly more expensive than the PRO (about USD$15 at the time of writing), but both offer terrific value for a DAP under the USD$200 price point. If MQA decoding (but no streaming app functionality) is important to you, then the X offers something the PRO does not.

Is the X worth the upgrade if you are already a PRO or non-PRO AP80 owner?

Hidizs (pronounced ‘hid-is’) was founded in 2009 by a group of technicians with HiFi audio research and development experience that aimed “to produce a superior and affordable pocket HiFi audio device.”

In 2010 they started researching the global HiFi audio market, and they officially finalized their team in 2012. The AP100, launched in 2014, was the first music player created by Hidizs. In 2017, they funded the AP200 DAP through Kickstarter.

2018 saw the release of the original AP80 DAP, and in 2019 the Hidizs team branched out and produced the Mermaid MS4 IEMs.

Unboxing the X is a nearly identical experience to the PRO. The logoed black cardboard box is attractive, professional, and suitable for this budget product. It’s slightly flashier than the PRO box as it features a glossy pic of the device on the cover.

Missing this time around is the inclusion of a silicone case (one comes with the PRO). A new leather case is available for purchase from Hidizs.

Although not advertised, the PRO cases will fit the X.

For AP80 PRO owners, it’s like deja-vu, all over again. The X hasn’t changed much since I reviewed the PRO nearly two years ago.

Ya know what they say. If it ain’t broke…

The glass-faced, aluminum body feels high-end and well-made. It would be entirely appropriate for a far more expensive device to be constructed to this level.

There’s no visible plastic, and at about half the size of a deck of cards, the AP80 PRO-X will impress most any gearhead. It’s heavy enough to feel valuable and fits great in the hand and pocket.

The 2.45” Samsung IPS screen is slightly offset to the left on the front, which is odd, but you quickly get used to it. The 480×360 touchscreen is responsive and remains clear and legible even outside in bright light.

The left side has a micro SD slot (there is no internal memory, but it supports up to 512Gb cards). You’ll need to use a thin tool or another micro SD to remove an inserted card. The bottom has a 2.5mm TRRS balanced headphone jack, USB-C port, and 3.5mm TRS headphone jack.

The right side has a high-quality Japanese Alps rotary potentiometer volume/power knob and three aluminum buttons for forward, back, and play/pause. The aluminum case flares slightly on this side to protect the knob from accidental activation. Unfortunately, the knob has a bit of wiggle, and the identical tiny buttons are tough to distinguish from each other.

The middle button is play/pause, and that’s still about all I can discern in my pocket after a couple of years of usage.

Like the AP80 PRO, the X does not use Android as its OS (operating system); instead, it runs on the HiBy OS 3.0 Music Player. This means there is no support for Android APK loading or customization. HiBy produces its own line of DAPs in addition to licensing its OS to other companies.

Interestingly, while MQA is touted as a new feature for the X (it’s now written on the back), I found the PRO does appear to recognize and play MQA files, although I’m unclear whether this is fully decoded or rendered. Either way, it’s now officially supported, and the X can perform the final unfold (8X) of an MQA file.

The X truly is a do-it-all device, and the HiBy software is packed with filters, EQ settings, and sound shaping options. HiBy calls their digital signal processing MSEB (Mage Sound 8-ball Tuning), and combined with the list of internal playback settings, there are more options available than any listener needs for tweaking the music.

The only thing really missing is streaming support, so Tidal, Spotify, etc. users are left out.

For a detailed list of MSEB and playback settings, please check out my AP80 PRO review.

Like the PRO, the X can function as a USB DAC/amp if plugged into a computer or as a source for another DAC.

Additionally, Bluetooth connectivity goes two ways so that it can send or receive signals. By pairing the X with the HiByMusic player app on your smartphone, you can control music playback from your phone without ever taking the X out of your pocket.

Internally, not much has changed from the PRO. The same FPGA chip (HBC3000) responsible for noise and jitter correction supports native DSD64/128/256 playback. The same Ingenic X1000 processor (also used by FiiO and HiBy) still feels snappy enough for navigation.

The 800mAh 3.7V internal Li-Po battery is indeed the same as before, and usage lifespan varies from 6-11 hours depending on the file format, single-ended or balanced output, Bluetooth, volume, screen on-time, etc. While not boasting a class-leading battery life, a full charge happens in about 1 hour.

Due to the huge number of audio options available through the HiBy software, I completed all my testing and notes with settings ‘flat’ and unaltered unless noted.

In a blind listening test, I cannot distinguish the PRO from the X.

And that’s not a bad thing.

The X has a very similar clear and transparent sound to the PRO. This is likely due to the SOC (system on a chip) architecture of the ESS9219C chipset being an evolution of the previous ES9218P. I find the sound signature to produce a neutral and natural-sounding base upon which the audio tweaking settings can build.

Limitations of headphone pairings are more due to power restraints than the sound signature. The 70mW from the single-ended 3.5mm output is sufficient for highly efficient headphones (such as the Meze 99 Classics) and most IEMs, but in most cases, the higher-power 2.5mm output provides superior sound.

Clarity, dynamics, and channel separation all seem improved from the balanced output.

However, 190mW is still not a lot of power on tap, and Hidizs recommends 200 Ohms as a maximum impedance for connected headphones. The 300 Ohm Sennheiser HD650 sound very flat and uninteresting from the AP80 PRO-X. Pair wisely, and the tiny AP80 PRO-X will sound great.

There is no discernable hiss or unwanted noise when using highly-efficient IEMs.

Although the AP80 PRO-X doesn’t offer much in the way of new or innovative hardware improvements over the previous model, this budget DAP never fails to impress. It still feels, looks, and works great! However, owners of the PRO model can certainly pass on this upgrade unless official MQA unfolding is desired.

The portable headphone audio camp divides between phone + dongle DAC/amp supporters and DAP users. Both methods have their benefits and drawbacks, but I increasingly appreciate task-dedicated devices.

Ebooks are better read on a Kindle. Music is better listened to on a device that can swap SD cards, has dual headphone jacks, and doesn’t drain my phone battery. I also appreciate that a dedicated device makes me focus on one thing rather than indulging my wandering attention span.

Sure, there’s a step counter and ebook reader for sadists who want to read on a 2.4” screen, but I can’t imagine anyone actually using these features.

The only real compromises to be found with the AP80 PRO-X are no streaming service support and limited output power. Without mating it to a high-power DAC-amp, stick with very efficient IEMs and headphones.

The AP80 PRO and now the PRO-X continue to be terrific, ruggedly built, and eminently pocketable, portable audio sources, and I still recommend them both strongly as the budget DAPs to beat.