The ST5 are merely average in most departments but may be a decent IEM to consider for folks wanting a consumer-friendly tuning, though there are likely better options.

Thank you, HiFiGo, for providing the TRN ST5 review unit.

In the budget CHI-FI arena, IEMs are released on an almost weekly basis, the vast majority of which are, unfortunately, sidegrades and forgettable. A week or two later, another pair of IEMs or, dare I say – hype-train – gets pumped out, and we repeat the cycle ad nauseum.

How many of these IEMs are still talked about weeks after release? Therein lies the rub: those that stand the test of time may very well be worthy of being in our collection, but they are the minority; many others fall by the way-side and remain a footnote in audio forums. 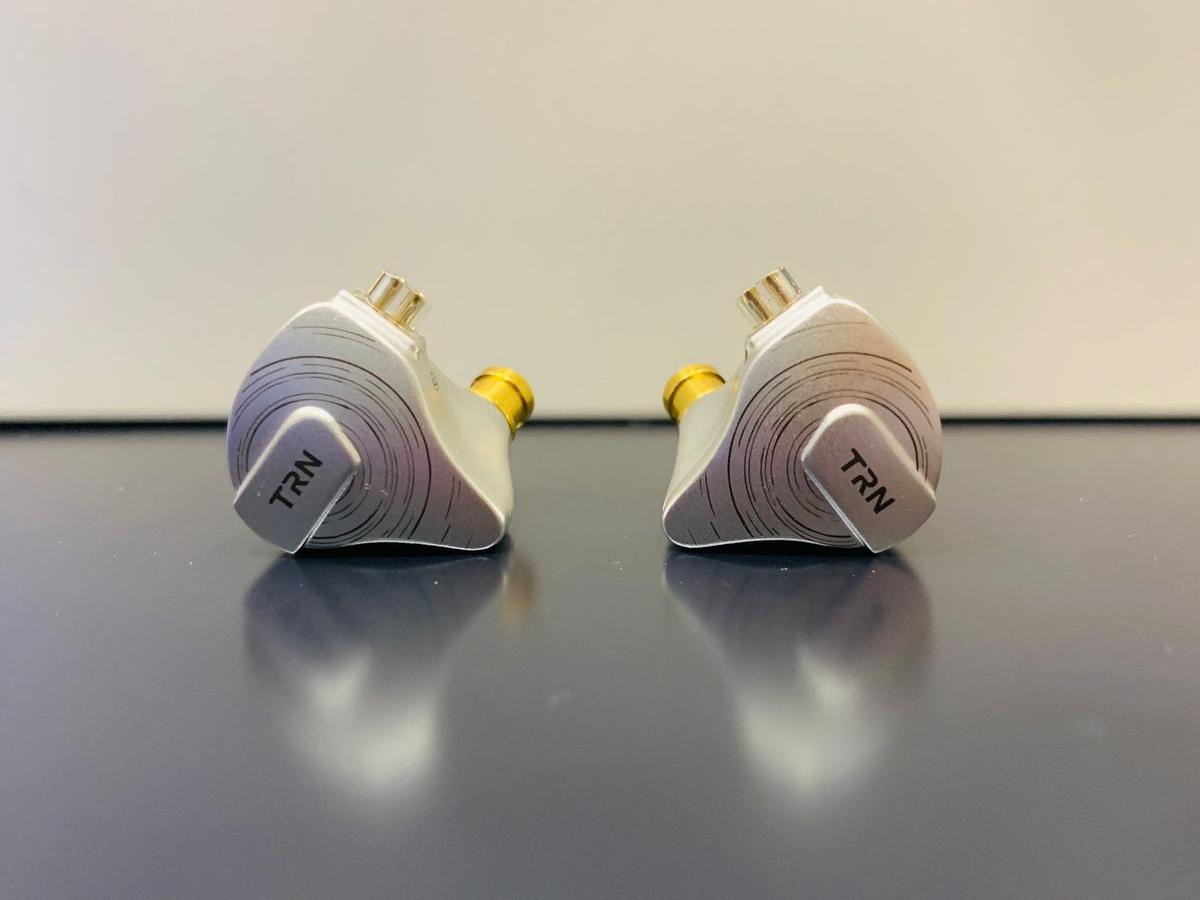 Technicalities are middling, there’s incoherency present among the different drivers, and the mid-bass comes off as one-noted with a marked mid-bass bleed. BA timbre is present in spades, and to top it off, there’s driver flex, and this IEM’s high sensitivity produces hiss on some sources. However, the tonality is quite consumer-friendly, and bassheads will have a field day with the bass quantity on offer. Also, a really nice touch is the modular cable that allows one to pair various balanced and unbalanced sources with the ST5. The ST5 are very easy to drive, ergonomics are top-notch, and isolation is also above average.

Today, we will review the TRN ST5 hybrid! Stay tuned to find out if they are truly something game-changing or just another run-of-the-mill forgettable sidegrade!

TRN is one of the pioneers of the budget CHI-FI industry. Some of their notable IEMs include the BAX, VX Pro, V90, and TA1 Max. TRN also recently launched their first planar IEM, the Kirin, and muscled into the earbud arena with the EMX and EMA.

Other than IEMs, they also do OEM (original equipment manufacturing) for other brands and dabble with accessories such as cables.

In addition, TRN is a huge player in Bluetooth products, launching adapters (such as the BT20, and BT20S Pro) and TWS IEMs (such as the T300).

The accessories are decent enough for a budget pair, although glaringly, no carrying case or pouch is provided.

This adaptable cable allows one to pair the ST5 with a myriad of balanced and unbalanced sources.

The cable itself is a bit tangly, though it has minimal microphonics. There is a chin cinch to give stability, and I like that it is a 2-pin connector at the proximal end, as I had my fair share of MMCX mishaps with frequent cable changes.

To not add aftermarket confounders, which may affect the sound, I completed the following review with the stock ear tips and cable.

The ST5’s shells are reportedly produced from high-precision 5-axis CNC (computerized numerical control) manufacturing, using aerospace-grade magnesium alloy. Each shell is then hand-polished and covered with a multi-layer ceramic coating.

The shells come in a silver hue, with an L and R circle on the housing indicating the left and right sides, respectively.

Isolation on the ST5 is above average, though not class-leading, due to vents on the shells.

The ST5 shells are very light yet smooth and ergonomic. They are quite effortless to use, and their comfort is top-notch.

Disappointingly, despite being vented, I did detect occasional driver flex, but this may depend on the ear tips used and your ear anatomy.

Just a while back, beryllium dynamic drivers were all the rage for IEMs. Recently, they have been usurped by LCP (liquid crystal polymer) drivers and planars, the latter of which are the latest hype.

As a throwback to yesteryears, the ST5 utilizes a 10 mm beryllium-plated dynamic driver to handle the bass frequencies. TRN says this unique rigid material provides smooth performance and robust durability and purportedly adds speed and quick transients to the bass response.

The drivers are arranged in a three-way frequency crossover. The midrange is handled by two 50060 BA drivers, while two 30095 tweeter BAs tackle the treble frequencies. As such, there are a total of 5 drivers per side, giving the ST5 their name.

Interestingly, the ST5 was also designed with 3 linear vents in each shell. TRN says this helps equalize internal chamber pressures, which results in a tight and fast bass, and also increases clarity, micro-details, and soundstage.

Of course, all this marketing gobbledygook may not translate to actual sonic fidelity, so let’s move on to the actual sound. That’s the real proof in the pudding!

The ST5 are very easy to drive. Amplification is not needed.

However, due to their high sensitivity, the ST5 may hiss with sources with a poor noise floor. Those who are particular about hiss and noise might want to use a clean source or look elsewhere.

Bass quantity is quite north of neutral and is just shy of bonafide basshead levels. The bass is focused mainly in the mid-bass, contrary to the graphs. There is a deep rumble at the sub-bass with good extension down to as low as 20 Hz.

The bass may be a bit intrusive for certain music genres where a more neutral bass is desired – for example, classical and jazz – but bassheads should feel quite at home.

Unfortunately, despite the purported benefits of a beryllium DD, the bass quality is sub-par. There’s copious mid-bass bleed, and the bass is sluggish and not too textured. It may even come off as “one-noted” during fast and complex bass riffs.

The bass is boomy and is tuned for outright quantity over quality; those that want a tight and fast bass will be disappointed.

The lower midrange is slightly depressed as per the V-shaped tuning. The aforementioned mid-bass bleed impinges into the midrange and causes a bit of muddying of this area. Some might like the added warmth, but transparency and clarity take a hit.

The upper midrange is slightly boosted, relatively smooth, and non-fatiguing unless played at loud volumes.

The lower treble continues on from the slight upper mids boost, and there’s a peak in the upper treble after that. Sibilance is moderate, and treble extension is decent with some sparkle and air.

Micro-details and clarity at the treble region are quite decent, but unfortunately, incoherency between the DD and BA drivers rears its ugly head.

The DD handling the bass frequencies is noticeably slower than the more agile BAs, so basslines sound a tinge behind, especially on complex tracks.

Timbre accuracy is also incoherent between the two driver types, with a marked BA timbre present at the midrange and treble (which the BA drivers handle), giving an unnatural sheen to acoustic instruments.

Regarding technicalities, the soundstage is average in all three directions, but imaging and instrument separation are pretty decent for a budget hybrid.

The ST5 will be compared against some other budget hybrids. Single DD, planars, and pure BA IEMs were left out of the comparison as the different transducer types have their own pros and cons.

The VX Pro, an older hybrid from TRN, are also V-shaped.

The VX Pro have greater treble extension and clarity, with superior micro-details, imaging, and instrument separation. However, the VX Pro do have more sibilance. Note weight is slightly thinner on the VX Pro, with a less invasive bass.

Build quality is good on both siblings, but the VX Pro do not have a modular cable. Both pairs, unfortunately, suffer from driver flex.

New does not translate to better: I still prefer the older VX Pro, as they have better technical performance, with a more refined tonality, though they may be a tinge more fatiguing.

The Meteor are a U-shaped hybrid with less bass and treble quantity than the ST5.

Tonally, the Meteor are more laid back and smooth, with less sibilance and fatigue. In technicalities, the Meteor are a step behind, with a less expansive soundstage and worse clarity, instrument separation, micro-details, and imaging.

These two sets are complementary instead of competing, as they are polar opposites in tuning; the Meteor are more analogue-sounding, whereas the ST5 are more for head-banging fun.

The keyword to describe the TRN ST5 is “meh.”

Technicalities are middling, there’s incoherency present among the different drivers, and the mid-bass comes off as one-noted with a marked mid-bass bleed. BA timbre is present in spades, and to top it off, there’s driver flex, and this IEM’s high sensitivity produces hiss on some sources.

Even compared to other IEMs in TRN’s own stable, the ST5 do not best their older siblings, the TRN VX Pro.

There are some areas of redemption, though – the tonality is quite consumer-friendly, and bassheads will have a field day with the bass quantity on offer. Also, a really nice touch is the modular cable that allows one to pair various balanced and unbalanced sources with the ST5.

The ST5 are very easy to drive, with no amplification required, ergonomics are top-notch, and isolation is also above average.

However, beyond those plus points, the ST5 are bang average in the big scheme of things, and I do think they may be forgotten after a few weeks – that’s how fast this industry moves. Being average and sonically tepid is as good as a death sentence in the ultra cut-throat budget CHI-FI segment.