The LZ Audio A7 gives you tuning options. It can be impressively neutral – but only when the listener wants it to be.

LZ Audio, a Chinese IEM manufacturer, have just released the latest in their “A” series of IEMs – the A7. The USD$338 A7 is a 7-driver hybrid (1 DD for bass, 4 BA’s for midrange and treble, and 2 piezoelectric for ultra-high frequencies).

Before this review, I had never heard an IEM by LZ, and my thought going in was that this would probably be a familiar story – yet another IEM that sounds good, but not quite good enough to fight its way above its competition. Fortunately, I was pleasantly surprised by the A7. 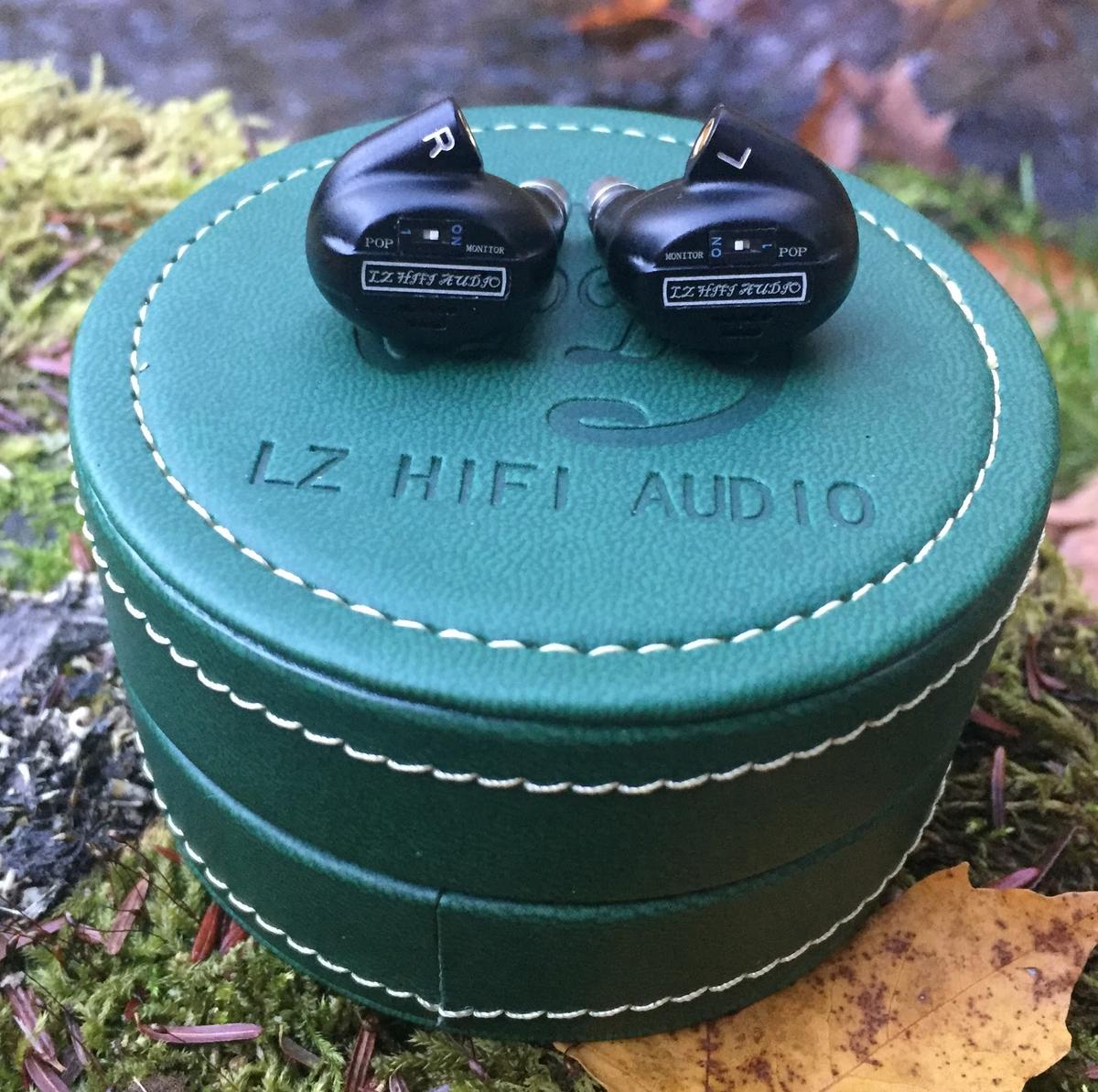 On the negative side, the bass is a bit lifeless (although quite full and somewhat impactful), and the overall dynamic ability of the IEMs is restricted. On the other hand, the midrange is well-tuned and realistic and the high end is quite resolving at the USD$338 price point, with only a little grain. For those looking for a warmer, more closed-in sound, the other nozzles are available, and turning it to pop mode will add a healthy dose of mid-bass boost to the equation, but for my taste, “monitor mode” with the stainless steel nozzles is the way to go.

LZ Audio’s “gimmick” is that they give you a number of different nozzles that filter frequencies in various ways, giving you an option to switch between various tunings.

Although I’d overall call the tonal balance of the A7 “warm” with all of these nozzles, they do offer variations on the overall warm balance by reducing and increasing upper midrange and treble quantity.

From brightest to warmest/darkest, these nozzles are:

I most enjoyed these with the brighter-sounding nozzles, but they certainly sound nice with all of them, and having the darker-sounding ones on hand can be useful (more on that later).

The A7 also comes with a switch on the body that allows you to switch between “pop” and “monitor” mode. After coming away from pop mode unimpressed (I find them too midbassy and V-shaped), I spent most of my listening time in monitor mode. (The switch is a bit too small for me to get a fingernail in there, so it’s not something you can change at the drop of a hat.)

This A7 unit was provided by Linsoul in exchange for an honest review.

Interestingly enough, LZ provides differing impedance and sensitivity numbers for pop and monitor mode. Overall, these are very sensitive earphones, taking less volume than many other IEMs, meaning you shouldn’t have any problem driving them with your phone. So it’ll run well enough in either mode, off any device!

Alright, let’s get this out of the way: the LZ A7 is kind of goofy-looking. From the pop/monitor switch that switches between – for some reason – “ON” and “1” (why, LZ?), to the odd font that LZ Audio is written in, to the overall large amount of text on the body of the IEMs, these aren’t exactly trying to pull off stylishness.

But upon sending pictures to some friends, they were met more with endearment than with scorn, and I understand that – there is something endearingly nerdy about the way the A7 looks. Who cares that they aren’t going for style points? I certainly don’t – I like the way they look!

More importantly, I really like how they feel. IEM comfort is highly, highly subjective, but as someone who rarely finds IEMs comfortable, I feel like I could wear the A7 for hours – and that’s with the stock tips!

The A7 comes with a pretty nice variety of eartips of various sizes – not the biggest arsenal around, but certainly big enough for most people. They also come with a fun tool to help you install different eartips.

One unfortunate aspect of the A7 is the case. While some earphones, like the Etymotic ones, come with small cases that I consider “pocket-friendly,” the A7 comes with a bulky, round case that would never fit in the average person’s pocket. Ideally, I’d like to see some more effort put into making these things portable for the average IEM user’s pockets.

That gripe aside, I think the A7 is a well-considered product in terms of usability and ergonomics. Just please include a more portable case next time, LZ!

When I receive a pair of headphones, I have a tendency to listen to them immediately without looking at the marketing material. I like to think this eliminates bias in my first impressions, but really it’s probably more to do with impatience than anything else. Oh well! Usually this works out for the best – but not with the A7.

Upon my first listen, despite noting some positive characteristics, I was overall unimpressed. The dynamics weren’t the best, but more importantly, the upper midrange sounded suppressed; the overall tone was thick and meaty, and a bit unrealistic.

Fortunately, after delving into the manual, I discovered the main selling point of the A7: it comes with five different nozzles, each of which offers a different tuning.

That, combined with the tiny “pop/monitor” switch (“pop” offers you more pronounced midbass and slightly less upper mids than monitor), allows the A7 a chameleon-like ability to switch freely between 10 different frequency responses – amazing indeed!

Frankly, though, I found myself sticking with the stainless steel nozzles – the brightest ones – on monitor mode for the entirety of my listening experience. This combination just “clicked” with me, and it sounds more like a proper tuning than anything else.

I suspect most people will find themselves in a similar situation, sticking with the one combination of settings that works best for them. Still, it’s never a bad thing for a product to be able to adapt to different users’ tastes, and I think it’s a fun gimmick.

And, reading other reviews, I find that people do have different tastes when it comes to nozzles. Although I find the tonal balance with the silver/blue nozzles to be on the warm side of things, others find it too bright and prefer the more suppressed upper midrange of the red nozzles.

Although my personal taste fits the brighter nozzles, I sometimes do find myself switching to the warmer ones (like gold) when my hearing gets a bit fatigued – and it’s quite nice to have that option with only one product. I didn’t like them at first, but I’ve come around somewhat! Still, I’d choose the brighter nozzles for daily use, without hesitation.

Although I quite like how they’re tuned with the silver nozzles, the poor dynamics still remain as a slight problem with the A7 – although it’s not that bad, really.

Of course, the A7 is a hybrid, and one of the biggest reasons to go with a hybrid driver configuration in an IEM is to attain that hard-hitting dynamic-driver bass without sacrificing resolution in the midrange and treble. I often find that this results in a slightly confusing sound, with a textural mismatch somewhere in the lower mids. With the A7, I don’t find this to be quite as much of a problem – more on that later.

The A7 possesses bass that I’d call quite decent for its price – it’s not the most hard-hitting or fastest-paced bass, and it has a slightly cottony leading edge to transients that’s pretty typical of dynamic-driver bass, but it has sufficient weight to deliver a nice punch when required.

I wouldn’t call the A7 the most “fun” or “driving” IEM on the planet, though – the bass isn’t quite fast enough to give the music a truly propulsive feel, and basslines tend to feel “slow” and “relaxed.”

If you’re a basshead, I’d steer clear of the A7, but if you’re simply looking for sufficiently weighty bass to play your average recording, the A7 will deliver that.

As long as you’re using the stainless steel nozzles and in monitor mode, the A7 possesses a midrange tonality that I’d call pretty close to ideal. It’s slightly warmer-than-neutral, I’d wager, but only slightly – if you’ve heard the Sennheiser HD600, I’d compare it to that, but with slightly less upper midrange bite.

Instruments and voices are very convincingly reproduced with not much stridency or harshness at all. It has that kind of immediacy and intimacy that so many people spend their whole audiophile careers looking for.

Of course, it is not the most expensive IEM in the world, and so the midrange isn’t perfect – a touch of distortion here and there that occasionally manifests as a type of harshness in the upper mids – but this harshness is usually at least partially innate to the recording, so I can’t say that it’s entirely the earphones’ fault.

There’s also a small suckout between 2 and 3 kHz – but unlike many midrange suckouts, I don’t find this one to greatly detract from realism, and may in fact be a big part of why the midrange sounds so unfatiguing.

The warmth in the lower mids can also make these sound ever-so-slightly “closed in,” but again, I’m really nitpicking here – these have mids that are quite good for their price.

If you purchase these, I’d highly, highly suggest using them with the stainless steel nozzles – at least try it. This setting gives them a very convincing and realistic midrange timbre, in contrast with the other nozzles, which come off to me as suppressed-sounding.

The A7 uses two Knowles BA drivers for treble, in tandem with two piezoelectric drivers for UHF (ultra-high frequencies). The result is an overall smooth, relaxed, and pretty resolving treble presentation with no offending spikes or peaks.

These earphones also have quite good treble extension, with the piezo drivers lending them enough air to lend the music that extra sense of realism.

Soundstage and other “unmeasurables”

Overall, the LZ doesn’t hugely impress with its soundstage, but I find it does its imaging above average in its field. Although it has an overall intimate sound, the instruments are well separated and positioned.

Overall, the A7’s BA drivers lend it above average resolution for its price (excluding bass), good separation, and a nice tonality. Its overall warm character helps eliminate some of the “lightweight tone” that can come from BA drivers.

Its center image could use some more specificity, and its bass could be faster, but overall I give the A7 relatively high marks for its technicalities.

Mostly, the problem I have with the A7 is its reluctance to deliver excitement in listening. It can sound very open and natural, but it has difficulty delivering truly pulse-pounding rhythms the way some other IEMs can. Particularly dynamic passages often lose their lustre.

Although I was initially put off by the LZ Audio A7’s sound signature, changing the nozzles was enough to change it into one of my favorite earphones at its price.

On the negative side, the bass is a bit lifeless (although quite full and somewhat impactful), and the overall dynamic ability of the IEMs is restricted. On the other hand, the midrange is well-tuned and realistic and the high end is quite resolving at the USD$338 price point, with only a little grain.

For those looking for a warmer, more closed-in sound, the other nozzles are available, and turning it to pop mode will add a healthy dose of mid-bass boost to the equation, but for my taste, “monitor mode” with the stainless steel nozzles is the way to go.

For the price, I can safely recommend the LZ A7, which finally presents a hybrid-configuration IEM that appeals to me. Bravo, LZ – wasn’t expecting this one!