It’s 1984. You just got out of a movie double feature of Ghostbusters and the Karate Kid (and you’re looking forward to watching Terminator and Indiana Jones and the Temple of Doom next weekend). Earlier today, you picked up Michael Jackson’s mega-popular Thriller CD and the hwottest new portable audiophile gadget on the market, the Sony CD Discman.

Now, all you need is a great pair of headphones to go with it. Luckily, Koss just released an awesome portable set of cans: the Porta Pro! Koss says they are “portable high-end supra-aural stereophones”; all the cool kids say they are “totally fresh and rad to the max!”

Koss continued to sell the Porta Pro virtually unchanged for 34 years—a longevity almost unheard of in the electronics world. However, it seems that when something reaches this age, it’s finally time to cut the cord. Now there’s the new Bluetooth Porta Pro Wireless. Can this sequel measure up to the original, or is it just going to be another disappointing remake? (Frankie Says) Relax, Koss knows what it’s doing.

34 year later, we now have 3 Ghostbuster movies, 4 Karate Kid movies (plus a new TV show), 4 Indiana Jones movies (with another announced), and 5 Terminator movies (with yet another one on the way).

The last three and a half decades have been overrun with mediocre sequels and remakes. The Porta Pro Wireless strives to avoid this trap.

What’s in the Box? 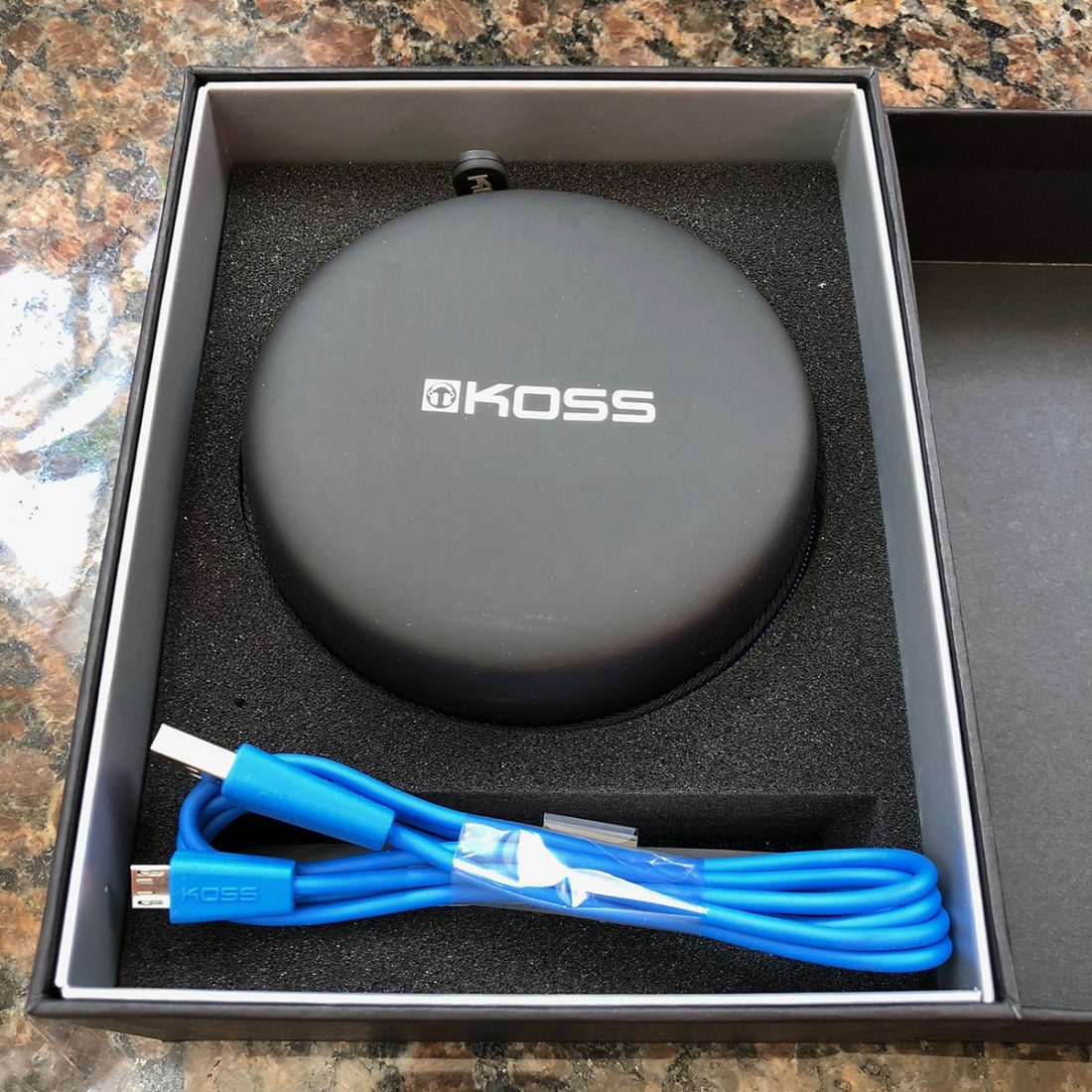 Inside the functional and attractive black cardboard box, you will find:

Upon opening, my headphones were completely unresponsive until charged.

Nothing looks like the Koss Porta Pro Wireless. Whether this is actually a pro or (Porta) con, I’ll leave that to your personal taste. The Porta Pro is retro-cool, but in a black plastic and not in a brushed aluminum sort of way.

Other vintage classic headphones like the Pioneer SE-L40 may be more luxurious, but they certainly aren’t still in production. If the Porta Pro didn’t sound so good, it wouldn’t be around either.

The design of the Porta Pro is truly unique. The shapes of the side pieces aren’t simply the typical round or oval cups that are ubiquitous in modern headphones. Instead, they’re shaped in the form of a musical note—each of which features a three-position adjustable temple pad (Comfort Zone setting) at the top, with the small round transducers mounted below using a pivoting ball and socket.

The headband is made up of two unpadded, spring-steel bands that slide against each other to fit the head. (Simple, light, and easily fine-tuned, but the headband is known for pulling out hair if you’re not careful when making adjustments!) When removed from the head, the band slides back to the non-extended length.

The ear plates fold up and expose a metal hook and loop that fasten the Porta Pro into a compact circular shape for storage. The originals came with a “just a tad too small” vinyl bag, which was frustrating to use. The zippered case is an immense improvement.

To paraphrase Henry Ford’s iconic quote, you can have the Porta Pro Wireless in “any color so long as it is black.” No other options at this point.

However, the wired version is currently available in a couple of limited-edition colors (Black Gold and Rhythm Beige), which include an inline remote and microphone on the non-removable cable. Red and white wired versions were also made in some markets. Massdrop even offers a wired Porta Pro X in all black.

The new colors and cable are the only changes to the original Porta Pro design. All the important bits are exactly the same as the original, maintaining form, function, and (most importantly) the sound that the Porta Pro is known for.

Aesthetic changes from the original to the new Wireless version are fairly subtle. The original turquoise blue found on the driver has been changed to a darker, bolder blue. The original blue on the Comfort Zone switch is now black. Decals are updated to say “Porta Pro Wireless.”

Of course, the original 1.35 m Y-type cord and 3.5 mm angled plug have been removed for the wireless version. Although touted as wireless, there is now a thicker 50 cm cord connecting both cups. Approximately 3 cm down on the right side is the integrated control module (Play/Pause, Start/Stop, Volume, Answer/End, etc.) and an integrated microphone.

Unfortunately, the buttons aren’t very easy to differentiate by touch, as they are a single continuous piece of rubber. Mirrored on the left side is a slightly larger module that contains the battery.

Weight is relatively unchanged, with the Porta Pro Wireless (~70 g) being only about 5 grams heavier than the original (~65 g).

My most serious complaint regarding the Porta Pro Wireless is the obnoxiously bright blue LED that flashes every few seconds when connected.

In anything but a well-lit room, the flash is bright enough to reflect off anything nearby. My wife described it as lightning that you see in your peripheral vision. It’s a constant and annoying distraction that’s easily solved by covering it with tape (but that shouldn’t be necessary in the first place).

The Comfort of Koss

The Porta Pro has always been a pair of remarkably comfortable on-ear headphones, likely attributable to its lightness, reasonable clamping force, and the adjustable “Comfort Zone” temple pads.

Although the band is not padded, it typically barely touches the head, and there is a bit of a floating sensation when using the Porta Pro. Even though these are far from the vise-like grip exhibited by some headphones, they stay in place well enough to be used while exercising (like running). They can be adjusted to fit almost anyone, from a child to those with a larger-than-average head.

The new cable on the Porta Pro Wireless is unobtrusive and easy to ignore. I had some concerns about the battery or control swinging in to touch my neck, but once I had it on, I noticed neither the cable nor the modules on it.

I’ve heard plenty of concerns regarding the durability and build quality of the Porta Pro. Let me preface this with: I take good care of my gear, and I’ve owned a pair of original Porta Pro for more than two decades (likely longer than some of our readers have been alive). I’ve used the lifetime-warranty repair option only once over that period of time.

The original’s cable is thin and fairly vulnerable to abuse, and eventually one side was working intermittently. Warranty repair was reasonably quick and entirely painless. They even included new foam pads.

Unfortunately, the lifetime warranty has been shortened to only one year with the Porta Pro Wireless.

This is likely due to the limited life span of the non-replaceable battery, but it’s disappointing nonetheless.

I find the build quality to be absolutely appropriate for the price: a primarily plastic construction with a sturdy steel band that perfectly balances weight and durability. Replaceable foam ear cushions are available from Koss at an extremely reasonable three pairs for $5!

Don’t make the mistake I did and try aftermarket faux-leather-type pads—they significantly degraded the sound into a muffled mess. Koss has been doing this for 34 years; they know best.

Ever since the announcement and promotional pictures of the Koss Porta Pro Wireless, there have been a lot of folks complaining that there is (in fact) a wire on the wireless version. In general, the criticisms seem to revolve around this decision, with many stating that they would rather see a significant design change that hides the wire and electronics in the band.

If It Works, Don’t Mess With It

Suffice to say, Koss is following a proven philosophy regarding these iconic headphones: If it works, don’t mess with it. Rather than changing the structural components and risking changing the sound, Koss added the Bluetooth functionality to the cord. This design is very reminiscent of the many current Bluetooth IEMs that are tethered together.

An additional advantage of the controls being on the cable is that they are easier to access than if they were positioned up on the ear plate itself.

I’ve had absolutely no connection issues with the Porta Pro Wireless. It features Bluetooth 4.1 with aptX audio codec, and I’ve experienced no dropouts within about 25 feet of my phone or tablet. As expected, across the house and behind a wall, things can get choppy. Anything less has been seamless.

Pairing with Apple devices (iPhone, iPad, and Macbook), an Android phone, and a Windows tablet all went smoothly. The remaining battery capacity was displayed on my iPhone (iOS 11.4), and was never an issue due to the lifespan of 12+ hours of regular use.

As an alternative to the Porta Pro Wireless, I tried to locate a decent Bluetooth module that offered the same sort of benefits (price, size, battery life, and sound quality) that could be added to the original wired Porta Pro.

I couldn’t find anything that could compete. Honestly, I wish I could purchase just the wire and Bluetooth dongles separately from Koss. It would be terrific to be able to just plug this functionality into any headphones with removable cables.

Despite some other reviews noting an audible background buzzing noise, I didn’t experience any unwanted noise using the Bluetooth interface. In fact, the Porta Pro Wireless sounds identical to the original wired version. Bravo Koss!

Contrary to the popular trend of complete isolation for portable headphones, the dynamic driver Porta Pro has an open-backed design that allows plenty of sound to pass through. This is actually my preferred noise-isolation mode while being out and about. I don’t like being so isolated from my environment that I miss helpful warnings like: “Duck! There’s a baseball about to hit you!”

However, because so much sound is let in, the Porta Pro is likely not the perfect choice for those in especially noisy surroundings. As with open-backed headphones, it leaks sound. However, this wasn’t a concern for me because I prefer listening at lower volumes that aren’t likely to bother those around me.

Although lacking much in the way of low sub-bass extension, bass response is generally pleasurable and fun. It remains reasonably controlled and tight-sounding, and gives the impression of fullness. It balances nicely with the midrange and treble in the overall flavor of the sound.

Continuing the smooth presentation of the treble, the midrange is clear and presents instruments and vocals naturally (if a bit warmly).

Best described as non-fatiguing and laid-back, the high frequency playback of the Porta Pro makes for a relaxing and pleasant listening session. While definitely not analytical, the treble response is enjoyable and presents enough detail to feel that you aren’t missing anything too important.

Why has the Porta Pro survived so long? The deadly value proposition of great sound quality and a ridiculously affordable price ($49 wired; $79 wireless) had elevated the Porta Pro into rarefied air.

It isn’t the most detailed and revealing, or the most appropriate for bassheads. It doesn’t have the best soundstage or resolution. But what the Porta Pro excels at is being an almost unbelievably good-enough jack-of-all-trades.

The new Porta Pro Wireless sounds just the same as its predecessors that Koss made 34 years ago.

Full disclosure: I still drive an old sports car made in 1984. I love much of the pop culture, music, and movies of 1984. And I still love the Koss Porta Pro circa 1984. I can remember my father owning a pair (rebranded as Radio Shack house brand “Realistic,” I believe) when I was a child.

Regardless of the dystopia presented in George Orwell’s classic, it was a year with much to offer. Koss decided to keep doing what works when it updated this classic. Thank goodness for that.