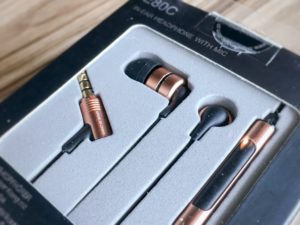 The award-winning SoundMagic E10 was SoundMagic‘s first shot to fame. Priced at a ridiculously cheap price for its sound quality, it was no wonder that the E10 was considered an amazing bargain among the audiophiles communities.

But today, the IEM in question is not E10 but the E80C. Before we get down to the review, let’s touch briefly on the SoundMagic IEMs product line.

Along with E10, they also have the E50 and E80. While E10 is known for their “fun” sounds, the E50 is tuned for details. As for the E80, it is designed to cater for the crowd who wants the best of both worlds.

The difference between the “S” and “C” series is the smartphone control. The “S” series requires manual adjustment between iOS and android devices. The one-button control’s main functionality is for answering phone calls only.

On the other hand, the “C” series automatically detects the device’s OS. It also allows you to have more controls (play, pause, answer calls and volume control) over the smartphone.

At about $40 difference between the “S” and “C” series, you should consider your usage pattern before plunging the money. I personally find it rare for anyone who frequently switches between different devices.

The E80C comes jam-packed with a variety of accessories. 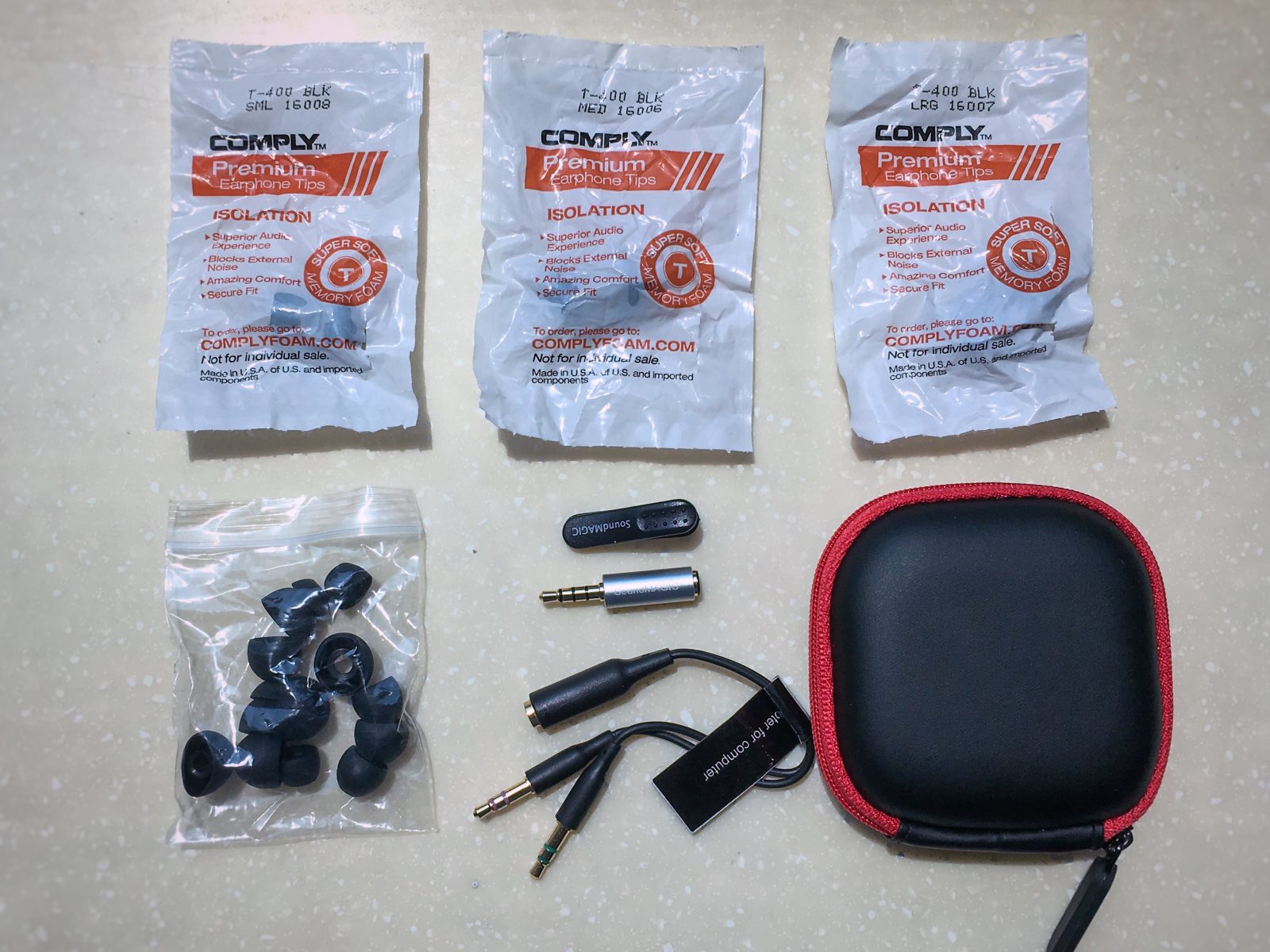 The moment you lay your hands on the gold-plated E80C, you feel a sense of quality. The barrel shaped housing made from smooth aluminum exudes a touch of classiness.

The angled jack is just good design. This reduces the amount of stress on the joint between the cable and jack. I have seen too many IEMs with straight jacks, like the Apple Earpods, that have frayed wires exposed at the joint. More IEMs should incorporate this feature.

The cables are braided, with a slight touch of gloss on it, giving the E80C a unique look. The cable’s length at 1.2m is too long for my liking. I mostly use IEM when I’m traveling around. The cable becomes slightly unwieldy and gets in my way when I’m moving around.

The 90 degree angled earbuds fit well into my ear canal and I can wear them for hours with no sign of physical discomfort.

The E80C offers decent noise isolation. The sound of traffic quickly fades away once the music kicks in. However, noisy conversation still can be overheard clearly.

You can achieve a cleaner seal with the change of the silicone tips but that really depends on the individual. You can use the Comply foam tips provided for extra isolation.

There are sound leakages when the music is played at a higher volume. This IEM will not be very suitable at quiet workplaces.

Is your audio source powering your headphone properly? Check out our Headphone Power Calculator.

The E80C has an unusually higher impedance (64Ω) than most IEMs. Luckily, the sensitivity is pretty good at 102 db/mw. You will only need 0.25 volts RMS to drive the IEM to 100 dBSPL (rock concert level). Most modern mobile devices will be able to supply enough voltage for the E80C.

SoundMAGIC attributes the higher impedance to the material of the 10mm dynamic driver. It is made from high purity copper winding material.

Listening to “Save the World” by Swedish House Mafia showcases the good bass attack that E80C possesses. However, I felt that it lack the punch that a 1More Triple Driver can bring to the table.

As for the sub bass test, I ran the E80C through “Intro” by Yosi Horikawa. I will say it perform decently. You can feel the rumble but it lacks the dynamism when compared to the 1More Triple Driver.

Totally no complaints in this area of frequency response. Vocals are lush and crisp. When compared with the Apple Earpods over Imogen Heap’s “Hide and Seek“, I will say it is slightly above par in terms of details.

You can hear the breath of the singer with more clarity. The ambiance build up is also more impactful.

This is where I felt the E80C could do better. I heard that the E80C is a bright IEM and my testing proves me right. The trebles are enthusiastic and slightly excessive. Depending on the individual, your ears can get fatigued after listening to EDMs and rock songs. On a positive note, there were no significant sibilance nor distortion.

I like using the period between 0:25 – 0:35 of “Save the World” to test for separation. For poorer performing IEM like the Apple Earpods, you cannot clearly hear the dynamism of the three frequency response happening at the same time. But the E80C valiantly keeps each frequency (bass, mids, treble) distinct.

Overall, I am generally pleased with the E80C. For less than $100, you get an IEM with great build quality and an assortment of accessories, including Comply tips, which normally would not be included at such a price. The sound signature has decent bass, detailed mids and no treble distortion. You just have to make do with the highs. But if you are not into song genres that are treble-focused like Jazz, you will do just fine with the E80C. 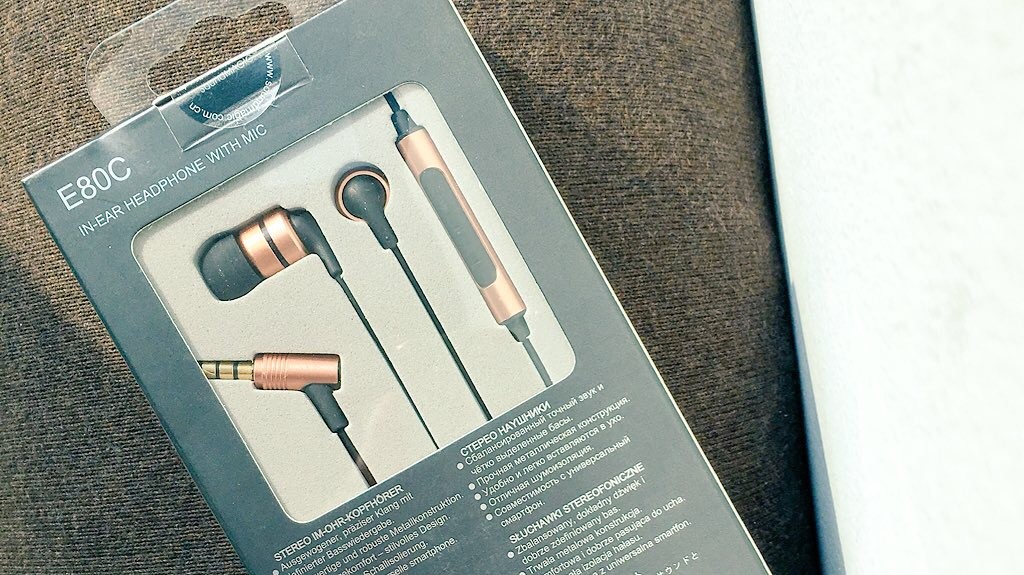 Buy “SoundMagic E80C” on Amazon
What We Like
What We Don't Like
Filed Under:
budget
E10
E50
E80C
E80S
iem
SoundMAGIC