Have a tight budget but want a great, balanced audio experience? Then step right up!

In the last couple or so years, the chi-fi audio gear has rapidly grown from making cheap and crappy earbuds to excellent sounding earphones (read LZ A4) and one of the new emerging companies is Tin Audio.

Tin Audio is relatively new to the audiophile scene when it was launched in 2010 but it already is loved by many audiophiles and one of their hit IEM is their T2 model. But that one has been reviewed quite a lot these days, so I thought, why not review something that is a bit less known in the audiophile community? Hence, I got the Tin Audio T1!

I’ve used the Tin Audio T1 for about 3 months now (and this review is long overdue) have listened to them for at least a total time of 60-70 hours using various genres of soundtracks in which I have got a pretty good impression about the earphones. Also, before trying them out, I have burned them in for about 24 hours using pink and white noise.

But first, a quick message: I had received the Tin Audio T1 for free from Penon Audio for this review. This review was held up due to some problems and thus I was not able to review it on time. I apologize to Penon Audio, Headphonesty and to you viewers for keeping you waiting. But this doesn’t mean that I have been incentivized by them to write this review. All the words that I have written here are my own.

So, now that we got that out of the way, let’s get on with the review, shall we? 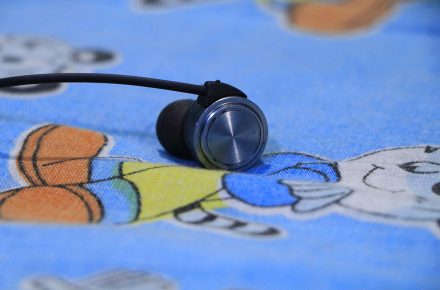 “The Creative SXFI Amp does some things flat-out amazing. There is a certain joy when you finally hit the sweet spot with them. The soundstage expansion and speaker-like presentation is no joke, and a harbinger of what the future of audio might be like”

At a $30 price point, the packaging of the IEMs really exceeded my expectations. Upon opening the white cardboard box, you are greeted by a nice blue faux leather box which opens like a small book. This was just beautiful and I have never seen such a nice box included with a $30 IEM. Upon opening, the box reveals the manual, under which rests the IEM in a nice foam holder. Removing the holder from its position will reveal a number of silicon ear tips stored in a plastic bag. 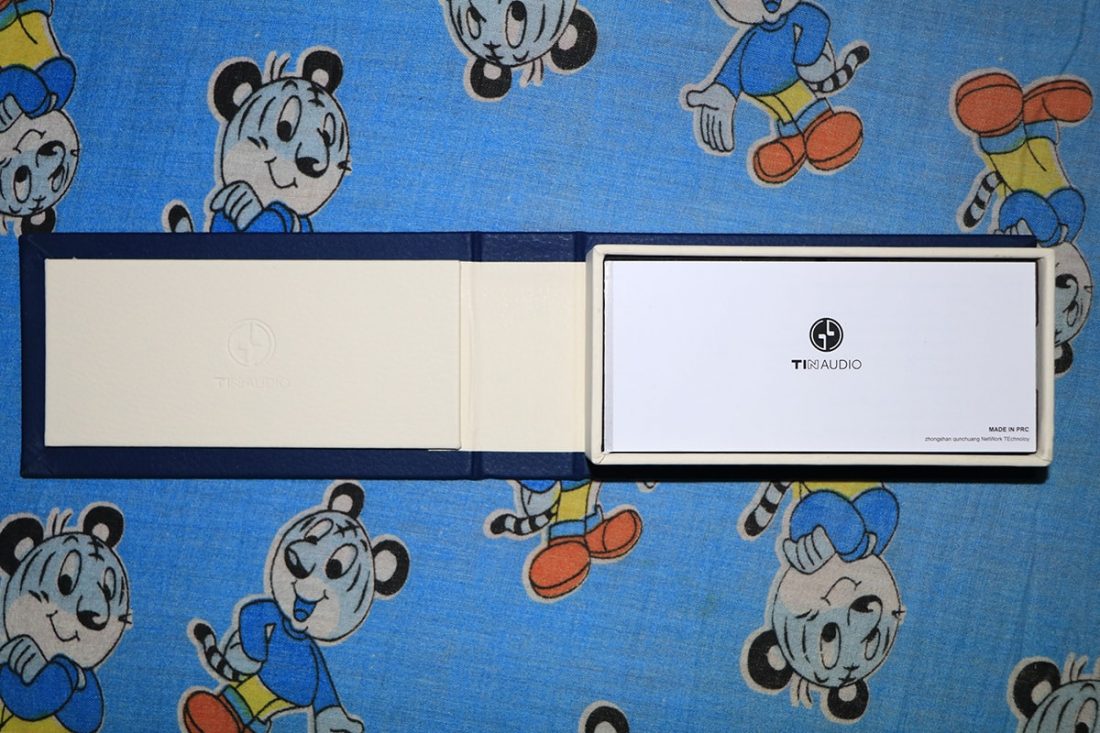 Upon opening the box, you will be greeted by the manual and the earphones underneath it

So, to summarise, here is the list of all the accessories it comes with:

So, the packaging is really good for a $30 pair of earphones and there is nothing more than a person can expect at this price point.

The Tin Audio T1 is built very well. I don’t know if you knew this but the design of the IEM has been heavily inspired by the Dita Audio Answer IEM. Even their y-split looks exactly like theirs! The body of T1 is fully made of aluminum and feels really sturdy.

The microphone is also made of aluminum and the buttons have a nice click in them. But there is a major issue with the mic on my review unit. Whenever I receive a call on my phone and I try to use the mic on these earphones, there is continuous clicking noise which is not solved unless the earphones are removed from the phones. I have tried these with multiple phones with the same result. But this issue is probably isolated to my own unit and since this issue doesn’t affect with the sound quality, I am going to let this pass.

The build quality is very good for its price point.

The cable below the y-split is quite relatively thin and is prone to getting kinks. The y-split is made of stainless steel and it feels quite good in the hand. The 3.5mm headphone jack is gold plated to prevent corrosion and the jacket is made of metal to protect it from physical wear and tear. Also, the microphonics on this IEM is basically zero since it is worn over the ear.

So overall, the build quality is quite good at this price.

Believe me when I say this but out of all the earphones I have used and tested, this one has the best fit I have ever got on a universal IEM! It fits snugly into my ears and after a few moments, you won’t even feel them on your ears! But this area varies from people to people, so YMMV. But overall, I am extremely impressed with its fit (I didn’t even have to change the ear tips on it!).

Now, since I got a near perfect fit on these earphones, needless to say, that the noise isolation was also very good. I would say that if you use it inside a crowded bus at 30-40% volume, then you shouldn’t be able to hear any outside noise whatsoever. I think it provides about 15-16 dB of isolation. So, its noise isolation is very good (at least for me).

Now, the thing you have all been waiting for: its sound quality. The earphones have very natural and balanced sound signature, unlike the RHA MA390u which was inherently a bassy earphones and was good for only EDM and pop tracks. But the T1 will perform equally in all kinds of genres, making it much more versatile of the two.

Now, the sound signature on this pair of earphones is more or less flat. This means that none of the frequency is given more priority than the other. The bass in this IEM is very clean and tight. There is enough bass to satisfy most audiophiles, but bass heads should look elsewhere. It is well-bodied and has a good impact, punch, and quantity, but not as much as the RHA MA390u (which is a good thing).

This is the frequency which can make or break an IEM. The bass is overall very controlled and never sounds bloated or boomy. Hence, it really complements the other sound frequencies without ruining the song itself.

The mids sound more forward in this IEM because of its flat sound signature. But it is in no way lifeless like some other IEMs I have used with such a sound signature. I have listened to quite a few tracks on it and the vocals have a punch in them which I quite like.

The mids are quite forward on this IEM and you will not have any problems with the vocals.

The male and female vocals are given equal preference and hence, neither of them sounds more forward than the other. The separation between the vocals and the instruments is also good in this IEM (at least it is better than the MA390u in my opinion) and they hardly get muddled up except for very busy tracks.

Now, for testing the treble, I have listened to Beethoven’s Fifth Symphony and Trans-Siberian Orchestra extensively as their tracks have quite a lot of instruments in them which makes them very busy tracks and cheaper IEMs have a hard time being able to distinguish among all the notes being played in the track and render them correctly. But surprisingly, the T1 was able to handle them relatively good when compared with some other IEM at this price point.

In the track “Symphony No. 5 in C minor”, the T1 was able to separate most of the instruments out properly except for some minute details. The trumpet renditions are also very good on this IEM. In tracks like Ed Sheeran’s “I See Fire”, the guitar sounds lively and natural with a solid weight in it. Overall, the treble is very good on the T1 for its price.

Now, since the sound profile of this IEM is mostly flat, naturally the soundstage of the T1 is wider than most IEMs at this price point. I would say it is about 30% wider than the RHA MA390u but not as wide as the VE Monk+ (which is an earbud, so naturally it’s soundstage will be wider). The soundstage on the T1 is dome-shaped and the positioning of the instruments is also very good.

Now previously, I said that I have used albums like Beethoven’s “Fifth Symphony” and “Trans-Siberian Orchestra’ to test its treble. I have also used the same tracks to test the ability of the IEM to be able to separate the different types of instruments that are being played in the track. After listening to those tracks for quite a while on the T1, I felt that the T1 retains its grip on these busy tracks much better than the MA390u! Earlier, when I reviewed the MA390u, some of those busy tracks I listened felt congested on it. But the T1 managed to play the same tracks reasonably well!

The earphones can be easily driven out of most smartphones as it is very efficient at an impedance rating of only 16Ω and a sensitivity rating of 102dB. I have driven it out of my iPod Touch 6G and it ran perfectly without any issues. So, I don’t think that drivability should be a concern when you are purchasing these earphones.

This comparison is going to be interesting. This is because the VE Monk+ basically destroyed the RHA MA390u when I last compared it between them. The fun fact is that the T1 and the Monk+ have a very comparable sound signature, so the comparison is justified. So here goes!

Now, here I’ll be making the comparison a bit easier to read by indicating the superior earphone/earbuds with “<” or “>” or “=” (when they’re equal). So here we go!

So, as you can see, the Tin Audio T1 is very good for its price and is even better than the VE Monk+ which although costs only $5, it still is a force to be reckoned with.

At $36, these earphones are as good as they can be at this price point. Honestly, there is a lot of competition at this price point because most of the consumers are looking for earphones under $50 and if that is the case, then do not hesitate to pick these up. These are definitely worth your time and money.

If you like bass or you are a true basshead, then these pair of earphones are not your cup of tea. But otherwise, these truly excel in every department at the price it is pitched and I will highly recommend you to pick one up.