A portable DAC/amp with sound quality that rivals my go-to DAP.

I purchased the Luxury and Precision W2 from Musicteck. Thank you to Musicteck for shipping out the W2 to me quickly.

I had a fateful encounter with the Luxury and Precision W2 in March 2021. I was looking for a capable DAP that would surpass the HiBy R6 Pro, and after asking questions related to my upgrade, I encountered the W2. 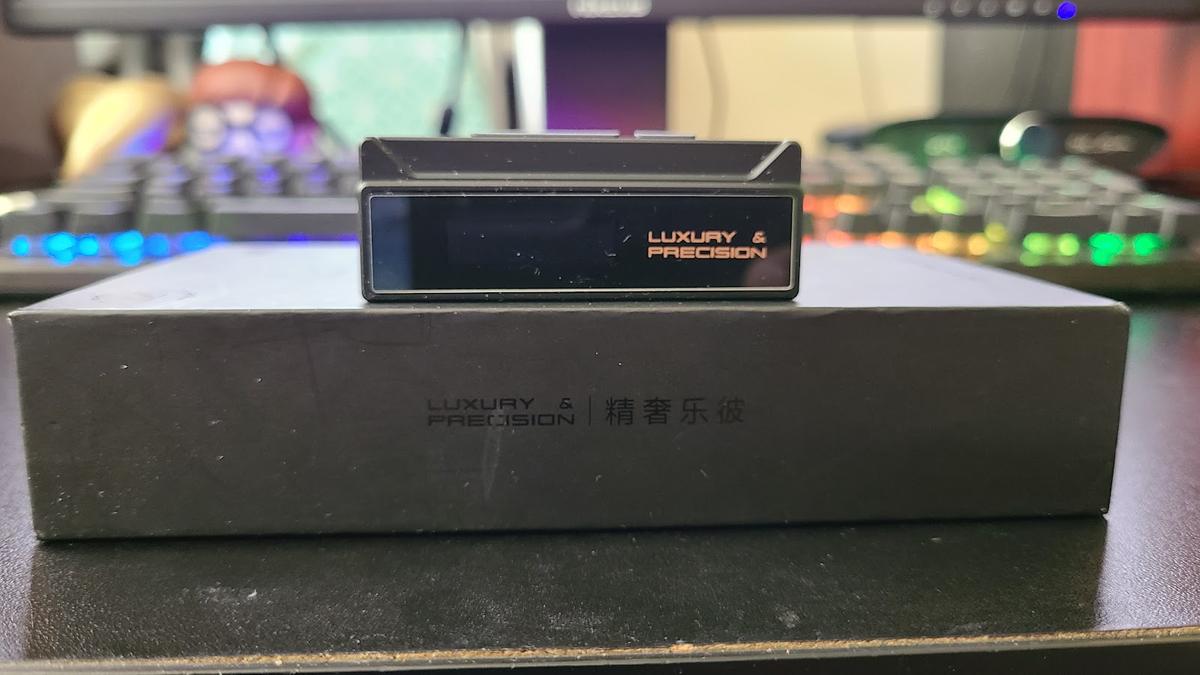 The W2 and R6 Pro have a similar sound signature, despite having different internals. What the W2 lacks power, it makes up in refinement. It’s pretty impressive that a USB dongle can keep up with a powerful DAP like the R6 Pro. However, in the end, the W2’s shortcomings prevent it from getting a perfect score. The W2's imperfections range from minor EMI issues, becoming hot during warm weather, lack of output power, and USB connection issues.

I was curious about what the W2 was capable of and looked into what DAC chips it utilized. I couldn’t believe my eyes. The W2 uses Cirrus Logic dual CS43198 flagship DAC’s!?! Although I was looking for a DAP, and the W2 is a portable DAC/amp, I was more than surprised when I heard its sonic performance.

Initially, I couldn’t find any information on Luxury and Precision as the company doesn’t have an official website. However, a head-fier by the name bluestorm1992 told me a summary of the co-founder of the business.

The co-founder of Luxury and Precision, Mr.Wan, once worked with AMD in China as a GPU product manager. Then he moved onto Colorfly to lead the audio and hi-fi department.

He oversaw the development of the Colorfly C4 DAP. Then in 2014, he co-founded Luxury and Precision and is still their leader in DAP development.

The Luxury & Precision W2 comes with all of the accessories you need for your modern smartphones.

The W2 comes with a USB-C and Lightning USB cable. Both cables are male-to-male. The cables look very plain and they seem to have sub-par durability.

I do have one major gripe about the USB-C to USB-C cable; after using it for some time, the connection became unstable. It became difficult to maintain a proper connection for extended periods.

One of the most attractive qualities of the W2 is the design. Not only is the W2 sleek and smooth, but it also has a beautiful carbon fiber back. In addition, the chassis feels very solid and looks quite rugged. The Luxury and Precision logo is a nice touch on the carbon fiber, while the W2 logo is found in golden print on the front.

Speaking of the sun, the W2 has a design issue that presents itself during a warm and sunny day. What I mean is the W2 heats up too much. I have to be honest, this makes me nervous about the longevity of the W2, and why I’d rather use the W2 indoors where it’s cooler.

Another one of the W2’s design issues is susceptibility to EMI. Whenever I place my W2 near my Samsung Galaxy S20 or R6 Pro, I hear audible distortion related to surrounding electromagnetic signals. Thankfully this issue is small, but it’s still annoying.

The W2’s buttons are only used to turn on the screen, adjust the volume, and change the settings.

Double-clicking the screen-on button (small button) is used to access the W2’s EQ modes and filters. The W2’s volume buttons can be used to adjust the volume and change the W2’s settings.

Android or iOS volume playback can be bypassed through the W2 by turning the HID key on.

The S20 is capable of plug-and-play, but not when paired with the R6 Pro. First, I had to enable USB Debugging through the developers settings on my R6 Pro. Then it worked without any glitches.

The W2’s UI is clean and organized. The volume, gain, audio format, and bitrate are all visible at the top of the OLED screen. When turning on the screen, you’ll see the current EQ profile (Normal, Classical, Jazz, Rock, Pop, Bass, Movie, and Game).

The Luxury and Precision W2 is rocking Cirrus Logic dual flagship CS43198 DAC chips. These DACs are superior to most smartphone DACs. Unfortunately, I scoured the internet to find nothing about the W2’s internal amps.

The enchanting sonic splendor brings me back to the W2 every time. I paired the W2 with the Unique Melody 3DT and Ultrasone Signature Studio and encountered a few distinct differences between the two.

There’s an explanation of these differences found in the comparison section.

The bass is deep, clean, tight, and fast. I find it quite remarkable that the fast seems relatively transient. The W2 paired with the 3DT presented nimble bass. It was the fastest I’ve ever heard, but this speed came with a price. I immediately noticed that the W2 became less suitable for bass-heavy soundtracks. The diminished bass quantity and lighter impact stem from the bass’s transient nature.

The first thought that struck me was the tighter pulsing bass and quick impact in the background. I noticed this quality while listening to “Hardwire. At the same time, the W2 retained the rich bass tones that I’ve come to love.

As a result, the W2 provided a slight improvement in bass quality compared to the R6 Pro. I have elaborated more on their comparisons below.

The mids are clean and neutral, but do sound intimate. That’s not a bad thing. The W2 is capable of excellent clarity and imaging throughout the entire frequency. Not only is the sound clear, but it’s also quite transparent too.

I couldn’t believe the transparency from the W2. It gave my 3DT and Signature Studio a proper clean-up. The 3DT sounds refined and crystal clear, yet the vocals and instruments are intimate. For example, when I listened to “Star Sky,” the intimacy of the vocals helped with hearing the pronunciation of the lyrics from the background.

The treble is relatively tame and in no way edgy and piercing. Instead, it’s smooth and pleasing, with a good amount of shimmer in the lower region. The greatest strength of the treble is the neutral treble response. It’s almost as if it’s reference-like, which provides good string and percussion performance.

The performance from The Rippingtons “Black Diamond” seems to be a perfect match for the W2. The guitars and percussion do not have an overbearing presence, but instead, they modestly shimmer. Overall, the W2 demonstrates excellent treble control but could use a bit more upper treble presence.

The R6 Pro is the only device I can compare with the W2, despite the R6 Pro having more than just amp and DAC chips inside. While the W2 sports dual CS43198 DACs, the R6 Pro utilizes dual Sabre ES9028Q2M DACs with SSM6322*2 LPF and amplifier. Once again, I need to state that I do not have information on the W2’s internal amps.

What separates the W2 from the R6 Pro is the raw power between them. While the W2 has an output power of 125mw @32Ω for 3.5mm, the R6 Pro has an output power of [email protected]Ω for the same connection. Thus, the power output from the single-ended connection of the W2 makes it easy to capture the true performance of the UM 3DT. Unfortunately, the W2 can’t capture the true performance of the Ultrasone Signature Studio.

The R6 Pro DAP demonstrates fast bass, but in comparison to the W2, it seems a touch sluggish. That’s due to the larger impact and slower attack/decay from the R6 Pro. It becomes obvious when powering full-sized headphones, such as the Ultrasone Signature Studio.

The W2’s mids are as neutral as the R6 Pro, but it takes on a more clean presentation. Not only that, the W2 provides better accuracy than the R6 Pro. So much so that it’s pretty noticeable by using the 3.5mm output from the W2. The 4.4mm connection takes it even further with better instrument separation and stage width.

The W2’s treble is slightly more detailed than the R6 Pro. However, the better extension falls in the court of the R6 Pro. At this point, the W2 has slight technical superiority, but the R6 Pro has more power, which uses that to its advantage for a more airy and open presentation.

What a showdown! The W2 and R6 Pro have a similar sound signature, despite having different internals. What the W2 lacks power, it makes up in refinement. It’s pretty impressive that a USB dongle can keep up with a powerful DAP like the R6 Pro.

However, in the end, the W2’s shortcomings prevent it from getting a perfect score. The W2’s imperfections range from minor EMI issues, becoming hot during warm weather, lack of output power, and USB connection issues.

The W2 has great sound quality, low distortion, and it’s perfect for smartphones. Unfortunately, it won’t scratch that itch for those who seek to replace their DAPs completely.

I still can’t believe that I’d see the day that a USB dongle has similar audio performance to a DAP that costs twice as much. Sonically, the W2 is a winner.