1MORE attempts to show that the time of wired portable headphones isn’t yet over, and that sometimes good is good enough to be pretty great.

Thank you to Alexander of 1MORE for providing the Triple Driver Over-Ear headphones for review purposes.

What does the lovechild of the Sennheiser HD820 headphones and a couple of rose-gold Maserati rims look like?

Yup. You guessed it. Meet the 1MORE Triple Driver Over-Ear headphones with their new pinkish hue.

The original titanium-colored Triple Driver Over-Ear headphones were released several years ago to much critical acclaim. A recent partnering of 1MORE and Drop has meant a refresh for this classic set. Beyond the color change, the driver coating has morphed from titanium to graphene, and the cable has been updated to include an inline remote. 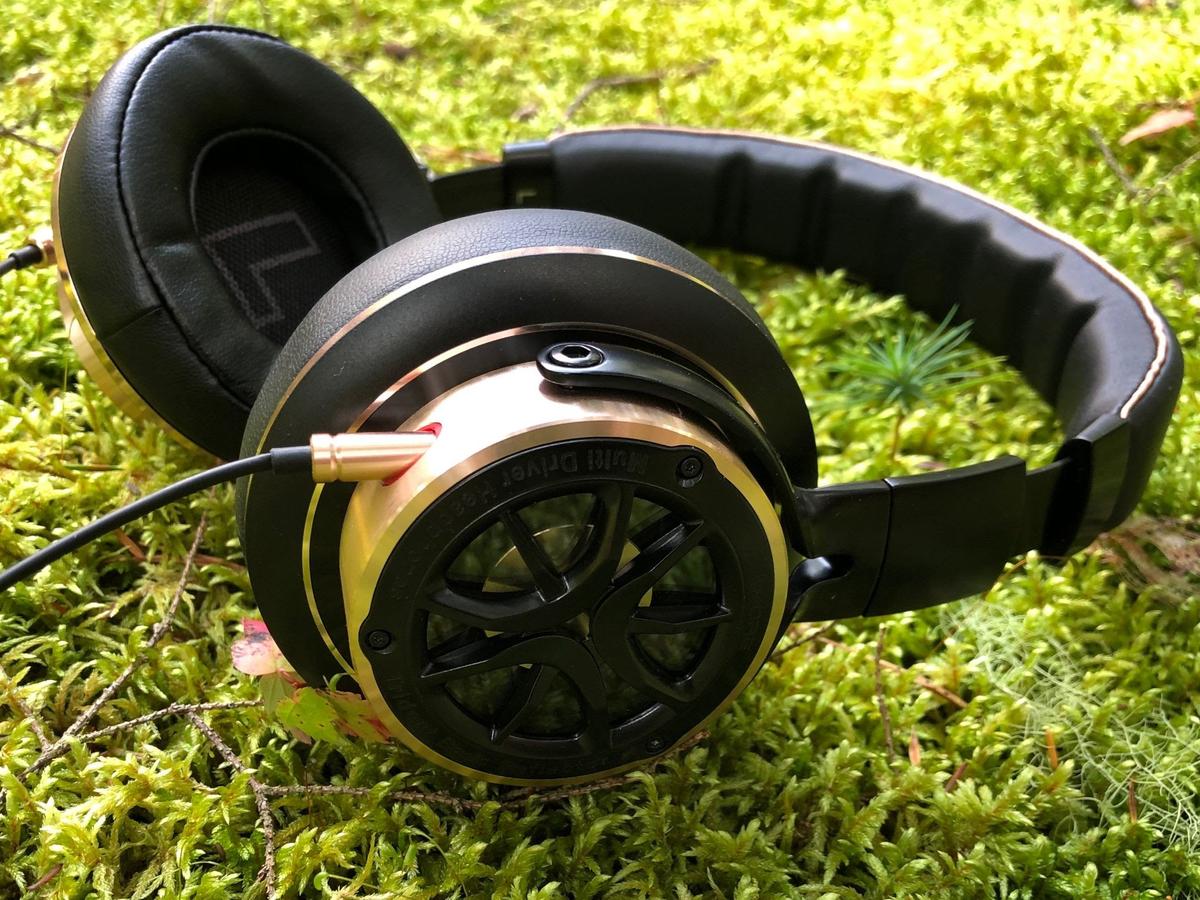 Sub-USD$200 means the Triple Driver OE are a real value contender. They do very many things right. High-quality materials and construction, light weight, decent comfort, included travel case, and a fun, non-fatiguing sound that is bigger than their diminutive size (and price) would imply. There is a lot to like in this small package.

Available at Official Website
Available at Amazon
What We Like
What We Don't Like
1MORE makes life rather difficult with the rather unwieldy name (Triple Driver Over-Ear headphones), likely intended to differentiate these from the Triple Driver IEMs that they also offer. I’ll be shortening the name for purposes of this review to Triple Driver OE.

What we have here is a folding closed-back pair of portable headphones. Over-ear is a bit of a stretch (due to their smallish size), as is the ‘triple’ part of the driver designation (with only two active drivers). The Triple Driver OE feature a ceramic tweeter, a full-range 40mm dynamic driver, and a passive bass reflector in each cup.

Regardless, they do offer a unique proposition in the market. From a company more known for producing traditional IEMs for portable usage, are 1MORE’s Triple Driver OE relevant in 2021? Do people still want a portable pair of wired headphones? Are they convenient enough, sound good enough, and tough enough for everyday use?

The Shenzhen-based company 1MORE was founded in 2013 by three former Foxconn executives, on the principle that music lovers “…deserve to hear music as it was meant to be heard, as the artist intended it to be heard.” 1MORE’s investors include Xiaomi, venture capital firm GGV Capital, and Singapore sovereign wealth fund GIC Private Ltd.

“1MORE is the most awarded headphone brand two-years running.” – 1MORE

1MORE is hella-good at making boxes. Just like with their IEMs, the Triple Driver OE come in a classy outer sleeve that, once removed, reveals a magnetically closed, book-style inner box. On the interior fold-out cover you will find several Davinci-blueprint-style sketches of the headphones.

The included zippered hard-shell case is very functional; it is small enough to tuck into a bag but tough enough to actually provide protection. One side of the interior is molded to fit the headphones when folded and the other side has a small mesh pocket that is attached with Velcro, and a Velcro loop tab to hold the cable.

Additionally, there is a stretchy black fabric storage bag, cinched at the top, with the 1MORE logo on the front.

From the pinkish-hued, 3.5mm TRRS source jack to the y-split, the OFC cable is covered in Kevlar-reinforced black paracord with flecks of matching rose-gold in the material. The cables to the dual 2.5mm TRS cup jacks are sheathed in soft black rubber with the right one containing a 3-button inline microphone metal remote near the end.

The first-generation Triple Driver OE headphones did not have an inline remote on the cable.

The cable has near-perfect functionally, as it exhibits little unwanted cable noise, and is tough, slim, and doesn’t tangle.

The Triple Driver OE are definitely unique looking. A sports-car wheel-inspired grill over a clear window displays the passive bass reflector within. The window means that they are closed-back in design, although they appear to be open.

The aluminum and plastic construction feels very sturdy and they can be manipulated with nary a creak or unwanted flex. The headband is wrapped in soft black faux leather, trimmed in rose-gold to match the metal bits. The earcups extend on the metal headband with a positive feeling click at each stop. Of note, the aluminum-sided cups have a textured finish and resist fingerprints. The cups can swing about 45 degrees and both fold up towards the band.

Comfort is acceptable, with padding more on the minimal side of things, rather than feeling particularly luxurious. The band padding is quite thin, but the black protein leather ear pads are filled with very soft memory foam. This makes them easily compressible, and since they are rather shallow, those with more prominent ears may find the interior space a bit tight.

The ear pads appear to be glued on and may be damaged if you attempt to change or remove them.

Long listening sessions result in a few hot spots from the band and somewhat sweaty ears due to the non-breathable ear pads. There are ten small vent holes in a diamond-shaped pattern on the front interior of the pads, but these don’t seem to add to air movement. Overall comfort remains adequate, likely due to their light weight (<300g) and relatively minimal clamping force.

Triple driver, eh? The first version of these headphones came out several years ago, and yet we still see very few hybrid full-sized headphones. Undoubtedly, that should tell us something.

Hybrids are hard to get right. Especially those falling on the ‘affordable’ side of the pricing structure.

With this refresh of the Triple Driver OE, 1MORE opted for a graphene coating on the mylar driver, replacing the old version’s titanium layer. The passive bass reflector and ceramic tweeter appear to have remained the same. The 40mm driver sits between the tweeter and bass reflector, with the tweeter positioned nearest the ear. The idea is that the tweeter will extend the high-frequency response, while the bass reflector further deepens the low-end extension.

With an impedance of 32 Ohms, a sensitivity of 104d B, and a maximum input power of 50 mW, the Triple Driver OE are suitable for portable usage, working fine connected directly to a phone. They can also be effortlessly powered by most portable DAC/amp dongles.

Read in detail how I made out with the Triple Driver OE paired with the Audirect Atom 2 and Hidizs S9 Pro portable DAC/amplifiers.

Grammy award-winning audio engineer Luca Bignardi was once more tapped to bring his vast experience to tune the sound of these headphones. As per the other 1MORE offerings I’ve experienced, the sound profile tends towards energetic and fun rather than studio neutral. The soundstage impression is quite spacious for a pair of closed-back cans, and they do well at avoiding a claustrophobic or boxy sound signature.

Passive sound isolation is decent as well, considering that these are much more of the ‘on-’ rather than ‘over-’ ear style which often does a better job at blocking exterior noise.

The overall impression is of solid and accurate bass, with a clean midrange vocal response, and a controlled high end. These aren’t bass cannons without adding EQ, but there is plenty of low-end presence enhancing their musicality. For their reasonable price tag, the Triple Driver OE deliver a whole lot of clarity and clean musical goodness. Good fun all around.

Overall cohesion is surprisingly good, especially as this is where hybrid designs can fall apart. The transitions and sonic handoffs between the drivers are mostly seamless and if 1MORE didn’t quite so prominently proclaim the triple driver construction, it’s likely most listeners would never suspect their unique composition.

I spent the majority of my listening time on the go with the Hidizs S9 Pro plugged into my iPhone, and desktop listing using the Soncoz LA-QXD1 DAC and SGA1 amplifier.

The combo of the Trident Bass Reflector and the graphene-coated driver deliver a fast, clean low-end. There is no sloppy boom or bloat, but there is power and punch in spades. It all stays under control, even though it’s clearly boosted in the mix.

There’s more mid-bass thump than sub-bass rumble, and that helps to keep things tight. While these are by no means reference-grade headphones, at their general price point, they really perform surprisingly well. They aren’t the final word in refinement but manage to sound very good.

Bass notes are clearly discernible and don’t blur or bleed up into the midrange. The Triple Driver OE follow that old adage of ‘a place for everything and everything in its place.’

The separation between the low-end and midrange yields a sound that is more focused on clarity than warmth. Detail is quite good for a pair of headphones in this range, although they’re still more ‘fun’ than ‘accurate’. The Triple Driver OE are certainly not perfectly neutral or sterile sounding, and voices give a good impression of body and presence.

Instrument and vocal separation are more than acceptable, and lyrics are clearly articulate and distinct. I’ve come to expect this sort of sound from Luca’s creations, and it has a flavor that I quite enjoy.

Treble is present but relatively tame. For those worried that the addition of the ceramic tweeter may artificially boost the treble response to shrill levels can take a calming breath and relax. This is certainly not the case with the Triple Driver OE. The ceramic driver takes over after about 10kHz and it does so quite seamlessly, adding a bit of airiness, without excessive brilliance.

This all adds up to a pair of headphones that are quite easy to listen to for long sessions. While certainly not veiled or blurred, the vocal-centric sound is unfatiguing and not overly energetic. As always, the success of this sort of trade-off depends on the listener’s individual preferences. Those wanting the highest level of sparkle and sweetness may be somewhat put off by the Triple Driver’s tuning, but they deliver a truly comfortable and enjoyable listening experience.

High-quality wired portable headphones are becoming something fairly rare in today’s saturated market comprised mainly of IEMs and Bluetooth tech wonders. Perhaps the Triple Driver Over-Ear headphones made more sense a few years ago when they debuted. So, when 1MORE decided to refresh the Triple Driver OE, it’s a bit surprising that a change of driver material, color palette, and in-line cable remote was the direction they headed.

While in today’s portable landscape, the Triple Driver OE may struggle a bit for relevance, it would be a real shame to dismiss them.

The new lower price point offered in the Drop collaboration makes them extremely attractive. Sub-USD$200 means the Triple Driver OE are a real value contender. They do very many things right. High-quality materials and construction, light weight, decent comfort, included travel case, and a fun, non-fatiguing sound that is bigger than their diminutive size (and price) would imply.

There is a lot to like in this small package.