We review the Razer Kraken 7.1 V2 to see if they still deserve the reputation they earned over the past 5 years.

We bought the Razer Kraken 7.1 V2 for the purpose of this review.

As the video game market rapidly grows and continues to make new leaps and bounds, gaming gear companies need to keep up with the new industry standard. That’s why gaming headphones manufacturers constantly push its competition to offer the best sound, comfort, and functionality with new lines of gaming headphones.

Every year, a new standard is set, and old pairs of gaming headphones are dropping off. Despite this ongoing race, one company continually proves its headphones’ lasting performance — Razer, especially with its Razer Kraken Series.

Out of the whole series, the Razer Kraken 7.1 V2, commonly used by professional gamers, YouTubers, and streamers, grew the most in popularity. But since these were released way back in 2016, a few questions remain: Can they compete with new gaming headphones? How do they fare with the audio quality of video games today? And do they deserve its high reputation?

Read on as we answer these questions. 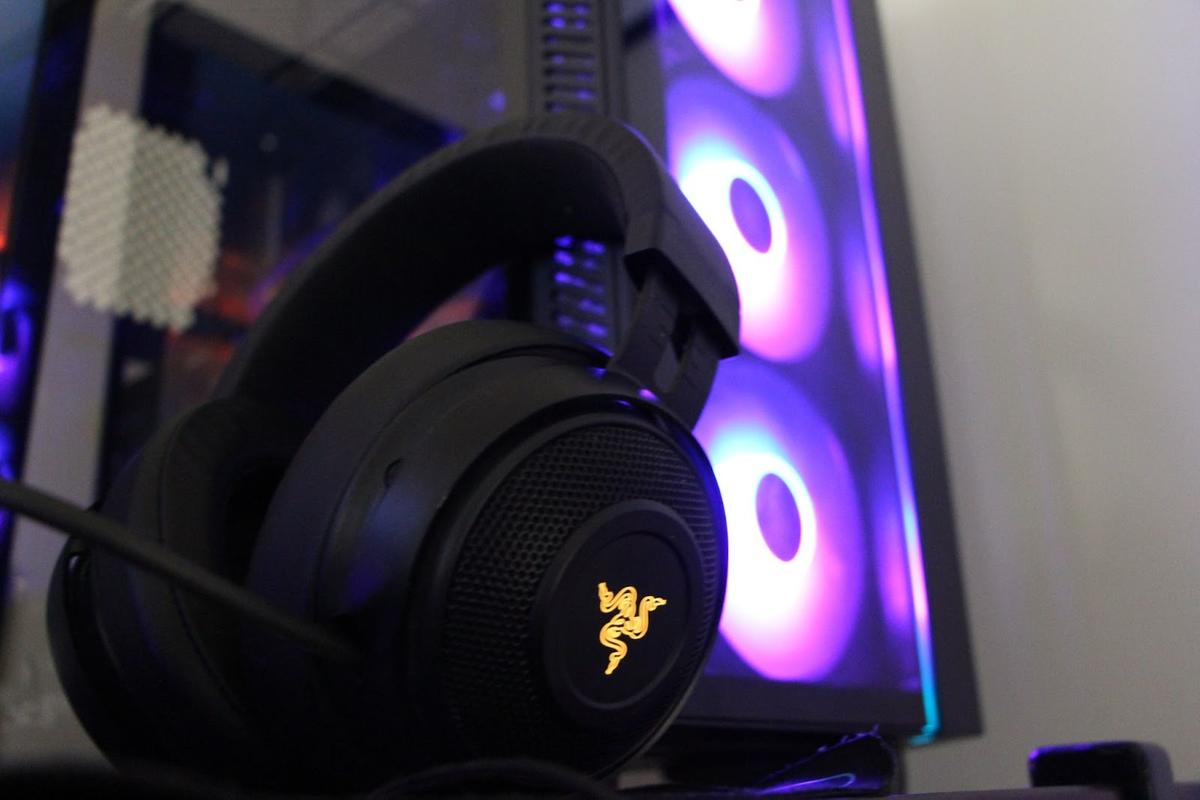 While Razer aims for perfection, the Razer Kraken 7.1 V2 still have some work to do. Sure, the built-in surround sound gives an immersive experience, and the durability and design prove to last for years. However, users can benefit from more adjustability and breathability. The boosted bass also makes in-game chat hard to hear above game sounds like gunshots and explosions.

Razer is a Singaporean-American technology company founded in 1998 by Robert Krakoff and Min-Liang Tan. It’s well known in the technology industry for producing hardware; sticking to its tagline: “For Gamers, by Gamers”.

Razer is a pioneer in the gaming industry since establishing its legendary gaming mouse, the Razer Boomslang. This revolutionary gaming mouse put the company on the map, and it wasn’t long after they branched out and made its notable keyboard, the Razer Blackwidow.

The Razer logo is based on the
South African Boomslang snake, known for its green color.

Razer again set the standard for innovation with its first pair of gaming headphones with True 7.1 Surround Sound, the Razer Tiamat. From then on, Razer released a variety of gaming gears and proved its dedication to improving sound technology with the acquisition of the THX Ltd. in 2016.

At first glance, the Razer Kraken 7.1 V2 appears to be clean but a bit bulky, especially with the large, puffy ear cups. Despite this, the headset feels light and the ear pads are very comfortable.

The ear cups are advertised to have good noise-isolation. However, they only provide up to a 40% noise reduction.

Unfortunately, the wired USB cable only reaches 6.56 feet. As a result, I found that it limits where I could sit when gaming on a console. I either have to move my console closer to me or position myself at an awkward angle from the TV to avoid stressing the cord.

The microphone is connected to the left ear cup, which extends up to 13cm and can be tucked away when not used. It’s also made to be flexible and freely movable. Plus, it can also be easily muted by pressing down on the microphone head. It also has a nifty feature that makes the mic light up red when muted. This way, you won’t forget whether you’re muted or not.

The mic’s flexibility and easy mute features are great additions to the design. As a gamer, I find this extremely helpful, especially when I had to suddenly go AFK to communicate with other people outside the game.

What makes the headphones really stand out is the RGB (Red, Gold, Blue) LED Razer logo. They’re located on the side of both the ear cups and will automatically cycle through colors when turned on. Moreover, if that’s not your style, you can easily customize these lights via the Razer Synapse 2.0 software. I found this feature useful for configuring the headphones to match my personal color preferences.

The headphones are offered in three distinct colors of black, green, and white. The ear cups, headband, and microphone match the base color, while the ear pads and metal trim on the outside of the ear cups are black. All colors come across as professional and are very appealing.

Overall, the Kraken 7.1 V2 do maintain a nice presence, are very modest, and achieve the simplicity Razer set out for

While the adjustable headband is strong and durable, it only offers around 4cm extension on each side, which isn’t much. Players who enjoy wearing a hat or beanie with their gaming headphones will most likely find this to be inconvenient. Plus, this can make the headphones uncomfortable for people with larger heads than average.

Also, while the padding feels smooth, the headband sometimes starts pressing on the top of my head after a while. I have to slightly readjust the headphones once in a while to feel cozy again.

Also, the ear cups aren’t very breathable. They may be great when gaming in an airconditioned room but aren’t advisable to use for long periods at room temperature. Despite all this, the ear cups do fit snugly, feel smooth and fluffy, and don’t squish any part of my ears.

As far as the quality goes, I found the headband to be very durable and showed flexible resistance when stretched out and extended. This showed that the headphones’ headband isn’t cheap plastic and should support long use.

I’ve actually had these headphones for five years now and didn’t even experience any major issues when it comes to durability.

Except, perhaps, with the connected USB cable. The cord curls up and tangles over time and needs to be unwound again and again. This may not appear to be a pressing issue, but at times can tend to get in the way and cause frustration.

It would be beneficial to see more length in both the USB cable and in the headband.. Other than that, these headphones are straightforward and, as far as I’m concerned, operate as a pretty durable pair of headphones.

These headphones can connect to any device that features a USB port and supports a gaming headset. USB is the only connection option, meaning they can’t be used for mobile phones or other handheld devices like Switch. If you are looking at using the Kraken 7.1 V2 with mobile devices you will need to purchase a 3.5mm jack adapter.

Unfortunately, when the gold plated USB is first connected, the headphones tend to give a loud audio feedback noise. This should definitely be noted if your volume is all the way up on first use. It can be quite disturbing and has caught me off guard many times.

The microphone on the Kraken 7.1 V2 performs quite well. When the microphone is placed at around 50mm from my mouth, my voice comes across clear and doesn’t sound muffled. However, the same cannot be said when positioning the mic close to your mouth: sounds can come across as fuzzy or muffled.

On the other hand, the mic doesn’t echo any mechanical clicking from the keyboard and mouse. It also handles background audio well, since it doesn’t pick up sound from the TV or in the area.

This is all good, except when there is loud noise within arm’s reach of the mic. It will distort the outside noise with your voice and can be very disturbing to your teammates. Here are two microphone recordings I took, in which you can see how the Razer Krakens 7.1 V2 distorts my voice with close ambient noise.

All in all, I think the headphones’ mic still functions well, despite the age of this model. This is still a very good option, especially if you only plan on gaming at home.

Without a doubt, the most important feature for gamers next to comfort should be sound quality. With games putting more importance on sounds and audio tracks to improve immersion, gaming headphones need to be able to match this level of quality. Esports players around the world use Razer because of this level of quality.

Razer is a significant figure in the esports world and they even own a number of teams that compete competitively. Alliance, Beyond Gaming, Copenhagen Flames, Ninjas in Pyjamas, and Mousesports are just a few of the most notable teams that make up Team Razer.

While the Kraken 7.1 V2 offers a competitive sound, there are some very important factors to note regarding the 7.1 virtual surround sound and the implemented boosted bass. Let’s discuss them below:

There is a lot to cover in aspects of sound with the Kraken 7.1 V2, but we’ll start with the most important factor: the built-in virtual surround sound. When testing the Kraken 7.1 V2 with Counter-Strike: Global Offensive, Call of Duty Modern Warfare, and Apex Legends, the headphones proved worthy.

With all these titles, sound direction is crucial to depict where an enemy might be, or when someone is pushing you. For this purpose, the Kraken 7.1 V2 surround sound proves reliable and gives a clear sense of where each sound comes from. The audio cues are sharp and accurate in detecting movement and gunfire. Even reload sounds are audibly clear.

The Kraken 7.1 V2 are known for its boosted bass, which still offers some of the best lows even when compared to current gaming headphones. The Razer Synapse 2.0 software allows you to adjust the lows or turn off the boosted bass. Unfortunately, this option isn’t available for the mids or high frequencies.

And while the surround sound clearly improves the immersion in these games, the boosted bass tends to conceal sounds at times. Grenade, gunfires, or any explosions, masks other sounds, and at times is costly. In these moments, game-chat becomes hard to hear and it is a battle to communicate with teammates.

When playing games with a heavy emphasis on the soundtrack, the sub-bass assists with the immersion in the music and atmosphere. Because of this, I didn’t want to adjust the lows but needed to in order to make the mids and highs sound clearer. Adjustable midrange and treble definitely needs to be a feature implemented to combat the strong sub-bass in the Kraken 7.1 V2.

While Razer aims for perfection, the Razer Kraken 7.1 V2 still have some work to do. Sure, they are simple to use and have sleek, comfortable design. However, I do wish for more functionality out of these headphones, especially with the wired USB and headband extension — both of which could be longer.

Yet, one aspect where the Kraken 7.1 V2 proves above average was the padding quality. I can’t get over how smooth, and fluffy the headband and ear cup paddings feel, despite some other issues in adjustability and breathability.

In aspects of gaming performance, the built-in surround sound can be relied on and will definitely come in handy in those clutch moments. The downside to this is the boosted bass, which made in-game chat hard to hear above loud bass sounds like gunshots and explosions. While it can be adjusted and even turned off, the natural bass response of the headphones are still quite heavy and definitely need improvement.

Despite the issues, I still think the Kraken 7.1 V2 deserves the reputation they have earned over the years. They are a simple and durable pair of headphones that can be relied on. After all, I’ve had this pair for five years already and still have them as my number 1 go-to.