The K400, along with their predecessors, have become the stuff of legend for their wide soundstage and natural presentation. But is their reputation deserved?

Some years ago, when I first became a “headphone nut,” the first pair of truly mid-fi headphones that I purchased were the AKG K712. I had heard of their reputation for an expansive soundstage and a swirling, psychedelic, creamy sound, and I immediately found that the rumors were true. At least to me as a new audiophile, the soundstage was large, and the sound was amazing!

I had to know more! I ravaged the internet forums looking for more information on AKG. The more I discovered, the more esoteric the company seemed. The K240 Sextett, with its six passive resonators. The K1000, which seems like something out of a cheesy sci-fi movie.

And the K501, the younger sibling of the K400, which has earned the nickname of “concert-hall headphones” for their vast but well-composed soundstaging ability. Intent on owning a piece of this history, I ponied up the mere USD$100 it took to buy a K400 in my country (European buyers can find them for around half that). 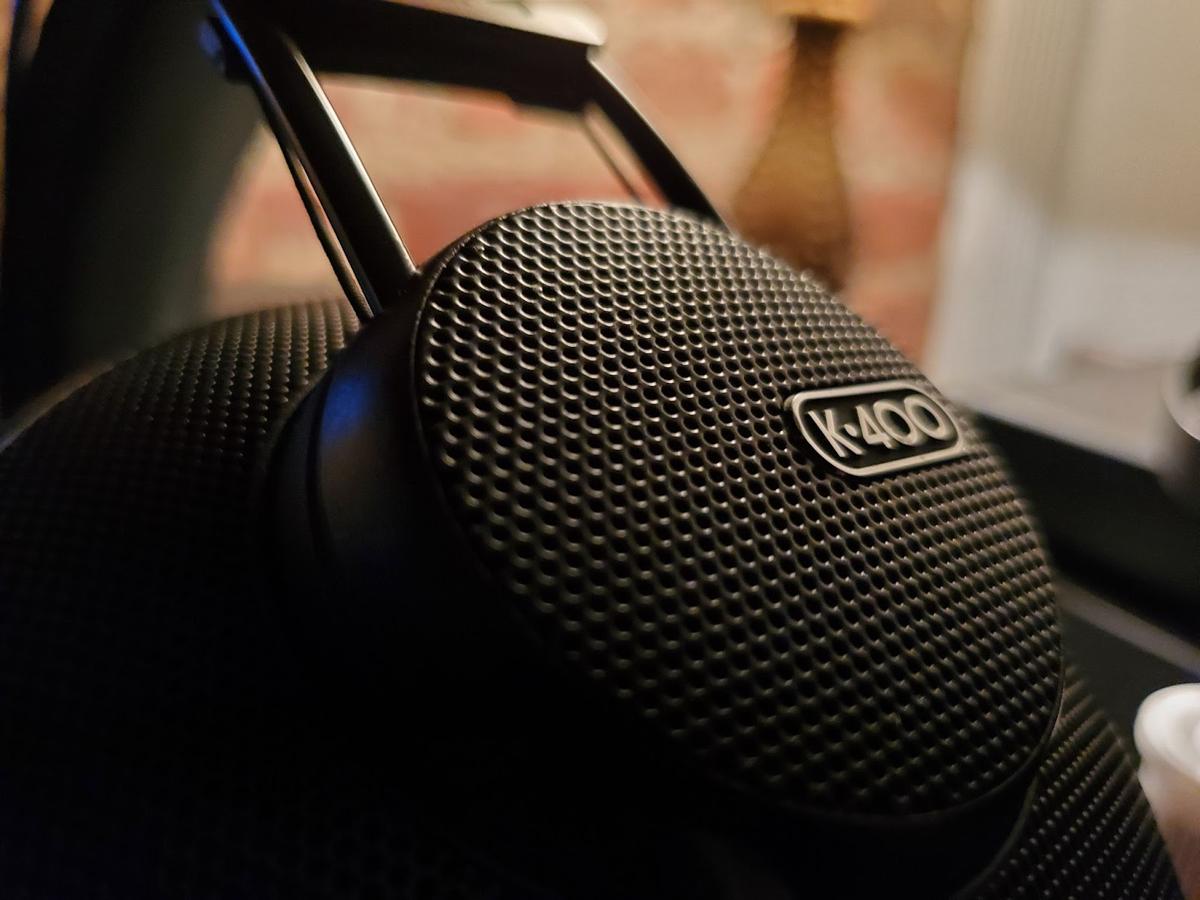 I could never recommend the K400 as a daily-driver headphone. They are far too limited in versatility across genres for that purpose. For most electronic and rock music, the K400 fail due to lack of dynamic impact and bass. The exception to this is if you listen to primarily classical and jazz music, and soundstage is a priority for you.

When discussing the K400, a mention of the K1000 is probably in order. The K1000, released in 1989 and since discontinued, were a pair of floating earspeakers that sat some distance away from the ear to more convincingly imitate the soundfield one would get from speakers.

They immediately became the stuff of legend, and are now one of the most sought-after vintage products. But a pair was, and still is, quite expensive and out of reach for the average consumer. Probably, the K400 (as well as its slightly more premium but mostly identical twin, the K500) were AKG’s way to make a similar experience more accessible.

The K400 were the beginning of it all, so the question remains: how do they hold up?

The AKG K400 are a child of the early ‘90s, and decidedly mid-fi to boot, so it should come as no surprise that the build is pretty much entirely made of plastic. The extremely lightweight feel and slightly loose earcups don’t inspire confidence as far as durability goes.

Still, the proof is in the pudding, and clearly any K400 that has lasted until present day has survived through worse than the average M50x that breaks after a couple months. They may not feel sturdy, but the simple design and lack of tension-bearing parts makes the K400 quite durable indeed.

The one part that tends to wear out is the suspension headband.

Anybody familiar with AKG’s other products knows about this issue. The headband automatically adjusts to the user’s head size because it’s held up with an elastic cord. When you put the headphones on, they naturally sink to the proper level.

The issue, of course, is that the elastic wears out, so any K400 you buy will be likely to sink far beyond the desired level, causing comfort and fit issues. But not to worry, the elastic is easy to replace and there are guides on YouTube on how do it.

The headphones sit quite lightly on the head, though, which should please anyone who finds the mid-fi Sennheiser offerings too clampy.

Overall, I think the K400 are a pair of headphones that use “budget materials” to the maximum possible effect. They look nice, and they feel fine.

So, here are a pair of headphones from 1991 that currently sell, in some parts of the world, for around EUR50. We know from experience that headphones from this era can sound good even by today’s standards. But what about the K400?

In my opinion, the K400 offer some benefits that few other headphones at thier price can provide, but those benefits also come with significant drawbacks.

This is a specialty pair of headphones: they are not for everybody.

What the K400 do offer is a famously wide and shockingly well-composed soundstage. While AKG’s modern headphones, like the K702 and the K712, also offer a large soundstage, they are known for having an issue with central imaging (more on that later!). The K400 have no such problem: the soundstage, while large, is quite realistically shaped.

They also provide an exceptional tonal balance through the midrange that, while somewhat thin and shouty compared to the Sennheiser HD580, represents acoustic instruments and voices – especially in classical music – wonderfully in its own way.

On the flip side, the K400s’ resolution is somewhat poor and even “low-fi” compared to today’s competition. The same could be said of their dynamic ability. I love them despite their flaws, but one can’t claim that their resolving ability is on par with the HD580, for example.

In a way (to borrow an apt photography analogy from Head-Fi user mrAdrian), the appeal of the K400 is somewhat similar to the continuing appeal of film photography amongst amateurs. The picture these headphones present may be slightly grainier than their modern equivalents, but they have their own charm and their own way of presenting the world that modern headphones simply don’t have.

Okay, so, this section will be pretty short because there isn’t much bass to speak of. The bass rolls off early and it rolls off steep. Some measurements – and listening corroborates this – indicate that the bass roll-off begins as high as 100 Hz.

That, no longer cuts the mustard. Modern music, and classical music, is noticeably missing the bottom end. This is partly what lends this review its title of ‘lightweight listening’.

The sound of the K400 is airy and light; punch is noticeably lacking and there is no bass.

So if bass is something you value…steer clear of the K400! But, of course, what bass is there is fairly tight and not at all bloated. It will not distract, at least.

Okay, here’s where things get interesting. The midrange of the K400 is not only high-quality but, reportedly, legendary. Whether it deserves that status is another question.

It’s worth mentioning here that there are multiple versions of the K400 floating around. AKG is notorious for introducing silent revisions into their manufacturing process that have noticeable changes on the sound. While the lack of bass is a universal problem with the K400, it’s entirely possible that there is some variation in midrange tuning between different versions.

While the modern AKGs are known to have a large spike centering on 2 kHz, producing a distinctly “present” and occasionally quite shouty midrange, the AKG K400 do not have this so much as a broad emphasis on the upper midrange in general.

In other words, while the tuning is free of any offending spikes and it favors the upper midrange over the lower. The result is a tone that is broadly realistic but still slightly shouty, thin, or even “papery” (though this is due in large part to the treble – more on that later).

That thin-but-realistic tone, combined with the wide soundstage and the slightly lacking macrodynamics, contribute to what I began to refer to myself as a kind of “no-comment style” – a way of presenting music in a way that emphasizes the whole over the part, giving a kind of “live” feel to the music, as if you’re in a room listening to the music, rather than listening over headphones.

The issue, of course, is that this is not always what the music demands. Many modern recordings, especially, simply sound compressed, thin, and low-res on these headphones. But there’s a reason classical aficionados present this pair of headphones as an example of why they “don’t make ‘em like they used to.”

Some describe the treble as smooth, while others describe it as grainy. I suppose this could be down to variation between units, and if this turned out to be the case, I’d believe it! But my pair definitely skews toward the grainy side.

There’s some emphasis right in the middle of the sibilance region, especially around 6k. This spike is not only the source of some sibilance but also some grain.

But it’s not as bad as it may seem from that description. Even though there might be some grain, there’s a coherence to the treble presentation that’s rarely found among headphones in this price range.

And that’s really the ultimate strength of the K400: even though they may not always be the last word in technical ability, they present a unity of vision that’s rare among many audio products, then and now.

Soundstage is the strong suit of the K400, without a doubt.

While the low resolution sound means the stereo image is slightly vague, its size and shape remain impressive. No one is going to convince you that you’re really in a concert hall, but as someone who’s been to (and played in) plenty of classical concerts, this is pretty much as close as you’re going to get in a pair of over-ear headphones – at least in this price range.

The AKG K400 has been out of production for decades, so going used is your only choice. I recommend checking out the listings on HifiShark, but eBay is a reasonable place to check as well.

I could never recommend the K400 as a daily-driver headphone. They are far too limited in versatility across genres for that purpose. For most electronic and rock music, the K400 fail due to lack of dynamic impact and bass.

The exception to this is if you listen to primarily classical and jazz music, and soundstage is a priority for you. In such a case, I would still recommend weighing the Sennheiser HD580 heavily as an option, as I think they do most things better than the K400. But the K400 should be a decent backup option.

Do consider, as well, that the K400 need more juice than the HD580. They produce less volume, and a good amplifier is a must. This pretty much defeats the benefit of the low cost, since you’ll also have to budget for the amp.

Because of the skimpy low-end, the K400 sound pretty decent running from the headphone output of a speaker amp since they won’t get bloated from a high output impedance.

Overall, I won’t get rid of my K400 for years to come, but they won’t get as much head-time as some of my other headphones, due to their unique and niche sound. Still, I have a lot of real love for the K400, and I consider them a really fascinating and well-designed pair of headphones.