I purchased the Sony NW-A55 with my own funds.

Sony’s Walkman line of music players are legendary. I myself grew up with a Walkman cassette player and have fond memories of listening to several “best hits” mixtapes. Those were the days, huh?

Sony’s NW-A55 Walkman DAP brings back nostalgia while incorporating some modern features. That being said, the out-of-the-box experience is merely average at best. Released in 2018, it lacks some modern features like WiFi connectivity, type-C port etc. 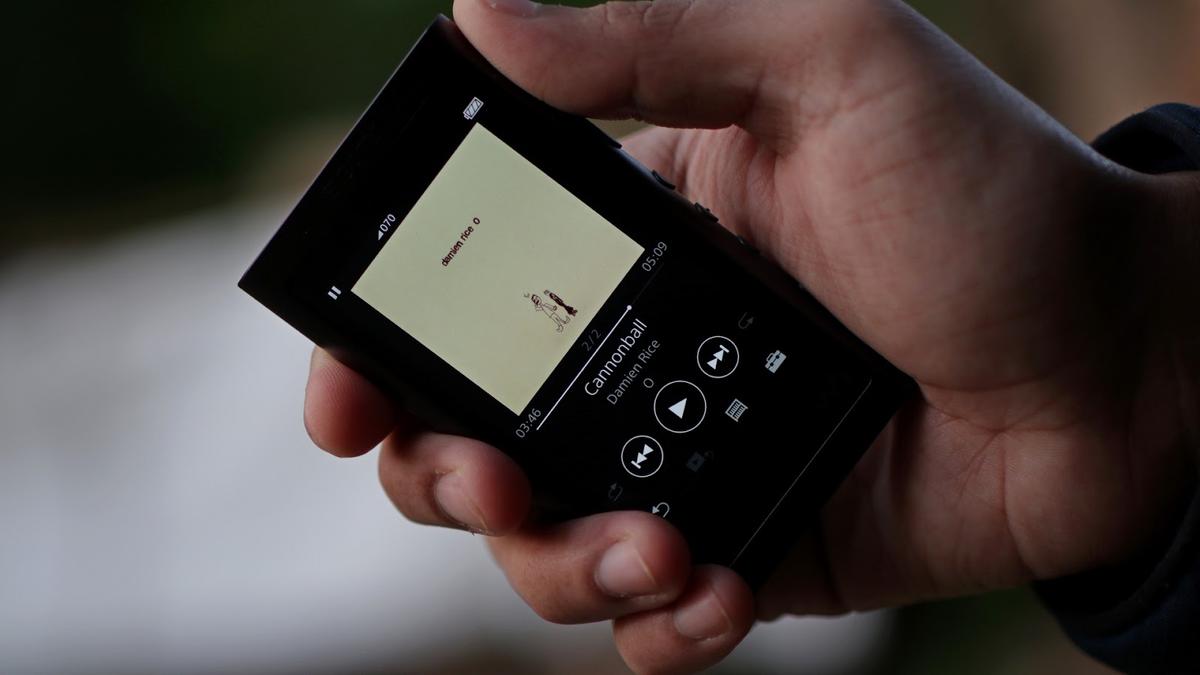 Sony’s NW-A55 is a hidden gem and it ticks most of the important boxes for a DAP: excellent design and ergonomics, class-leading battery life, sharp display, and a pleasant tuning that can be altered according to taste. Anyone buying the A55 should definitely go the custom firmware route. With the custom firmware installed, NW-A55 sounds better than any other DAPs within the USD $250 price bracket. Those who are uncomfortable with the process should likely choose an alternative.

Only when you get into tweaking does the A55 reveal its true prowess.

Given the entry-level nature of the device, the unboxing experience is no-frills. Just a plain box that you slide open.

The box basically has the WMPort charging cable inside and nothing else. So not much in the way of accessories, which is disappointing.

Sony absolutely nailed the industrial design with the NW-A55.

The candybar shape with rounded sides and flat corners make the A55 a joy to hold and operate in one hand. The buttons are also conveniently placed and can be distinguished with the device in a pocket.

Speaking of the buttons, they are placed on the right side of the device. The volume up and pause keys have raised “nubs” to distinguish them while in the pocket. Moreover, the buttons have differing sizes and shapes based on function (e.g. playback buttons are circular whereas volume buttons are rectangular). Sony’s attention to detail shines here.

The left side of the device houses the microSD card slot. The top side is bereft of controls or ports. Instead, the bottom of the device has all the ports: 3.5mm output jack, lanyard eyelet, and the notorious WMPort.

Sony’s decision to use a proprietary port is nothing but a nuisance. It forces you to carry an extra cable only for the NW-A55 and mars the otherwise excellent experience.

Measuring 3.1” diagonal, the NW-A55’s display might seem small by modern standards. However, given the overall footprint of the device and its intended function, this display size is absolutely fine. The display is very sharp with 300ppi pixel density, unlike many other budget DAPs with grainy displays, such as the Shanling Q1 with a 199ppi display.

My biggest gripe with the display is how dim it looks under direct sunlight.

Sony did not put any anti-reflective element under the display and this results in severe loss of contrast, especially in bright sun. A shame given the otherwise great panel.

The NW-A55 is as ergonomic as portable audio players get. It’s lightweight, but doesn’t feel “hollow”. It has the perfect shape for one-handed use, and Sony’s UI is customized to make the best use of limited screen space.

Sony’s proprietary UI can be navigated via swipes and the navigation bar at the bottom of the display. Swiping up from the playback screen shows the various DSP and sound effect settings. I personally keep “Direct Mode” turned on which disables all DSP and renders a reference sound.

The NW-A55 can also act as an FM radio tuner, and Sony’s hardware FM radio chip results in excellent radio reception. The BT sink function allows you to pair your phone with the A55 with the DAP acting as a Bluetooth dongle. Moreover, you can use the NW-A55 as a desktop DAC as well, though this requires software installation and there is some lag at times during playback.

Overall, it has a mostly logical UI layout with some expected oddities. You won’t need to refer to the manual to operate the NW-A55, and that’s a triumph on Sony’s part.

Battery life is excellent (20-45 hours depending on music file types and settings) and I usually have to charge it once every two weeks. This is a combination of the low output power, small display, and Sony’s frugal operating system. Recharge times are long, with approximately 4 hours needed for a full charge.

Most of the time you get some cool-sounding acronyms and marketing jargon instead of a detailed technical breakdown.

For the NW-A55, no information about the DAC chip is provided and the amp section is only referred to as “S-Master HX”. Digging deeper, I found that Sony uses an IC called “CXD 3788GF” that acts as the “digital amplifier”.

The DAC chip is reported to be FPGA-based and it’s due to the efficient DAC chip and low-power amp section that the battery life on the A55 is phenomenal. Sadly, I could not find much implementation details on the DAC side, or how the PDM signal is amplified to the output stage.

Depending on the firmware installed, the NW-A55 can drastically alter its sound signature.

Even ignoring the myriad of DSP tunings, the NW-A55 can be made to sound “different” based on the firmware version installed (official or modded), and even the region selected.

In stock form with all effects turned off, the NW-A55 has a warm-neutral signature. There is some roll-off in both the sub-bass and upper-treble frequencies even though it’s nothing significant.

Bass notes are somewhat soft and rounded in this firmware and the staging is about average. Overall, an inoffensive, if uninspiring sound signature. The NW-A55 in its stock form does not stand out in any way, and that’s the biggest downside and the greatest motivation to investigate the custom firmware route.

Before proceeding with this section, please note that installing custom firmware may void your warranty or potentially render your device unresponsive. The user assumes all risks of installing the custom firmware and must read the instructions carefully.

With that disclaimer out of the way, let me introduce you to the wonderful world of MrWalkman. MrWalkman is a modder who makes custom firmware for a lot of the non-Android Sony DAPs. The purpose of his firmware it to get the sound of higher-tier Walkman DAPs on a budget.

Given that most of these DAPs have internal similarities, the end result is tantalizingly close to this lofty promise. For example, installing Midnight V2 firmware on my NW-A55 made it sound surprisingly similar to the flagship Sony WM1A.

Now, the technicalities on the WM1A are far ahead of what the A55 is capable of, and so is the amplification power. However, some of the highlights of the WM1A are present on the A55 after this mod, e.g. spectacular vocal layering.

The latest update to the custom firmware scene (Walkman One) brings four different tunings in one package. The user can choose between various signatures based upon the IEM pairing. E.g. Neutral mode for reference sound, or “WM1Z” option for a sound signature akin to the venerable Sony WM1Z.

These mods also add extra features to the UI, for example a VU meter that is usually unavailable on the NW-A55, and extra DSP effects or modes.

These custom firmwares unearth a treasure trove of hidden perks that Sony decided to hide away from the budget buyers.

So if you are feeling adventurous enough, go ahead and install the custom firmware, assuming all the risks of course. I personally found the installation process fairly simple, and reverting to stock firmware literally takes only two clicks.

For the installation process, please refer to the FAQ section on MrWalkman’s website. Bon voyage!

The NW-A55 is only suited for moderately sensitive, low-impedance IEMs and headphones. Using high impedance IEMs or headphones like the Sennheiser HD560S (120 ohms) results in a muddy and muted sound. Meanwhile, low sensitivity IEMs like the Final E4000 (97 dB/mW) demand the volume to be pushed much higher and you end up not having much headroom.

Another potential issue can be hiss with extremely sensitive IEMs. Both the Final FI-BA-SS (112 dB/mW) and the Campfire Andromeda (113 dB/mW) exhibited hiss and elevated noise floor. Granted, once the music plays you do not notice this, but during quiet passages it is noticeable. I will recommend using IEMs or headphones with sensitivity between 100-110 dB/mW and nothing more than 32 ohms.

Fortunately, the vast majority of IEMs released fall within the “operation limits” of the NW-A55, so it’s not all bad news.

The Hidizs AP80 Pro is priced a bit lower than the NW-A55 and is another favorite DAP of mine. I like the size, design language, and the bright display. The touch-based Hiby OS is also easy to navigate, though animations can get choppy.

In terms of build quality and ergonomics, I give the nod to the NW-A55. The Sony DAP is more comfortable to hold and doesn’t attract smudges like the AP80 Pro. General UI features are fleshed out on both. AP80 Pro has some added features like step counter and ebook reader whereas the NW-A55 has more interesting DSP effects.

AP80 Pro has MSEB (Hiby’s DSP engine) but the implementation on the AP80 Pro does not sound as pleasing as on Hiby’s high-tier DAPs. Also battery life is far superior on the NW-A55. The AP80 Pro has better connectivity, however, with the type-C port being a lifesaver.

Additionally, the AP80 Pro is better as a DAC because it doesn’t lag with high bit-rate or DSD files when connected to a Windows PC, and it has a proper line-out with fixed voltage (2Vrms) for connecting to an external amp.

In terms of sound, I prefer the tone of the modded NW-A55 (especially the WM1Z tuning from the custom firmware). The tonal richness and layering is better on the Sony DAP. The AP80 Pro has excellent separation and resolves as well as the NW-A55 but the mids do not sound as engaging. AP80 Pro does have more output power, a balanced output, and barely hisses with sensitive IEMs.

I tend to pick the NW-A55 for most of my outings, but the AP80 Pro gets the nod when I am dealing with sensitive IEMs or need to use something as a DAC with my laptop.

Sony’s NW-A55 is a hidden gem and it ticks most of the important boxes for a DAP: excellent design and ergonomics, class-leading battery life, sharp display, and a pleasant tuning that can be altered according to taste.

Caveats apply though, as modding or installing custom firmware won’t be everyone’s cup of tea. That being said, the Sony NW-A55 has aged gracefully and seems to get better with every custom firmware release. Even after four years since the initial release, it’s pulling out new tricks from its sleeve. In the age of rapid-fire releases from manufacturers, this change of pace is very welcome.

The custom firmware is the sole reason one should get the A55.

Anyone buying the A55 should definitely go the custom firmware route. So those who are uncomfortable with the process should likely choose an alternative, such as the AP80 Pro, for example. Keep in mind, the custom firmware is extremely easy to install. Download two files, connect the walkman, launch the setup wizard, within 30 seconds you’re done.

With the custom firmware installed, NW-A55 sounds better than any other DAPs within the USD $250 price bracket, and I have personally tested most of them. The low output power and hiss issues were only apparent with the likes of Andromeda, E5000, and FI-BA-SS which usually demand much higher tier sources anyway. On the other hand, the NW-A55 showcased great synergy with the likes of Sony IER-M9 and IER-Z1R.

The Sony NW-A55 earns my heartfelt recommendation as the most fun I’ve had with a portable audio player in ages. However, I did struggle with assigning a fair rating. With custom firmware, I rate the NW-A55 a full point ahead of its stock configuration (4/5 vs 3/5).