The Deva Pro fills a niche by offering Bluetooth connectivity in a pair of open-back, planar-magnetic headphones. Sadly, the tuning is far from perfect.

Thank you to HiFiMAN for providing the Deva Pro for review purposes.

In 2019, HiFiMAN surprised everyone when they announced the Ananda BT, a pair of wireless, planar-magnetic headphones that were also open-back. It was unlike anything available on the market and had an extremely niche use case.

Fast forward to 2022, and HiFiMAN now has the Deva Pro, a cheaper alternative to the Ananda BT that address some of the key issues of that model, namely the lack of an analog-only mode and heavier weight. 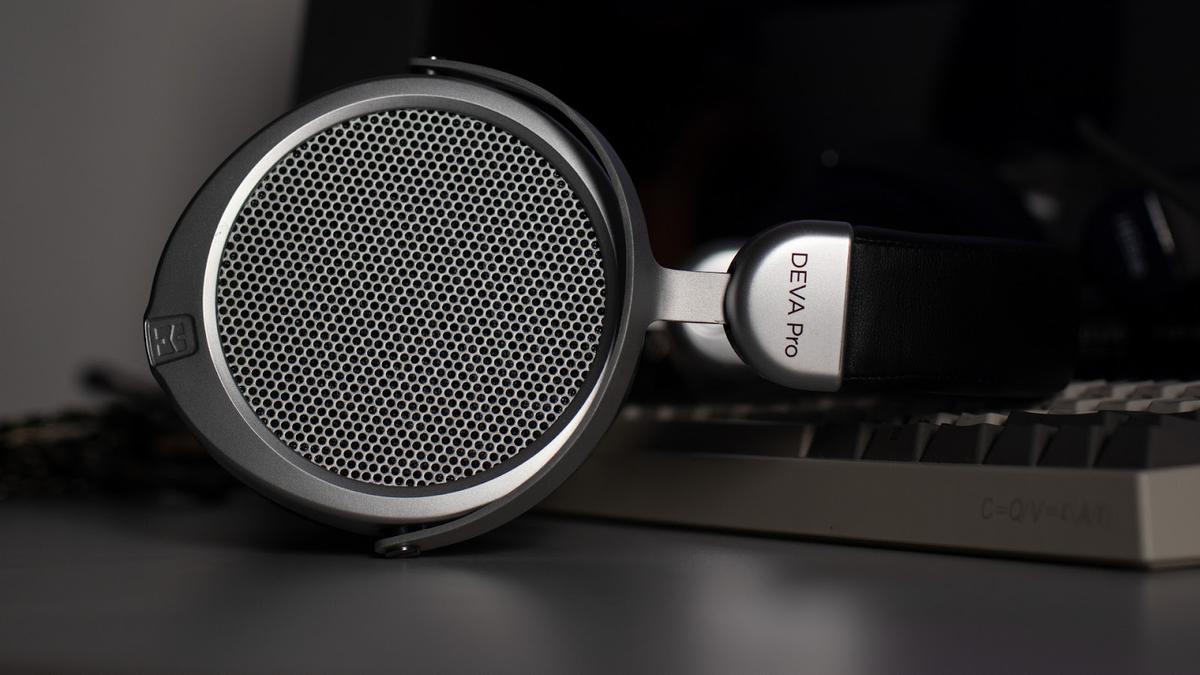 The HiFiMAN Deva Pro are below average when compared to other wired planar-magnetic headphones in their price range. On the other hand, they are more resolving than the typical wireless, closed-back headphones out there, but also less practical and lack features like ANC (Active Noise Cancellation) that many consumers expect in this price range. So, the Deva Pro face an identity crisis and do not excel as Bluetooth headphones or as wired planar-magnetic headphones. Innovation alone cannot hide the fatiguing sound signature and less-than-stellar build.

Both of these issues are solved on the Deva Pro courtesy of the included BlueMini R2R module that can be detached as needed.

Let’s see if the Deva Pro can match their peers when it comes to sound quality, as they are taking on both wired and wireless planar magnetic headphones.

HiFiMAN has a simplified look to all their product packaging nowadays, and the Deva Pro are no exception. The stealth magnet sticker points to the revised driver design of this model—more on the driver redesign later in the Sound section.

The supplied accessories are pretty decent considering how notoriously poor the stock HiFiMAN accessories are. For example, their flagship Susvara come with perhaps the least ergonomic stock cable in existence and lacks a carrying case or even an extra set of pads in the package.

HiFiMAN opted for a slightly different ear cup design than their existing HE-series of headphones or the likes of Arya or Ananda. The shape of the cup is not as oval as the Arya, nor as round as the HE-400se.

The ear cups are made of plastic though the silver finish meshes well with the aluminum yoke.

Another less noticeable design difference is the wire running through the underside of the headband from one cup to the other. This wire allows using the BlueMini module to plug into just one earcup and get sound on both sides.

Sadly, you cannot use BlueMini module on other Hifiman models that lack this “bridging” wire between cups.

The earcups have a perforated cloth material on the front with a solid pleather surround. The headband is foam-padded as well, though I wish the foam was slightly softer. Nonetheless, no hotspots formed on the temple or the sides of my head during the review period. At the bottom, there are two 3.5mm TRRS ports.

The yoke and headband are made out of aluminum. Unfortunately, the yokes have sharp edges that can be annoying. It’s not sharp enough to cause injuries, but it does illustrate some deficiencies in the fit and finish of the product.

Comfort is excellent due to the lightweight design, plush earcups, and low amount of clamp force. Isolation is non-existent, as expected from an open-back design.

The highlight of the Deva Pro is the BlueMini R2R module (it can be purchased separately if you wish). This module allows the Deva Pro to become a “Bluetooth” pair of headphones, since the Bluetooth electronics are all inside the module instead of the headphones. The module can be plugged into either earcup.

There is a Type-C port at the bottom that can either charge the module or allows connecting to a computer to act as a DAC-amp. The solitary button can be used to power on or off via long-press, whereas a short-press disconnects the Deva Pro from the current device. A double press takes it into pairing mode.

There is also a status LED at the bottom, though voice-prompts are there as well to let you know when the BlueMini has connected, disconnected, or put in pairing mode. Finally, there is a mic at the bottom. It’s serviceable at best with a compressed-sounding voice and little noise cancellation.

The battery life is rated at 8 hours, although I only got about 6.5 hours connecting via the LDAC codec. This is not as good as most mainstream BT headphones, but, keep in mind, that those headphones do not use planar magnetic drivers.

There is ample power here to get the Deva Pro very loud. A quirk of the module is that the volume increments are not linear when connected via Bluetooth. At lower volumes, it’s too quiet, and then right after 50%, it gets tad too loud for me. Connectivity is stable until 7 meters, then there are occasional connection dropouts.

HiFiMAN is using their tried-and-tested planar magnetic drivers on the Deva Pro, though they made the driver even more efficient this time. The most notable changes in their latest driver revision are the stealth magnet assembly and the neo-supernano diaphragm.

The stealth magnet assembly has magnets with rounded edges, which apparently reduces the turbulence as sound-waves pass through them. This apparently makes the magnet array almost “acoustically transparent” and reduces distortion.

Meanwhile, the neo-supernano diaphragm refers to the nano-scale thinness of the diaphragm itself, with a sub-micron level voice coil traced onto the diaphragm.

The following sound impressions were formed with the stock earpads and stock cable or the BlueMini module. The Questyle CMA-400i and Macbook Pro were used for wired listening, and Pixel 4XL was used for wireless listening. The LDAC codec was used throughout. Test tracks are available on Tidal as a playlist.

The Deva Pro have a bright-tilted sound with the bass being more emphasized in Bluetooth mode, whereas the treble gains more presence in wired mode.

Bass starts rising from 30Hz and becomes noticeable around 40Hz. Bass response is pretty much flat. In BT mode there is more emphasis near the sub-bass it seems, though the bass sounds rolled-off after 35Hz in all three modes (Bluetooth, USB, and wired).

The bass has a decent amount of punch and slam but lacks physical rumble. Also mid-bass texture is lacking to a degree. Bass is fast, thanks to the planar drivers, but can also veer towards distortion at high volumes.

The lower-midrange is well-tuned with male vocals having enough body. String instruments also have a good sense of “bite” in the leading edge of notes. Keyboards and pianos lack the heft or the note-weight to truly sound “grand” but they do not sound anemic in any way.

Unfortunately, the upper-midrange is quite intense. There is no noticeable frequency dip between 2-5kHz, resulting in a very up-front midrange. Such tuning also hampers soundstage depth and microdynamics.

This intense upper-mid focus makes female vocals sound overly energetic at times, and the lack of sub-bass extension coupled with flat mid-bass exposes this further. Colbie Caillat’s Realize is a good example of this intensity.

Treble is peaky and the boosted upper-treble frequencies cause fatigue in long listening sessions.

Cymbal hits have extra sizzle to them, which I cannot listen to for any extended period. The lower-treble emphasis also adds instances of sibilance, though those are rare.

Sibilance is more evident in wired mode, as the R2R BlueMini module reduces it noticeably. Treble extension is lacking as there is not much response after 12kHz. The boost near 11kHz cannot hide the lack of resonance, instead, it adds an unnatural “sheen” to hi-hats and crash cymbals.

Soundstage lacks depth no matter which mode you use. Stage width is also compressed in Bluetooth mode but fares better in wired mode. Imaging is average as it’s hard to discern the location of instruments in ordinal directions.

Dynamics are compressed, with little macrodynamic punch and non-existent microdynamic shifts (subtle gradations) in volume. Speed is above-average for the price range, and busy passages could have better instrument separation.

It’s hard to make an “apples vs apples” comparison with the Deva Pro since I have not used another wireless, open-back, planar magnetic pair of headphones.

The Audeze Penrose is wireless and has a planar magnetic driver but they are closed-back. The remaining Bluetooth headphones use dynamic drivers and are tuned very differently, e.g. the Sony WH-1000XM4. Compared to mainstream Bluetooth headphones, the Deva Pro are more resolving in the bass and treble and have better imaging.

Their open-back nature make them unsuitable for commuting, though, and the low clamp force is not ideal when wearing them during physical activities.

When it comes to comparing similar open-back wireless headphones, there are the HiFiMAN Ananda BT but they are priced near the flagship range and would be a very unfair comparison. So, the Deva Pro escape further scrutiny in the comparisons section by being the lone-ranger in their price bracket.

The HiFiMAN Deva Pro are below average when compared to other wired planar-magnetic headphones in their price range. On the other hand, they are more resolving than the typical wireless, closed-back headphones out there, but also less practical and lack features like ANC (Active Noise Cancellation) that many consumers expect in this price range.

So, the Deva Pro face an identity crisis and do not excel as Bluetooth headphones or as wired planar-magnetic headphones. One potential use-case could be having them as an all-in-one solution, but then you are sacrificing the lifestyle features of the best wireless headphones and the sound quality of the best wired headphones.

The Deva Pro are an interesting experiment, but they are underwhelming with all things considered. I gave them an additional 0.5 as a bonus in the rating for being innovative, but innovation alone cannot hide the fatiguing sound signature and less-than-stellar build.