The TempoTec V6 is one of the best DAPs you can purchase for under USD$500, and the early bird pricing makes it an absolute no-brainer.

Thank you to TempoTec for providing the V6 for review purposes.

TempoTec has been around for a while, mostly dabbling in OEM and ODM ventures, with the Sonata line of portable DAC-amps enjoying some popularity. The offerings are mostly solid, with a good price-to-performance ratio.

However, nothing else in the lineup resembles the V6, TempoTec’s first Android-powered Digital Audio Player. The V6 retail price places TempoTec in the crosshairs of established DAP manufacturers like iBasso and Cayin. Calling this competition “tough” would be an understatement. 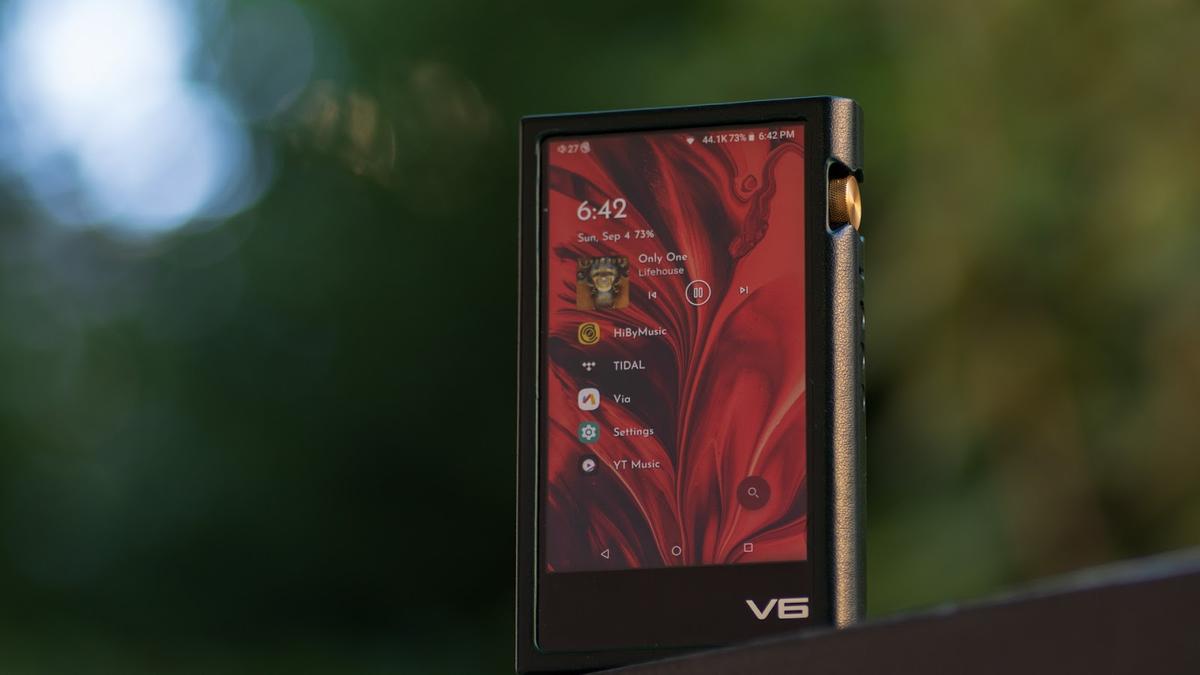 Once you hear the V6, it becomes very apparent that barring some unforeseen events, it will be one of the most popular DAPs under USD$1000. It sounds great, has decent OS performance and battery life, and is priced aggressively even without the campaign bonus.My only concern is TempoTec's commitment to fixing software bugs and general support. If TempoTec can deliver on those aspects in the long run, the V6 will hold its value long after the release, something that I cannot say for most products in the market. The TempoTec V6 earns my glowing recommendation, and it is a no-brainer at the Kickstarter early-bird pricing.

TempoTec has also got its work cut out as a completely new player in the DAP market, and there is room for skepticism. Fortunately, the V6 manages to hold its own amidst stiff competition while managing to throw a curve ball in the form of the Kickstarter “early-bird” pricing.

I received the product in pre-production packaging, so it may not reflect the final packaging.

I received a plain cardboard box with the DAP and the accessories tightly packed inside foam cut-outs.

The carrying case deserves a special mention here as it looks and feels fantastic. It also negates the need to hunt for third-party alternatives. A nice touch from TempoTec.

TempoTec went for the ever-popular glass-metal sandwich design with the V6.

The bezels on the side and top of the display are fairly small and can barely be noticed with the case on. Sadly, the bottom “chin” is a bit too large. Probably a cost-cutting measure on TempoTec’s part.

The general fit and finish of the device are good, but the large font of the model number looks tacky. I wish TempoTec went for a more reserved look for the front panel.

On the right side of the device, there are the playback buttons, the status LED, and the volume/power wheel. Unfortunately, the playback buttons are difficult to identify or press with the case applied. The LED light changes its color based on the current sample rate of the song.

As for the scroll wheel, it is responsive when changing volume, but the middle press action could do with more tactility. I like the knurled finish here, which reminds me of some of the LoToo or Cayin DAPs.

At the bottom of the device, we find all the I/O ports. Both balanced and single-ended headphone and line-out ports are available, with the type-C port slotted in between. The line-out ports operate in fixed voltage mode and can be used to stack together with external amps.

Finally, the left side of the device houses the microSD card slot (max 2TB), and the top is bereft of controls or ports.

Other than some nitpicks – I have no complaints regarding the actual build quality. The V6 is a well-put-together device, and the dedicated line-our ports sure come in handy.

The TempoTec V6 has a 4.2″ 768p display with a mediocre contrast ratio but excellent sharpness.

Sunlight legibility is decent, but you have to manually push the brightness to maximum, as the V6 lacks an ambient light sensor. The display is also not very color-accurate, with a noticeable yellow tint.

TempoTec cut some costs by picking a budget-friendly LCD panel, but it gets the job done.

The V6 is easy to operate in one hand, with the added thickness ensuring a secure grip.

TempoTec went for a clean build of Android 8.1 AOSP, with no bloatware to be seen. The lack of annoying apps is a plus, but the outdated OS version is a bummer.

Sadly, multitasking is out of the equation with only 2GB of LPDDR3 RAM.

General operation is good enough for daily use with rare occasions of slowdowns and unresponsiveness. Trying to keep multiple apps open in the background ends up hampering device performance noticeably.

As a result, I will recommend not logging into the Google Play Store if possible, side-loading apps like Tidal and Spotify, and minimizing the number of apps installed.

Music apps like Tidal, HibyMusic, and YouTube Music run without any issues, so I will not complain too much about the archaic Snapdragon SD425 SoC. It’s a cost-cutting measure that TempoTec just about gets away with.

I replaced the stock launcher with Niagara Launcher. Give this one a try if you are using the V6 or a similarly specced Android DAP.

TempoTec claims 13-15 hours of battery life, depending on usage. For my personal use (about 3-4 hours of music per day), the V6 needs charging once a week. Fortunately, the standby battery drain is minuscule, so I do not need to turn the device off when not in use.

You can also use Android’s power-saving mode to eke out an extra bit of battery life, though performance is further reduced with that mode turned on.

The V6 uses dual AK4493SE DAC chips, which are the latest revision of the 4493 series of chips since AKM resumed production following the ill-fated factory fire. Each DAC chip handles only one audio channel, forming a fully-balanced architecture.

I/V conversion is handled by a pair of Texas Instruments OPA1612, one for each channel. The signal is then further amplified by a total of four OPA1688 op-amps, two for each channel. TempoTec calls their differential topology the “pyramid structure,” with the single DAC chip forming the tip of the pyramid and the two OPA1688s being the base.

TempoTec also used an FPGA chip to remove phase noise, which they claim to have an adverse effect on sound quality.

TempoTec’s tuning goal for the V6 was to focus more on the “naturalness” of sound than something analytical.

I’d say they have reached their target.

The V6 has a warm-neutral tuning, with a noticeably rounded leading edge of notes. This is most noticeable in strums of acoustic guitars or sharp guitar riffs. As a result, the V6 paired really well with IEMs that tend to be a bit on the bright or analytical side.

Hiby’s MSEB is present on the V6 and offers a wide host of sound tuning options with easy-to-understand labels (warm, cool, bright – you get the gist). The stage depth and width can also be “adjusted” via sliders, though I can never quite shake the feeling of “processed sound” when using MSEB.

Unfortunately, there is no system-wide parametric EQ support, which would make tweaking the sound more fun for experienced users.

It’s difficult to describe the sound of sources without comparing how they “pair” with specific earphones and headphones. I tried to test out the limits of the amp section on the V6 by trying out some power-hungry planars and dynamic-driver headphones.

The Final E3000 are often difficult to power despite their budget stature. Fortunately, the V6 powers them with ease, and the resulting sound is dense and atmospheric, and retains the excellent separation of the E3000.

The Campfire Holocene also sound phenomenal on the V6. They can be picky due to very high sensitivity to high noise-floor, but the V6 handles them with grace. I couldn’t hear any hiss with even the most sensitive IEMs in my collection.

The pairing with the Dunu Zen is a mixed bag. I miss the sharpness of notes that Zen’s driver can produce on something like the Lotoo PAW 6000. The treble is even darker, which makes the Zen tad less resolving than they are capable of being.

The Final E5000 prove too tough a challenge for the V6 as they lack the tightness in bass and engulfing headstage I expect. Then again, very few portable sources do justice to them due to their extremely low sensitivity (91 db/mW) and low impedance (14 ohms).

Overall, for most IEMs (apart from anomalies like Final E5000), the TempoTec V6 is more than adequate and likely the only mid-fi DAP you’ll ever need. The TOTL DAPs (e.g., the venerable LoToo PAW 6000) will outperform it, but diminishing returns set in quickly.

On the headphones side, the Final Sonorous III and HiFiMAN HE-400se fared well, though the latter sounded more dynamic on my desktop setup (as expected). That being said, the V6 took some edge off the HE-400se’s treble, resulting in a very pleasing signature. I love this combo!

The Meze 99 Classics and Moondrop Void also sound just as good as they do on desktop systems. These efficient headphones are perfect for use with the V6 on the go.

Pairing the V6 with power-hungry headphones like HiFiMAN HE-6se or the likes of Sennheiser HD650 (that require a higher voltage swing) resulted in average performance. The HE-6se V2, in particular, demands an insane amount of current, and the V6 (or most portable players) simply can’t match that requirement.

For power-hungry headphones, I’d recommend using an external amp with the V6 since the DAC section is otherwise fairly capable.

For me, the first point of comparison for any DAP is the Sony NW-A55 (MrWalkman modded).

The TempoTec V6 is a meaningful upgrade over Sony’s venerable-but-ageing Walkman. Android brings third-party apps to the table on the V6, whereas the BT performance and raw output power are on another level on the TempoTec.

The balanced out offers better separation and staging over the NW-A55, and macrodynamic punch has a more visceral presence on the V6.

The Sony still offers class-leading battery life of 45 hours (vs. 13 hours on the V6), but the WM-port makes recharging a hassle. I also like the svelte profile of the Sony, though the display on the V6 has much better sunlight legibility.

In short, if you are using the NW-A55 for a while and want an Android DAP that takes things to the next level, the TempoTec V6 is an excellent option.

On the Android side of things, the iBasso DX160 is another popular option under USD$500. I prefer the iBasso offering in terms of design and build quality.

On the other hand, the V6 is smoother in terms of operation with fewer software issues and has a more analogue-ish tonality. The DX160 has a wider stage, while dynamics are better reproduced on the V6. Battery life is also better on the V6.

Overall, I’d pick the TempoTec V6 over the iBasso DX160. As for the A55, I am partial to that device and will probably keep it around even though the V6 is better all around.

TempoTec took a giant leap going from the entry-level V1 to the V6, with the pricing giving rise to some doubts about the V6’s competitiveness.

Once you hear the V6, though, it becomes very apparent that barring some unforeseen events, it will be one of the most popular DAPs under USD$1000. It sounds great, has decent OS performance and battery life, and is priced aggressively even without the campaign bonus.

My only concern is TempoTec’s commitment to fixing software bugs and general support. If TempoTec can deliver on those aspects in the long run, the V6 will hold its value long after the release, something that I cannot say for most products in the market.

The TempoTec V6 earns my glowing recommendation, and it is a no-brainer at the Kickstarter early-bird pricing.