Thank you to Linsoul for providing the BLON BL-B60 for review purposes.

People mostly associate BLON with the legendary BL-03 IEMs which have an engaging, warm, and generally likeable sound. BLON is not new to headphones either, with their BL-30 (sporting a ridiculously large 70mm driver) and B20 (planar driver) headphones.

However, those headphones did not set the market alight, perhaps because they do not have an accessible tuning like BLON’s legendary IEMs. The BL-B60 intend to correct BLON’s full-sized headphones track record and aim to punch above their modest price tag. 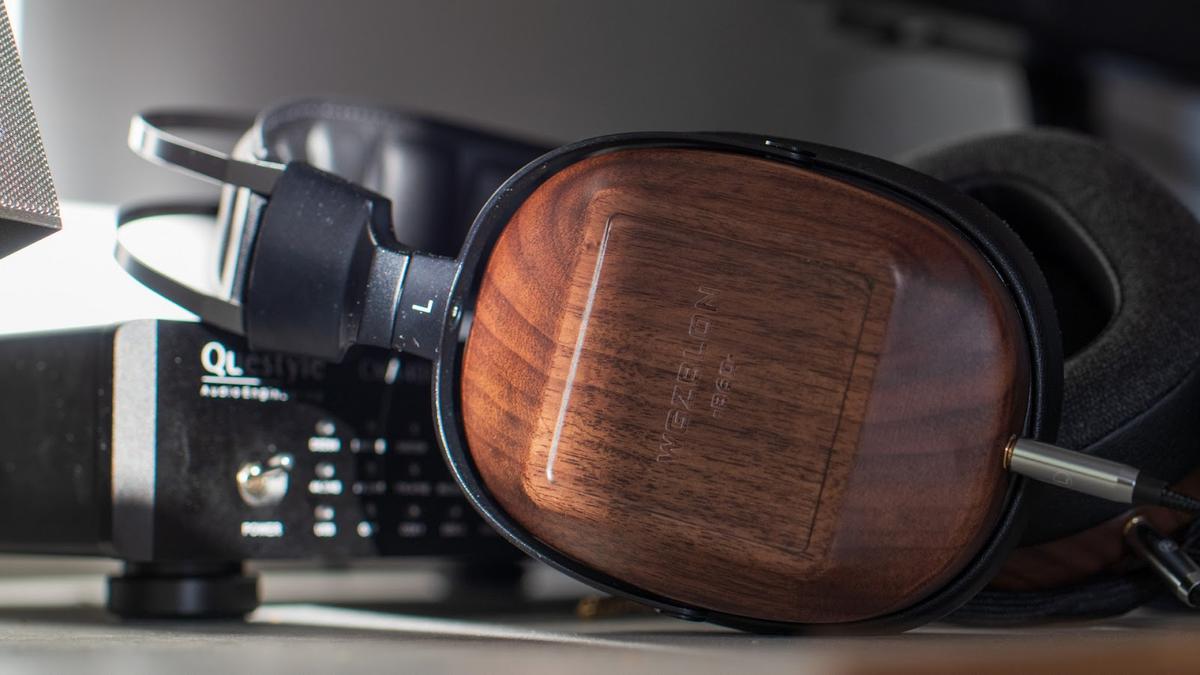 BLON did get some of it right with the B60. The walnut housings look nice and the Be-coated driver has potential. It’s all for nought though as the midrange tuning completely butchers the listening experience. If you are willing to modify them or use EQ, these headphones might have some potential, but without equalization they are irrelevant.

Did BLON manage to make a lasting mark in the headphone scene with the BL-B60? Let’s find out.

BLON has finally fixed their typo-infested slogan. Now it reads:

It still does not make a lot of sense.

Nonetheless, there isn’t much in the way of packaging. Pulling off the outer cover reveals the headphones themselves. The carrying pouch and stock cable are tucked underneath.

The stock cable is fairly good in terms of ergonomics and pliability. It is a 1.5m, cloth-braided cable with a 3.5mm termination. Unfortunately the cable transmits a lot of touch-noise when it rubs against a shirt or jacket.

The carrying pouch is also disappointing in the sense that it is merely a cloth bag and offers no protection from impact.

The B60 are mostly made out of stainless steel and wood. The earcups are “imported walnut”, whereas the headband and the yoke are stainless steel. The hybrid earpads have a pleather surround with velour on the outside.The headband covering is also pleather with bits of memory foam inside.

On top of each ear cup there are three vents for pressure regulation. Covering these vents results in increased bass. Something for the modders to try out. The cups can swivel and rotate a full 180 degrees, so they should adjust to most face shapes. The earpads are easy to replace too. Simply pulling out from a corner will do the job.

On paper, the build looks good. It is the execution that is somewhat lacking.

The hinges make a noticeable “squeaky” sound whenever rotated. The headband transmits noise to the ears whenever you touch them while wearing the headphones. The headband padding feels cheap as well.

Overall, the BLON B60 are well put together, but not outstanding. The finish on the walnut ear cups is excellent and there is little plastic in the build. A better hinge and more padding in the headband are needed and would benefit from some modifications.

Due to a moderately tight clamp-force and the memory-foam filled earpads, the B60 have good isolation. Comfort is mostly fine for me but after an hour of use hotspots start forming around the top of your head. Better padding on the headband would likely solve this issue.

Clamp force might be an issue for those with a larger-than-average head. The actual headband extension mechanism works well, so no complaints on that front. Moreover, the earcups are fairly deep so your ears won’t touch the driver housing while wearing the headphones.

The driver shape is pretty standard with a raised “dome” and a corrugated driver surround. I assume the underlying material is PET or one of its variants.

Removing the pads, we get a closer look at the driver assembly. The driver baffle is made out of plastic with two pieces of white paper placed on them. The paper pieces themselves have cutouts for vents. I am not entirely sure about the purpose of this paper piece, perhaps to dampen the high frequencies? Please let me know in the comments if you know what’s going on.

The driver is slightly angled away from the ears. There is a protective grid on top of the driver diaphragm. The driver housing can be removed by removing four screws (sitting deep into the holes on four corners). It seems that modders could have a lot of fun with these headphones.

The BLON BL-B60 have a V-shaped tuning. However, neither the bass nor the treble are overly emphasized. There is a noticeable recession in the lower-mids though and this makes the presentation somewhat odd.

The following sound impressions are formed with stock earpads, stock cable, and Lotoo PAW 6000 or Questyle CMA-400i as sources. Test tracks available on Tidal as a playlist.

Bass is the best aspect of the B60.

The sub-bass frequencies are evident until 30Hz and then it rolls off. Sub-bass presence is strongest around 40Hz so expect a decent amount of rumble and punch in EDM or bass-heavy tracks.

The mid-bass is less pronounced and could do with a bit more emphasis. Heavy snare hits lack the physicality and body one would expect. This lack of mid-bass punch does help with keeping the mids clear and bloat-free. Depending upon taste, some might find this sub-bass focused bass tuning better suited to their playlist.

The midrange is where things start to fall apart for the B60.

The lower-midrange is recessed by about 3dB between 1-1.5KHz. This is preceded by the mid-bass recession and as a result male vocals sound strangely high pitched. Baritone vocals are thinned out and many lower-pitch notes lose their weight.

Grand pianos sound thin and the thick understroke of the keys bottoming out is nowhere to be found. Meanwhile vocals with a normal pitch sound unnaturally high-pitched. As a byproduct, the upper-mids can get shouty since the contrast between the lower-mids and the upper-mids is too jarring.

The treble is characterized by a peak around 7KHz and an upper-treble peak around 12KHz to exaggerate air frequencies. I think BLON emphasized the upper-treble too much and the B60 can get fatiguing over time. The 7KHz peak is less offensive in comparison and only adds a hint of brightness to the sound.

In isolation this treble peak would not be too problematic. Unfortunately the aforementioned midrange issues further pull focus towards the treble brightness. Timbre is dry as well due to the tuning choices.

Overall, a good start for BLON with the bass tuning on B60, but things rapidly go downhill as soon as we hit the midrange frequencies. A shame, really.

Soundstage is narrow as is common for most closed-backs (especially the budget ones). Imaging is mostly left and right with no discernible placement of instruments in-between. Layering is fairly good, however, with instruments having a distinct outline between them in all but the most complex tracks.

Macrodynamics (i.e. sudden change in volume level) are portrayed better than average closed-back headphones in the budget range. Microdynamics (i.e. gradual changes in volume) are less impressive as everything is played back at about the same volume. The driver is fairly fast and does not seem to struggle in fast-paced songs.

The Audio-Technica M50X are some of the most popular closed-back headphones in the USD $100-200 range. They are used regularly in studios for recording and mixing or mastering sessions.

Sadly, I find them absolutely awful for my personal tastes. The entire frequency response is full of random, nasty peaks and dips and the soundstage is non-existent. The imaging is also awful and worse than many budget IEMs. Worst of all is the comfort which routinely caused me headaches while I had the M50X in possession.

The BLON B60 are better headphones than the M50X, though the M50X have superior build quality. B60s have issues in the midrange, but the M50X have issues across the entire spectrum. That being said, both of these headphones are subpar choices if you are looking for a pair of budget closed-back headphones.

AKG debuted the K371 about two and half years ago and since then they have become quite popular among Harman target enthusiasts. The K371 practically nails the said target curve and in general offers a mostly neutral midrange and treble.

In terms of build quality, I prefer the wooden cups of the B60 but the K371 have better headband design. Both of these headphones have moderate clamp force but K371 is slightly stronger. Overall fit and finish is better on the K371 and they also fold neatly for carrying around.

As for sound, the midrange of the K371 is what I call “tonally correct”. They just sound right and natural. The upper-mids on the K371 can get shouty on tracks with little to no bass, but that’s a common criticism of the Harman target in general.

Soundstage is lacking on both of these headphones but the K371 have slightly better imaging and separation. Dynamics are middling as well so nothing to discuss on that front. I do think the BLON’s driver is faster and more capable than the K371 driver, but it is let down by poor tuning decisions.

The AKG K371 get my nod over the BLON B60 as the former have a far more pleasant tuning.

BLON did get some of it right with the B60. The walnut housings look nice and the Be-coated driver has potential. It’s all for nought though as the midrange tuning completely butchers the listening experience.

If you are willing to modify them or use EQ, these headphones might have some potential, but without equalization they are irrelevant.

BLON B60 are another also-ran, and I cannot recommend them given the poor lower-midrange tuning.