7Hz had a real hit on their hands with the planar-magnetic Timeless. Now they return with a single dynamic driver model with a proven track record.

Thanks to Shenzhen Audio for providing this unit for review purposes.

IEM manufacturer 7Hz is coming off a highly successful product: their Timeless were hailed by many trustworthy sources as a serious contender for the best mid-fi pair of planar magnetic IEMs. So I was excited to try their newest offering, which uses a relatively common driver configuration: a single, 14.5mm dynamic driver. 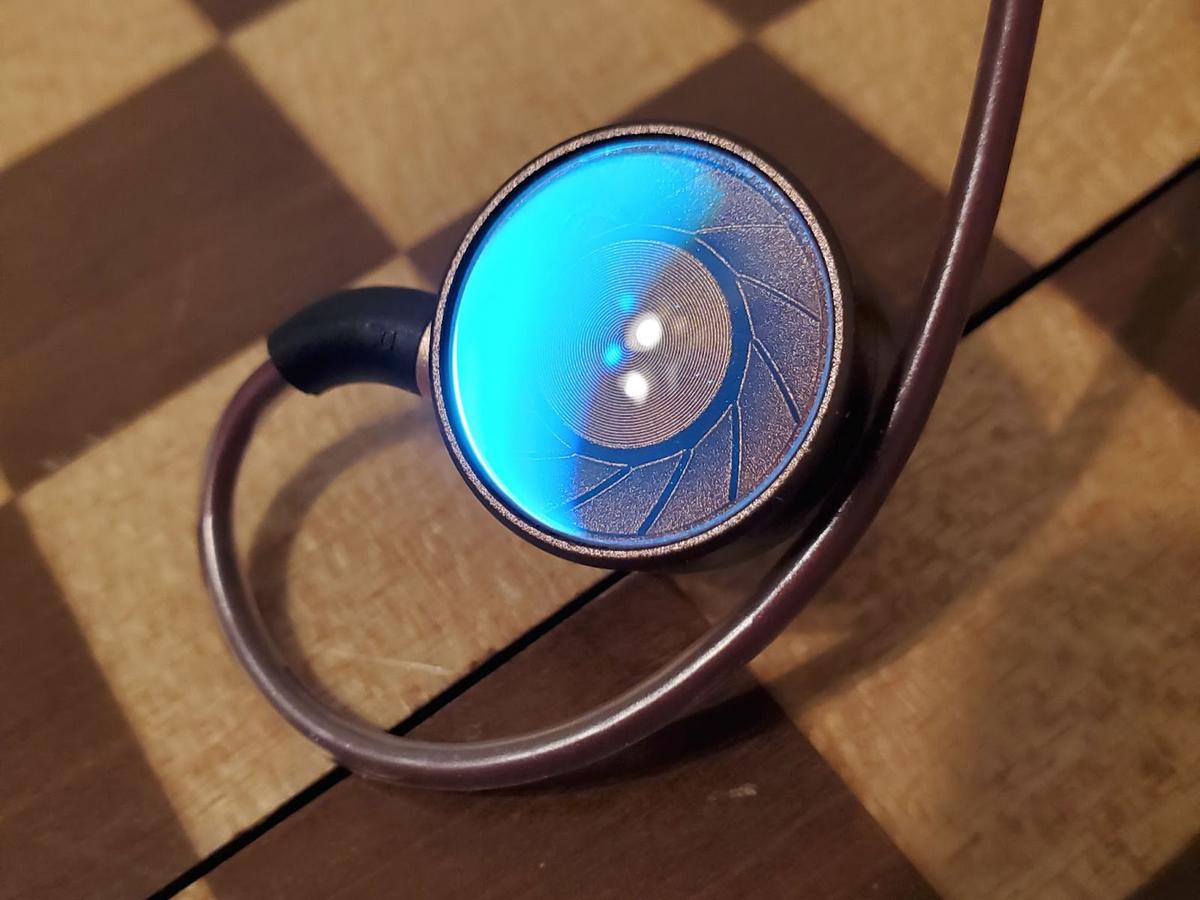 While I find the Eternal slightly lackluster for the price, there are certainly areas where the Eternal shine. They look great, and the midrange is not terrible, adopting a rough diffuse-field curve to good effect. But the rubbery bass and confined-sounding treble let them down: this is not best-in-class sound, unfortunately. Fit can also be an issue given that they are so large. Make sure you have decent amplification on hand - the large drivers mean this pair of IEMs will take whatever power you can offer!

Unfortunately, due to global shipping difficulties, the earphones took a little while to get to me; but when they did, I was immediately pleased by their presentation and overall “look.” Not everyone will love them, but 7Hz has tried something really unique with the Eternal.

But the Eternal faces stiff competition. The USD$200-$300 price range has blown up in the last couple years. Some time ago the Etymotic ER4 reigned supreme, but now they face competition from a bunch of different IEMs that all offer something different.

Can the Eternal provide something that is good enough to be considered within the best of this ultra-competitive price range?

What’s in the box?

Even if our sonic impression of a pair of IEMs represents our final judgment, the first impression for most of us comes from visual feedback, and here the Eternal really shine. They are beautiful IEMs, whatever you think of their other aspects.

When I showed the Eternal to my friends, the response was uniformly positive. They look interesting and tasteful. They have an eye-catching but subtle brownish-red hue, a highly visible driver reflector, and iridescent glass that forms the outward-facing back of the capsule.

Perhaps most importantly, they offer something different. In a sea of similar-looking prefab IEMs, the Eternal look unique.

The design emphasizes, of course, the huge 14.5mm dynamic driver that is the only transducer within the Eternal. It’s not like the Eternal are the first IEMs to have a large dynamic driver – the Sony MDR-EX1000 are perhaps the most famous example.

But in a field dominated by hybrid or multi-driver builds, it’s worthwhile to make a fuss over the fact that the Eternal features a single DD. In a sense, it feels like a return to basics.

So, satisfied with the visuals of the Eternal, I put them in my ears. Initially I was apprehensive about the sheer size of the Eternal, especially because my ears are pretty oddly-shaped and have “rejected” plenty of IEMs in the past.

I was right to be apprehensive – the Eternal do not fit me.

To be more specific, my ears are slightly differently shaped from one another – my right pinna lies slightly flatter against my head, and it is the right unit that gives me more trouble with fit.

I find that the nozzle is at such an angle relative to the body of the IEM that the driver capsule always hangs out of my ear rather than finding purchase on my pinna. It slowly drags the nozzle out of my ear canal, regardless if I’m walking around or sitting still.

Wearing the Eternal on my daily commute results in a constant struggle to keep them in my ears. Eventually I gave up and resolved to only use them at home.

Of course, it’s not like everyone will encounter this issue, but (like most IEMs, frankly) I would only buy the Eternal on a generous return policy. Try before you buy.

For the most part, the Eternal offer an even, balanced, and inoffensive sound signature, somewhat akin to the Etymotic ER2XR. The result is a tone that belongs in the Sennheiser HD580 school of tuning, with an emphasis on upper midrange but an overall warm treble.

The main difference here is that there’s a large spike at around 6kHz, leading to a thinner, glassier sound than their more neutral cousins.

While I love the HD580 and similar tonalities, 7Hz is by no means the first company to attempt this sound signature in an IEM. Moondrop, Etymotic, and plenty of others have offerings that go for a neutral signature.

Nor is the Eternal the first product to have a sizable 6kHz peak: the Sennheiser HD800 is perhaps the best-known example of a pair of headphones that boosts 6kHz for clarity, but those headphones have significantly less upper midrange to balance things out.

So, there is some question about whether the Eternal can be considered neutral, but let’s give them the benefit of the doubt. If they are neutral, they put themselves in thick competition. In my mind, this competition is to be won with technical ability, and on this front the Eternal do well enough, but perhaps not outstandingly well.

Like the HD580, the Eternal take the jack-of-all-trades-master-of-none approach that can be so successful in audio design. But in a crowded market, they prove to be just one of several products (the Moondrop Blessing 2 and the LZ A7 come to mind) that could fill this role.

The Eternal do have that 14.5mm driver, so one would perhaps expect larger-than-life bass with a lot of slam. Certainly, the bass is boosted, but the midbass is featured more prominently than the subbass, lending the earphones an overall “rubbery” tone in the bass region.

It’s not as unpleasant as it sounds, but the bass could be done better.

The result is no noticeable bleed into the midrange, but I do find that the thick bass combined with the thin tone of the midrange (to be discussed later) creates an odd “cupped” sound to the earphones that I could live without.

As a neutrally-tuned pair of IEMs, one would hope that the Eternal deliver a realistic timbre for instruments and vocals alike. In certain circumstances, they do, but in others, there are issues.

The lower midrange is on the leaner side, lending the Eternal a sound that is less intimate and more “no-comment” – though the boosted bass still lends some thickness to the mix. It’s not as if they sound unbalanced at all, but the thick bass combined with the thin midrange lend them that “cupped” quality I mentioned.

The upper midrange is more pronounced and can occasionally become harsh, especially when the earphones are under-amplified or running off a poor source. Listening to the Eternal running off my phone (a Galaxy S10) was an unpleasant experience and they’re best paired with a warmer source to counteract the upper midrange.

Although I greatly enjoy some leaner-sounding IEMs, the bass boost combined with the lower-midrange suckout creates a timbre that I find unpleasant and boxy. It’s fairly subtle, but it’s there on many tracks.

The treble continues the Sennheiser theme: I wouldn’t blame someone for finding these IEMs slightly “veiled.” Although the lower treble is emphasized along with the upper midrange, things quickly seem to drop off in the upper treble, robbing tracks of some of their bite and clarity.

This isn’t necessarily a bad thing, of course. We all know that certain headphones have pulled off this strategy with aplomb (again we come back to the Sennheisers). But the boosted upper midrange here creates too much harshness for me to find these IEMs pleasantly warm.

They sound confined and lacking in refinement.

Unfortunately, resolution is not best-in-class either. They have enough resolution to accurately portray all the instruments, but frankly I’d say it’s roughly on par with the Etymotic ER2 series – not quite cutting it for the price.

Imaging suffers along with the resolution. Often, subtle position cues are lost in the mix and so the stereo image becomes a bit vague as a result. Of course, they are hardly the only IEMs in this price range with this problem, but the Eternal are notably below average.

Coming off the massive success that was the Timeless, 7Hz launched another single-driver specialist. Unfortunately, I find the Eternal slightly lackluster for the price.

There are certainly areas where the Eternal shine. They look great, and the midrange is not terrible, adopting a rough diffuse-field curve to good effect. But the rubbery bass and confined-sounding treble let them down: this is not best-in-class sound, unfortunately.

Fit can also be an issue, given that the capsules are so large, but this will only apply to certain individuals, and those for whom fit is typically not an issue should certainly feel free to give these a look.

If you decide to go for a pair of Eternal, just make sure you have decent amplification on hand – the large drivers mean this pair of IEMs will take whatever power you can offer!