The Z12 are a slightly re-tuned version of the Letshuoer S12, with a striking color scheme as a bonus.

Thank you to HiFiGo for providing the Letshuoer Z12 for review purposes.

Reviewer collaborations are all the rage nowadays. What started as a way to “test-drive” the ideal tuning of some popular reviewers has now become an entire product line.

Zeos from ZReviews is one of the most popular reviewers out there, and Letshuoer decided to take his input to tweak the popular S12 planar magnetic IEMs. The color scheme has been updated along with the stock cable. 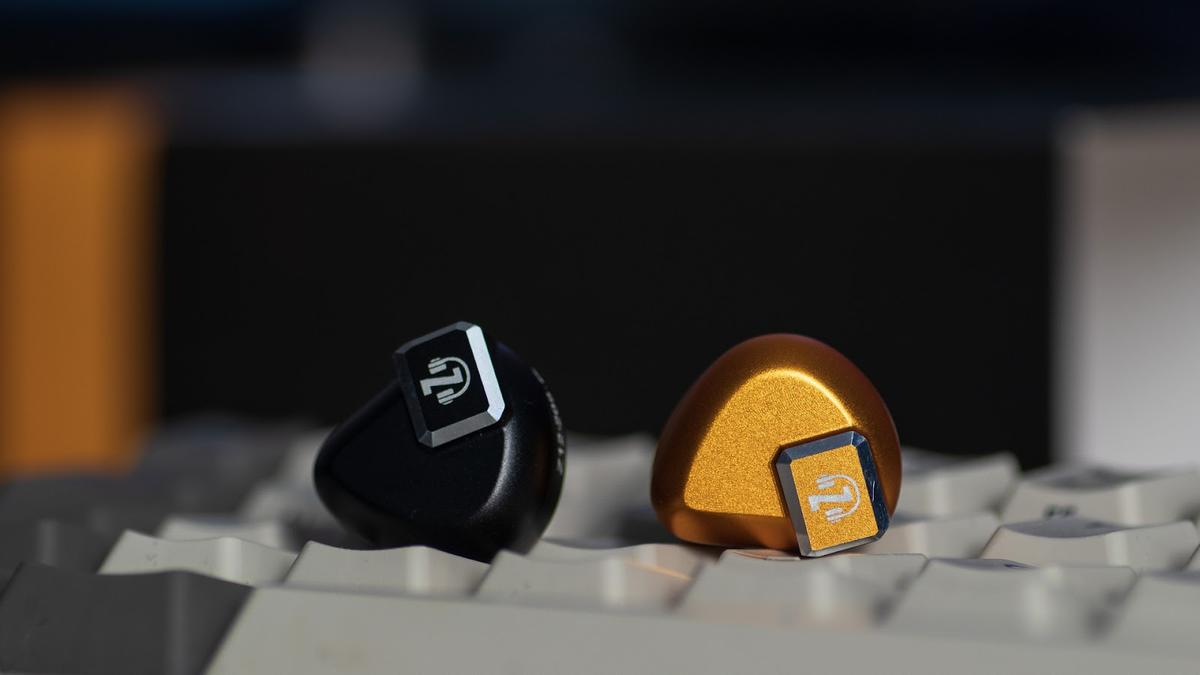 Letshuoer Z12 targets those who like some extra dose of bass and added presence in the treble. It’s an unabashedly colored signature, but it works for the most part with modern pop and rock tracks. I just wish the tuning changes were more than just a couple of dB of bass boost. As far as collaborations go, the Letshuoer Z12 is fairly vanilla, with the color scheme adding most of the glamor. Existing S12 owners need not apply, while those in the hunt for something different just might find their pick with the Z12.

Let’s see how it all stacks up and if the Z12 can differentiate themselves enough from the originals.

The Z12 arrive in a compact box that depicts the gold-black color scheme of these special “Gold Edition” IEMs.

I usually need to tip-roll IEMs, but on the Z12 the stock tips are good enough. The foam tips are a good match as they soak up some extra treble.

The carrying case has an extra pocket to hold additional tips or terminations for the modular cable. Not the most pocket-friendly case, but it offers good protection.

The stock cable (named “Chimera”) is a 4-core silver-plated copper cable with heavy sheathing. It feels substantial in hand, and I like the pre-applied ear guides which have the right amount of tension.

Unfortunately, the modular system needs to be more robust for frequent termination changes.

The 4.4mm plug on my unit has developed connection issues after just a few weeks. This is likely caused by the female connector of the hot-swap mechanism having a shorter length than competing designs.

Overall build quality is exceptional, with the gold color adding an extra dose of flair.

Letshuoer kept the same chassis design of their previous S12 IEMs with the Z12. The only differentiating factor is the laser-etched Zeos logo atop the 2-pin connectors.

There are two vents: one beneath the 2-pin connectors and another on the inner side of the IEMs.

The CNC aluminum body with anodized shells feels durable, and overall fit and finish belie their low price tag. Subtleties like the machining marks around the Zeos logo add to the appeal.

The Z12 is the most ergonomic of the current large-diaphragm planar magnetic IEMs.

Comfort is excellent as a result, and isolation is above-average with the foam tips. The silicone tips are not as isolating.

The Z12 use a 14.8mm planar magnetic driver with a dual-sided magnet array.

Since this particular driver type has become popular lately, companies differentiate themselves via various damping schemes that add an audible difference in the sound and overall tuning.

The following sound impressions are formed with stock wide-bore tips, stock cable, and a Questyle CMA-400i as the source. Test tracks are available on Tidal as a playlist.

The Letshuoer Z12 have a V-shaped tuning with a noticeable focus on sub-bass frequencies.

Zeos suggested adding 2dB of extra boost under 50Hz, which is the sole difference between the Z12 and S12 tuning. This sub-bass focus can get too much at times, for me, at least.

So far, so good. The catch is in the subtleties. The bass lacks texture as the sub-bass hum dominates the scene. Snare hits have a dampened leading edge, losing the sense of naturalness.

Most of these issues can be solved via EQ if you turn down the somewhat excessive (+10dB over lower-mids) boost below 100Hz. Then again, this extra bass adds to the “fun factor.” Nonetheless, the driver is capable enough to handle such EQ, so I encourage testing things out.

In typical V-shaped fashion, the lower-mids take a backseat.

Male vocals sound chesty and somewhat far away in the mix. Female vocals fare a lot better with ample focus.

String instruments lack bite, as heard on Damien Rice’s Canonball. I suspect this is due to the damping scheme that rounds off the notes as a side-effect of controlling the driver response.

Nonetheless, there is no shoutiness in the mids, and the smoothed-out notes sound pleasing in the long run. I just wish the vocals were better articulated.

Treble is perhaps the most divisive aspect of the Z12.

On the plus side, the treble has good extension and energy for the price. Cymbal hits are pronounced due to the peaks between 5-8kHz. There’s another peak in the upper-treble between 15-16kHz, which adds to the airiness.

Then come the downsides. Planar timbre is noticeable throughout the treble region, characterized by a metallic “sheen” to cymbals and hi-hats. The emphasis between 5-8kHz can also add hints of sibilance.

In bassy tracks, the treble peak is less noticeable. Songs with sparse instrumentations and little sub-bass in the mix can get intense. Poorly mastered tracks further exaggerate the planar timbre. Foam tips help in this regard, but they kill the dynamics.

All of the current gen “efficient” planar magnetic driver IEMs have a narrow soundstage, which is mostly true for the Z12.

The stage feels wide at times, but that’s due to the recession in the lower-mids. In reality, cymbals and hi-hats are much closer to the listener than they should be. Stage depth is lacking too. Stage height is good, thanks to the large driver.

Familiar failings appear in imaging, too, as positional cues originate from either left or right, with little information in between. If you require precise imaging, efficient planar magnetic IEMs are probably not the way to go (Audeze’s iSine series of IEMs being the exception).

Macrodynamic punch is well reproduced, as sudden drops in bass or crescendos maintain their dramatic nature.

Microdynamics are middling, as the excessive sub-bass masks low-level details and subtle shifts in volume.

The 7Hz Timeless kickstarted the current planar hype train and are still one of the most popular pairs of planar magnetic IEMs around. In terms of build, 7Hz goes for a metal build and a more distinct circular faceplate design. Accessories are also better on the Timeless.

As for the sound, the Timeless are smoother in the treble but still maintain the same sense of resolution as the Z12. The big difference is in the bass response, with the Timeless’ bass lacking body and slam in comparison.

Staging and imaging are similarly average on the Timeless, though center imaging is even worse. The smoother treble helps the Timeless avoid fatigue in the long run, even though both IEMs exhibit planar timbre.

Tin HiFi P1 Max is another recent release priced lower than the Z12. TinHiFi opts for a resin shell instead of metal.

On paper, accessories are better on the Letshuoer Z12, but the modular cable appears to need to be more durable for frequent termination changes. Then again, the Z12 come with a good carrying case, so that’s a plus.

The P1 Max sound noticeably softer and laid-back compared to the Z12, with a flatter presentation. The resolved detail is superior on the Z12, though it’s mostly attributed to the extra treble.

Staging is also lacking on the P1 Max, but imaging is not as precise as on the Z12. Macrodynamic punch has a visceral presence on the Z12, whereas microdynamics are better rendered on the P1 Max.

The extra detail comes at the cost of fatigue on the Z12, whereas the P1 Max can be listened to all day long. As long as you can handle the bulky shells, that is.

Among these three IEMs, the Z12 are my favorite in terms of design and ergonomics.

Sonically, I recommend the Letshouer Z12 to those looking for the most exciting presentation. For a slightly more balanced tuning with the typical planar speed and resolution, the 7Hz Timeless are a good option.

The P1 Max stand out as the only laid-back planar in this comparison and should cater to audiences preferring a smoother tuning.

At this point, a similar theme is emerging across the current crop of planar magnetic IEMs.

They are all above average in terms of resolution, with the treble tuning determining the sense of resolved detail. Almost all of them have mediocre staging and imaging. Price is also similar, once you take store discounts into account.

Thus, the listener’s preference determines the winner. In that regard, Letshuoer Z12 targets those who like some extra dose of bass and added presence in the treble. It’s an unabashedly colored signature, but it works for the most part with modern pop and rock tracks.

I just wish the tuning changes were more than just a couple of dB of bass boost. As far as collaborations go, the Letshuoer Z12 is fairly vanilla, with the color scheme adding most of the glamor.

Existing S12 owners need not apply, while those in the hunt for something different just might find their pick with the Z12.