At Internationale Funkausstellung Berlin (IFA) 2017, Sony revealed several new headphone models, with three of them being a variation of Sony’s MDR-1000X model with noise-canceling functionality and in three different styles. 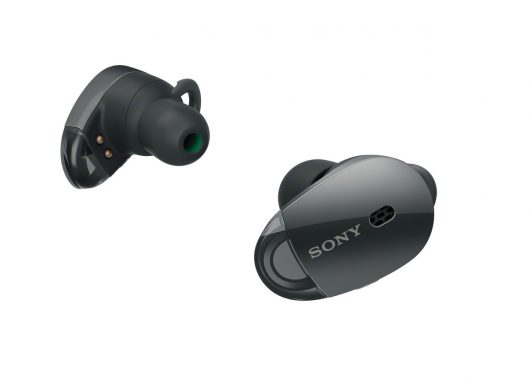 The WF-1000X is a “true wireless”1 earbuds. Described as “the star of the IFA show”, they feature a noise-canceling functionality and a 6mm driver designed for dynamic sound. The battery life only last 3 hrs but this should not come as a surprise for “true wireless” earbuds.

If you are looking for a “true wireless” earbuds with a much longer battery life, you should check out Alpha and Delta JAAP.

Just as the previous model, these, too, have the noise-canceling functionality and are wireless. However, they are not “true wireless” as you can from the cords extending down to the neckband where the batteries are stored.

The bigger battery space allows the WI-1000X to last up for 10 hours, offering a bit more flexibility (even with noise-canceling turned on). And by using a wired audio connection, they can last for up to 14 hours.

According to Sony, they feature “Atmospheric Pressure Optimising”. It has the function of adjusting the noise-canceling levels depending on the air pressure around the headphones.

The WH-1000XM2 is a wireless, over-the-ear headphones with a 40 mm driver. It can last for an impressive 30 (wireless) to 40 (with cable) hours. It is also fast-charging. A 10-minute charge can easily get you an additional 70 minutes of battery life.

It includes the noise-cancellation features together with the “Atmospheric Pressure Optimising” found in WI-1000X.

The H.ear on 2 Wireless NC headphones has a long name to go with a long list of features. These also include the noise-canceling functionality as well as touch control. You can expect to get a 28 hour worth of battery life out of them, and they’re compatible with high-res audio. They will be available in the following colors: Twilight Red, Pale Gold, Horizon Green, and Grayish Black.